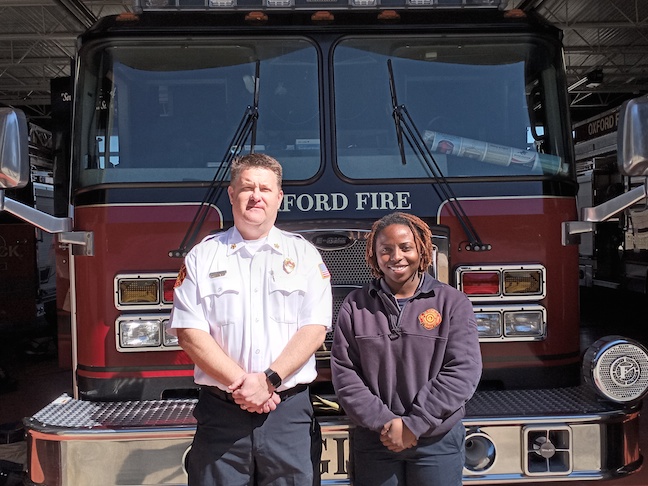 A lot of people would place importance on being the first, but for Aliyah Herod being the best is all she is focused on. And Herod considers herself at her best when she is helping others.

“I’m a person who likes to help people,” said Herod. “I first wanted to go into the Air Force but that was at the beginning of COVID so it was a really slow process. I was like I want to help people and I thought about doing firefighting but I wasn’t sure if I really wanted to do it or not.”

The time for Herod to decide came when an OFD training officer offered her the opportunity to become a firefighter.

When Herod trained to join the Oxford Fire Department, she had no idea she would become the first Black female firefighter to join the city fire department and only the third woman to officially become an OFD firefighter. She certainly didn’t expect the news to be broken to her while occupying a firetruck aerial ladder.

“When I was working — not on shift yet, just an 8 to 5— I was helping one of the guys with the ladder truck and he was like, ‘Did you know you were the first Black female firefighter?’” Herod recounted. “I said, ‘No, I did not. That’s pretty cool.’ I didn’t know about it until then.”

While Herod believed it to be cool, she kept the news to herself and her mother. To Herod, the news would not be real until she was officially a firefighter.

“I didn’t want to tell everybody because, at that time, I was not a firefighter,” said Herod. “I hadn’t been through the academy yet.” But now that she has completed her training and graduated, she said the achievement holds a lot more meaning to her than it did before. Especially since she worked hard to get where she is now.

“I’d like to be an example to show people that they can do what people tell them they can’t do or what they think they can’t do deep down when they actually can do it,” said Herod. That mindset was put to the test when Herod had to undergo the Candidate Physical Ability Test.

Every firefighter candidate has to undergo the Candidate Physical Ability Test, a pass or fail assessment that evaluates whether an individual is ready for the fire academy. The CPAT consists of eight parts designed to mirror the physical demands of being a firefighter.

When faced with the demands of the test for the first time, Herod failed.

“The first thing I noted about Aliyah was her persistence because the first time she took out PT test which at the time was a CPAT, she did not pass,” said Fire Chief Joey Gardner. “But she was persistent and came back until she did pass which showed us that this is something she wanted to to do.”

According to the chief, that persistence is a key trait.

“It’s a common trait not to pass [the CPAT], but to keep on and keep on until you do pass it?” said Gardner. “That’s something you don’t see a whole lot of.”

Herod tried again for a second time and she failed. Herod would fail three more times before taking the CPAT for the sixth time after the assessment was revised, and passed.

According to Herod, she had a lot of odds against her as a short Black woman but she managed to prove that she could do anything she put her mind to. She said it’s something her parents instilled in her and that she knows her mom and late father are proud of her.

“I tell a lot of people this because I didn’t give up and I tell people don’t give up because you will get to your goal,” she said. “This was a job that really pushed me and it’s still pushing me but I’m learning a lot.”

When Herod is not working at the fire department, she is working as a basketball coach at her alma mater Regents School of Oxford where she has found a mentee — a young girl who wants to become a firefighter like Herod herself. The student is receiving advice and helpful connections to help her achieve her goal.

“I want to encourage them that they can do it,” she said. “They just have to put their mind to it and not quit. They just have to make sure to build themselves up because not everyone is going to do it.”

Herod said she will continue to try her best, give her 110% like her mom always taught her and rise through the ranks of the department.

“I want to as high as can,” she said. “From a lieutenant to a captain to maybe a chief one day. Hopefully, I can get up to chief.”

Gardner hopes Herod’s place among the department pulls more applicants to the station. Herod could possibly encourage more Black female candidates, but at the end of the day what candidates can bring to the table matters more to Gardner than race or gender.