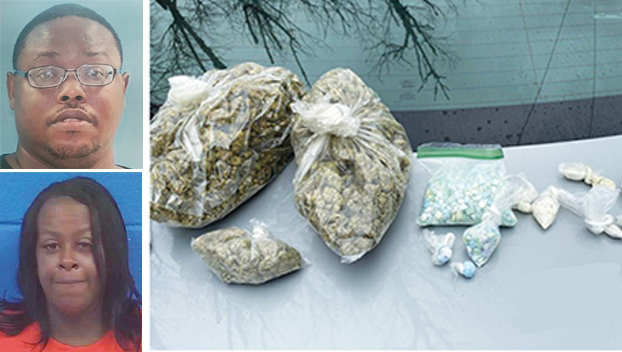 Police have arrested a Mississippi woman and are looking for another suspect in a drug bust that netted marijuana, methamphetamines, ecstasy, cocaine and other pills.

At approximately 8 a.m. Tuesday, a Brookhaven Police Department officer made a traffic stop on Drury Lane for careless driving, according to Sgt. Jonathan Hart.

After the driver of the Chevrolet Suburban pulled into the parking lot of La Rue’s Discount Drugs, the officer spoke with driver and passenger Charles Edward Thomas and Miranda M. Wilson.

The officer smelled a strong odor of marijuana coming from the vehicle and asked permission to search the SUV. Thomas agreed, but when the officer asked him to step out of the vehicle, Thomas drove off at a high rate of speed, fleeing west on Hwy. 550.

Pursuing officers lost sight of the vehicle and returned to Dr. Baker’s office to talk with Wilson.

When officers opened the door of the dentist’s office, they smelled marijuana and asked Wilson to step outside. Wilson had a black bag in her hand, which officers searched with probable cause due to the strong smell of marijuana coming from the bag, Hart said.

Officers found a large amount of marijuana in the bag, along with methamphetamines, ecstasy and cocaine. More cocaine and pills were located in Wilson’s purse, and a small bag of ecstasy was in her pocket.

Wilson, 41, of 900 Williams St. Apt. 29, was arrested and charged with felony possession of controlled substance with intent to sell, and processed into the Lincoln County Jail.

Thomas has charges pending, including felony fleeing. He is asked to turn himself in to BPD.

Chief Kenneth Collins expressed his thanks to the officers “for coming into work and doing their job by serving and protecting the City of Brookhaven.”