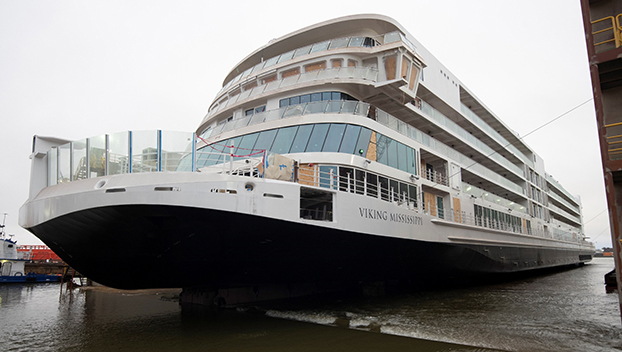 Photo of the float out Monday in Houma, Louisiana, courtesy of Viking.

Viking Mississippi, which is planned to sail along the Mississippi River in June 2022, floated out into Louisiana water on Monday, marking a major construction milestone for Viking’s newest vessel and the first time the ship has touched water.

The vessel measures 450 feet in length and is 75 feet wide with a total of five decks. Viking is calling it the largest and most modern cruise ship operating in the region.

“It is a proud moment that this new ship has met an American waterway for the first time,” said Torstein Hagen, Chairman of Viking. “Our guests have long wanted to sail the Mississippi River with Viking, and we very much look forward to welcoming them on board this summer. We are grateful to our American partner, Edison Chouest Offshore, who has helped bring to life our vision of exploring the Mississippi in the ‘Viking way.’”

The traditional float out took place at Edison Chouest Offshore’s LaShip shipyard in Houma, Louisiana. A float out denotes a ship moving into its final stage of construction.

In keeping with maritime tradition, the ship’s ceremonial godmother, Dionne Chouest, General Counsel of Edison Chouest Offshore, assisted with the float out.

The company says Viking’s arrival to the Mississippi will represent their major commitment to tourism and economic development in many communities along the river, with the new voyages expected to bring more than 7,500 guests to the region in 2022 and 17,600 plus guests during the first full sailing season in 2023.

Inspired by Viking’s award-winning river and ocean ships, Viking Mississippi will feature elegant Scandinavian design as well as public spaces that are familiar to Viking guests but reimagined for Mississippi River voyages.

The Viking Mississippi will also feature a two-story “Explorers’ Lounge” near the bow of the ship with floor-to-ceiling windows that open to an outdoor seating area at the front of the ship where guests can relax and enjoy riverside views; an indoor and outdoor dining venue on the top deck; a sun terrace with a glass-backed infinity pool; and a library, restaurant and “living room” on Deck 1 designed for socializing, relaxing and entertainment surrounded by a 360-degree promenade deck allowing guests to stroll the entire outside of the ship.