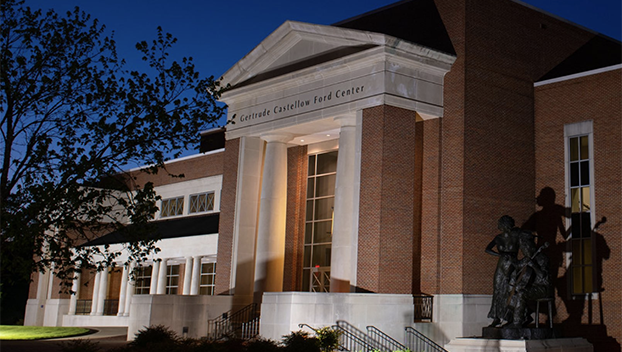 When Jenny Anderson graduated from the University of Mississippi more than a decade ago, she had no idea that her career path would include photographing Broadway stars and Oscar-nominated actors and actresses.

“When I was younger, my dad was an artist and art teacher. My mom was a performer in theater productions,” Anderson said. “I’ve been steeped in theater, books and photography since an early age.”

More than 14 years of Anderson’s work as a Broadway and freelance photographer is on display in the Gertrude C. Ford Center for the Performing Arts at the University of Mississippi.

Titled “The In Between: Intimate & Candid Moments of Broadway’s Stars,” the display comprises 45 images, which span the entirety of Anderson’s storied career. Some stars featured throughout the gallery are Megan Hilty, Glenn Close, Lin-Manuel Miranda, Vanessa Williams, Tom Hiddleston and Sierra Boggess.

The exhibit opened on Jan. 28 and will run at least until the end of the spring semester.

Anderson received her bachelor’s degree in journalism and wrote and produced news for the Daily Mississippian while she was a student at Ole Miss. After graduating, Anderson moved to New York City, where she interned and later worked as a full-time employee for Broadway.com.

Anderson said that although she’s been photographing Broadway shows and stars for nearly 15 years, she had yet to see her work on display until it debuted at the Ford Center.

“It spans the 14 years pretty well,” Anderson said of the exhibit.

Anderson is a full-time resident of New York City, but she still maintains her Mississippi roots. Her parents live in the Oxford area, and she visits often. She recently came to the University of Mississippi campus to see her artwork unveiled this year.

“My former professor, Ellen Meachum, was my advisor when we did the Daily Mississippian in college,” said Anderson. “She’s been a part of my career for years and has always been supportive of and a mentor to me.”
About two years ago, Meachum connected Anderson with her sister, Kate Meachum, who oversees marketing for the Ford Center.

“Kate said she’d love for me to put up a show at the Ford Center,” Anderson said.

The show was originally to debut in 2020, but was pushed back several times because of the coronavirus pandemic.
Kate Meachum said that, as a theater where national tours and Broadway shows come through, it is special to have photos from shows that will eventually tour at the Ford Center.

“The connection to Broadway and theater is something we were interested in,” Meachum said.

Anderson said that this show is mainly composed of backstage moments at theaters and the Tony Awards.

“It’s the in-between moments before they go onstage or get into costume,” she said.

Since Broadway was shutdown during the COVID-19 pandemic, Anderson instead shot for ABC morning shows including LIVE with Kelly and Ryan and The View. She also had the opportunity to cover election night in 2020 and the presidential inauguration in early 2021.

The exhibit is free and open to the public during operating hours for the Ford Center.

Mississippi governor: Logjam on tax cut could force a…