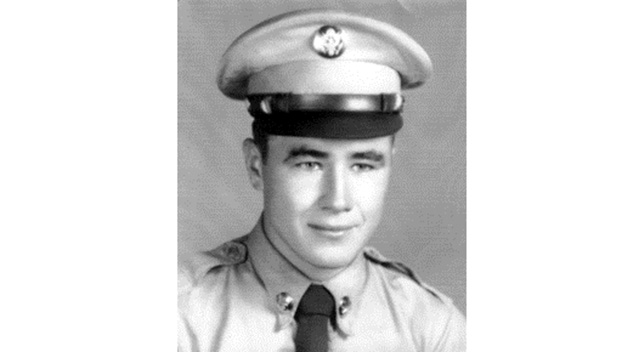 A reading space in Ripley Elementary School’s library has been dedicated in memory of a fallen soldier from Tippah County.

Students, school officials and representatives of the 6.25 Foundation dedicated space in the library this month to the memory of Cpl. Ernest Edgar Basham, who died while serving in the Korean War.

A group of students sat on the floor in the library for the unveiling of the plaque and acceptance of a $5,033 check from the 6.25 Foundation. The organization was created by Sungyull Koo, 78, and his wife, Changwha Koo, 75, with a goal of honoring fallen Korean War soldiers and furthering education for children.

“Today, we as Mississippians remember and honor Cpl. Ernest Basham,” Elliott said. “May his positive example inspire us as a school, as a county, as a state and as a great nation to work hard, work together and most importantly, help and love one another.”

Basham, a light weapons assault crewman in the U.S. Army, was the youngest of 351 soldiers from Mississippi who died in the Korean War. The 18-year-old was one of the very last soldiers to die in the war when he went missing and was declared dead on July 8, 1953.

Principal Lisa Leatherman explained the importance of remembering fallen soldiers to the students attending the presentation.

The school will use the 6.25 Foundation’s donation to purchase nonfiction books for all grade levels, including second-grade level sports books, third grade level animal and science books, and second through fourth-grade level history books.

Sungyull and Changwha Koo, both natives of South Korea, were ages 6 and 3, respectively, when the Korean War began.

The idea for the 6.25 Foundation came about when the Koos ran into a couple of Korean college students while traveling in Nepal several years ago.

“While we were talking, I asked them what they thought about the Korean War,” Sungyull Koo said. “And to my big surprise, they did not really remember.”

Koo believes, as President Calvin Coolidge famously said, that “The nation which forgets its defenders will be itself forgotten.”

He and his wife have visited several Korean War memorials across the United States but wanted to create a living tribute to the soldiers who died. Ripley Elementary is the ninth school the couple has visited to establish memorials at so far. They have a goal of honoring fallen Korean War soldiers at schools in all 50 states.

They traveled to Mississippi from their home in Rupert, Vermont, to present the plaque, a check and a couple books of poetry written by Sungyull Koo in both Korean and English to the library.

“Not too many people know about the past, the war, but we think that it is very, very important for us to remember the cost, what we paid for freedom — especially when we see what is going on in Ukraine today,” Sungyull Koo said. “It is our great privilege and happiness that we are able to chip in a little bit, to help their education, to help them learn about the past so they can build on the future.”