The Substance Abuse and Mental Health Services Administration, or SAMHSA, reported that among the people who misused prescription pain relievers in 2020, nearly 65% stated that their primary reason for doing so was to relieve physical pain. The percentage of people reporting drug misuse as a reason to get high was 11.3%.

Misuse is defined as patients taking prescription medications in a way other than what has been recommended by their doctor. It might look like taking someone else’s prescription or taking one’s own at larger or more frequent doses, or for a longer period of time.

Citing data from SAMHSA, Zinnia Health identified the most commonly misused prescription drugs in the United States, all of which are opioid analgesics, or opioid pain relievers. This class of drugs acts on the central nervous system by blocking pain signals to the brain. In addition to pain relief, these drugs also intensely trigger the brain’s reward centers, releasing endorphins and creating positive feelings commonly referred to as euphoria. This is what makes prescription opioids—and all opioids, for that matter—so dangerously addictive.

Prolonged use of opioids can increase a patient’s tolerance to a particular drug. With higher tolerance, the drug becomes less effective, and patients won’t experience the same level of pain relief and feelings of euphoria, which often leads people to seek out opioids with higher potency. This could be why such a large percentage of people reported misusing prescription opioids to relieve pain. For example, a person who has misused and developed a tolerance to morphine may seek out something stronger like oxycodone or hydromorphone, the effects of which are felt more quickly and more intensely.

SAMHSA also found that nearly half of people who misused pain relievers (47.2%) reported getting these drugs from a friend or relative—by stealing, buying, or receiving them for free. Roughly 44% of people reported getting prescriptions from a healthcare provider. Drug diversion—or the disruption of a prescription drug along its legal and intended path from manufacturer to doctor to patient—is a contributing factor in drug misuse. Diversion happens through doctor shopping, theft, and forgery, among others.

The United States is in its third wave of an opioid crisis, but it is important to note this current wave is characterized by illicitly produced synthetic opioids. Overdose deaths from commonly prescribed opioids have been on the decline over the last several years. However, knowing the uses and risks associated with these drugs can be life-saving. Read on to learn the most commonly misused prescription drugs in the United States. 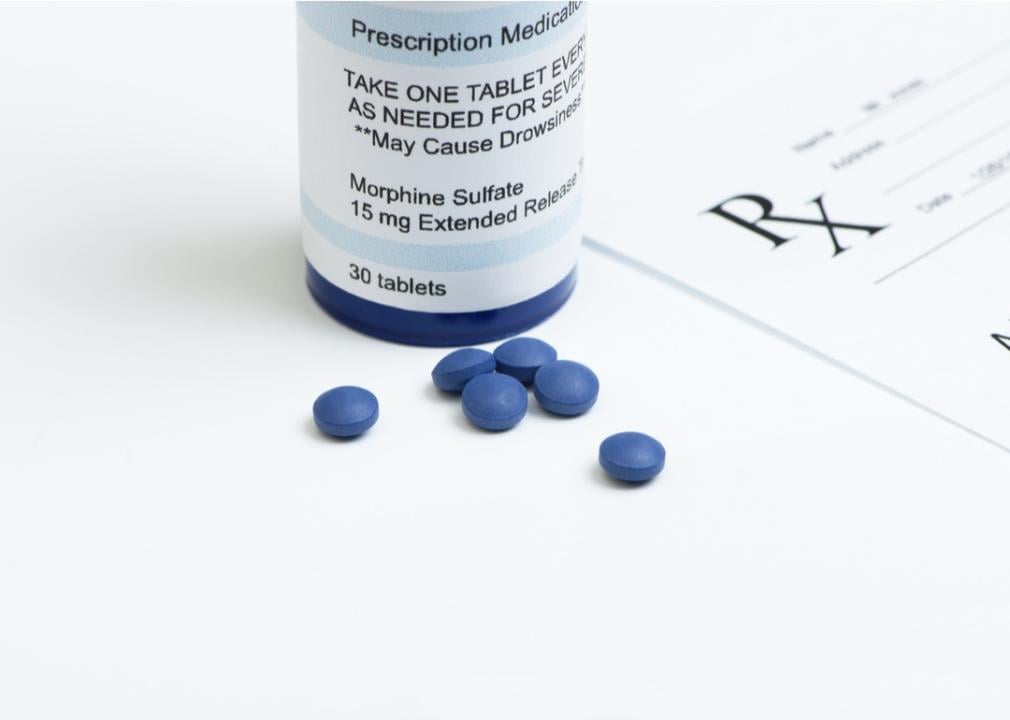 Known by its brand names Avinza or Kadian, morphine is an opioid used to treat both acute and chronic pain. While morphine can be administered intravenously, it is most commonly taken via tablet or capsule. Morphine is closely related to other analgesics like hydrocodone and oxycodone. The potency of other opioids is often determined or compared relative to morphine’s potency. 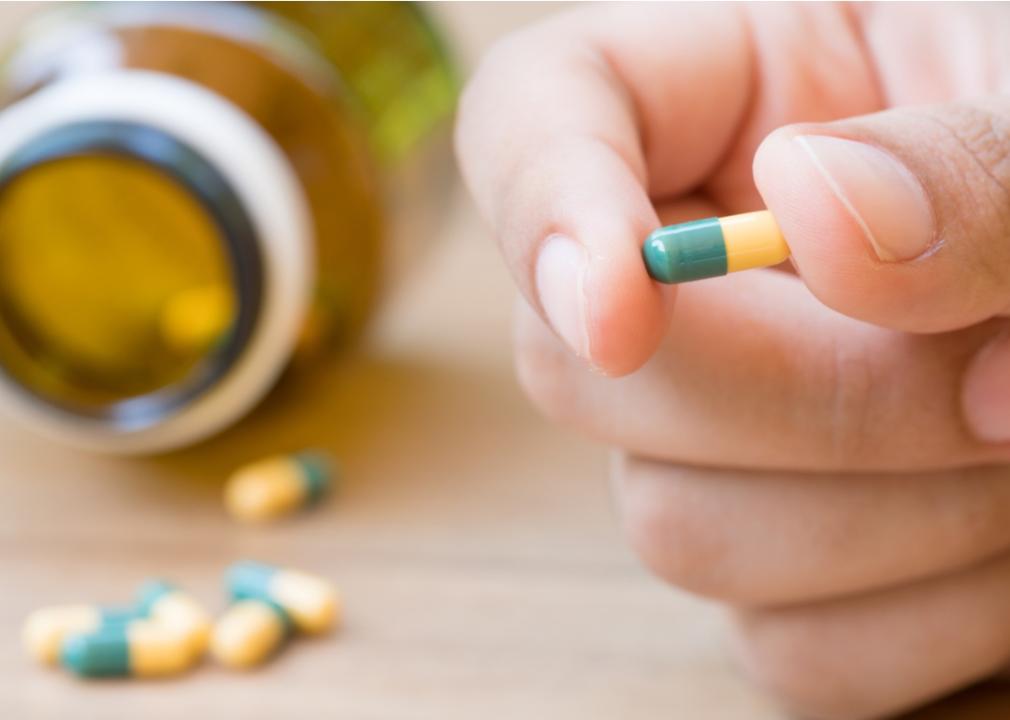 Tramadol, commonly referred to by its brand name Ultram, is a synthetic opioid used to treat moderate to severe pain, typically following a surgery. The drug is commonly prescribed as extended-release tablets to help with chronic severe pain from conditions like fibromyalgia. In 2019, an estimated 5.5 million people were prescribed Tramadol, totaling nearly 20 million prescriptions. It was the 35th most prescribed drug in the U.S. 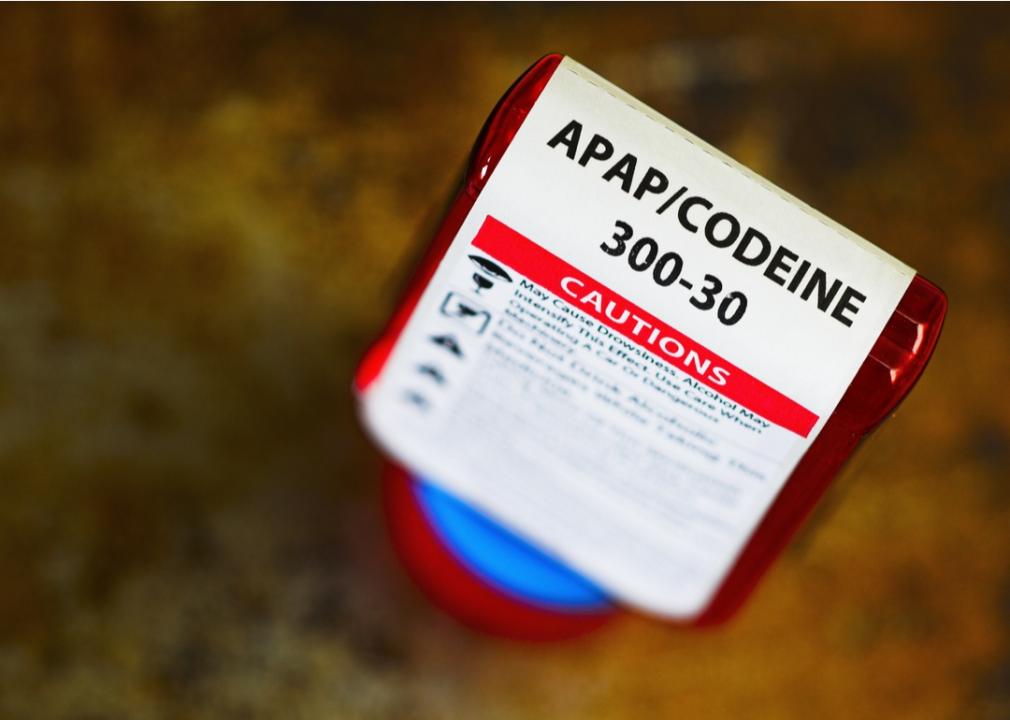 Codeine is an opioid used to treat mild to moderate pain and is most often prescribed as a cough suppressant. It can also be used to treat gastrointestinal problems like diarrhea. Because codeine is milder than other opioids, users with intentions of misuse increase dosages to achieve a greater high. Misuse of codeine can lead to the misuse of more intense opioids. 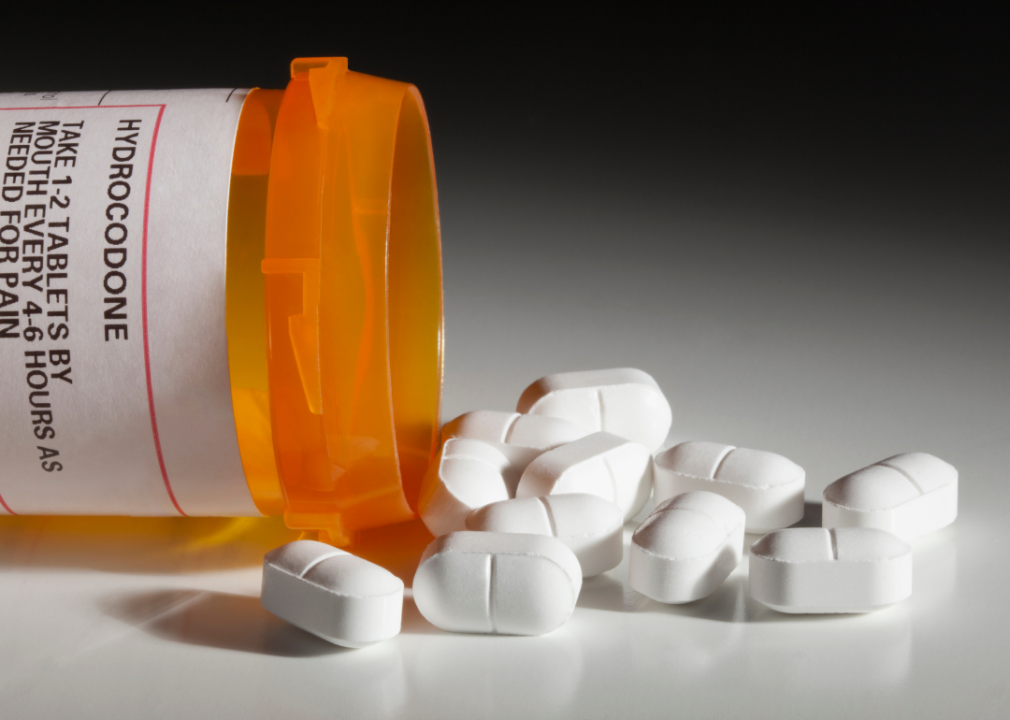 Hydrocodone is the most frequently prescribed opioid in the U.S. In 2020, 4.7 million people misused hydrocodone products, making them the most commonly misused type of prescription pain reliever that year. Hydrocodone, also known by its brand name Vicodin, is given to patients with moderate to severe pain usually following surgery or injury, or to alleviate pain associated with medical conditions such as cancer. In combination with homatropine, hydrocodone can also be used as a cough suppressant. Unlike other opioids, hydrocodone is not often illicitly manufactured and the vast majority of misused hydrocodone is pharmaceutical. 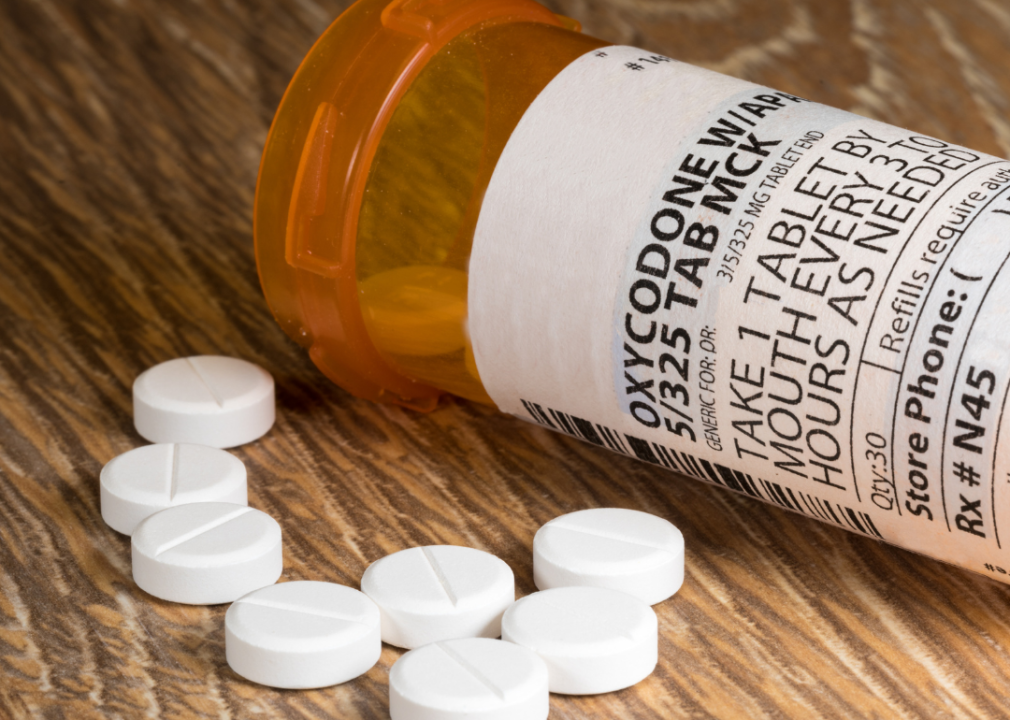 Oxycodone is an opioid prescribed to treat ongoing severe pain. OxyContin and Percocet are two of the most recognizable brands, with the former being a pure form of oxycodone and the latter a combination of oxycodone and aspirin. Roughly 3.2 million people misused oxycodone products in 2020, making it the second-most commonly misused pain reliever behind hydrocodone. Oxycodone misuse is prevalent across the spectrum of geographic, demographic, and socioeconomic conditions. 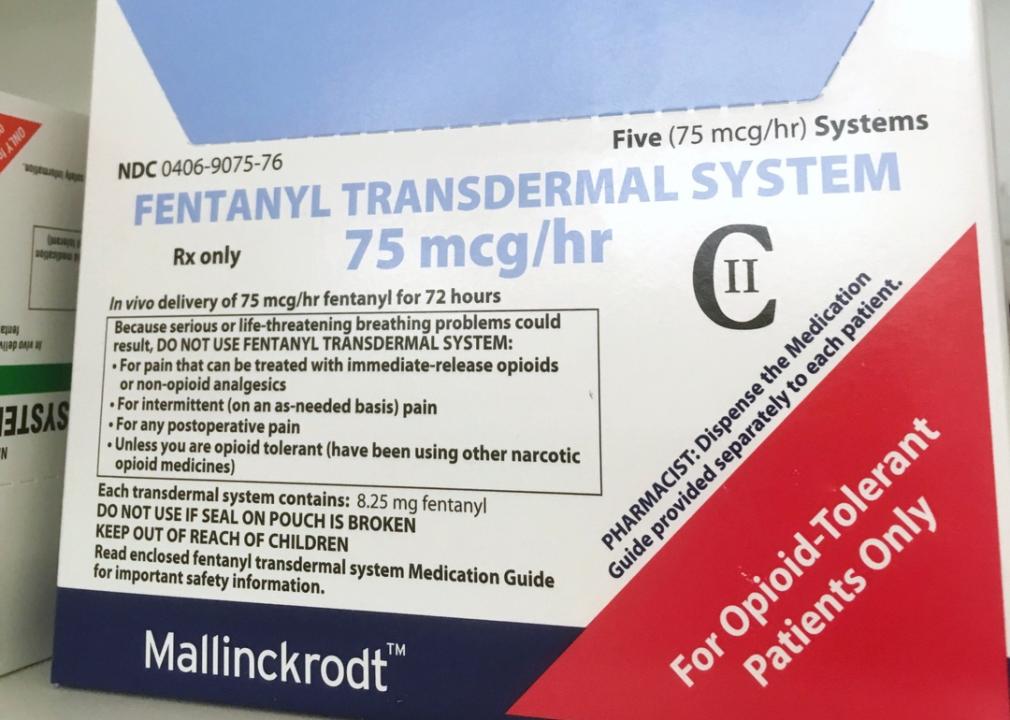 Pharmaceutical fentanyl, which this data refers to, can be up to 100 times more potent than morphine and is most often used to treat pain associated with advanced cancer. Legally produced fentanyl is typically administered through patches or lozenges. According to the Drug Enforcement Administration, misuse of these products can include ingesting the gel inside the patches or freezing the patches, cutting them into pieces, and placing them inside the cheek to absorb the contents. Because a percentage of fentanyl remains in used patches even after a three-day use, used patches are also targeted for misuse. Illegally manufactured, nonpharmaceutical fentanyl is at the heart of the third and current wave of America’s opioid epidemic. 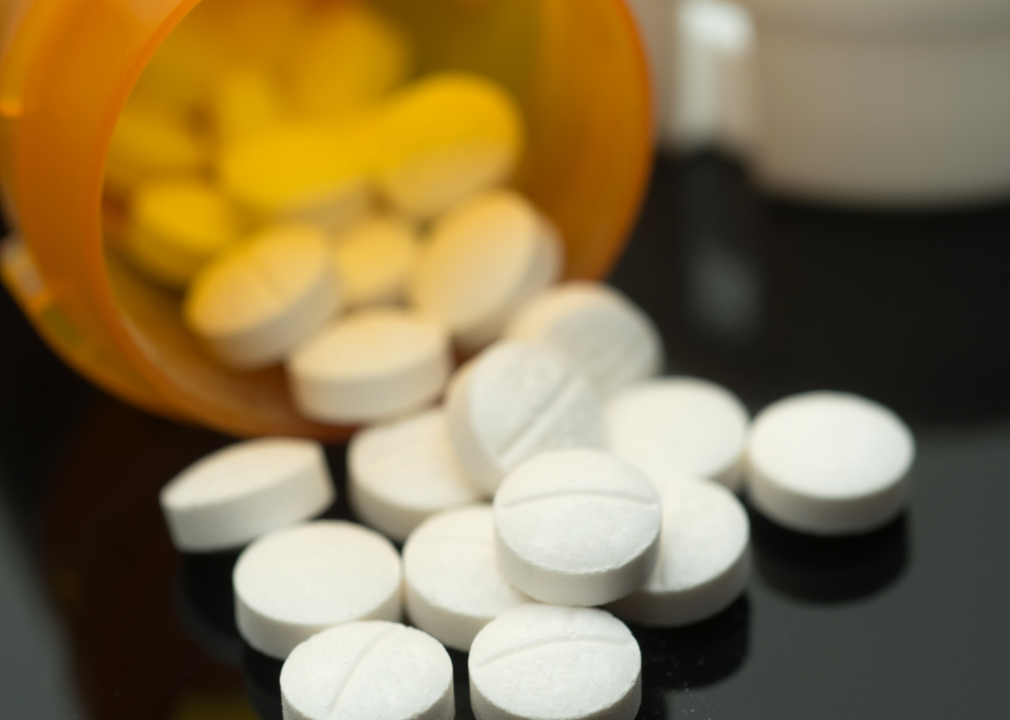 Hydromorphone, commonly referred to by brand names Dilaudid or Exalgo, is an opioid prescribed to treat severe pain in patients who are resistant to less potent opioids. It is roughly eight times stronger than morphine, and the effects of a 1-2mg dose can be felt in as little as 15 minutes. Hydromorphone carries a high risk of addiction and is prescribed only in certain medical circumstances, like managing pain from cancer or cancer-related treatment. According to the Drug Enforcement Administration, hydromorphone used to be the most commonly misused or diverted drug, now supplanted by oxycodone and hydrocodone. 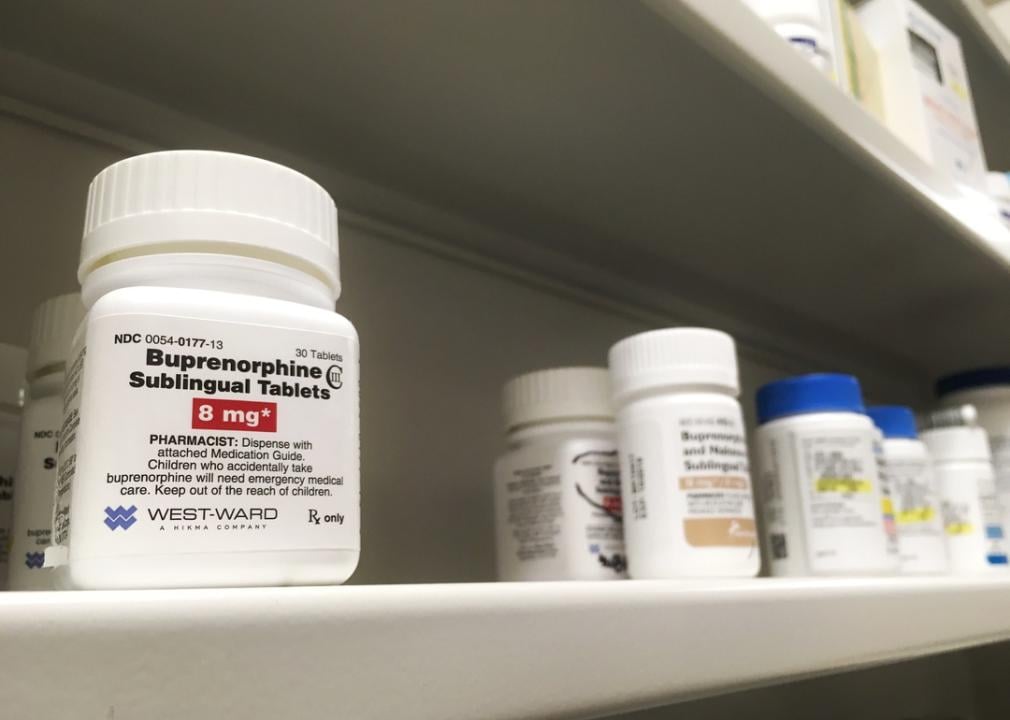 Buprenorphine is an opioid used in the medication-assisted treatment of opioid use disorder, or OUD, particularly to reduce intense withdrawal symptoms that can lead to relapse. It works by stimulating the brain in the same way as heroin or methadone, but to a lesser degree, creating a limit to its effects. It can produce euphoria without the risk of suppressing breathing, which is the actual cause of death in opioid overdoses. Since prolonged opioid use inhibits the brain’s ability to produce dopamine on its own, the right dosage of buprenorphine and a comprehensive treatment plan allows OUD patients to feel “normal” or at equilibrium.