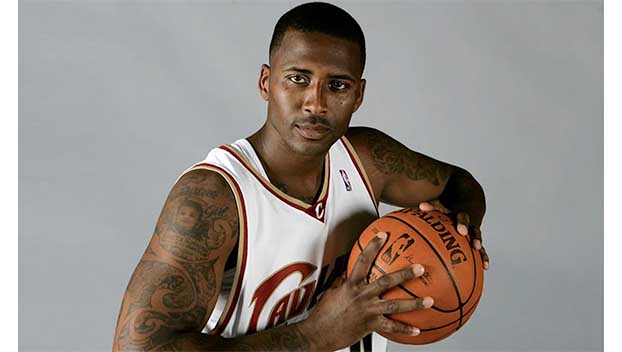 The gunshot-filled 911 call came into a Tennessee police department just after midnight on July 19, 2010, from the cell phone of retired NBA player Lorenzen Wright.

Wright was lured to a road next to a field by his ex-wife and another man charged with killing him, prosecutor Paul Hagerman told a jury Tuesday. Wright’s call had reached the police department in Germantown, a suburb of Memphis, and the pop-pop-pop of gunshots rang out over the line.

“Hello? Hello? … Nothing but gunshots,” the dispatcher said. Then the line went dead.

The phone call was played Tuesday during the prosecutor’s opening statements in the trial of Billy Ray Turner, who is accused of conspiring with Wright’s ex-wife to kill him. Turner has pleaded not guilty to charges of first-degree murder, attempted murder and conspiracy in the death of Wright, a Memphis native and a 6-foot, 11-inch center who played for five teams over 13 seasons.

Wright’s slaying is one of the most highly publicized murder cases in Memphis history. His decomposing body was found riddled with bullet wounds in a swampy field in east Memphis on July 28, 2010 — nine days after he placed the 911 call.

Turner, a landscaper who lived in the Memphis suburb of Collierville, knew Wright’s ex-wife, Sherra Wright, from church. Turner was Sherra Wright’s “romantic secret interest,” and she recruited Turner and her cousin, Jimmie Martin, to help her kill her 34-year-old ex-husband, said Hagerman, the prosecutor.

Sherra Wright entered a surprise guilty plea to the facilitation of murder in July 2019 and Judge Lee Coffee sentenced her to 30 years in prison. Coffee also is presiding over Turner’s trial.

Sherra Wright planned the killing, lured Lorenzen Wright to the field where the father of six was shot, and covered up the crime, Hagerman said.

“It took an evil heart to do this,” Hagerman said.

In reference to the ominous 911 call, Hagerman noted that Germantown police failed to follow up on it. If they had, they would have found Wright’s body and evidence left at the shooting scene, including a handgun, bullet casings and barbed wire fencing that had blood on it, the prosecutor said.

At the time, dispatchers said they didn’t alert patrol officers or commanders because they couldn’t confirm it came from their jurisdiction.

Investigators took action after Wright was reported missing by his mother days after her son was killed, giving those responsible time to cover their tracks, Hagerman said.

Investigators slowly pieced together evidence before Sherra Wright and Turner were indicted in December 2017 — more than seven years after the killing. Detectives spoke with Martin, who is serving a prison sentence for fatally shooting his girlfriend after Lorenzen Wright was killed.

Martin has not been charged with Lorenzen Wright’s killing. According to an affidavit, Martin told investigators that Sherra Wright masterminded a plan to have her ex-husband killed at his home in Atlanta, but that attempt failed.

Martin helped Turner and Sherra Wright clean the crime scene, saying that the gun used in the killing was dumped in a north Mississippi lake, according to the prosecutor. Hagerman showed the jury the gun, which was found by FBI divers in 2017.

Defense attorney John Keith Perry tried to poke holes in the state’s story by casting doubt about Turner involvement and whether he and Sherra Wright were in a secret romance. Perry said Turner, 51, had led an honest life — owning his own business and regularly attending church — after he served jail time when he was a young man for felony convictions.

Perry also questioned the credibility of Martin, saying the information he gave to investigators after he was convicted was a farce and full of lies.

During his opening statement, Perry said Martin was “the type of person who changes facts like a person changes drawers — underwear, excuse me.”

Sherra Wright did receive $1 million from her ex-husband’s life insurance policy, and settled a court dispute in 2014 over how she spent the insurance money meant to benefit their six children, The Commercial Appeal has reported.

Wright played for the Los Angeles Clippers, Atlanta, Memphis, Sacramento and Cleveland from 1996 through 2009. averaging eight points and 6.4 rebounds per game. He also starred at the University of Memphis.

The trial is expected to take a week to 10 days. The jury is being sequestered.