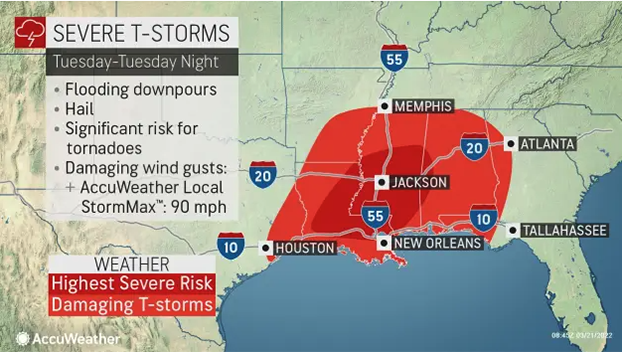 AccuWeather meteorologists are urging residents across the South to remain weather aware early this week as confidence increases in an outbreak of severe weather and tornadoes — perhaps one of the most volatile events so far in 2022. Forecasters say this particular setup has the potential to produce strong and long-lived tornadoes, some of which can occur under the cover of darkness.

A large storm is forecast to unfold during the first days of spring that will cover nearly the entire country with a variety of impacts ranging from a widespread damaging thunderstorm and tornado risk, flash flooding and even blizzard conditions, forecasters say.

The National Weather Service’s Storm Prediction Center (SPC) has already put nearly 2 million people under a “moderate” risk for severe weather on Tuesday and Tuesday night. Under this risk category, widespread severe storms, which can be intense and long-lived, are likely.

“We are watching a potentially dangerous severe weather situation early this week that could cause widespread flooding, large hail, the threat of tornadoes, high winds and power outages. This is a volatile weather pattern, and we’ve seen these types of storm systems previously produce damaging, dangerous and highly impactful severe weather and flooding,” AccuWeather Chief Meteorologist Jonathan Porter said.

The storm, which arrived on the Pacific coast Saturday, will take nearly all of this week to travel from the Rockies and Plains to the Atlantic coast, resulting in significant ground travel, shipping and airline delays.

Residents from Oklahoma and Texas to Mississippi and Alabama are encouraged to review safety steps and make sure they have a sturdy shelter identified ahead of time in the event of a tornado warning or damaging straight-line wind event.

“As the storm intensifies Monday, severe weather is expected to erupt ahead and along a cold front, first Monday afternoon and evening in central and eastern portions of Texas and Oklahoma and progress eastward later Monday night into parts of Arkansas and Louisiana,” AccuWeather Meteorologist Nicole LoBiondo said.

The most volatile thunderstorms may ignite south of Oklahoma City, with Dallas, Waco, Tyler and Houston, Texas, expected to lie within the heart of the severe weather risk zone. Other cities at risk include Shreveport and Alexandria, Louisiana.

All facets of severe weather, including tornadoes, damaging wind gusts to an AccuWeather Local StormMax™ of 90 mph, large hail and downpours, are expected to be in play.

AccuWeather Lead Storm Warning Meteorologist Mike Youman noted that thunderstorms during the morning hours on Monday across portions of western and central Texas may complicate matters later in the day. However, he said that there should be enough sunshine to heat the ground and energize the atmosphere beginning near the Interstate 35 corridor in Texas to trigger severe thunderstorms.

“Any tornadoes will be difficult to see due to the messy and widespread nature of the shower and thunderstorm activity that is expected to coincide with the severe storms, as well as the fast forward speed expected with these storms. Most storms will be moving at speeds in excess of 50 mph, so anybody that gets pinged for a severe thunderstorm warning or a tornado warning will have less time to react to get to shelter before impacts are being realized,” Youman said.

During Tuesday and Tuesday night, the prime threat of severe weather is likely to shift from Texas into Mississippi and Alabama. It is within this zone and timeframe that forecasters say that the greatest risk for tornadoes is expected to evolve over the course of the storm’s entire journey across the country.

Communities that need to be on alert for volatile thunderstorms include Tupelo and Jackson, Mississippi; Baton Rouge and New Orleans, Louisiana; and Tuscaloosa, Atlanta and Birmingham, Alabama. Motorists on stretches of interstates 10, 20 and 55 will not only need to be watchful for rapidly changing weather conditions but also fallen trees or other debris blocking the roadway.

Given the potential for severe weather to linger after dark on both Monday and Tuesday, AccuWeather meteorologists urge residents to keep cell phones on and fully charged with the volume turned up and severe weather alerts enabled before heading to bed. A weather radio can also be a potentially life-saving option to receive vital weather warnings.

“Darkness will only make things harder to spot when combined with the fast storm motion and the widespread storm coverage,” Youman said, adding that residents would want to remain “extra vigilant.”

There is another aspect of the storm that is also worth paying attention to and preparing for — flooding.

“While the severe weather threat will understandably receive extra attention, I want to stress that the biggest impact from this storm may come from the flooding risk because repeated bouts of heavy rainfall can occur over the same areas, increasing the risk for flooding. Additionally, parts of the Ohio and Tennessee valleys have seen extensive rainfall in recent weeks and have been dealing with river levels that are just now coming down from previous flooding issues,” Porter said.

Any rain in these water-logged areas is unneeded and can quickly cause incidents of flash, urban and small stream flooding.

About 2-4 inches of rain can fall from northeastern Texas and eastern Oklahoma to central Alabama and into Tennessee and Kentucky during the first half the week, with an AccuWeather Local StormMax™ of 8 inches.

Earlier last week, a thunderstorm dumped 1-2 inches of rain in an hour’s time and turned streets into torrents of water in Birmingham, Alabama. Alabama and neighboring parts of the Florida Panhandle are also still recovering from severe weather at the end of last week, which left several communities destroyed from possible tornadoes.

AccuWeather meteorologists will closely monitor the potential for the severe weather threat to target the mid-Atlantic and Southeast coasts during the middle of the week as the storm system moves along.

At this early stage, the corridor from near the Delmarva Peninsula to the Florida Panhandle could be at risk for storms producing torrential downpours, damaging wind gusts and isolated tornadoes on Wednesday into Wednesday night.

The speed of the storm at this point in its journey will determine the exact coverage and severity of thunderstorms before they clear the Eastern Seaboard.

Severe weather is still expected tomorrow, which could be a significant event. Damaging winds, tornadoes(some possibly strong) and hail are all likely. Flooding is also possible across the area. Strong winds outside of the storms will occur tomorrow as well. pic.twitter.com/AfJwJdQeAn