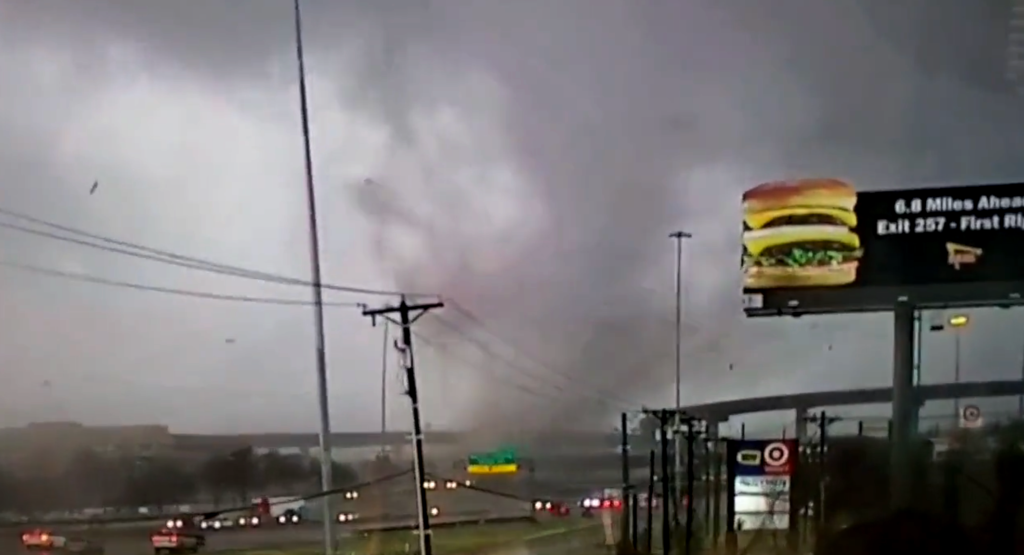 Video footage of tornado in Round Rock Texas Monday.

A storm system that left widespread damage and some injuries in its wake in Texas drifted into Louisiana, Mississippi and Alabama on Tuesday, possibly triggering “a regional severe weather outbreak,” the Storm Prediction Center said.

The affected areas, including the cities of Baton Rouge and Jackson, Mississippi, could see strong tornadoes, forecasters said.
Louisiana’s federal and state authorities reminded thousands of hurricane survivors living in government-provided mobile homes and recreational vehicle trailers to have an evacuation plan because the structures might not withstand the expected weather.

More than 8,000 households live in such temporary quarters, Bob Howard, spokesman for a joint information center for the Federal Emergency Management Agency and the Louisiana Governor’s Office of Homeland Security and Emergency Preparedness, said Monday.

In a joint statement, the agencies said floods might cause the most damage.

“Repeated bouts of heavy rainfall can occur over the same areas, increasing the risk for flooding,” the statement said. “Move to higher ground if you hear of flood warnings.”

Tornado crossing over I-35 in Round Rock. Packed interstate. This is bad. #txwx pic.twitter.com/KJFMMVV28t

Nearly 1,800 households in trailers provided directly by FEMA are unable to return yet to homes damaged or destroyed by hurricanes Laura and Delta in 2020, according to a news release last week. Another 1,600 trailers were deployed for Hurricane Ida’s displaced households, Howard said, and Louisiana has set out more than 4,400 RV trailers for Ida’s victims under a test program paid for by FEMA.

Anyone living in state or FEMA temporary housing needs to keep cellphones on and fully charged, with the volume high and severe weather alerts enabled, the agencies said.

“The danger is expected to be highest at night,” they added.

The release noted that the mobile homes and RV trailers are government property that cannot be moved.

Officials reported damage throughout Jacksboro, about 60 miles (100 kilometers) northwest of Fort Worth. There, photographs posted on social media showed a storm ripped the wall and roof from parts of Jacksboro High School, especially its gym.

The storm also struck the city’s animal shelter, but the amount of damage wasn’t immediately clear.

Thirty miles (50 kilometers) northeast of Jacksboro, near Bowie, the damage was reportedly widespread, with reports of some people trapped in collapsed structures. City manager Bert Cunningham said the worst damage was east of the town, with as many as four entrapments reported. Four people suffered minor injuries, said Emergency Manager Kelly McNabb.

Texas Gov. Greg Abbott said during a news conference Monday night in suburban Austin’s Williamson County that the “devastating” storms caused significant damage but the state would stand “shoulder to shoulder” with those affected, and he was thankful that there no reports of fatalities.

“We know there are many people whose lives have been completely disrupted and people who’ve lost their homes,” Abbott said. “At the very same time… it may be a miracle also, because even though there’s been some devastating physical damage, to my knowledge, as of right now, there is no report of loss of life, which is just stunning.”