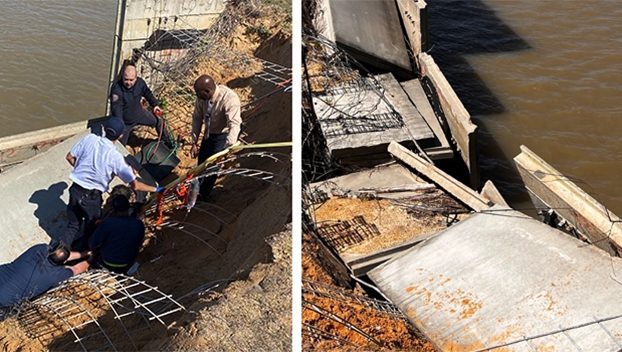 A Natchez man was apparently fishing on the Natchez bank of the Mississippi River behind the Hotel Vue when a concrete retaining wall where he had been standing collapsed on top of him. At left, first responders work to pull the man out of the debris to safety. (Left photo submitted by Natchez Police Department) At right, the wall that collapsed after the man was pulled to safety. (Right photo by Sabrina Robertson | The Natchez Democrat)

Emergency responders pulled a fisherman out from underneath several tons of concrete after a retaining wall on top of him along the Mississippi River in Natchez Thursday at approximately noon.

Traffic on US 84 by the Mississippi River bridges in Natchez stalled for almost an hour as a medical helicopter landed in the middle of the highway for the rescue of a Natchez fisherman in critical condition.

Cartrell Harris, 64, was apparently fishing on the Natchez bank of the Mississippi River behind the Hotel Vue when a concrete retaining wall where he had been standing collapsed on top of him.

He fell approximately 10 feet down towards the river where the cave-in happened and his legs were trapped in the debris.

“Detective Gibson Bates (from Natchez Police Department) was the first to have eyes on him when we arrived. We weren’t sure exactly where he was,” Natchez Police Chief Daughtry said.

Harris had a cell phone on him and called 911 just before 11 a.m. Thursday. All he could tell dispatchers was that he was behind the Hotel Vue and a wall had collapsed on him, Daughtry added.

“He called from his phone and our dispatcher kept him on the phone until we could find out what was going on.”

Knowing he was trapped and likely injured, Natchez Police and Fire Department, AMR,  Adams County Sheriff’s Office, Wildlife and Fisheries and Search and Rescue all came to his aid. Vidalia Police also helped with stopping traffic on the bridge when the medical helicopter came to land on the highway, Daughtry said.

He thanked all who responded and assisted during the rescue operation.

“It was a blessing. It could have been worse,” Daughtry said.

A helicopter landed on the hotel side of John R. Junkin Drive, stopping traffic in order to safely reach Harris and transport him to the hospital. Natchez Fire Chief Robert Arrington said he is being treated for crush syndrome, a condition caused by the cutting off of blood circulation in parts of the body, and it appears his legs were broken.

“A concrete block fell on top of his legs. It’s probably a ton or two of concrete that landed on his legs,” Arrington said. “Thank God for the sand. It was a gift and a curse. It’s soft enough that it would absorb some of the weight to stop it from crushing him.”