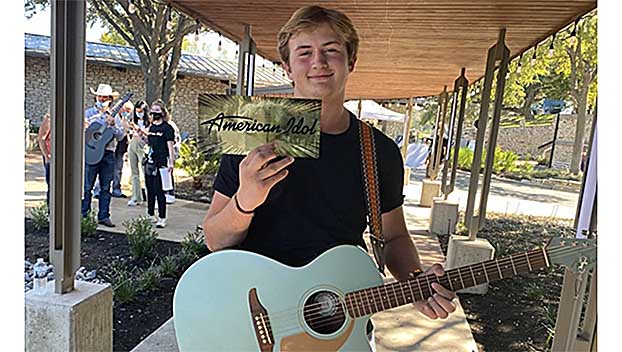 Bryce McGlothin, a soon-to-be 17-year-old Mississippi high school student, will not just be seen once during the 20th season of American Idol.

This Sunday could be the final showing of American Idol auditions after the 2022 Oscars on ABC.

While McGlothin’s air time is unclear, one thing is certain.

“I did make it through the first round, I got a golden ticket and went on to Hollywood Week,” McGlothin said, eagerly announcing a secret he has been keeping since his American Idol audition in Austin, Texas, in front of Luke Bryan, Lionel Ritchie and Katy Perry.

“It’s an honor and also very nerve-racking,” McGlothin said of facing the three big stars. “It’s fantastic but very different than performing for 500 people. … It has shown me what the music industry looks for in an artist. They gave me some constructive criticism and since then I’ve really tried to perfect my music. … The most rewarding part is meeting other contestants and getting to share stories with all of them.”

While he can’t release many details about the upcoming show, McGlothin said he is “a lot more nervous” during his second round of American Idol. Instead of performing for just the three stars, he has other contestants and their families all watching him, he said.

“These are three people just like me. I had to get that in my head,” he said. “They put you through a hard test but I had a great time.”

As for how people treat him at home in Vidalia, Louisiana, or at his high school just across the river in Natchez, Mississippi, after learning he would be seen on television screens across America, it hasn’t been all that different other than people asking “a lot of questions” that he wasn’t able to answer, McGlothin said.

McGlothin still plays gigs with the local band he and his friend Tyler Gregg started five years ago called “Easily Distracted.” They have performed on various stages in the Miss-Lou, such as the Longwood Afternoon Music Festival last October.

McGlothin said he has been singing from age 2 and he and Gregg started to seriously pursue careers in music when McGlothin was 12. Both have made strides to achieve their dream. After going through the first round of American Idol, McGlothin signed with PCG In Nashville, Tennessee, which set him up with a vocal and social media coach.

“The professionality of PCG is unbelievable. It’s topnotch and couldn’t get any better,” he said.

Gregg will also study music in Nashville with his acceptance to Belmont University.

McGlothin picked up playing the piano as a teenager and received his first guitar for his 14th birthday, he said.

“I sat down and practiced on it day after day,” he said. “My mom (Elizabeth Atkins-McGlothin) is one of my biggest supporters and my dad was in a band for 40 years. Watching him when I was a little kid shaped who I am as a musician.”

His performance of CCR’s “Born on the Bayou” pushed him through three rounds of virtual auditions before he performed on the American Idol stage. He can’t say yet what other songs he will be performing for America during Hollywood Week, but McGlothin did say how his friends can watch him perform at home.

He and Gregg will be playing from 11 a.m. to 1:30 p.m. at the Natchez Bicycle Classic Saturday, April 30, and from 6 to 9 p.m. Friday, May 6, at the Delta Music Museum Arcade Theater in Ferriday, Louisiana.

To learn more about Bryce McGlothin’s music and upcoming shows, visit www.brycemcglothin.com. He can also be followed on social media at “Bryce McGlothin Music.”