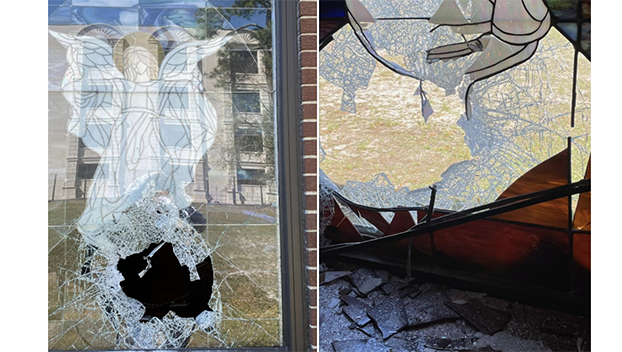 Police are trying to figure out who broke into a Gulf Coast church and made away with the church’s altar Bible and wooden cross.

Gulfport police are investigating after someone smashed into the stained glass window of the Handsboro United Methodist Church using a cross stolen from another church.

The items that were stolen were of great sentimental value to the church, Pastor John McCay told WLOX in Biloxi.

Police are trying to figure out if the burglary is related to other recent church and cemetery vandalism in the area.

Fernwood Baptist Church on Pass Road was broken into twice recently. Saint James Cemetery at Anniston and Pass was also vandalized earlier this week, with several angels snapped off headstones.

The items vandalized at the cemetery also were of great sentimental value, including a statue of Christ broken off from a cross that had held up through hurricanes.

A depiction of Christ was broken off a cross from the St. James Cemetery and left on Handsboro Baptist’s front doorstep Friday, WLOX reported.