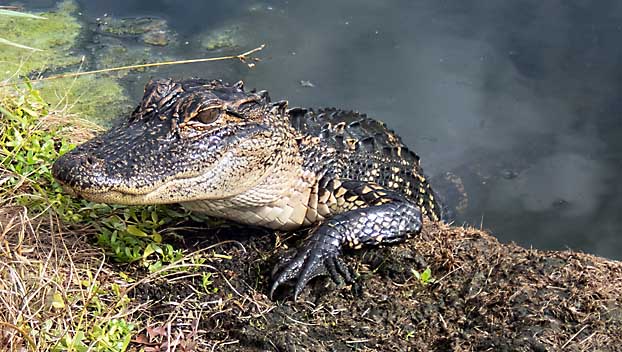 The number of alligators in Pelahatchie Bay is becoming a problem so the Mississippi Department of Wildlife, Fisheries and Parks has proposed a hunting season to help reduce the population.

“We get tons of alligator complaints,” Flynt said. “It’s chronic during the months of June and July.”

Flynt said last year he found a high number of nests during a survey of the bay.

While alligator hunting has been allowed on a limited basis on the reservoir since 2005, it hasn’t been allowed in Pelahatchie Bay due to concerns about the residential areas around it.

Flynt said the structure of the proposed hunts addresses that. Hunting in or near residential areas is prohibited and alligators cannot be killed within 100 yards of any kind of structure such as piers, boat ramps or boathouses. He also noted that alligators are secured and killed at point-blank range with shotguns using what is typically referred to as bird shot, so the method is safe.

“We want to stress the point that these people will not be shooting alligators out across the water,” Flynt said.

The proposed hunts are scheduled May 5-7 and May 12-14, 2023. A random drawing will be held for 12 possession permits for each weekend for a total of 24 permits. Hunters apply in pairs and those drawn must hunt from the same vessel which limits hunts to six parties per weekend.

Each permit-holder may harvest two alligators over 6 feet (1.8 meters) in length.

Flynt said the timing of the hunts offers hunters a better chance at success because vegetation won’t be as thick as it is during the traditional late summer hunting season, so hunters can access more water. It is also during the alligator breeding season, which will make females more accessible.

The proposal is currently in a 30-day comment period and a final vote is expected to be made by the Commission on Wildlife, Fisheries and Parks in its April meeting.