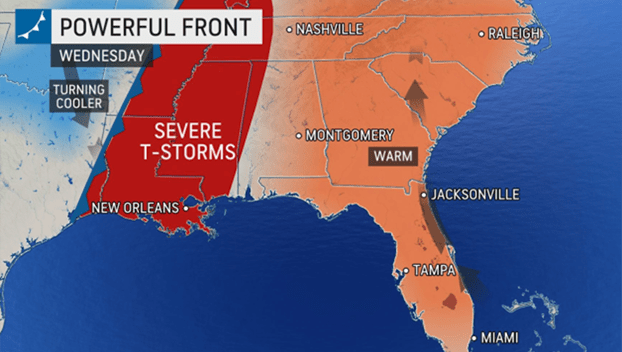 A volatile weather system tracking west to east across the United States is threatening to bring an outbreak of severe weather to a wide section of the Gulf Coast region hit hard by a tornado outbreak last week.

Tens of millions of Americans live in areas that will be under a threat of significant severe weather on Wednesday, and the threat will continue well into the evening hours.

The risk of damaging thunderstorms and heavy downpours will be prevalent Wednesday and Wednesday night into areas from eastern Texas to the Florida Panhandle and as far north as southern Illinois. Severe thunderstorms are likely to impact some of the same areas that were slammed with severe weather just a week earlier, and AccuWeather meteorologists are warning residents in those areas to be on high alert once again for more dangerous storms.

“While locations from western Kentucky to far eastern Texas may have storms containing damaging winds, flooding downpours, hail and an isolated tornado, the greatest risk for tornadoes is expected to be across an area from central Louisiana through Mississippi into western Alabama,” said AccuWeather Meteorologist Isaac Longley. Once again, the AccuWeather Local StormMax™ will be 90-mph wind gusts in the strongest thunderstorms.

Potentially severe thunderstorms are expected to began ramping up by Wednesday morning for cities like Little Rock, Arkansas, Memphis, Tennessee, and Cape Girardeau, Missouri. For other locations, including New Orleans, the stormy weather is likely to begin during the afternoon hours. Just last week, part of New Orleans and a suburb took a direct hit from an EF3 tornado.

The National Weather Service (NWS) issued a rare high wind warning for southern Louisiana for Wednesday. The meteorologist-in-charge for the NWS New Orleans office said on Twitter, “this a rare event, but with the area still having so MANY blue tarped roofs on the southshore and in the Bayou Parishes due to Ida, and Arabi tornado path we thought this was appropriate.”

In addition to the high winds, flash flooding will again be a concern Wednesday and Wednesday night, especially as rivers remain at fairly high levels after the last outbreak of rain and storms.

Storms are forecast to speed into Nashville and Birmingham, Alabama, during the late hours of Wednesday.

“It is likely that the severe thunderstorms will move eastward at a swift pace Wednesday night and could be racing along at 50 mph or more,” AccuWeather Meteorologist Ryan Adamson said. “This fast motion may not allow people in the path of the storms much time to react and take shelter.”

The storm system moving eastward is so expansive that more than 50 million are at risk for some type of severe weather on Wednesday, according to the National Weather Service’s Storm Prediction Center (SPC). The SPC has issued a moderate risk for severe weather Wednesday, which is the second-highest risk category for severe thunderstorms issued by the center. More than 8.2 million people live in the area covered by a moderate risk.

New Orleans, which sustained a direct hit from an EF3 tornado last week, is in line for more severe weather this week, AccuWeather forecasters say.

AccuWeather
In addition, the threat of nighttime tornadoes will once again be a hazard that residents in these areas are advised to be on alert for.

“A major concern about this outbreak is that severe thunderstorms will likely continue into the overnight hours, which can be especially dangerous,” said Longley, who advised those in the region to keep a pair of shoes, a flashlight and charged electronic devices nearby when they go to sleep each night.

Forecasters say anyone planning to be out in the elements might want to reconsider travel plans as flooding on roadways can be particularly difficult to see at night and conditions can often change rapidly.

“It remains critical that anyone in the potential path of severe weather has a way to receive time-sensitive and potentially life-saving warnings,” urged AccuWeather Meteorologist Mary Gilbert.

By Thursday, much of the stormy weather will continue to shift eastward, bringing with it the potential for severe weather across much of the East Coast. There can be strong wind gusts, small hail and even flash flooding from torrential downpours.

“By the end of the week, the storm is forecast to finally push off the East coast and move out over the Atlantic Ocean, effectively ending the opportunity for additional potent weather,” Gilbert explained.