IT’S A (JET) BLAST: Classic jet aircraft will be flying the Mississippi River skies this weekend 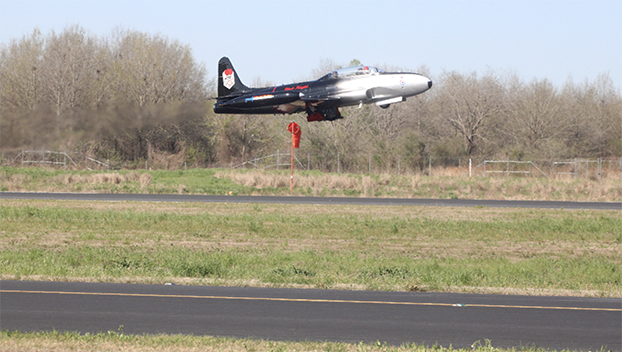 The morning calm at the Vicksburg-Tallulah Regional Airport was broken early Friday by the whine of turbines and the essence of jet fuel as pilots wound their engines up and took to the skies over Madison Parish, La., and Vicksburg.

The airport played host to a jet formation clinic Thursday through Sunday, bringing 12 classic aircraft and their pilots to earn their certification to fly with other aircraft in formation.

“This is what we call a jet blast,” said Sonny Schilleci, president of the Classic Jet Aircraft Association. “It’s also coinciding with our 2022 convention, which will be held here Saturday night.”

According to its mission statement, the association’s mission “is to protect the right to fly classic jets with the least amount of regulation and restrictions commensurate with the safe operation of our aircraft.”

To do that, the CJAA works periodically with government agencies at every level, with other flying organizations “and the general public, to ensure that our voice is heard and that we are part of any process that might affect our ability to fly our aircraft.”

The association also demonstrates its commitment to the safe and professional operation of the members’ aircraft through the continuous development of safety, training and maintenance programs and publications and by providing the results of these programs to the members.

A jet blast is one of those programs.

“It’s where the classic jets come together and get certification training,” Schilleci said.

“This how we get pilots wing-carded and lead-carded to fly formation in FAA (Federal Aviation Administration)-waivered airspace (like air shows),” he added.

Getting wing-carded, he said, means pilots can fly in FAA-waivered airspace on the wing of another plane in formation. Lead-carded “means that you can lead the flight. In order to fly at an airshow in formation in waivered airspace, you have to have these cards.”

He said the Formation and Safety Team, or FAST, a civilian worldwide, educational organization dedicated to teaching safe formation flying in restored vintage military aircraft and civilian aircraft, manages the certification process and sets the standards people have to adhere to so they can possess the cards.

The difference, Schilleci said, is the aircraft.

“In jets, you’re flying at much higher airspeeds; it’s a much higher performance aircraft and they handle significantly different than a prop-driven aircraft,” he said. “Jets go through the air a lot slicker than a prop does, so it does take a different skill set to fly jets in formation.”

He said the Classic Jet Aircraft Association clinics are held in various locations throughout the year.

“We like to hold at least six jet blasts throughout the country. That gives people in various geographic locations the opportunity to attend the clinic and sharpen up their formation skills,” he said. “They have to recertify every year.”

Schilleci said each formation clinic starts with a safety briefing with information on the area, “Then we put the flights up and start training with planes going off in formation.

During flights, a check pilot who flies in the jet’s rear seat may accompany a pilot.

“When it’s time to do a check ride to give somebody their FAST card, he’s the guy who signs off on it,” Schilleci said. “We have three check pilots. They’re always in somebody’s back seat.

“I’m testing them for formation skills, so if they’re going for a wing certification they know all the signals, they can fly the airplane in formation, they can handle the plan safely in the formation — very specific things you have to know how to do if you’re in formation if things go wrong to make sure they don’t get worse,” said Scott Glaser, one of the check pilots.

If the pilot passes, they get their FAST card allowing them to fly in formations. Besides serving as a check pilot, Glaser is also an instructor and can, when he’s not doing check rides, instruct a pilot on proper formation flying.

The majority of the jets flying at the clinic in Mound included the L-39 Albatross and L-29 Delphin and L-139, all made by Aero Vodochody for the Czechoslovakian Air Force; the Jet Provost trainer flown by the Royal Air Force and the Lockheed T-33 Shooting Star trainer used by the U.S. Air Force.

“It’s actually an L-39 ZO; that is its designation. It spent its time in the East German Air Force,” he said.

And while some of the classic jets in the association are trainers, he said, “Some planes are actually fighters. We have some owners of classic jets that were former military fighters.”

Schilleci said his plane was used by the East German Air Force as a light attack aircraft.

“They did border patrol back when you had East and West Germany,” he said.

Schilleci said the FAA allows pilots to own military aircraft but the planes have to be “de-milled;” all the armaments and weapons systems have to be removed.

And while his plane still has the original armament panels, all the wiring and timers or anything related to dropping bombs have been removed.

Schilleci said planes like his, the L-29, L-139 and other aircraft can be acquired in the U.S. or overseas.

“When the Soviet Union collapsed, cash was king so you could go over there with a suitcase of money and buy whatever you wanted,” he said. “It’s still true.”

He said some association members own and fly Russian MiGs like the MiG 15 and Mig-17.

“We had jet blast a few weeks ago. A lot of the MiGs had red Russian stars; we put Ukrainian aircraft stickers over the Russian stars in support of Ukraine.”