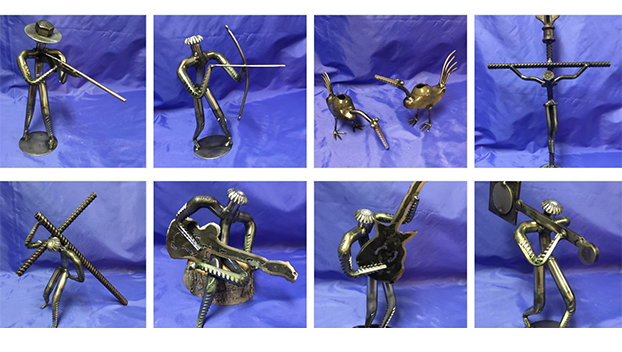 Located just off U.S. 61 in the small South Delta town of Rolling Fork is an art gallery where customers find works created from discarded metal pieces that once served purposes likely unfamiliar to them.

The pieces in Lee’s Cotton Picker Art are largely inspired by the sights and sounds of the Delta and for their creator, Lee Washington of Rolling Fork, they’re the fulfillment of a dream he had in 1994.

“I was in Atlanta, Georgia at my brother’s,” Washington said. “I had a dream I was going to be wealthy in later years. I thought it meant I was going to get some money. I kept thinking it was financially, but of course, it wasn’t.”

Years passed and large amounts of money never came, but along the way Washington realized his dream did come true with a different form of wealth.

“It was the knowledge to make the sculptures,” Washington said. “The ability to create something out of nothing and people willing to buy it and look forward to seeing it — it makes me feel good.”

Following retirement from a career as a mechanic in the U.S. Army, Washington began a second career teaching agricultural mechanics at the South Delta Career and Technical Center in1995.

In 2001 he began looking at worn-out spindles from cotton pickers that were in his shop at the school in a different way.

“The spindles are used to extract the cotton from the boll,” Washington said. “They rotate and the cotton gets caught up on the spindle. Once the tips wear they don’t extract the cotton. We had made hammers out of some and had some left over. I kind of positioned them on the table and formed a stick man. After I saw that I started putting them in a vice and cut the heads off and heating them with a torch and started bending them.”

“The first ones I made, I really didn’t do a good job because I didn’t know about art, per se,” Washington said. “They really didn’t look good at all, but people bought them and that’s what got me selling.”

His work looks different now. In his shop behind the gallery the spindles are brushed to a bright finish before they are cut and welded. The bends he makes bring his work to life with motion.

“I go out of may way to make sure it has movement,” Washington said. “It’s not just a straight piece of art. It has some kind of movement to it.”

As he works, Washington mentions he typically listens to music while working. Even without him saying it, music is obviously a part of his life. Along with his art, a reel-to-reel and 8-track tape decks are on display as well as other musical memorabilia.

“I’ve always loved music,” Washington said. “It’s really hard to work without it. It just seems to get the vibes going and the process.”

In addition to his signature cotton picker spindle art, Washington uses a variety of metal and objects to create his work. An example includes a scorpion with a spark plug serving as the body.

Not surprisingly, though, his love of music inspires his most popular pieces — blues musicians.

“In Hollandale we had an area called Blue Front,” Washington said. “At Blue Front there were about five clubs door to door to door. I went there every weekend in my late teens. Blue Front was the place to be. It was just the atmosphere and seeing people intoxicated and dancing and enjoying the music.”

Washington is now 68, an age when most have slowed down and left work by the wayside, but Washington has no plans to stop creating his art. The creative outlet and joy it brings to people will keep him working while listening to the music he loves for years to come.