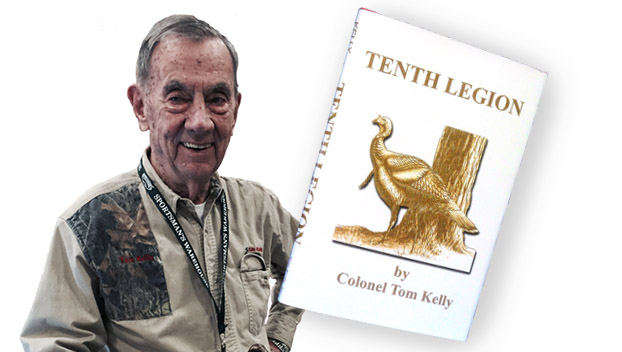 He rose to fame in the world of turkey hunting in the 1970s and at 94 years old he returned to his hunting roots in Mississippi to harvest another bird.

“When he saw that bird the hunter instinct kicked in,” Med Palmer of Hazlehurst said. “He’s been hunting them 83 years He knew what to do. I guess you keep that instinct no matter how old you are.”

The hunter is retired U.S. Army Col. Tom Kelly who served in World War II and the Korean War. For those who aren’t turkey hunters, his name probably isn’t familiar. For many who are, he’s considered to be a legend due to a book he wrote and published in 1973 — “Tenth Legion.”

“Turkey hunting was just getting popular when it came out,” Palmer said. “It was probably the first book written about turkey hunting. The timing on that book was perfect. People were just learning about it. The way he wrote it just drew the hunting crowd to that book. Everybody could relate to those stories he told at some point in the course of their hunting career.”
Born in 1927, Kelly grew up in South Alabama, but his hunting career began in Mississippi.

“I had an uncle who turkey hunted,” said Kelly, of Bethesda, Maryland. “He hunted along the Pascagoula River. He was a big hunter and fisherman. Anything to do with hunting and fishing, I was invited to be a part of.”

Kelly said he started hunting when he was 8 or 9 years old and harvested his first turkey at 11. The passion he developed for turkeys defined him later in life.

Kelly wrote his book of humorous tales of turkey hunting at the urging of his wife. He titled it “Tenth Legion” after ancient Rome’s elite military force which he equated to turkey hunters. His self-published book and initial 1,100 copies found unexpected success.

“I had no idea I’d sell that many books,” Kelly said. “I thought I’d sell as many as I could and then have a lifetime supply of Christmas presents.”

On March 18, Kelly was in Mississippi hunting with Palmer, Stevie McLemore of Hazlehurst, Kelly’s friend Joe Wood of Biloxi and others. Like Palmer has done for hundreds of disabled hunters, first-time hunters and military veterans, he called in a pair of gobblers for Kelly.

Despite Kelly’s advanced years, he was able to get his sight on one of the birds and fire.

“The turkey folded,” Palmer said. “It was unbelievable. When he saw them, you could tell all those years of turkey hunting kicked in. Of course, we were all excited.”

Much like Kelly’s turkey hunting career, the stories he tells are long-lived. He’s written a number of books since 1973, but “Tenth Legion” has been a continued success story.

“He is nationally recognized as the Poet Laureate of turkey hunting stories and literature,” Wood said. “‘Tenth Legion,’ it is the one book most turkey hunters read. It’s been republished probably 10 times over the last 20 years. It’s humorous. If turkey hunters could have only one book, that’s the one they want to have.”

Although excited about his recent hunt in Mississippi, Kelly didn’t seem surprised by his success. After all, he has 83 seasons of experience. When asked about the continued interest in a book he wrote almost 50 years ago, his response was quite different.
“It just keeps coming back and coming back and coming back,” Kelly said. “I am absolutely dumbfounded that people are still buying it.”

When it comes to small towns, this Mississippi town…