Countries accepting the most Ukrainian refugees 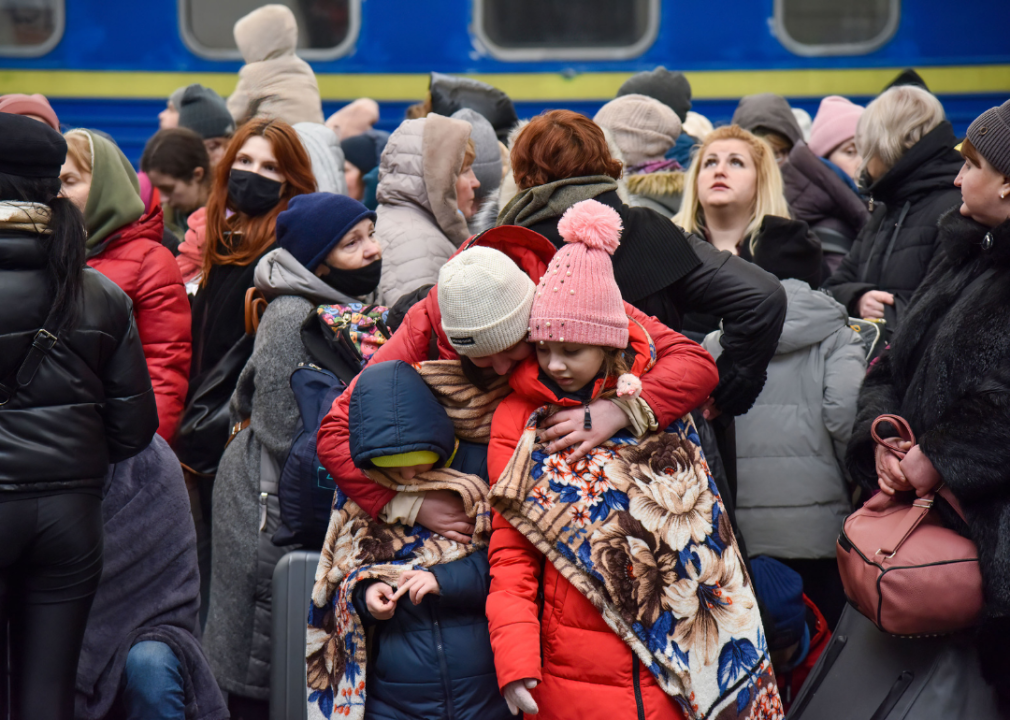 Countries accepting the most Ukrainian refugees

Since Russia’s Feb. 24 invasion of Ukraine, millions of Ukrainians have fled their country and escaped to surrounding Eastern and Central European nations in droves. As of March 31, over 4 million, or about 10% of all Ukrainians, had left.

The massive scale and rapidity of the exodus out of Ukraine is unprecedented in recent European history and was last seen during World War II. The escalating refugee crisis highlights the welcoming attitudes of other European countries toward Ukrainian refugees, particularly among nations that have historically taken an antirefugee stance.

Understanding why Vladamir Putin invaded Ukraine is, in some ways, tied to where refugees are going. In 2004, Ukraine’s Orange Revolution set the country on a new path, politically and culturally aligning with Western Europe rather than Russia. After Kremlin-backed Ukrainian leader Viktor Yanukovych was overthrown in 2014, Putin seized Ukraine’s Crimea Peninsula, giving Russia control over the economically and militarily important Sevastopol naval base.

Ever since, Putin has sought other ways to regain control over Ukraine, stoking pro-Russian separatist movements in eastern Ukraine and circulating rumors that Ukrainian President Volodymyr Zelenskiy’s government is full of neo-Nazis. Leading up to the invasion, Ukraine tied itself closer to European powers like the European Union and NATO. Just before invading, Putin claimed his aims were to “demilitarize” Ukraine, while at the same time officially recognizing the pro-Russian separatist groups.

Now, Ukrainian refugees are fleeing to neighboring countries, many of which were also formerly part of the Soviet Union, and who have since joined NATO and the EU. Some analysts believe this shared history, as well as shared defiance of Putin, has led many Europeans to embrace Ukrainian refugees. However, there is a stark difference in Europe’s reception of refugees from Ukraine in contrast to refugees from the Middle East, Africa, and Asia.

According to a survey of 18,000 people across 15 European countries, factors like religion, language skills, and country of origin of potential refugees impact how many Europeans evaluate who is worthy of being granted safety and asylum. Bulgarian Prime Minister Kiril Petkov put it explicitly when he said of Ukrainian refugees, “These people are Europeans. These people are intelligent, they are educated people. … This is not the refugee wave we have been used to…”

Other countries have also pledged to aid Ukraine in its efforts to fight back Russian forces and accept refugees. President Joe Biden has announced $1 billion in military aid and promised the U.S. would accept up to 100,000 refugees fleeing the crisis. Germany broke its long-standing policy of not sending weapons to conflict zones and has promised to aide Ukraine. The EU granted Ukrainian refugees a temporary residence permit that removes the need for them to request asylum in any EU member country, allowing them to move freely throughout Europe.

To determine which countries have taken in the most people fleeing Ukraine since fighting broke out Feb. 24, Stacker compiled refugee data (last updated April 3) from the United Nations High Commissioner for Refugees. The UNHCR compiles these statistics from several government sources from each country, primarily looking at border crossing data, but since the war between Russia and Ukraine is ongoing, these numbers are only estimates and does not consider refugees who have passed through one country to get to another. The only exception are refugees who have crossed the border between Moldova and Romania.

You may also like: Where US refugees come from—and why 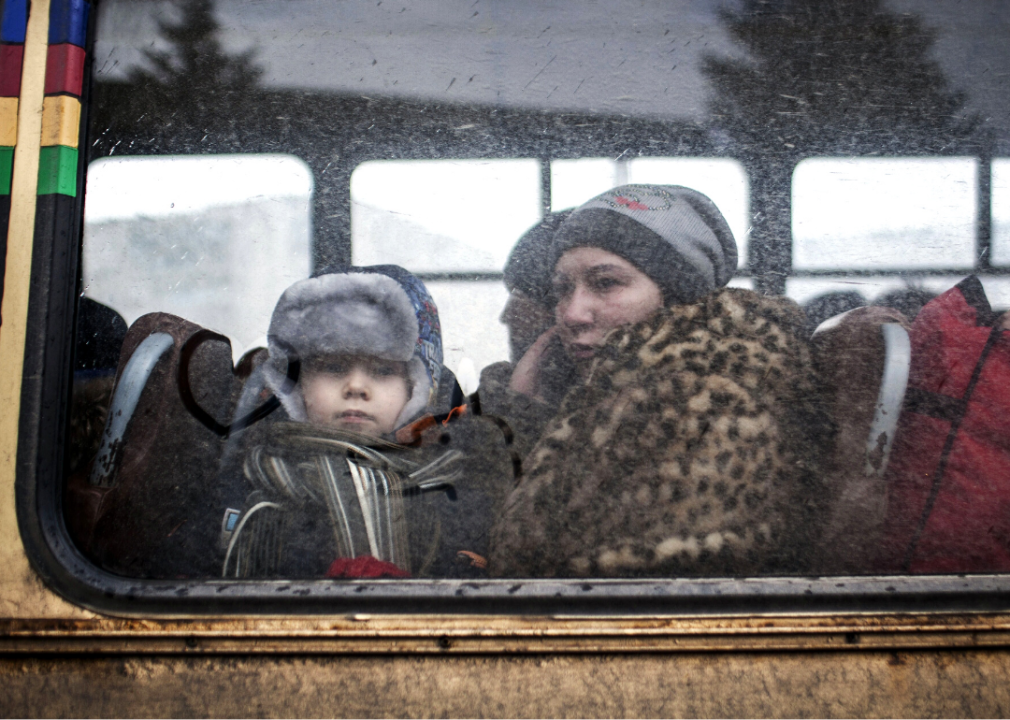 Although some Ukrainians have sought refuge in Belarus, it is the only country in the region to ally itself with Putin and the invasion. Since Belarus shares a large stretch of border with Ukraine, it has been valuable to Russia in terms of military strategy. Tens of thousands of Russian troops gathered in Belarus near the Ukrainian border in the months leading up to the invasion and were able to invade the Ukrainian capital of Kyiv easily from Belarus.

Refugees have also reported abuse from Belarusian asylum camps. Asylum seekers from the Middle East, who were once promised passage to the EU, are now being forced from the camps. Middle Eastern refugees can either go to Poland, where they were previously beaten back by Polish border police, or go into the active warzone of Ukraine. 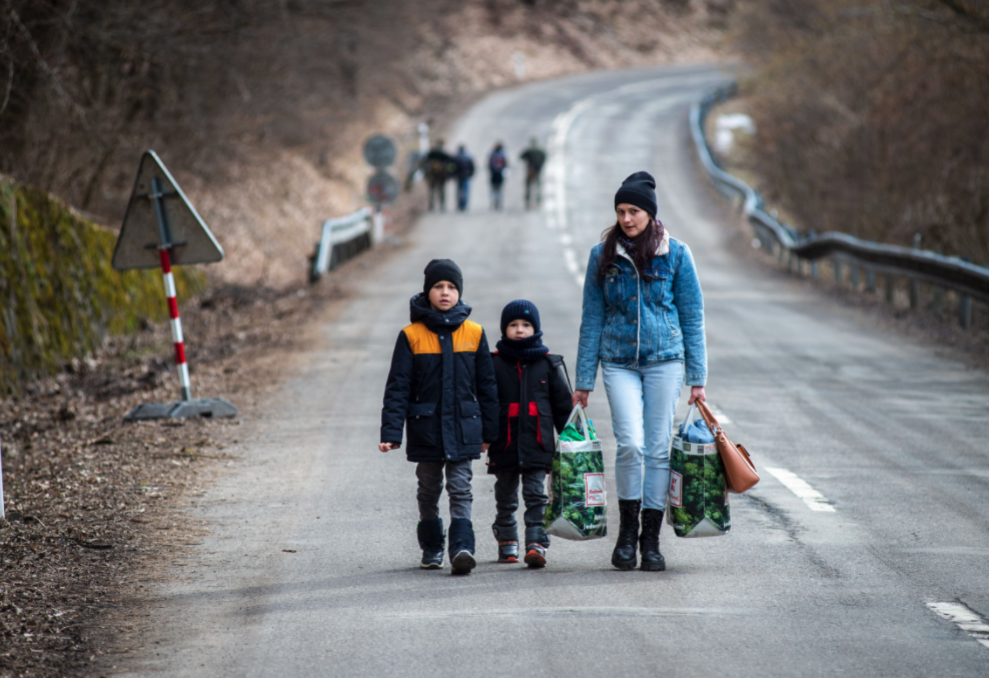 Sharing a short border with western Ukraine, Slovakia has seen a steady influx of mostly women and children refugees. According to Igor Matovic, Slovakia’s finance minister, Slovak households that provide refugees with shelter will receive financial assistance from the government. The country is also providing military assistance to Ukraine in the form of artillery ammunition and fuel.

Arriving refugees have been met by NGOs providing food and water, hygiene supplies, medical care, and legal advice. Veterinarians are even present to attend to people’s pets. The Slovak chapter of the Order of Malta, a Catholic human rights order, has been coordinating accommodations and rides for refugees who need to move to a different location. 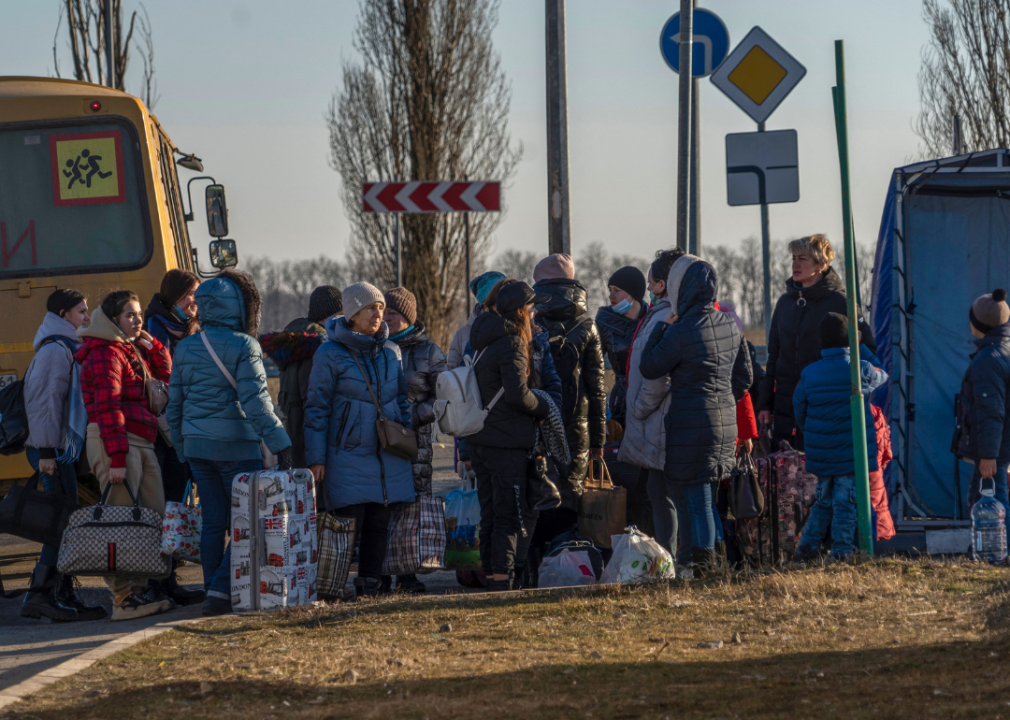 Russia has offered Ukrainian refugees a safe haven from the fighting it initiated in Ukraine and has also offered refuge in Putin-allied Belarus. Ukraine’s deputy prime minister as well as other EU member nations’ leadership denounced this as a “trap,” meeting the announcement with disbelief.

Meanwhile, tens of thousands of Russian citizens have fled Russia in the wake of the invasion of Ukraine. Many fear a Soviet Union-era crackdown on dissidents or not being able to leave in the future. Thousands of antiwar protestors in Russia have been arrested, and a group of Russian activists penned an open letter condemning the war and establishing an antiwar council. Other activists, journalists, and outspoken critics of the war have been arrested or intimidated at their homes.

*Please note that the Russian refugee intake numbers are as of March 29, the last time data was updated for this country. 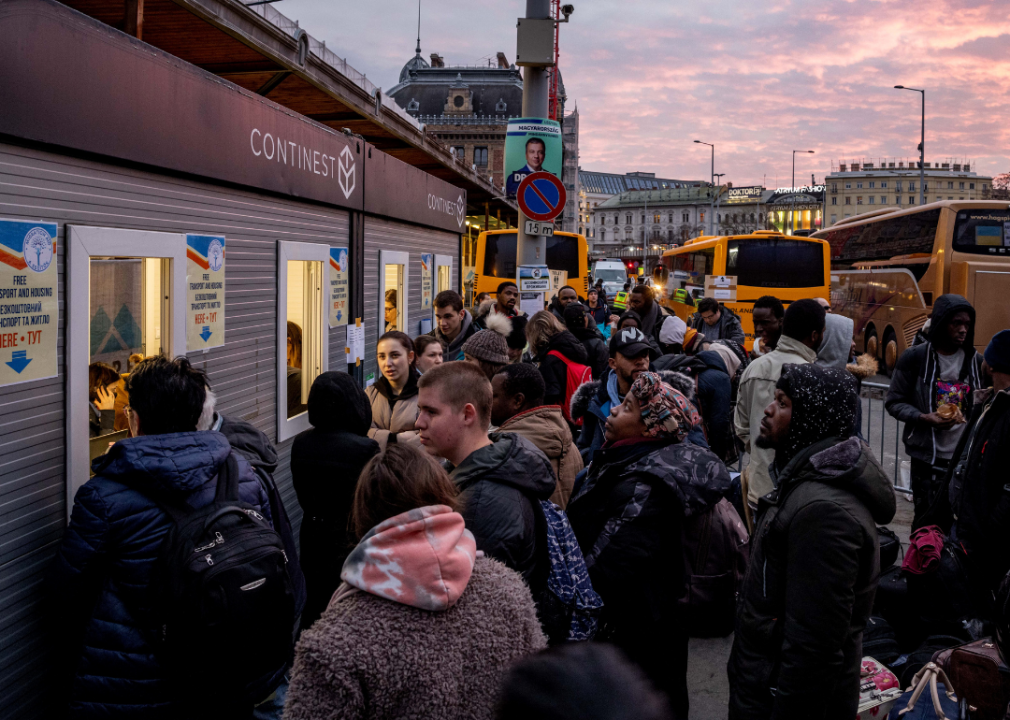 Although the Ukraine-Hungary border is small, there has been a large stream of Ukrainian refugees into the country, made up of mostly women, children, and international university students. Hungarians have shown solidarity with the refugees, with many volunteers welcoming them at the border and supplying aid. Even famously antirefugee Hungarian Prime Minister Viktor Orban—who campaigned on far-right, nationalistic, and xenophobic rhetoric—has expressed his support for incoming Ukrainian refugees.

This support contrasts heavily with Orban’s 2015 Syrian refugee policy, which earned the country the nickname “Fortress Hungary” due to its unwelcoming nature. Part of the policy, which involved deporting refugees to nearby Serbia, was deemed by the European Court of Justice to violate EU law. Border police also deployed attack dogs and water cannons to keep out refugees from the Middle East, raising questions about the notably disparate treatment Ukrainian refugees have received. 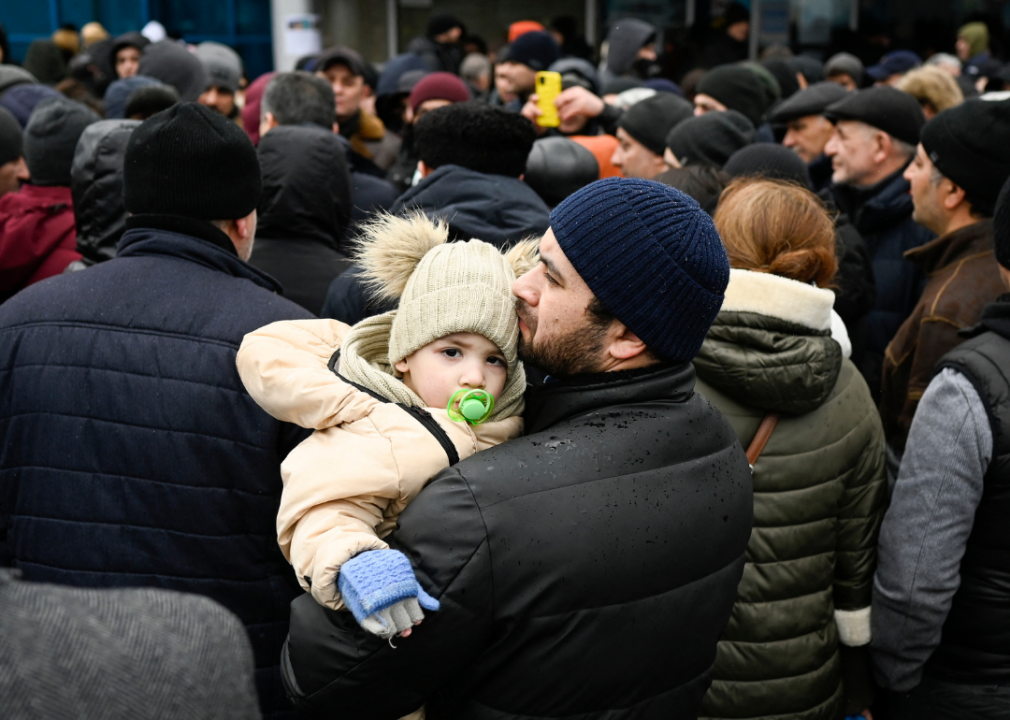 The Republic of Moldova’s location between Ukraine and Romania has led many Ukrainians to seek refuge in or pass through the roughly Maryland-sized country. The sudden influx of hundreds of thousands of refugees has raised concerns about overwhelming Moldova, one of the poorest European countries, with limited resources to sustain aid.

Other nearby nations with more resources stepped up to help, with Romania arranging bus services to transport refugees out of Moldova and into Romania, supported by UN Refugee Agency and the International Organization for Migration. Germany has also committed to taking in 2,500 Ukrainian refugees from Moldova in order to alleviate some of the strain. 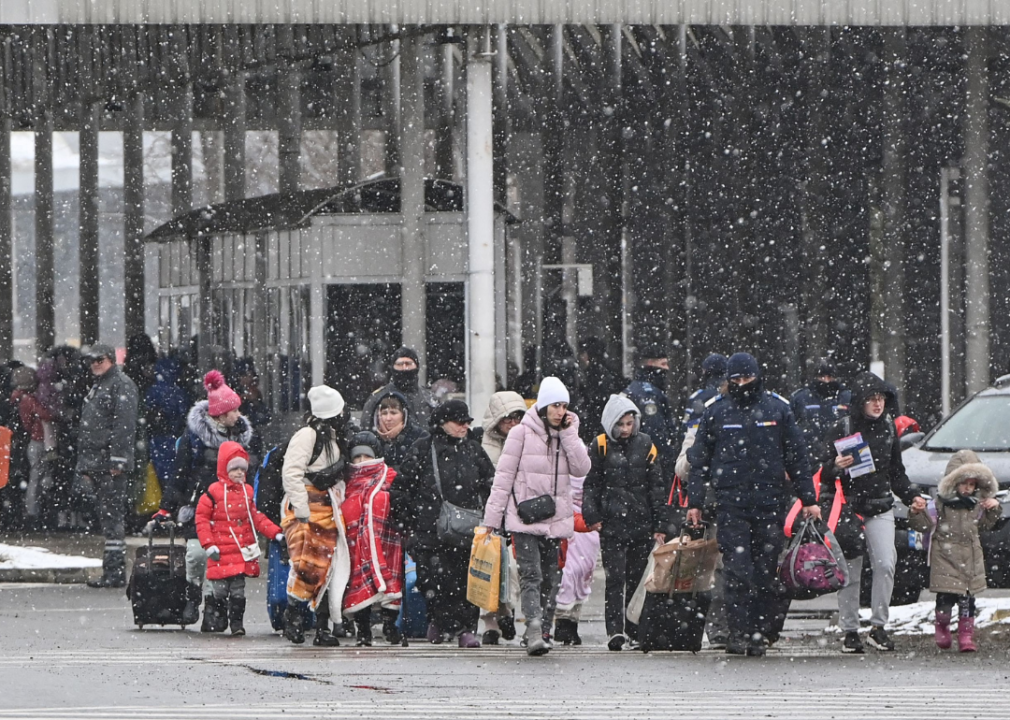 While many refugees who entered Romania since the Russian invasion have departed for other countries, upwards of 84,000 remain, mostly concentrated in Bucharest, the nation’s capital. The country made shelters available, even converting part of the massive exposition center Romexpo to a refugee overflow shelter.

Dr. Raed Arafat, Romanian internal affairs minister, also said the country is attempting to make more permanent housing options available for refugees. Many Ukrainians have expressed their desires to return to their country when it’s safe to do so in order to rebuild, but the Romanian government began taking initiatives for long-term solutions for those who do not plan to go back. 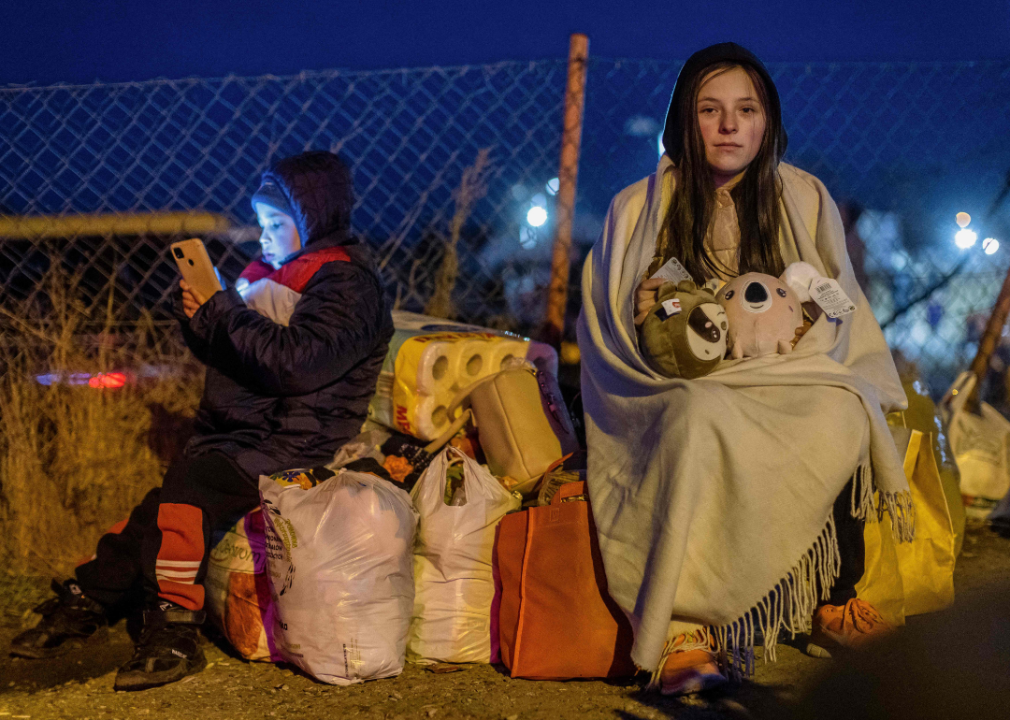 The vast majority of Ukrainian refugees have gone to Poland—in numbers equalling the population of Poland’s largest city, Warsaw. Movement into Poland is unsurprising, considering the country’s pre-war Ukrainian population was already the largest in the region at 1.5 million.

Poland’s government has already passed legislation to aid the massive influx of refugees, including allowing refugees to stay legally in Poland for 18 months without a visa, offering financial assistance to Polish households who help shelter refugees, and one-off subsistence payments to Ukrainian refugees. Ukrainian children received permission to integrate into Polish schools, and adult refugees can work without a Polish working permit. Refugees will have access to the Polish health care system, and since many refugees are lone mothers with children, Ukrainian families have access to financial assistance.

You may also like: Most lopsided state legislatures in America 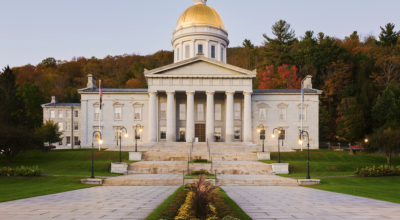 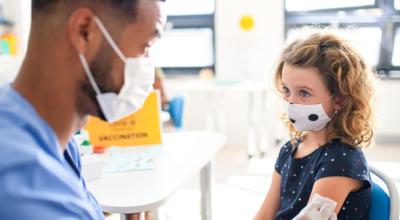 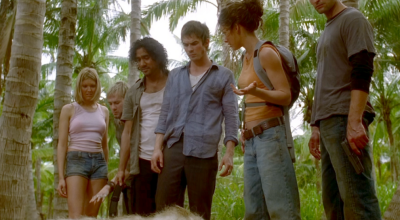 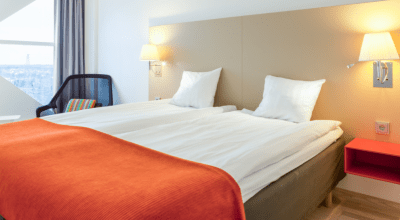