For third time in three weeks, tornado and severe weather threat in forecast for many in Mississippi 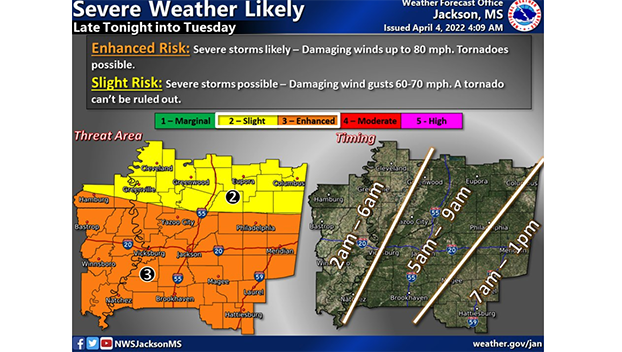 Multiple rounds of severe weather that will carry the risk of tornadoes are in the forecast for the storm-weary southern United States, AccuWeather meteorologists warn.

“While April often denotes a strong uptick in severe weather, Gulf of Mexico waters are running well above average for this point of the season, and that could mean that storm systems will have the potential to trigger even more severe weather and tornadoes than one might expect,” AccuWeather Lead Long-Range Meteorologist Paul Pastelok said.

The risk of severe weather through Tuesday evening does not represent an extreme risk for tornadoes, but even a single tornado that strikes a populated area has the potential to lead to loss of life and significant destruction. About two weeks ago, an EF3 tornado pummeled parts of the New Orleans area and left at least one dead and several injured.

The setup through Tuesday has the potential to produce a half dozen to a dozen tornadoes or so, AccuWeather meteorologists say.

Here is a a look at the severe storm risk for late tonight into early Tuesday afternoon. Strong winds are the greatest risk with tornadoes possible. Heavy rain with localized flooding is also possible. Have a plan for your family when severe weather threatens. Stay weather aware! pic.twitter.com/gZD89pDtl2

Two key ingredients necessary for severe thunderstorm development will be present through Tuesday. High temperatures will be in the 70s and 80s F, and there will be an abundance of moisture flowing into the South from the Gulf of Mexico, according to AccuWeather Senior On-Air Meteorologist Michelle Rotella. The storm system will be strong enough to capitalize on the surging warmth and humidity, which will allow severe weather to ignite.

Storms that erupt Monday evening will carry an elevated risk of large hail and high winds from north-central Texas to southern Oklahoma. During Monday night, this threat will shift eastward into southern Arkansas, northern and central Louisiana and central and southern Mississippi.

A large complex of thunderstorms may form late Monday night and Tuesday morning, and powerful wind gusts with an AccuWeather Local StormMax™ of 80 mph will be possible. At this force, sporadic power outages and property damage can occur along with an elevated risk of trees being knocked over due to saturated ground.

As the storm complex moves along during Tuesday and into Tuesday evening, the leading edge will produce the strongest winds, flash flooding and the greatest risk of a few spin-up tornadoes.

Downpours may linger for a time in the wake of the line of storms on Tuesday, which can continue the risk of urban and small stream flooding. Areas from southeastern Louisiana and Mississippi to much of Alabama, Georgia and South Carolina, as well as northern Florida, will be in the path of the severe thunderstorm complex.

The setup from Monday night through Tuesday evening could cause some torrential downpours to linger for several hours, which is a big reason for an enhanced risk of flooding in this situation, AccuWeather Chief On-Air Meteorologist Bernie Rayno said.

The risk of potentially damaging and dangerous storms will be renewed on Wednesday afternoon and evening, forecasters say. A large storm over the North Central states will begin to pull warm and humid air northward from the Gulf of Mexico once again and limit the break from severe weather to less than 24 hours in parts of the Southeast.

Severe thunderstorms will quickly expand from southeastern Louisiana to the Florida Panhandle, northward to middle and eastern Tennessee and the western and central portions of the Carolinas during Wednesday afternoon and evening. Heavy to locally severe storms may also extend northward over parts of the Ohio Valley and perhaps as far to the north as the shores of Lake Erie.

All facets of severe weather will be possible including large hail, flooding downpours and powerful wind gusts as high as 80 mph.

The threat on Wednesday includes many major cities along the I-85 corridor from Montgomery, Alabama, to Atlanta and Charlotte, North Carolina. For some cities, such as New Orleans, Atlanta, Birmingham, Alabama, and Pensacola, Florida, Wednesday could be the second consecutive day with severe thunderstorms or flash flooding

The risk of severe weather may not come to an end on Thursday. As a cold front spirals eastward from the large storm over the North Central states, heavy, gusty thunderstorms, perhaps a few with damaging winds, may erupt from the eastern parts of the Carolinas to as far to the north as Maryland, Delaware and southern New Jersey.

Several days of quieter weather conditions are likely for the Southern states beginning on Friday as unseasonably cool air takes hold and lasts through the weekend. The next round of severe weather may then begin to unfold early next week over the southern Plains.