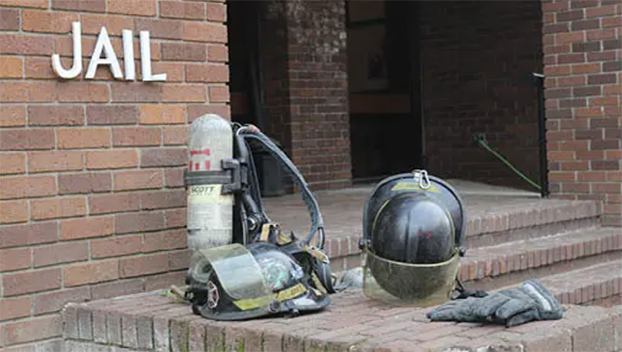 A group of inmates at the Adams County Jail on Wednesday late afternoon tried to set some clothing and blankets on fire and caused the third floor to fill up with smoke.

“How they (inmates) got an igniter, I don’t know. This happened in an open bay area on the third floor. An investigation will be done as to how this was allowed to transpire, whether it was inmates or staff negligence and disciplinary action will have to be taken,” said Adams County Sheriff Travis Patten.

Patten said the clothing and blankets were set on fire during shift change at the jail.

“The staff did the best they could to go up and evacuate all of the third floor and move all of the inmates to the sally port,” which is an area where prisoners are taken in on the ground level of the jail.

Jail staff was able to extinguish the fire before firefighters arrived on scene. On Wednesday afternoon, firefighters were working to ventilate the jail and remove all of the smoke in the building.

“Because of the poor design of the jail, they had to open up the roof to do that,” Patten said. “This is an example of what we have been discussing for six years now. Something has got to be done. There are too many blind spots in this jail and it has outlived its usefulness. Thank God the staff got up there and put the first out and got the inmates out.”

Patten said it is almost impossible to stop contraband from coming into the jail.

“We don’t have metal detectors. It is a consistent issue that contraband is smuggled in. The jail doesn’t even have a place for a body scanner. There is no room for one.

“This situation is one that has been brewing for years. I understand the supervisors don’t want to raise taxes, but enough is enough,” the sheriff said. “We were able to avert bodily harm this time, but I can’t continue to promise that in the future, if we continue to operate in a facility that is non-functioning, that that will be the case.”

The Adams County Board of Supervisors went into executive session at its meeting on Monday to hear a report of the jail facility prepared by Kathryn Bryan of Detention Operations LLC.

“One of the statements she made was that out of the 170 jails she has inspected, design-wise, the Adams County Jail is by far the worst,” Patten said. “When the inspector came down to look at the jail, she told me, ‘You have optimized all of the space and usefulness of this facility. There is nothing else that can be done here.”