Between the law and suffering: Mississippi Senator, Congressman both support but offer differing views of flood control project 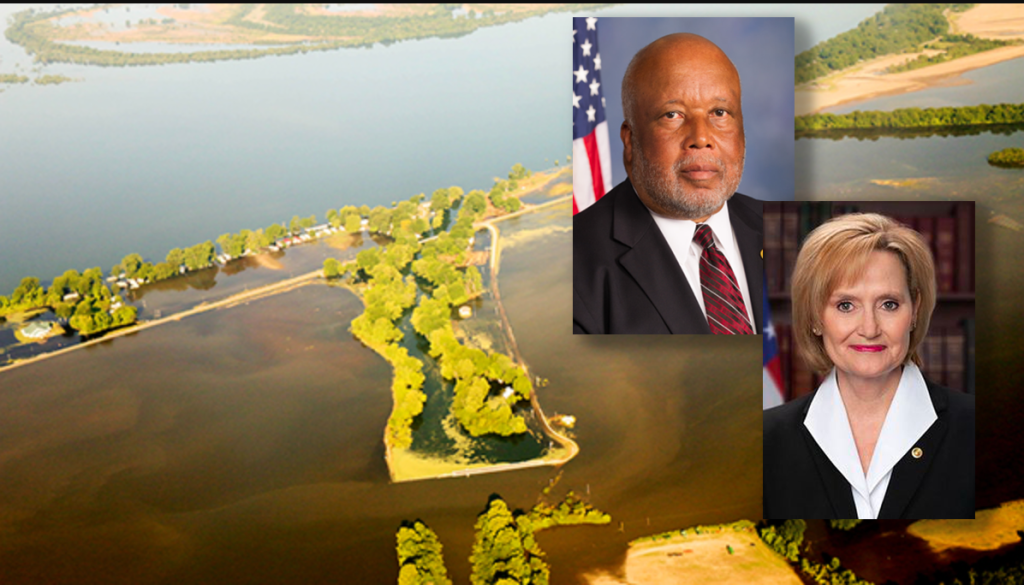 At a Senate Energy and Water Development Appropriations Subcommittee hearing to review the Fiscal Year 2023 Army Corps budget on Wednesday, Hyde-Smith focused on how to overcome the Environmental Protection Agency (EPA) decision in November to halt the Yazoo Backwater Area Pumps.

“I believe the Corps understands that the Yazoo Backwater Pump project is one of my very top priorities because I have seen the suffering that has happened in Mississippi,” Hyde-Smith said following the hearing. “It’s clear to me that the Corps understands that a pumping station is the only way to bring meaningful flood protection to this part of Mississippi. I hope ongoing talks help us make that a reality sooner rather than later.”

Democratic U.S. Rep. Bennie Thompson made his own statements about the pumps project during a presentation to the Vicksburg Rotary Club on March 24.

EPA canceled the pumps project in November 2021, citing it was in violation of Section 404(c) of the Clean Water Act. This cancelation was spurred in part by an August 2021 letter from Thompson, in which he cited “serious issues” with the EPA’s handling of the project under the Trump administration.

“I’m on record supporting the pumps, but I’m also on record saying they need to follow the law,” Thompson said. “I’m a law-abiding citizen. If the pumps don’t comply with the law, I’m not going to support them.”

The law he was referring to, Thompson clarified following his presentation, was Section 404(c) of the Clean Water Act.

“Section 404(c) of the Clean Water Act authorizes the U.S. Environmental Protection Agency to prohibit, restrict, or deny the specification of any defined area in waters of the United States (including wetlands) as a disposal site for the discharge of dredged or fill material whenever it determines, after notice and opportunity for public hearing, that such discharge into waters of the United States will have an unacceptable adverse effect on municipal water supplies, shellfish beds and fishery areas (including spawning and breeding areas), wildlife, or recreational areas. EPA’s 2008 Final Determination concluded that the discharge of dredged or fill material in connection with the construction of the proposed Yazoo Backwater Area Pumps Project and subsequent operation of the 14,000 CFS pumping station would result in unacceptable adverse effects on fishery areas and wildlife.

“The 2020 Pumps Plan for the Yazoo Backwater Area is prohibited under Section 404c of the Clean Water Act.  EPA’s Nov. 17, 2021 letter provides a detailed analysis regarding this determination. Beginning on page 11 of Attachment A to that letter, EPA details EPA’s reconsideration of portions of its November 2020 letter,” the EPA statement read.

During his presentation in Vicksburg, Thompson said he was in favor of alternatives to the Yazoo Backwater Pumps, as long as they “were legal.”

“The numbers speak for themselves. All you have to do is follow the law,” Thompson said. “I encourage the supporters of the project to follow the law. I’ve been on record, I’ve testified for it, I’ve done everything I can, but I’m not going to advocate for a project that doesn’t meet the requirements of the law.

“I’m not going to support a $500 million-dollar project,” he added. “I think broad-minded people would say, ‘what are the other options here?’ I’m for flood control. It doesn’t necessarily have to be the pumps. First of all, be legal.”

During the hearing, Hyde-Smith asked Lt. Gen. Scott A. Spellmon, Chief of Engineers and Commanding General of the U.S. Army Corps of Engineers, about the reality of being able to provide sufficient flood protection for the area’s residents, businesses and environment without a pumping station to remove trapped floodwaters.

“We are confident in our science. We are confident in our engineering that the pump station can be operated in a manner that protects these communities that you mentioned, but also protects the 38,000 acres of wetland that are in that area,” said Spellmon, who noted the Corps had considered almost three dozen non-pump alternatives that were not practicable or economically feasible.

In November 2021, the EPA halted the Corps’ new Proposed Plan for the pumps by disputing the peer-reviewed science and documentation. EPA also sought to justify its conclusion by arguing that the Corps’ 2020 Proposed Plan was the same plan vetoed by EPA in 2008, despite the 2020 plan being in an entirely different county with a host of different features.

During Wednesday’s hearing, Hyde-Smith highlighted the Biden Administration’s priority for “environmental justice,” highlighting the demographics of those disproportionately affected by annual floods in the Yazoo Backwater area.

The population is approximately 70-percent minority households, and 30 percent of the residents live at or below the poverty line.

“We have got to deal with that Backwater flooding. We’ve got to figure out the mix of structural and nonstructural. When I say structural, I think pumps are still in the mix for the discussion that we’re going to have in this interagency group,” Connor said. “I can assure you this is part of the environmental justice agenda to get to a project, to get to a solution because of the factors you mentioned with respect to minority residents in that area, as well as the poverty level in that area.

“We are getting the attention we need at a very high level,” he added, noting that an interagency working group, led by the White House Council on Environmental Quality, is trying to identify a path forward.