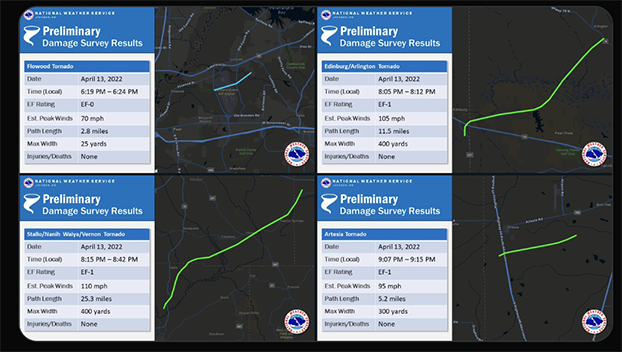 The National Weather Service has confirmed five tornadoes touched down in Mississippi during the most recent round of severe weather on Wednesday (April 13).

The following twisters were confirmed:

An EF-1 tornado in Edinburg/Arlington, with peak winds of 105 mph and a path length of 11.5 miles.

An EF-1 tornado in Artesia with peak winds of 95 mph and a path length of 5.2 miles.

An EF-2 storm has been confirmed in Clarke County, but National Weather Service officials say they have not completed the survey of the tornado and its damage.

So far, NWS damage survey teams have confirmed 4 tornado paths from Wednesday’s storms. Surveys continue today across the area, as we still have many other areas to assess. pic.twitter.com/jTUh7lMuxR