How US trees are powering Europe’s renewable energy goals 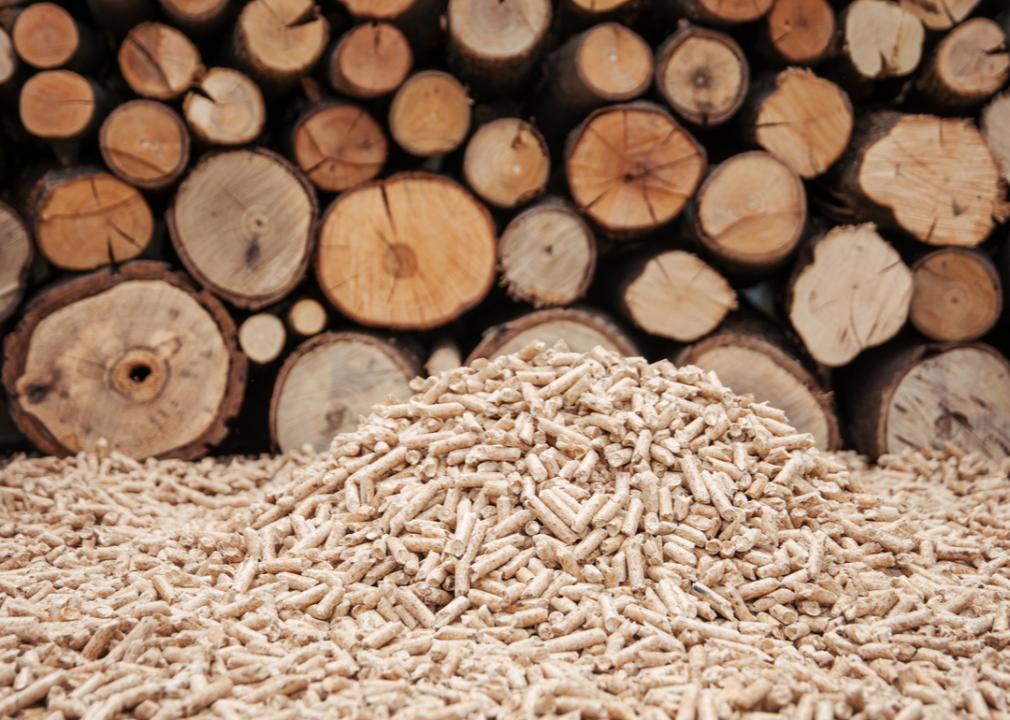 The European Union in 2020 sourced 21.3% of its energy from renewables, surpassing its 2009 goal. With most of the continent’s energy came from oil and petroleum products, its announcement was one of the first ambitious global promises to address climate change. Within the broad range of renewable energy sources Europe relied upon, one source accounted for nearly half of the continent’s renewable supply: biomass.

Broadly, biomass is any organic material used as fuel and can include manure, agricultural or industrial waste, garbage, and most prominently, wood. Burning wood for fuel is nothing new: As countries transition away from coal and other fossil fuels, the popularity of biomass increases, leading to a spike in demand for wood pellets.

Stacker cited data from the International Trade Center, Eurostat, and the Southern Environmental Law Center to examine how the growing wood pellet industry in the U.S. is fueling European energy, despite its controversial environmental reputation.

The 1997 Kyoto Protocol first considered wood pellets a carbon-neutral energy source. The world was beginning to think more seriously about climate change at the time, and pellets became an easy substitute to transition away from coal-powered facilities. Woody biomass companies replant trees while harvesting timber, allowing young forests to absorb carbon while justifying biomass as a renewable energy source. But biomass’s carbon neutrality is not immediate: It takes years for new saplings to meet the carbon-absorption capacity of older trees being harvested. Meanwhile, wood pellets are burned and emit the CO2 once stored by the wood. The resulting carbon debt can take decades for newly planted trees to offset.

Scientists have begun to question the sustainability of woody biomass, and whether the displacement of one fossil fuel is now causing the disruption of forest ecosystems—all while still emitting greenhouse gases. Read on to learn about the complexities of renewable energy.

You may also like: The 90 companies responsible for two-thirds of historical greenhouse gas emissions 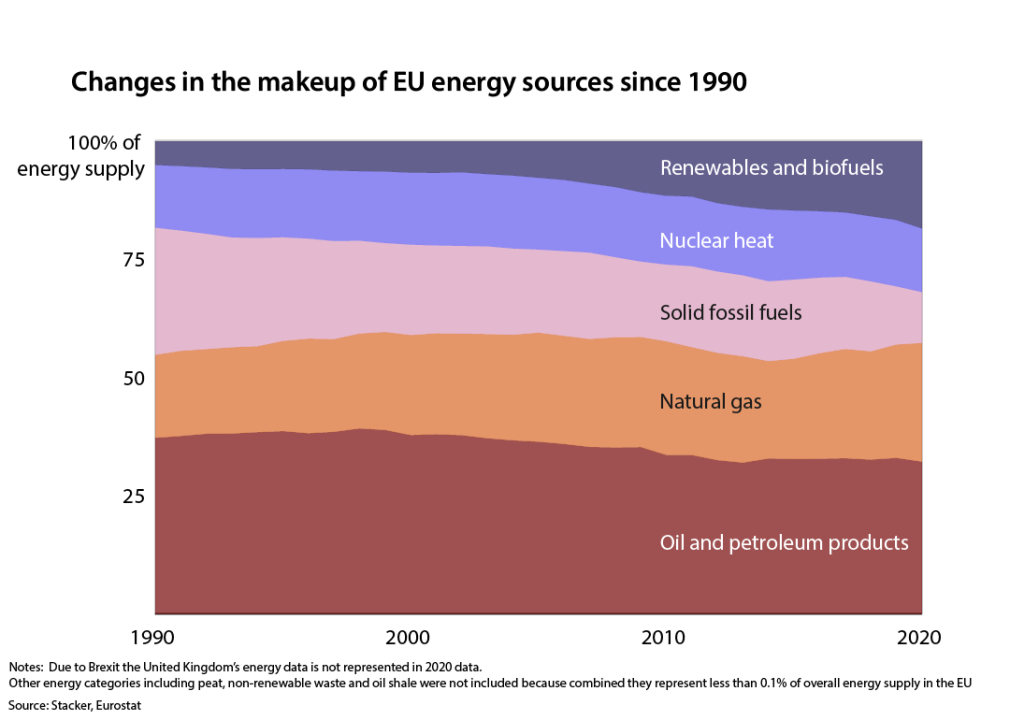 The latest Intergovernmental Panel on Climate Change report, released in April of 2022, warns that efforts to cut greenhouse gas emissions must be taken more seriously. If countries do not make concerted efforts to cut emissions by 2025, the report claims, the world may not be able to prevent global temperatures from rising 1.5 degrees Celsius (or 2.7 degrees Fahrenheit) above pre-industrial levels. Pressure for countries to meet climate promises and curb reliance on fossil fuels has accelerated since the U.N.’s First Earth Summit in 1972, with European Union countries setting ambitious pledges for the coming decades.

Renewable energy supply in Europe has grown 237% since 1990. The United Kingdom has kept up goals even after Brexit, targeting 100% renewable energy by 2035. The growing amount of gigawatts renewables is providing means that demand is accelerating across the renewable sector. 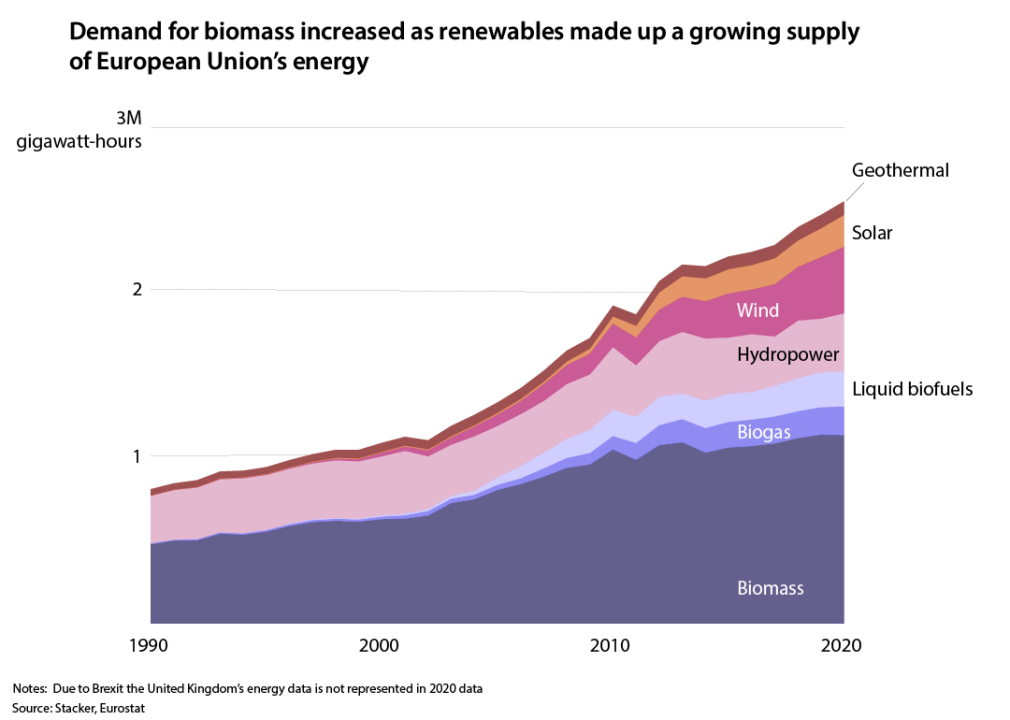 Solar and wind power have shown the fastest growth since 1990, but the EU still gets nearly half of its renewable energy supply from combustible biomass. Solid biofuel data can’t be broken down by origin, meaning the exact scale of wood-sourced biomass in Europe’s energy supply is not available. Regardless, estimates suggest forestry accounts for at least 60% of European biomass.

Biomass plants qualify to receive renewable energy subsidies, which drives their popularity. Biomass subsidies in the EU have remained steady over the past five years. A report from the European Commission’s Directorate-General for Energy found at least €103 billion have benefited biomass plants since 2015, an amount that falls behind the €170 billion and €113 billion spent subsidizing solar and wind respectively.

More than 500 scientists signed a letter to President Joe Biden and the leaders of Japan, the European Council, European Commision, and the United Nations urging against subsidies and incentives for biomass fuel. Last year, the Netherlands—which imported nearly 1.3 million tons of U.S. wood pellets in 2021—ended subsidies on new biomass plants. The country instead seeks to develop a phase-out policy and rely on other renewables. 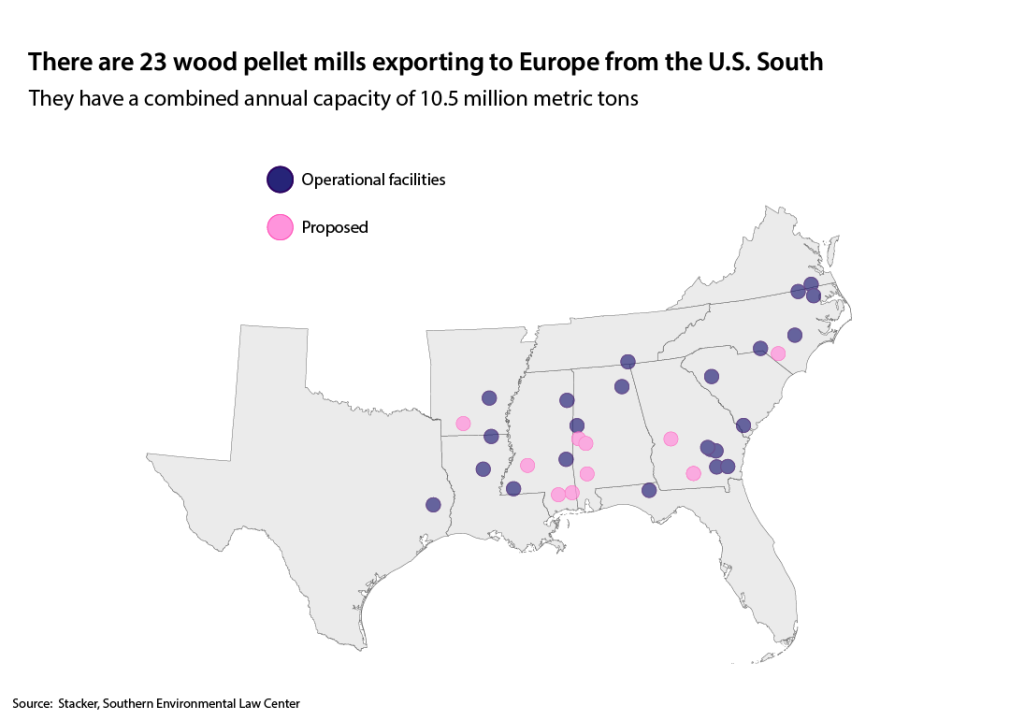 The largest wood pellet mills are in the American South

As pressure mounts—especially in Europe—to meet renewable energy goals, demand for wood pellets rises. Forests in Germany, Sweden, and Latvia have historically been major suppliers of this fuel. To meet the demand of less self-sufficient countries, the U.S. South has become a hub for wood pellet production: More than 23 mills produce a combined capacity of 10.5 million tons of pellets annually. The value of U.S. exports of wood pellets to Europe grew nearly 60% in the last five years.

The South is also home to the American wood pellet industry, thanks in large part to the region’s forests. Forests cover the majority of land in most southern states, and the ecosystems are diverse. But crucially, many of these forests are privately owned. Although states like Washington and Oregon are home to greater forest acreage than southeastern states, most of their ecosystems are publicly owned. The latest estimates for the largest exporters of wood pellets in 2021 showed most forests are privately owned in Georgia, Louisiana, Florida, and Alabama. 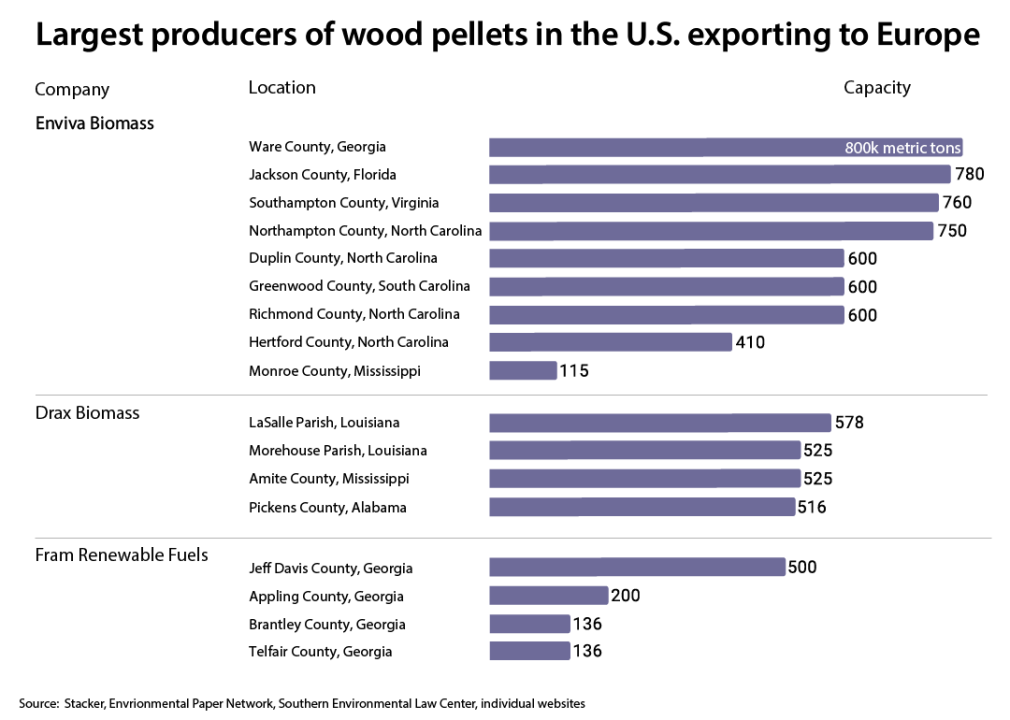 Three companies—Enviva, Drax Biomass, and Fram Renewable Fuels—control two-thirds of wood pellet facilities in the southern U.S that export to Europe, according to data from the Environmental Paper Network and the Southern Environmental Law Center. Other pellet manufacturers operate in the South, like Lignetics, which is consumer and not business-to-business focused.

Built in 1974, Drax power station was the last coal facility in the U.K., originally sourcing coal from the surrounding Yorkshire region. Now, Drax has almost fully converted to biomass, relying on a growing number of mills across North America to power the transition. A 2021 acquisition of Pinnacle Renewable Energy means Drax now owns 17 mills across Canada and the U.S. South.

Enviva has also expanded rapidly to meet the demands of its partners in Europe, the U.K., and Japan. Since 2011, it has opened nine mills with a combined capacity of 5.4 million tons. Enviva is currently building another plant in Lucedale, Mississippi, and has proposals for two additional mills in Mississippi and Alabama.