‘If they want to run the police department, let them run it’: Mississippi police chief angered by decision to delay vote on pay increases, promotions 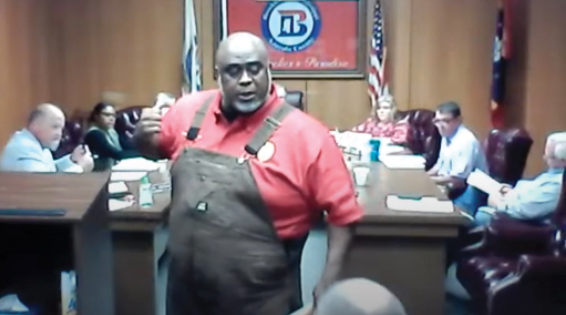 Screen grab from YouTube Brookhaven Police Chief Kenneth Collins tells his officers, “Let’s go,” prior to leaving the Board of Aldermen meeting Tuesday.

Brookhaven’s top police officer and the City’s Board of Aldermen did not see eye-to-eye Tuesday on recommended promotions within the police department.

Three aldermen were physically present at the meeting, while four joined the meeting via phone from an annual municipal leaders conference on the Gulf Coast.

After the aldermen approved the minutes and voted to hire a laborer in the Water Department and an operator in the Solid Waste Department with no discussion, Mayor Joe Cox moved to items 3 and 4 on the agenda — approving two promotions within Brookhaven Police Department.

The first was for Timothy Sander, from patrolman to Detective Sergeant, with a salary increase from $34,562.14 to $45,046.75. Sergeant is the first rank for an investigator within the department.

The second was for Penelope Banks from Detective Sergeant to Detective Lieutenant, with an increase from $45,046.75 to $51,134.10. The only other detective rank is captain — held by investigator Clint Earls.

As Chief Kenneth Collins called the two officers into the boardroom and they stood near the podium, Alderman-at-Large Don Underwood voiced a concern over the first promotion up for consideration, citing in part the large increase in pay.

“Mr. Mayor, this is a really significant change, $11,000, and the only thing — and I’m not against it, I’m not criticizing it — but because there’s only three of us here tonight, I think it would be appropriate if we waited on [both] if we did [both] at the next meeting,” Underwood said.

“No, that’s not going to work,” Collins said.

Underwood began to make a motion and the chief interjected, “Can I say this?”

“No, sir, because you’re not an alderman,” Underwood responded.

“I don’t need to be an alderman. I’m the chief of police, buddy. You know what I’m saying?” Collins said.

“Oh, yeah,” Underwood said, and introduced his motion. “I move that we table this until the next board meeting.”

“No, no. That ain’t going to work,” Collins said, as Ward 2 Alderman Shannon Moore seconded the motion via phone.

“You know you’re going to second that. These are my two officers,” Collins said as he began to talk about their years of experience.

“You can’t hold the police department up because we got aldermen on the Coast … but just like y’all approved these other two, they deserve to be approved just like the rest of them,” the police chief said.

“She’s got 19 years,” Collins said, pointing to Banks and then Sander, “and this gentleman here has got nine years. We can’t hold our police department up because y’all are somewhere else. … I deserve for all of my people to be approved just like these others.”

Cox called for a vote on the motion and second to table the matter until the next regular meeting May 3. With raised hands and “aye” votes, all but Ward 5 Alderman Fletcher Grice voted in support. Grice abstained.

When Cox said the motion carried, Collins stood and pointed to his personnel.

“Let’s go, officers,” he said. “Let’s go. Let’s go. If they want to run the police department, let them run it. We’re not going to put up with this crap. Let’s go.”

After a few moments of silence, the meeting continued its agenda.

“I was elected to do my job,” Chief Collins said Wednesday. “They need to let me do my job.”

The entire public meeting can be viewed online on the City’s YouTube channel.