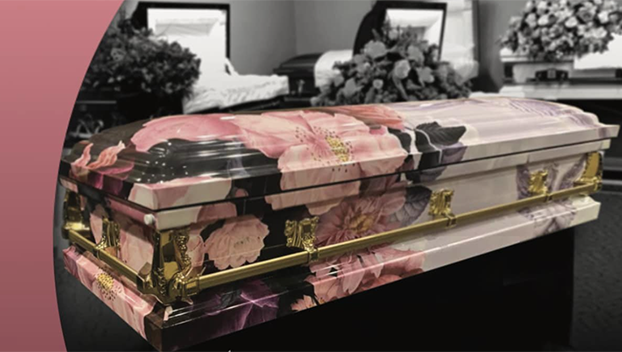 Every time he accepts a new order, Casey Lawhon feels the pain all over again.

The 25-year-old Gulfport man began a new business of wrapping caskets after his sister and best friend, Raelan Lawhon, died in January.

Casey and Raelan, who grew up in McHenry and attended Stone High together, were inseparable. After high school, both moved to Gulfport and lived next door to each other until Raelan died after being given an oxycodone pill that was unknowingly laced with fentanyl.

At the time of her death, Casey had owned his car wrapping business called KC Wraps for four years, and his baby sister would often help him at the shop. He had the supplies to do something special for Raelan’s casket.

“I just had to … I knew I could design it with something good,” he told the Sun Herald.

He chose to incorporate gray clouds, flowers with pink hues to celebrate Raelan’s favorite colors, and angel statues. He posted photos and a video to his Facebook page, and it got over 24,000 views in less than a day.

Casey said it was “the one last thing I wanted to do for my sister.”

Three months have passed since Raelan’s death, but Casey hasn’t stopped creating the custom pieces of artwork for caskets of young ones who were lost too soon.

After the video of Raelan’s casket went viral, people begged Casey to turn it into a business. At first he was hesitant, because he didn’t want it to seem like he was exploiting tragedy for profit.

“I was more afraid of feeling like I was turning this into an investment opportunity,” he said.

Then the parents of an 18-month-old boy called. Casey couldn’t say no. Casey did the casket for the toddler.

And a 2-year-old boy who drowned.

Casey has officially started the business In Memory Casket Wraps. Everything he needs fits into a trailer that’s mobile, so he can wrap the caskets at the funeral home.

Most recently, he created a blue and pink wrap for Alexis Pierson, a teen girl from the Bayside Park community in Hancock County who died in an accidental shooting. She had dreams of being a TikTok star, and Casey created a vibrant wrap that honored her love for the social media platform.

Pierson’s wrap was paid for by the community in about an hour, he said.

“I don’t even think about the money,” he said. “If anything, I’m just sharing a fraction of pain that the families are going through. It just opens up that wound, and it brings me back to day one (when Raelan died).”

But what would hurt worse, Casey said, would be turning families away. “It brings peace and I love being able to keep my sister’s name alive.”