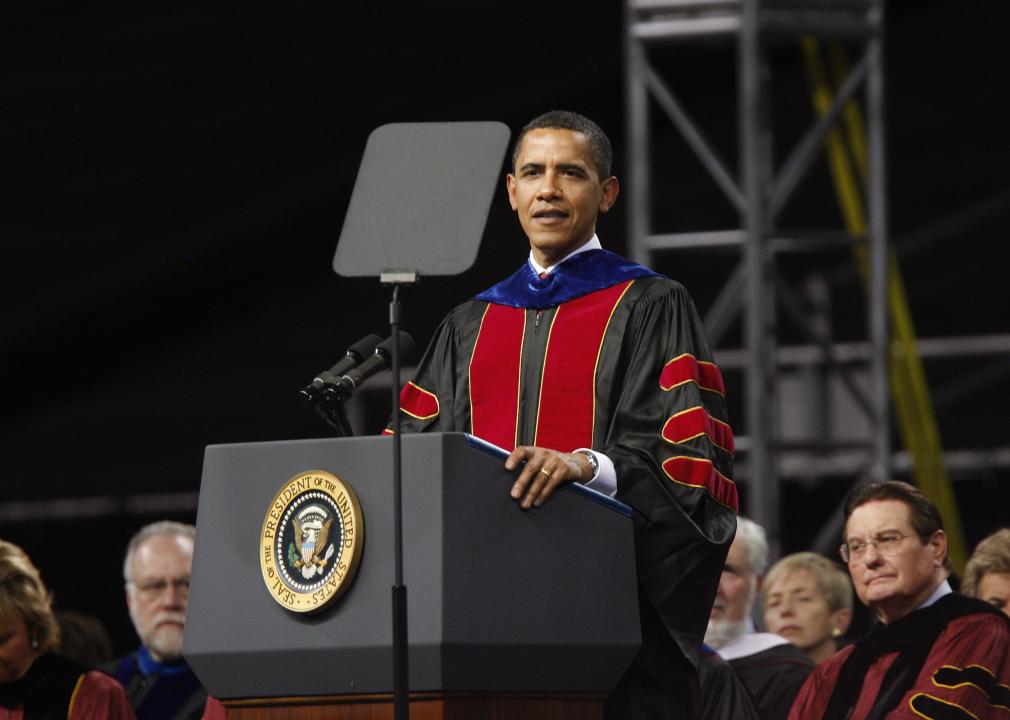 The excitement surrounding college graduation ceremonies leaves many future alumni wondering if they’ll remember anything beyond their name being announced, receiving their diploma, then moving their mortarboard tassels from the right side to the left.

Despite the adrenaline rush, students often tune in when a good commencement speaker steps behind the lectern. The graduation tradition of having politicians, comedians, authors, public figures, actors, and other celebrities delivering these speeches further kicks up anticipation. When powerful enough, the words spoken can stick for a long time in memories.

Even fake commencement speeches can proffer excellent advice and become part of history. Case in point, a speech purportedly given by Kurt Vonnegut that began, “Ladies and gentlemen of the class of ’97: Wear sunscreen.” (The speech was actually written in a column by Chicago Tribune writer Mary Schmich.)

As you can see, wisdom put forth by renowned orators often becomes a part of history. Such is the case with the following 10 commencement speeches compiled here by College Ave for their inspiring messages for graduates. 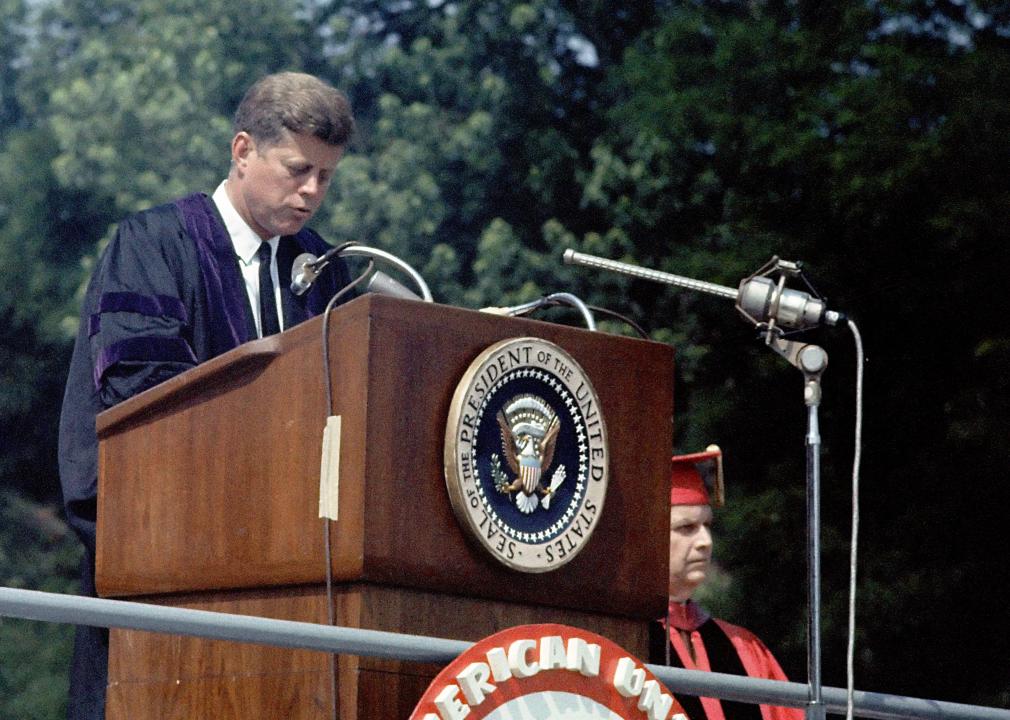 World peace was the powerful theme of John F. Kennedy’s commencement speech delivered to the 1963 graduating class of American University.

Two years prior to this commencement address, Kennedy was sworn in as the 35th president of the United States. Kennedy also used the American University speech to announce opening talks with Moscow on a test ban treaty, as well as a declaration that the U.S. would not conduct nuclear tests in the atmosphere. 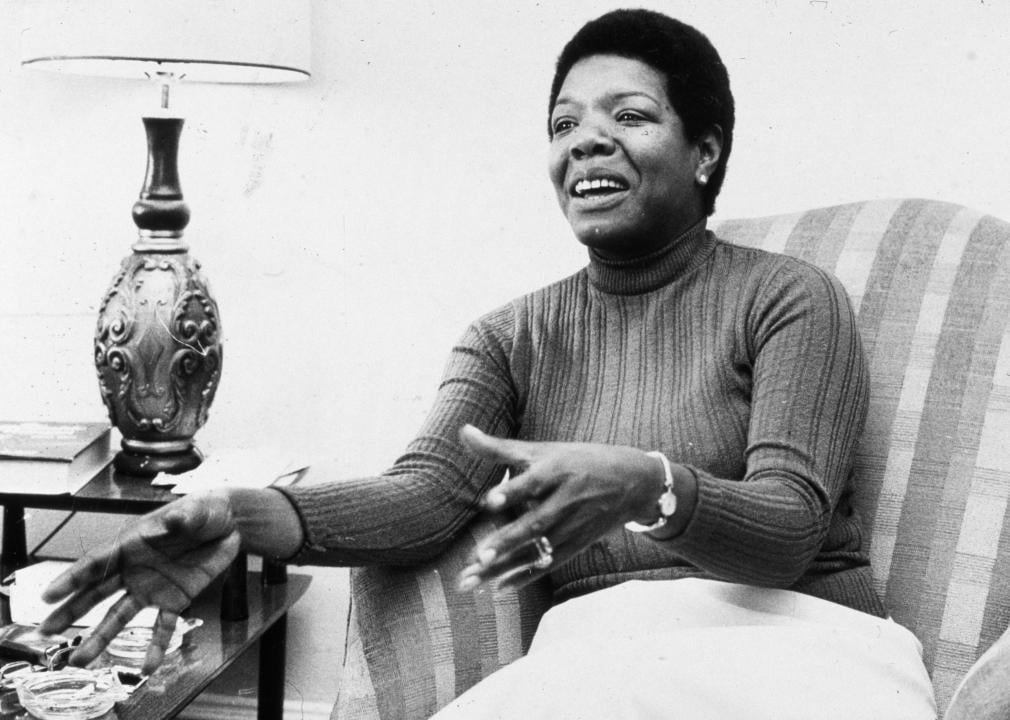 When addressing the 1977 graduating class of the University of California, Riverside, Angelou posed this question: “…it would seem that the trouble for you is not just how to get out of this institution, but once out, what does one do? Does one simply sit with that diploma and say, ‘I have found the one way, the true way for myself and I call all the others false.’ Or do you indeed join life, that is the challenge.” Yes, it’s easy to understand why Angelou was called on to present 18 commencement speeches in her lifetime.

How did Angelou answer that question for herself? She achieved greatness throughout her life as a civil rights activist, professor at Wake Forest University, an acclaimed poet, and a bestselling author of 36 books—including the iconic novel, “I Know Why the Caged Bird Sings.” In 2010, President Barack Obama presented Angelou the Presidential Medal of Freedom. In 2015, the United States Postal Service released a special Forever stamp in her honor. Additionally, the U.S. Mint’s American Women Quarters Program released a quarter bearing Angelou’s image. 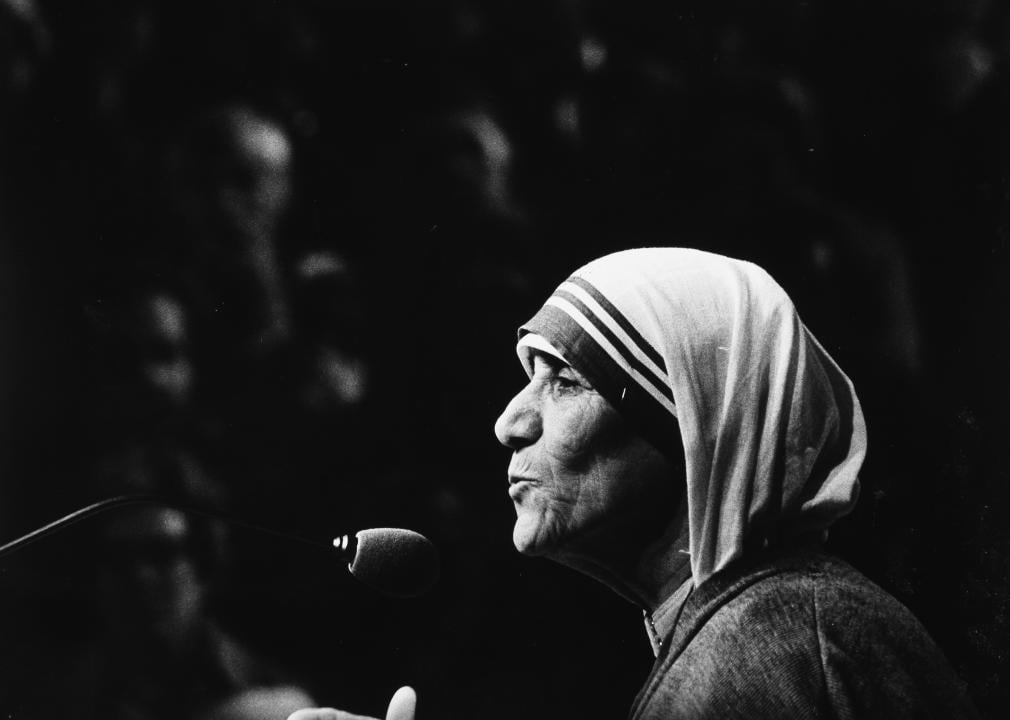 “You have received many things to guide you, protect you, to lead you in the right paths. Remember that it has been given to you, not to keep, but to share. The greatest grace: share gift.” This quote from Mother Teresa was made during her commencement address to the 1982 class of Niagara University. That same year, she would also deliver commencement speeches to Harvard University and Thomas Aquinas College.

Born in 1910 as Agnes Gonxha Bojaxhiu in Skopje, Macedonia, Mother Teresa felt called to serve her faith at a young age, becoming a nun at 18. For many years, she taught at St. Mary’s High School in Kolkata (formerly Calcutta) and later became the school’s principal. Drawn to help the sick and poor, she left to work in the Calcutta slums.

Mother Teresa’s humanitarian work led to her founding the Order of the Missionaries of Charity, establishing an open-air school, a home for the dying destitute, a leper colony, an orphanage, family and mobile health clinics, and a care facility for HIV/AIDS patients.

In recognition of her life’s work, Mother Teresa was awarded the 1979 Nobel Peace Prize. Six years after her death in 1997, Pope John Paul II beatified her in 2003. In 2016, she was canonized by Pope Francis, becoming recognized by the Catholic church as Saint Teresa of Calcutta. 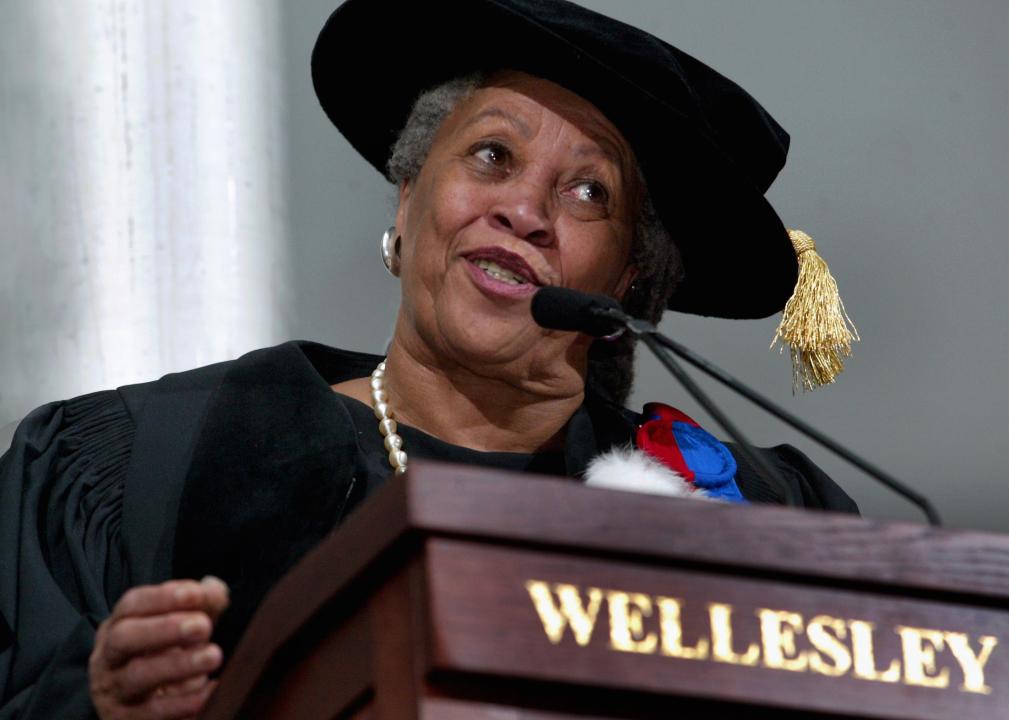 With her commencement speech, Toni Morrison charged the Wellesley College class of 2004 to “go out and save the world.”

“I am a teller of stories and therefore an optimist, a believer in the ethical bend of the human heart, a believer in the mind’s disgust with fraud and its appetite for truth, a believer in the ferocity of beauty,” the award-winning author continued. “So, from my point of view, which is that of a storyteller, I see your life as already artful, waiting, just waiting and ready for you to make it art.”

Morrison earned an English degree from Howard University, followed by a master’s from Cornell University. She’d go on to teach at Howard, Texas Southern University, Yale, and Princeton before entering the publishing world as an editor at Random House.

It wasn’t until she was 39 that Morrison hit the scene as an author, releasing her first book, “The Bluest Eye.” She’d go on to write 11 novels that explored the Black experience in America, including “Beloved,” which won a Pulitzer Prize in 1988. More accolades were to come Morrison’s way. In 1993, she became the first African American woman to win a Nobel Prize in Literature. Then, in 2012, Barack Obama honored her with the Presidential Medal of Freedom. But perhaps her most apt honor came in 2000 when the Library of Congress recognized Morrison as a Living Legend. 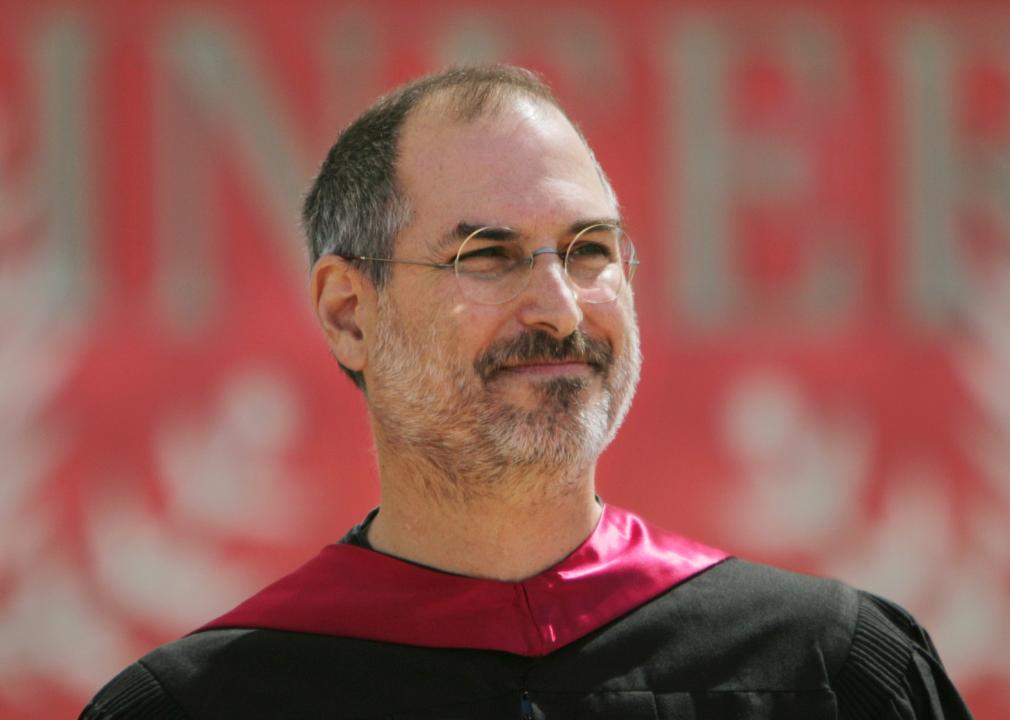 One of the first things Steve Jobs revealed in his commencement address to Stanford University’s class of 2005 was that he dropped out of Reed College his freshman year. “I had no idea what I wanted to do with my life and no idea how college was going to help me figure it out,” Jobs shared. He eventually audited classes that spurred his curiosity. What he couldn’t see at the time, he said, was that “you can’t connect the dots looking forward; you can only connect them looking backward. So, you have to trust that the dots will somehow connect in the future. You have to trust in something—your gut, destiny, karma, whatever.”

Following this credo, at age 20, Jobs launched Apple in his parents’ garage with Steve Wozniak. Soon, he became recognized as a pioneer in the personal computer era. Ten years later, Apple had 4,000 employees and was valued at $2 billion. Then, Jobs was fired. “Sometimes life hits you in the head with a brick,” he told Stanford grads. “Don’t lose faith.”

Jobs looked at being fired from Apple as a gift. He viewed his cancer diagnosis the same way. As he told Stanford grads, “Because almost everything—all external expectations, all pride, all fear of embarrassment or failure—these things just fall away in the face of death, leaving only what is truly important.” 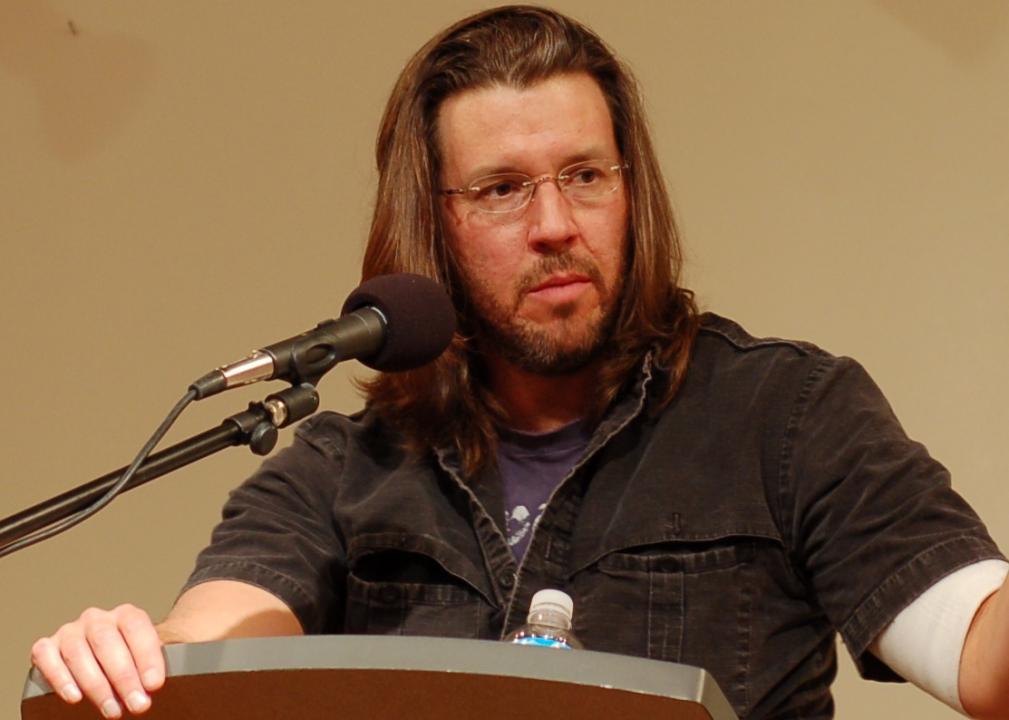 “It will actually be within your power to experience a crowded, hot, slow, consumer-hell type situation as not only meaningful, but sacred, on fire with the same force that made the stars: love, fellowship, the mystical oneness of all things deep down.” This was David Foster Wallace’s message to the 2005 graduating class of Kenyon College—you have a choice in how you perceive and think about things. The speech, “This Is Water: Some Thoughts, Delivered on a Significant Occasion, about Living a Compassionate Life,” was later released as a book and short film. 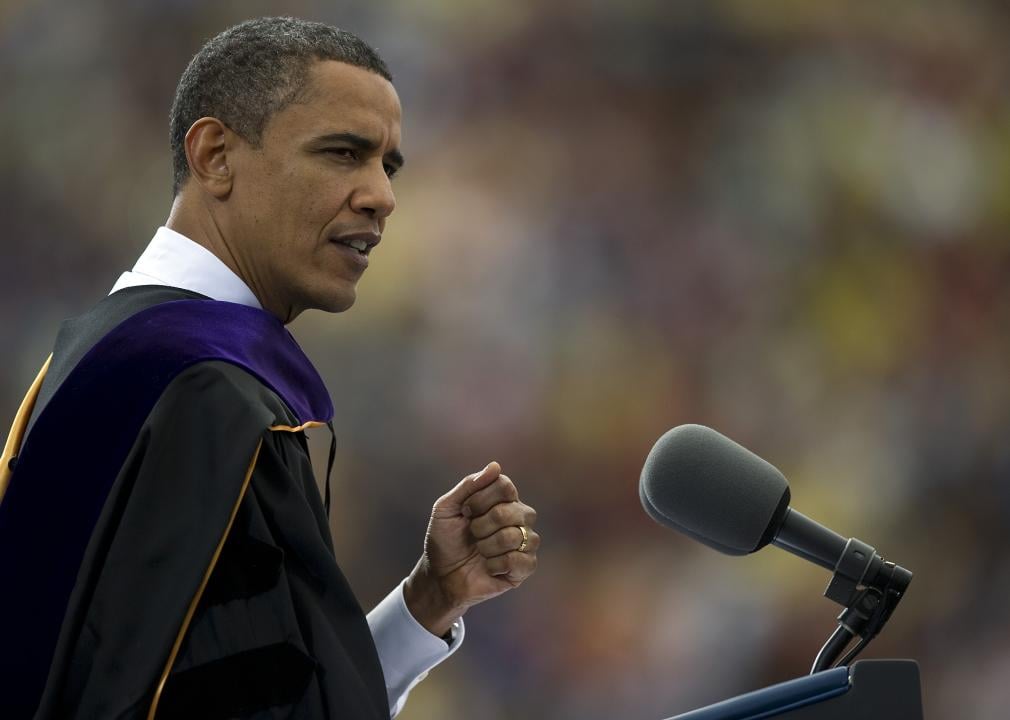 The University of Michigan’s graduating class of 2010 had none other than the president of the United States deliver their commencement address. The 44th U.S. president recalled the actions of generations of Americans who shaped the country through toil, endurance, imagination, and faith.

In part of his speech, he said: “You, too, will have to strive. You, too, will have to push the boundaries of what seems possible. For the truth is, our nation’s destiny has never been certain. What is certain—what has always been certain—is the ability to shape that destiny. That is what makes us different. That is what sets us apart. That is what makes us Americans—our ability at the end of the day to look past all of our differences and all of our disagreements and still forge a common future.” 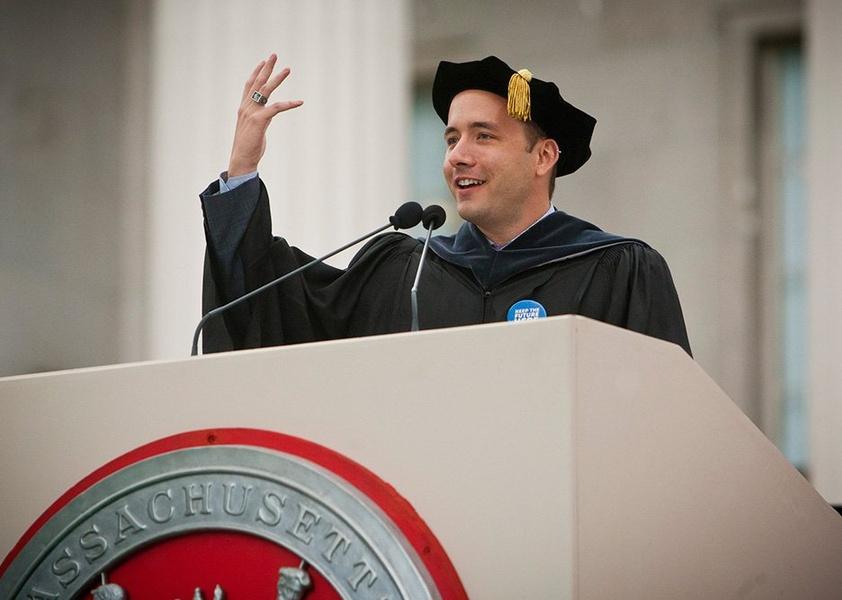 When Dropbox CEO Drew Houston gave the 2013 commencement speech at his alma mater, he supplied graduates with a cheat sheet for success. The sheet included three items: a tennis ball, a circle, and the number 30,000. Perhaps the most inspirational takeaway was his final quote: “Instead of trying to make your life perfect, give yourself the freedom to make it an adventure, and go ever upward.”

Houston, a 2005 alum of Massachusetts Institute of Technology, recalled his own entrepreneurship journey in the speech, one filled with ups, downs, and curves. He shared: “Your biggest risk isn’t failing, it’s getting too comfortable.” After exploring several business ventures, he and fellow MIT classmate Arash Ferdowsi launched Dropbox, a cloud storage provider, in 2007. Houston was 24 at the time. Today, at age 39, Houston’s net worth is $1.6 billion. The wisdom he shared with MIT’s class of 2013? Priceless. 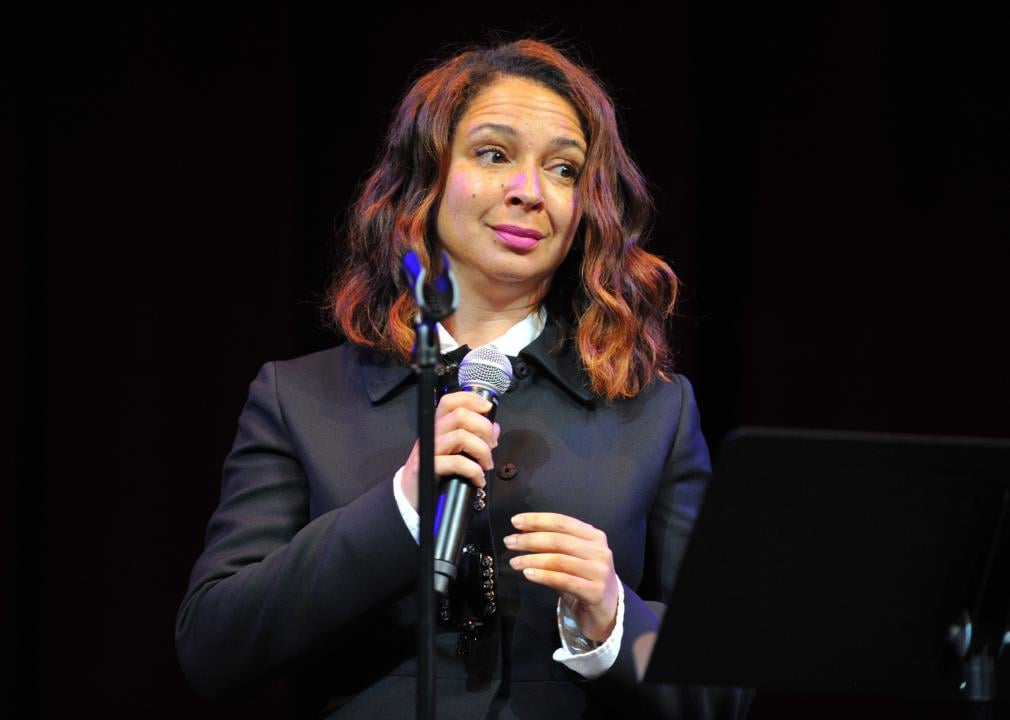 “Say yes and create your own destiny,” was the advice Maya Rudolph gave in her commencement speech to Tulane’s 2015 graduating class. At the event, Green Envy, an a cappella group, paid homage to Rudolph’s mother, Minnie Riperton, with a rendition of her 1974 hit “Lovin’ You.” In the audience was Maya’s father, record producer and 1968 Tulane graduate Richard Rudolph.

As for Maya, she graduated from the University of California at Santa Cruz’s Porter College in 1995, earning a Bachelor of Arts in photography. To Tulane grads, she recalled, “During senior year, my father asked me what I planned to do after I graduated. I told him, ‘I want to be on ‘Saturday Night Live.’”

Rudolph fulfilled that dream, and was featured as a cast member on the NBC series from 2000 to 2007. Since then, the winner of four Primetime Emmy Awards has gone on to star in films like “Bridesmaids” and “Licorice Pizza.” 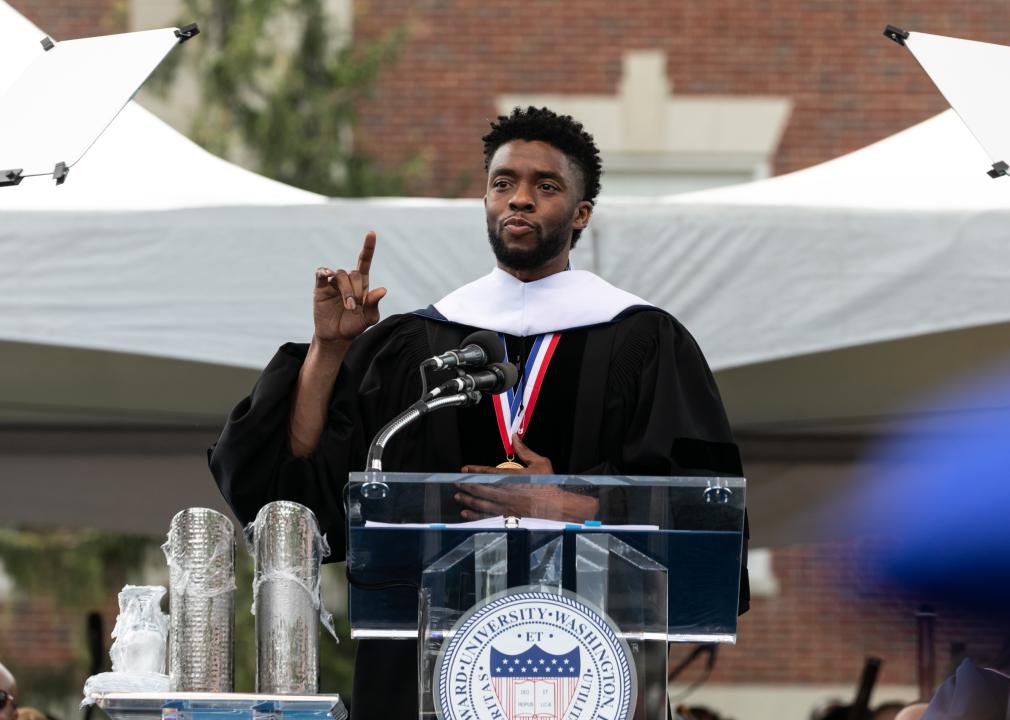 Actor Chadwick Boseman took the stage at Howard University’s 150th commencement ceremony. In 2000, the star of Marvel’s “Black Panther” film series graduated from Howard with a Bachelor of Fine Arts in directing.

Boseman shared his post-college journey and the need to find purpose with graduates. “Sometimes you need to feel the pain and sting of defeat to activate the real passion and purpose that God predestined inside of you,” he said. Boseman also recalled how his show business path had been going quite smoothly after his graduation—he’d just landed his first role in a soap opera—until he spoke up about stereotypes. He was fired the next day.

“As you commence to your paths, press on with pride and press on with purpose,” Boseman advised Howard grads. He did just that in his film career, often portraying icons including Thurgood Marshall, James Brown, and Jackie Robinson. Boseman, who died in 2020 from colon cancer at 43, was nominated for an Oscar in 2021 for his role in “Ma Rainey’s Black Bottom.”

In May 2021, Howard unveiled the Chadwick A. Boseman College of Fine Arts in his honor. The university’s announcement stated, “Chadwick Boseman was fueled by purpose, and sought to fulfill that purpose through writing, directing, acting and activism.”

This story originally appeared on College Ave
and was produced and distributed in partnership with Stacker Studio.