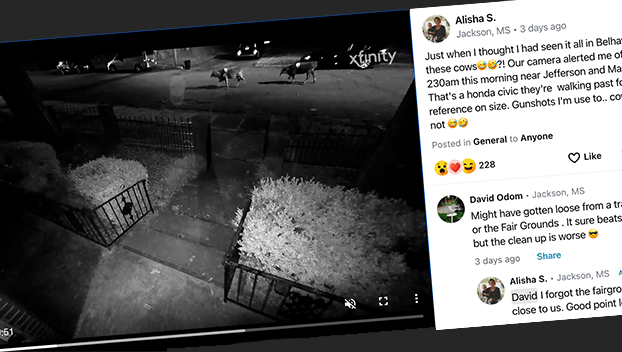 One Mississippi resident was udderly shocked when she glanced at the video from her home surveillance system and saw two cows taking an early morning stroll down her city neighborhood street.

Such a sight might not be too uncommon for some rural residents, but this bovine sighting was in the middle of Mississippi’s largest city Jackson.

Security cameras captured the cows at about 2:30 a.m. Saturday in the area of Jefferson and Manship streets in Jackson.

“Just when I thought I had seen it all in Belhaven… Are these cows?” the post said.

Michael Lasseter, director of the State Fairgrounds, confirmed that some of the cows that were at the fairgrounds for the Dixie Challenge rodeo were able to get out because of a loose latch on a fence.

Lasseter said he did realize that the cows had strolled more than a mile away to the Belhaven neighborhood where Shaw lives. Lasseter said the cows were found on High Street outside Gate 10 at the fairgrounds and returned inside the fence.

Lasseter did not deny the cows had taken their midnight stroll, but was glad that the cows and no one else was injured.

Prior to the bovine breakout, new gates had already been ordered for the fairground.

Man charged with murder and six other felonies in…