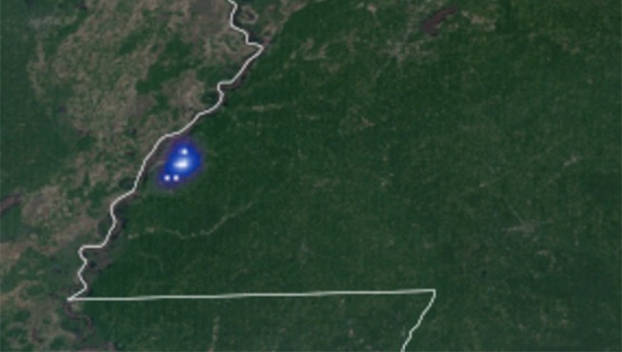 GLM image from the GOES 16 satellite. (Courtesy of MEMA)

The sighting was soon followed by numerous reports of loud booms heard in Claiborne and surrounding counties. 22,000 miles out in space, the Geostationary Lightning Mappers onboard the GOES 16 and 17 satellites detected several bright flashes associated with the fragmentations of this bolide, which was first spotted 54 miles above the Mississippi River near the Mississippi town of Alcorn.

The object — thought to be a piece of an asteroid about a foot in diameter with a weight of 90 pounds — moved southwest at a speed of 55,000 miles per hour, breaking into pieces as it descended deeper into Earth’s atmosphere.

It disintegrated approximately 34 miles above the swampy area north of Minorca in Louisiana. The fragmentation of this fireball generated an energy equivalent of 3 tons of TNT, which created shock waves that propagated to the ground, producing the booms and vibrations felt by individuals in the area.

At its peak, the fireball was over 10 times brighter than the Full Moon.

Anna Guizerix of The Vicksburg Post contributed to this report.