Jockeys with the most Kentucky Derby wins 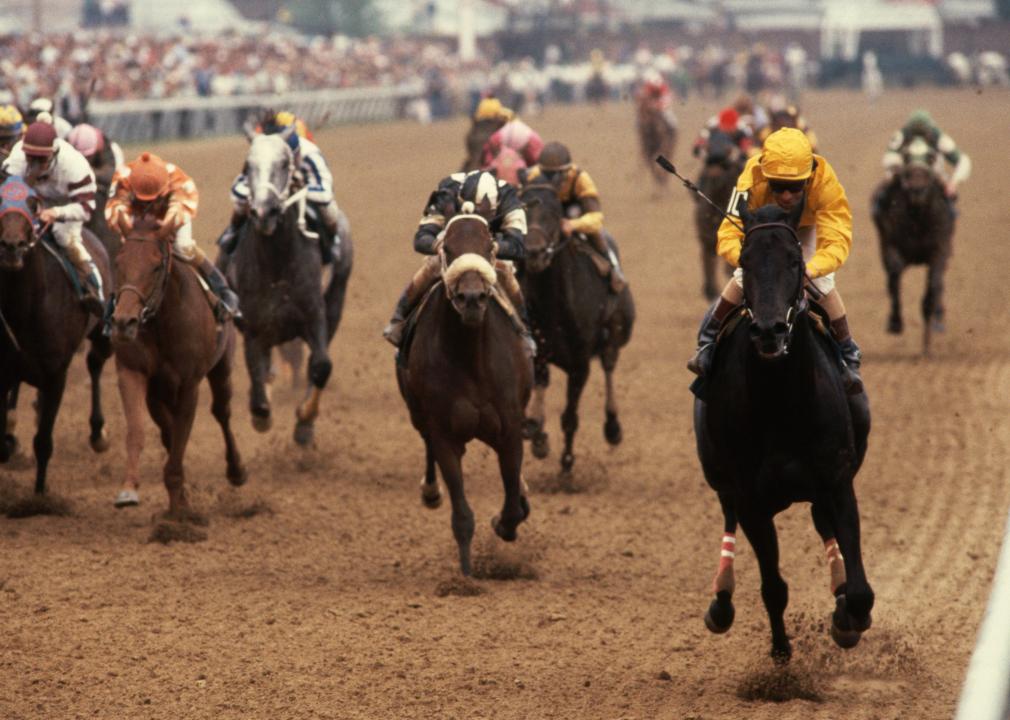 Jockeys with the most Kentucky Derby wins

Audacious hats, mint juleps, and … thoroughbreds. The anticipation of the revelry that makes up the Kentucky Derby has been going strong since its 1875 inception. Each year, it is the first event of the Triple Crown of Thoroughbred Racing series, which also includes Maryland’s Preakness Stakes and the New York’s Belmont Stakes.

The Derby is usually held the first Saturday in May at Churchill Downs in Louisville, Kentucky. As for the action—also known as “The Run for the Roses”—it takes approximately two minutes from the start to finish. A glorious two minutes. It’s during those minutes in this race that enthusiasts have had the opportunity to watch the graceful beauty of steeds like Aristides, Flying Ebony, Gallant Fox, Secretariat, Ferdinand, American Pharoah, and Justify, to name a few.

Bringing those magnificent creatures across the finish line are jockeys, many of whom have devoted their entire lives to the sport. Beyond training and talent, size is a factor in the ability to race as a jockey. The average height of a jockey is generally between 4 feet, 10 inches and 5 feet, 6 inches with a weight between 108 pounds and 118 pounds. At these proportions, they must maintain the physical strength to control the thoroughbreds that average 5 feet, 4 inches (or 16 hands) at the withers; weigh-in at 1,000 pounds; and achieve speeds up to 44 mph.

How long does a jockey’s career last? William Shoemaker took a Derby win at 54 and was 59 when he retired. As for today’s jockeys, who’s to say—they’re still pushing boundaries.

It’s not known yet who will make history at 2022’s Kentucky Derby, but citing data maintained by the Kentucky Derby, Stacker features 10 jockeys with the most Derby wins. 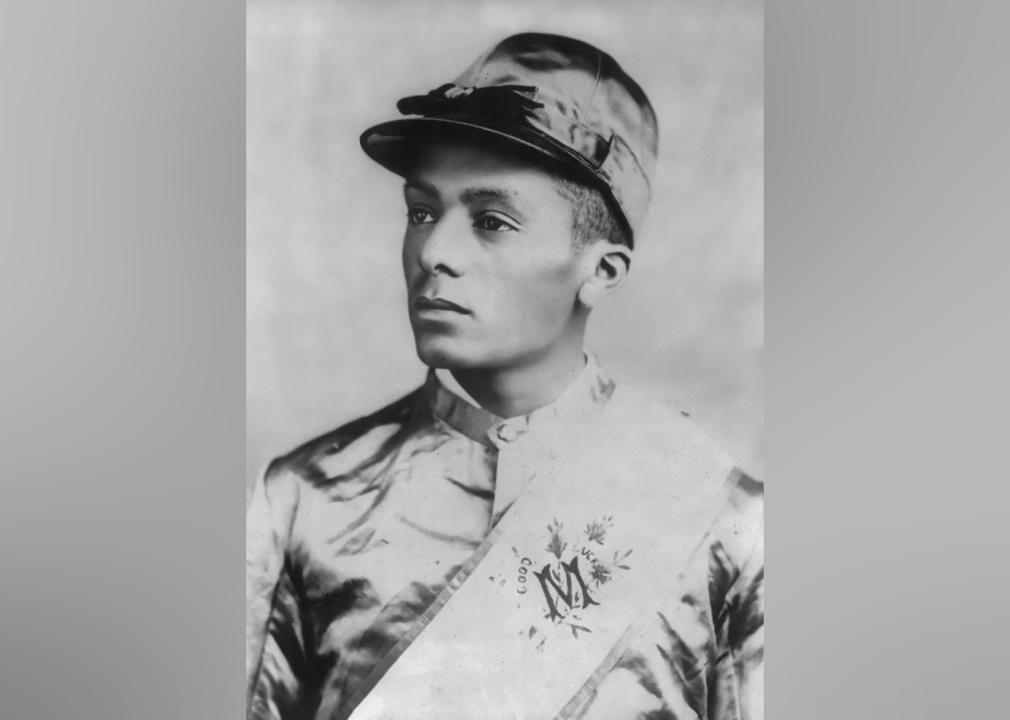 Isaac Murphy was born in Frankfort, Kentucky, and it landed him in horse country. As a boy, he became an exercise rider, making the leap to a Churchill Downs replacement rider by 14. Though he finished last in that race, the young African American would break records, becoming the first back-to-back, three-time Kentucky Derby winner. He is credited with 530 wins from 1,538 mounts.

Murphy died of pneumonia in 1896 at 35. In 1955, he was in the inaugural class of inductees into the National Museum of Racing and Hall of Fame in Saratoga Springs, New York. Murphy’s body was exhumed in 1967 from its original burial site and moved to a plot at the entrance of the Kentucky Horse Park in Lexington, Kentucky, beside Man o’ War, a racehorse considered one of the all-time greatest winning thoroughbreds. 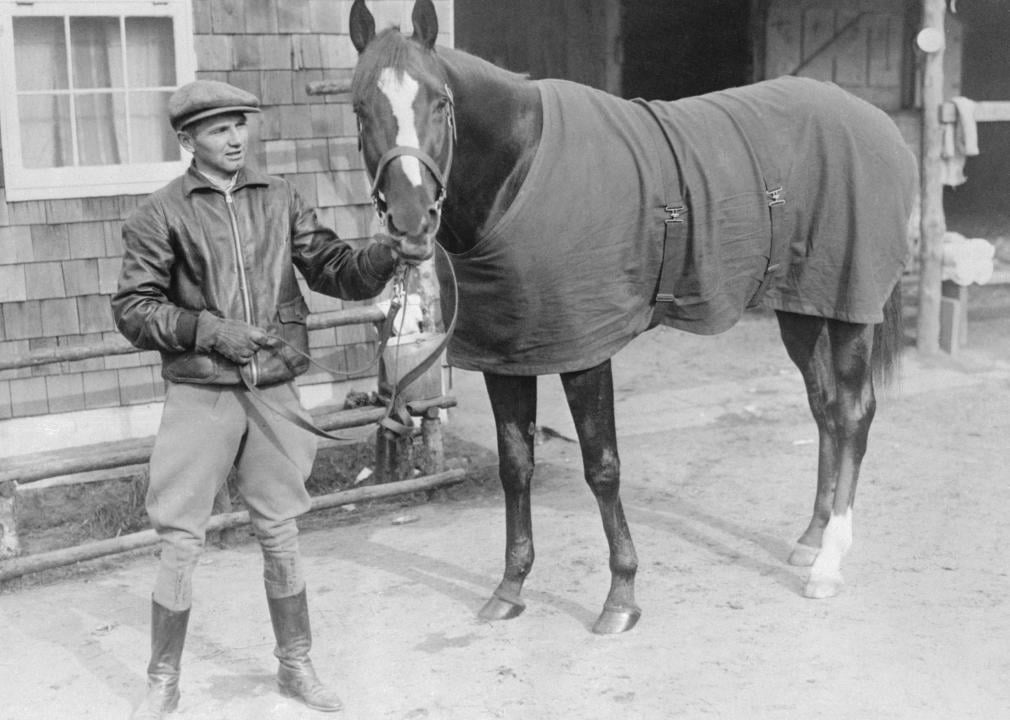 After retiring in 1932, Sande went on to become a trainer and the owner/operator of a racing stable. The call of the track saw him coming out of retirement in 1953 at 55, taking one win, and Sande was inducted into the National Museum of Racing and Hall of Fame in 1955. He passed away in 1968, but was immortalized through the poetry of author Damon Runyon. 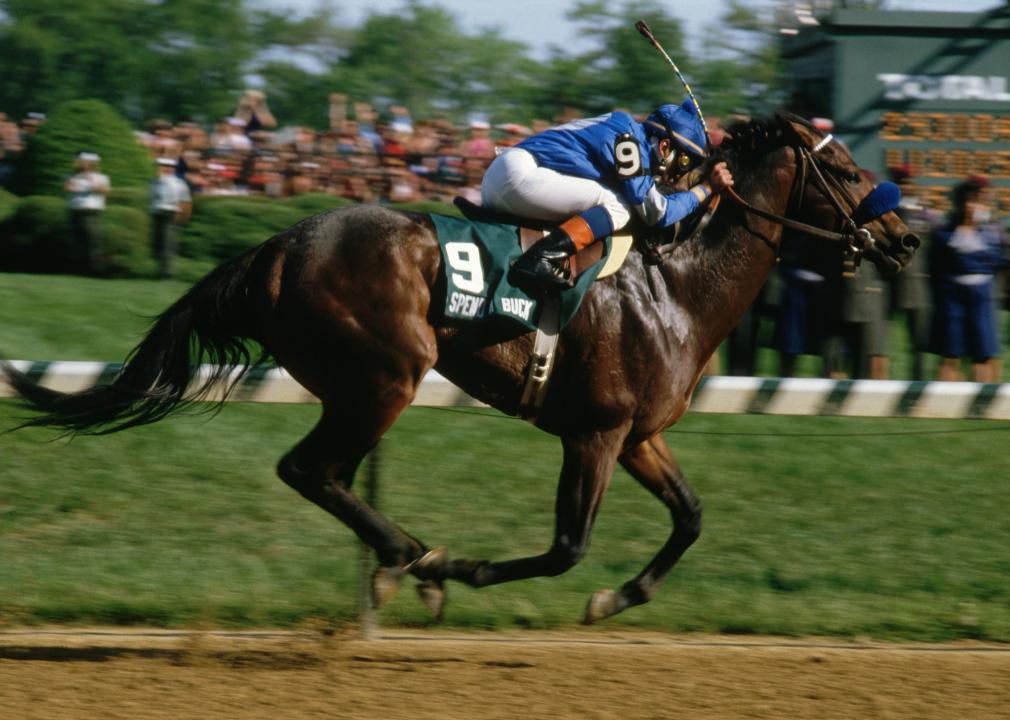 Angel Cordero Jr. has horse racing in his blood. His grandfather, father, and uncles were all thoroughbred riders and trainers. He moved from Puerto Rico to the United States in 1962, becoming the leading North American rider in 1968. Cordero has 38,658 mounts and 7,057 wins under his belt. His bevy of accolades—including winning the Eclipse Award for Outstanding Jockey in 1982, 1983, and 1985—led to his becoming the first Puerto Rican inducted into the National Museum of Racing and Hall of Fame in 1988, which lists his earnings near $165 million. During his career, Cordero won six Triple Crown event races—three Kentucky Derbys, two Preakness Stakes, and one Belmont Stakes.

During a 1992 race at Aqueduct in New York, Cordero was thrown into a pole, injuring his lungs and intestines, and losing his spleen. It was his 24th serious accident. Though Cordero retired that year to become a trainer, he returned to the saddle in 1995 to compete in the Breeders’ Cup. For 12 years, he was married to Marjorie Clayton, a jockey-turned-trainer who died in 2001. 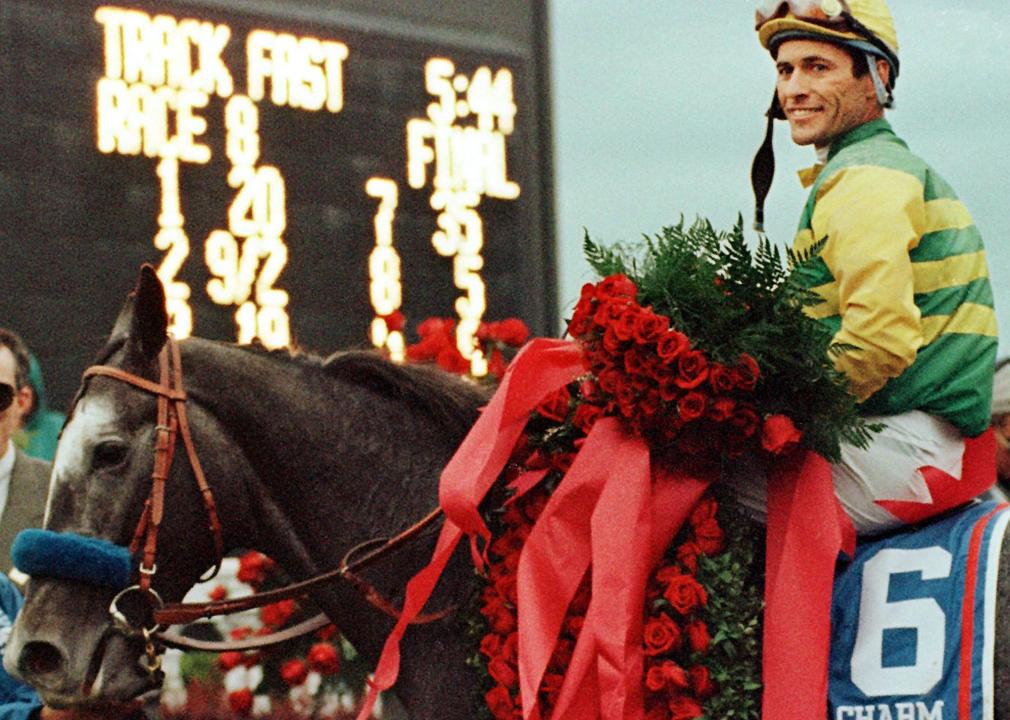 Gary Stevens was 16 when he won his first horse race at Idaho’s Les Bois Park. This kicked off a career that would see him becoming a horse racing superstar. A few of his wins came in threes: three Kentucky Derby wins, as well as trios in both the Preakness Stakes and Belmont Stakes. He also holds 11 Breeders’ Cup wins. Other accolades include induction into the National Museum of Racing and Hall of Fame in 1997, and taking the Outstanding Jockey Eclipse Award in 1998.

In 2006, Stevens proclaimed retirement, but seven years later, in 2013, he won the Preakness Stakes and two Breeders’ Cups. Another Breeders’ Cup win would come in 2016. Before his 2018 retirement, Stevens had amassed 29,442 mounts; 5,187 wins; and $258,217,768 in earnings. These days, Stevens is in front of the camera as a television analyst for Fox Sports and the New York Racing Association. He also made an appearance in the 2003 film “Seabiscuit,” portraying real-life jockey George Woolf. 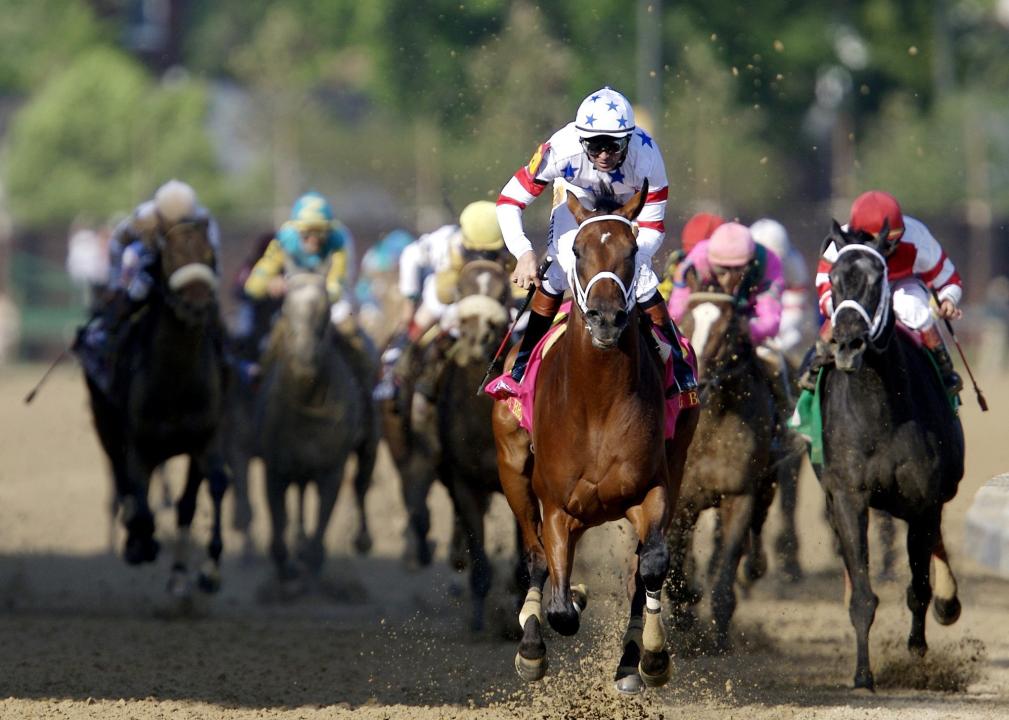 Kent Desormeaux grew up riding horses on his family’s Louisiana farm and competing locally. Like Gary Stevens, Desormeaux won his first official thoroughbred race at 16. Hooked, he quit high school and went pro—a move that paid off. In 1989, at 17, he received the Eclipse Award for Outstanding Apprentice, which he followed up with Eclipse Awards for Jockey in 1989 and 1992. As a teen, Desormeaux grabbed North America Leading Rider wins in 1987, 1988, and 1989. And he was just getting started.

Desormeaux went on to have an illustrious career that saw him taking three Kentucky Derbys, two Preakness Stakes, one Belmont Stakes, and six Breeders’ Cups. He was inducted into the National Museum of Racing and Hall of Fame in 2004 and is listed at 32,471 mounts and 6,112 wins, making him #18 of all time. As #6 purse winner of all time, so far Desormeaux has brought home $290,406,258. 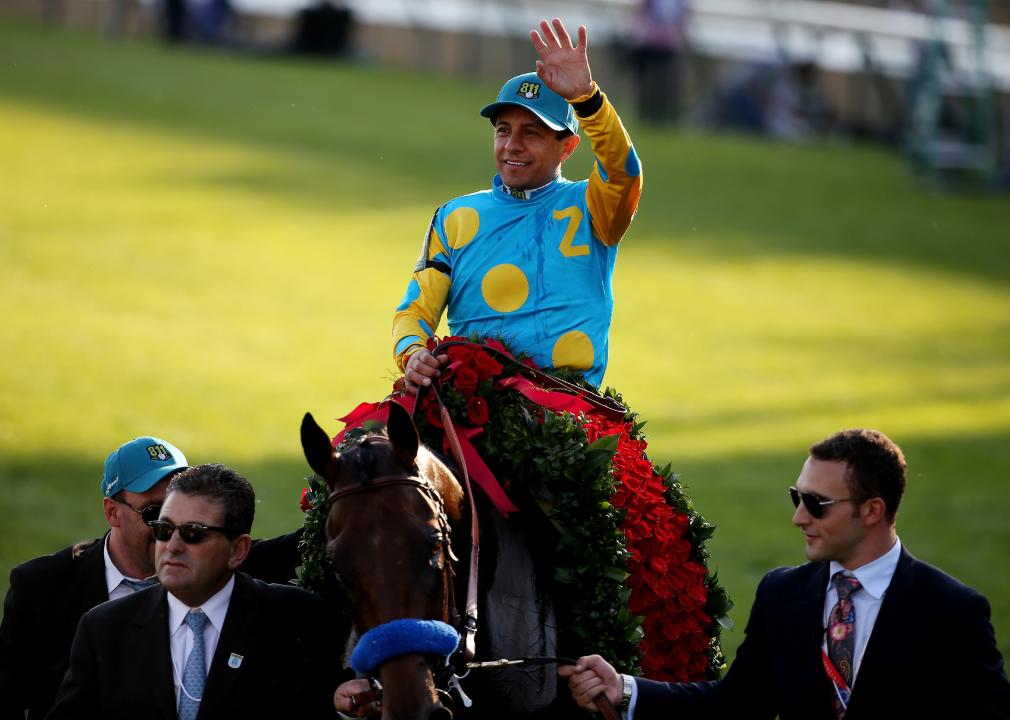 While growing up on a dairy farm in Mexico, riding horses and dreaming of becoming a jockey, Victor Espinoza worked as a bus driver to earn money for his training. In 1992, when he was 20, he had his first win at Mexico City’s Hipódromo de las Américas.

Ready to take on U.S. racetracks, Espinoza moved to Northern California to begin a rider apprenticeship at Bay Meadows Racetrack and Golden Gate Fields. By 2000, Espinosa was ready for the spotlight, and at 55-1 odds, he won the Breeders’ Cup Distaff and a total of $13.2 million in purses. His highlights since then include three Kentucky Derbys, three Preakness Stakes, and one Belmont Stakes. It was while riding American Pharoah in 2015 that they won the Triple Crown, breaking a 37-year drought for the title. He was inducted into The National Museum of Racing and Hall of Fame in 2017.

Just a year later, while riding Bobby Abu Dhabi during training at California’s Del Mar racetrack, the horse suffered a heart attack and died, and Espinoza broke his neck and suffered paralysis. After recovery, he competed again in 2019 at California’s Santa Anita Park racetrack. As of 2021, Espinoza has garnered 22,673 mounts and 3,462 wins, including seven Triple Crown events. His earnings so far: $207 million and counting. 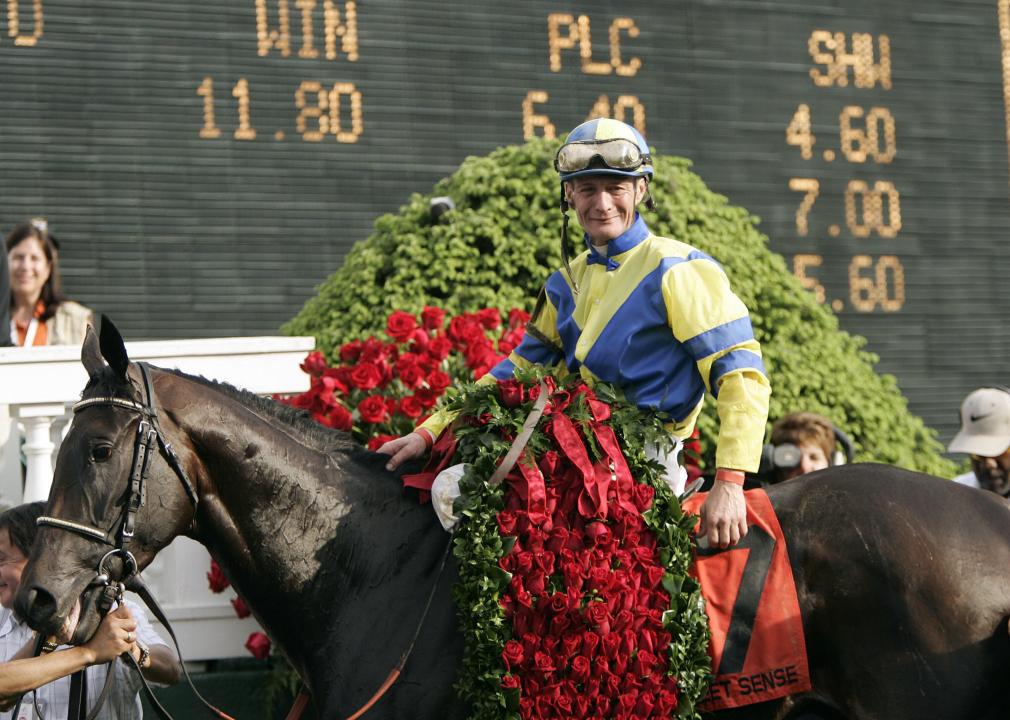 Four years, three wins. Calvin Borel made history in 2010 when he crossed the Kentucky Derby finish line on Super Saver. The win made him the first jockey to win three Derby races in a four-year stretch. The wins preceding 2010 with Super Saver were 2007 with Street Sense, and—at 50-1 odds—in 2009 with Mine That Bird. A comprehensive look at Borel’s career reveals 36,460 mounts and 5,263 wins. Among these wins were the 2006 Breeders’ Cup Juvenile with Street Sense, and the 2009 Preakness Stakes with Rachel Alexandra.

How did Borel achieve such victories? As a child, he started running bush tracks in Louisiana, turning pro in 1983 at 17. In 2013, Borel was inducted into the National Museum of Racing and Hall of Fame, which lists his career earnings as $133,018,904. He had announced his retirement in 2016, but returned to racing within six months. 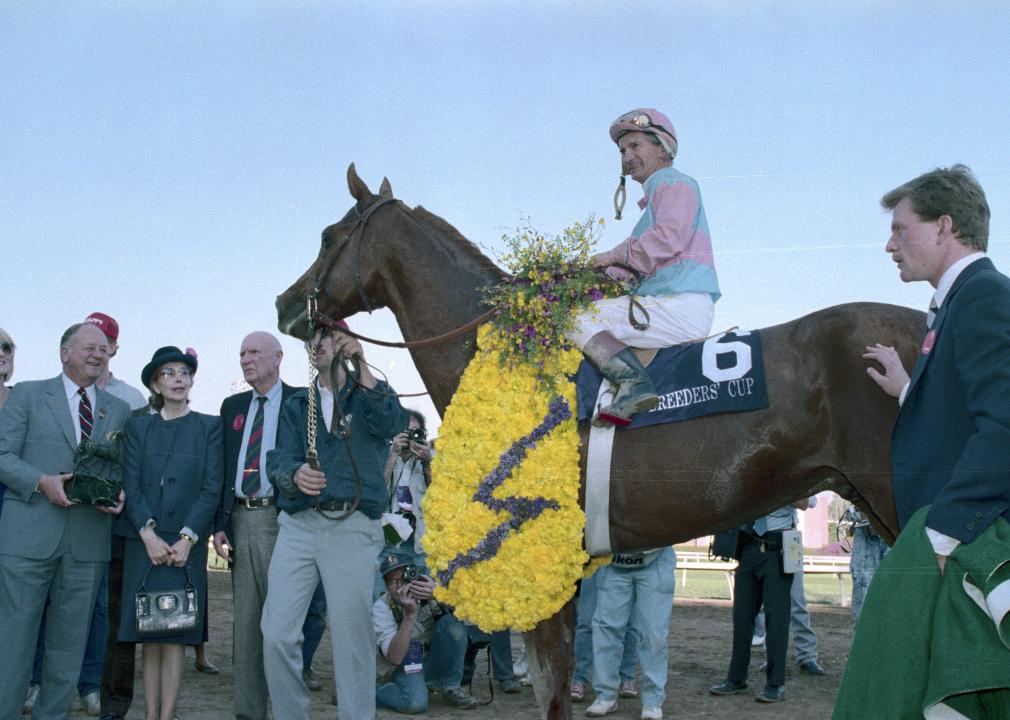 Known for his smooth racing style, William “Shoe” Shoemaker was born in Texas in 1931. After his parents divorced, he moved with his father to Northern California, where he cleaned stables at a thoroughbred ranch. By the time he was 17, Shoe was racing thoroughbreds professionally. He had his first win that year, which unfolded into 218 additional wins before the year’s end.

Upon retiring in 1990, he’d claimed $123,375,524 in winnings. A car accident in April 1991 left Shoemaker paralyzed from the neck down. Though wheelchair-bound, he returned to California’s Santa Anita Park racetrack as a trainer that September. He penned three mystery novels between 1994 and 1996—“Stalking Horse,” “Fire Horse,” and “Dark Horse.” He died of natural causes in 2003. 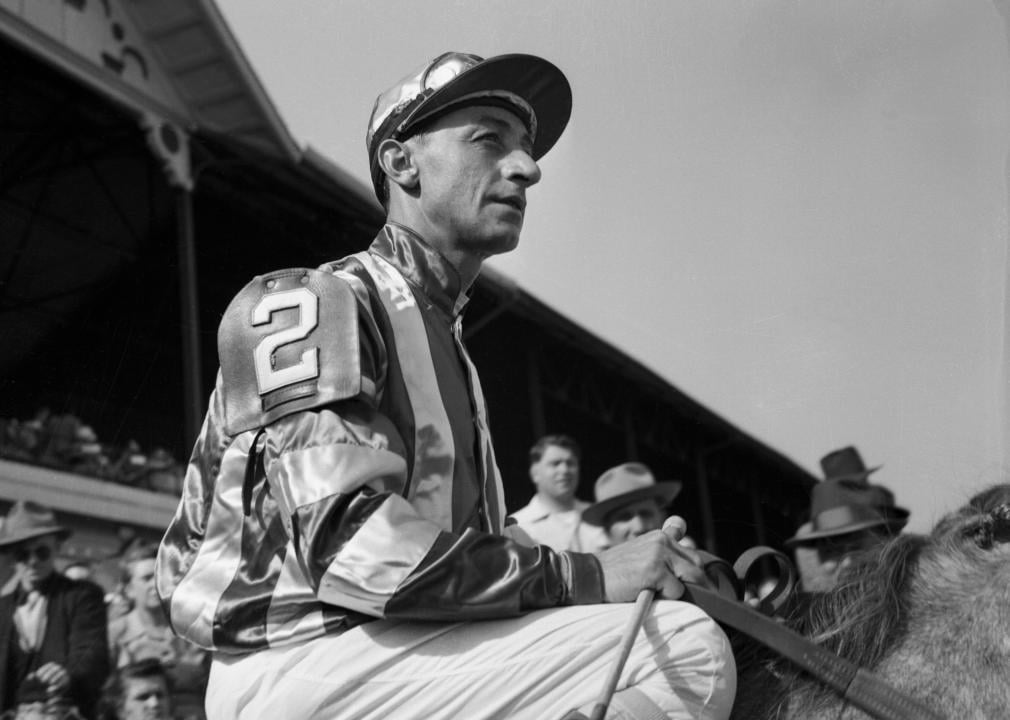 G. Edward “Eddie” Arcaro has been referred to as a “demon in the irons” due to his fierce competitive nature. Said competition started young, with the Ohioan claiming his first win at Mexico’s Agua Caliente Racetrack at 16. Six years later, he won his first Kentucky Derby, a feat he’d follow up four times throughout his career. In 1941 and 1948, he swept the Triple Crown series. He also had four additional Preakness Stakes and Belmont Stakes wins. Over the course of his career, Arcaro had 24,092 mounts and 4,779 wins.

Arcaro was inducted into the National Museum of Racing and Hall of Fame in 1958. Retirement from racing followed in 1962, though he was integral in the founding of the Jockeys’ Guild. Arcaro would go on to become a television commentator and a restaurateur, opening an Italian venue on Melrose Avenue in Los Angeles. Arcaro died in 1997 at 81. 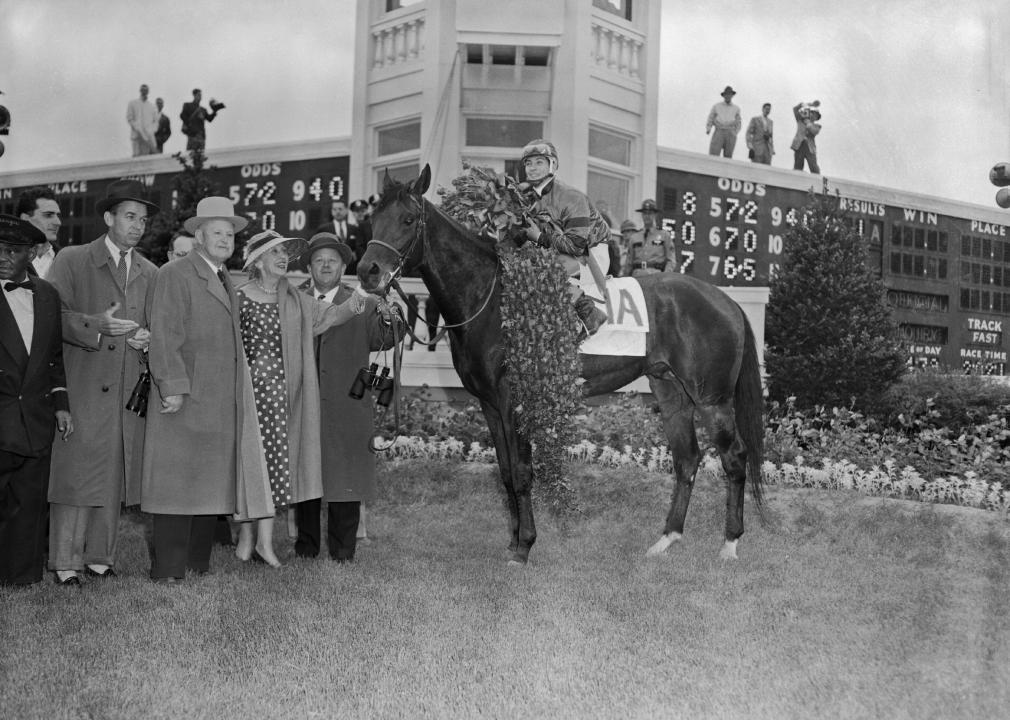 Pennsylvania native William Hartack won his first race in 1952 at West Virginia’s Waterford Park at the age of 19. He would follow that up with a career that saw wins at five Kentucky Derbys, three Preakness Stakes, and one Belmont Stakes. When inducted into the National Museum of Racing and Hall of Fame in 1959, Hartack was the youngest jockey to achieve the honor. Throughout his career, he accomplished 21,535 mounts, 4,272 wins, and purse earnings of more than $26 million.

In 1956 and 1964, Hartack was featured on Sports Illustrated covers and in 1967, he wrote a three-part series for the magazine about his career. He also graced the cover of Time in 1958. Hartack died in 2007 at 74. After his death, The Bill Hartack Charitable Foundation was established to support thoroughbred racing industry charities.