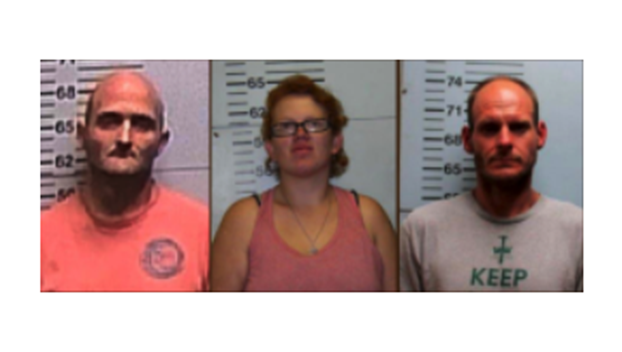 Three Warren County residents were arrested on May 1 in connection with the theft of AT&T telephone wire.

Christopher Hayes, 34, Amy Hearn, 28, and Joseph Smith, 34, were arrested for the theft of telephone wire near Old Highway 27.

Sheriff Martin Pace said the arrests are the second set in the last month, and that thieves are stealing cables for the copper content.

“As has been reported, wire theft, predominately of AT&T telephone wire, is a problem throughout the country,” Pace said. “People are stealing the wire, melting the copper and selling it. We have been working on several cases and have launched an effort to curb the theft of telephone cables in the area.”

The sheriff’s office has been working with AT&T over the last few weeks to track down people who are stealing cables. Pace said his office is also working with the District Attorney’s office to determine the most effective charges in these cases.

For theft, the threshold between a misdemeanor and felony charge is $1,000. Charging thieves solely for the theft of wires, he said, typically means an abundance of smaller misdemeanor charges. So, local authorities are taking a new route in fighting cable theft.

“Under state statute, malicious mischief is the vandalism law. That threshold is also $1,000, but it’s based on the actual damage done to the victim — in this case, the phone company,” Pace said. “In this case, the estimate from AT&T is $4,000 worth of damage.

“So, the suspects are all three charged with malicious mischief and now they are facing time in prison.”

Hayes, Hearn and Smith had their initial appearance in justice court on Monday, where Judge Jeff Crevitt set bond at $10,000 each.

In addition to hoping prison time is enough of a threat to deter others from stealing telephone cables, Pace said the crime is also life-threatening to commit.

“It’s not only very expensive and damaging to the telephone company; it’s also dangerous for the thieves,” he said. “When they cut the cables, it also cuts off many landline phones. It can be very dangerous. It’s not a simple theft. That’s why we’ve been working with the DA’s Office to determine the most effective charges to combat this.”