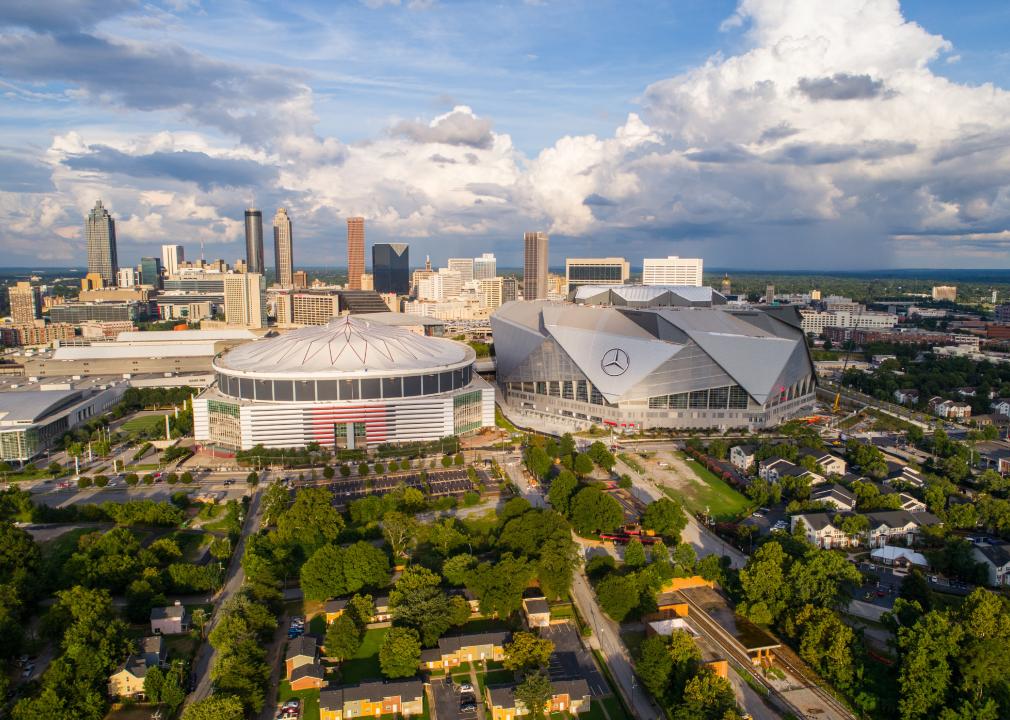 Haven’t you always dreamed of catching a Red Sox game at Fenway or a Cubs game at Wrigley? How about experiencing the Kentucky Derby or the Indy 500? Or watching the Heat in Miami before hitting the beach? Now that sporting events have bounced back with fans filling arenas and stadiums nationwide, it’s time to start thinking again about catching a game, match, or race. In many cases, traveling to a game in another city or state may not even require a hotel. All you need to do is board a plane and beeline for the park.

Bounce, the luggage storage company, compiled data on the U.S. airports closest to major sports venues. Estimated driving and transit times are from Here., a map data platform. America tops all nations in having the most sports stadiums—more than 900—and has more than 5,200 publicly accessible airports. But only a fraction of those airports are near major sports venues. 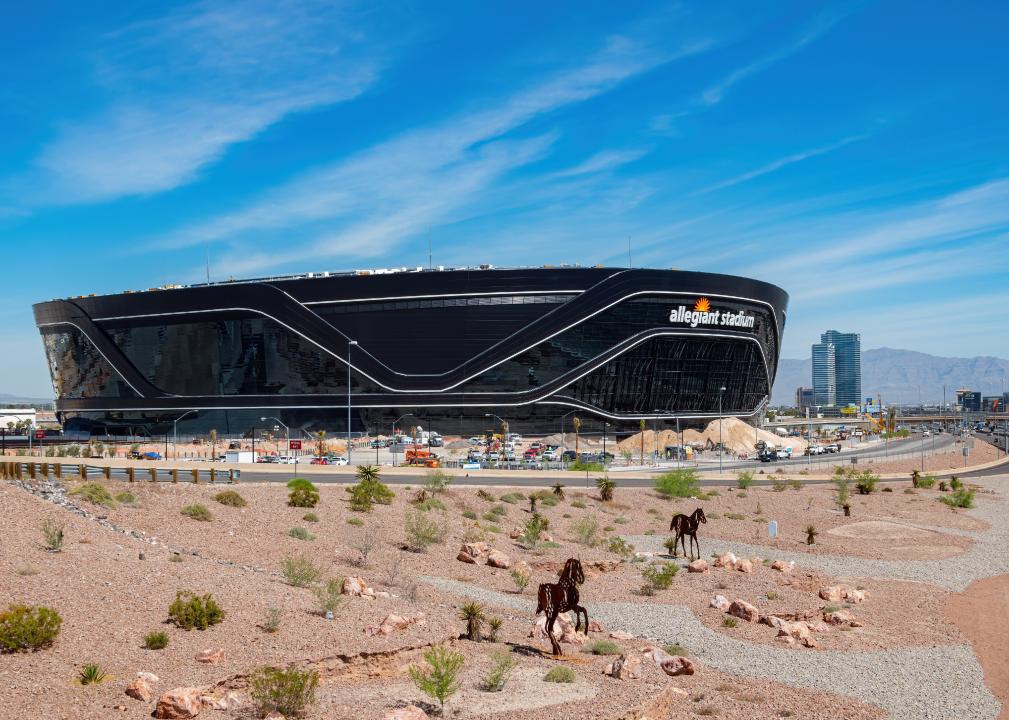 America’s newest stadium will enjoy a big, belated housewarming party when Super Bowl LVIII is played in Vegas, marking the first time the NFL’s top game will be played in Sin City. The Feb. 11, 2024, version of the Big Game at Allegiant Stadium will introduce America to a stadium just 10 minutes from the airport, and just a 10-minute walk to the Strip for fans who might want to put some money on their team first. NFL fans who don’t want to wait that long to see the stadium can fly to any Oakland Raiders home game this fall—and make a Vegas weekend out of it. 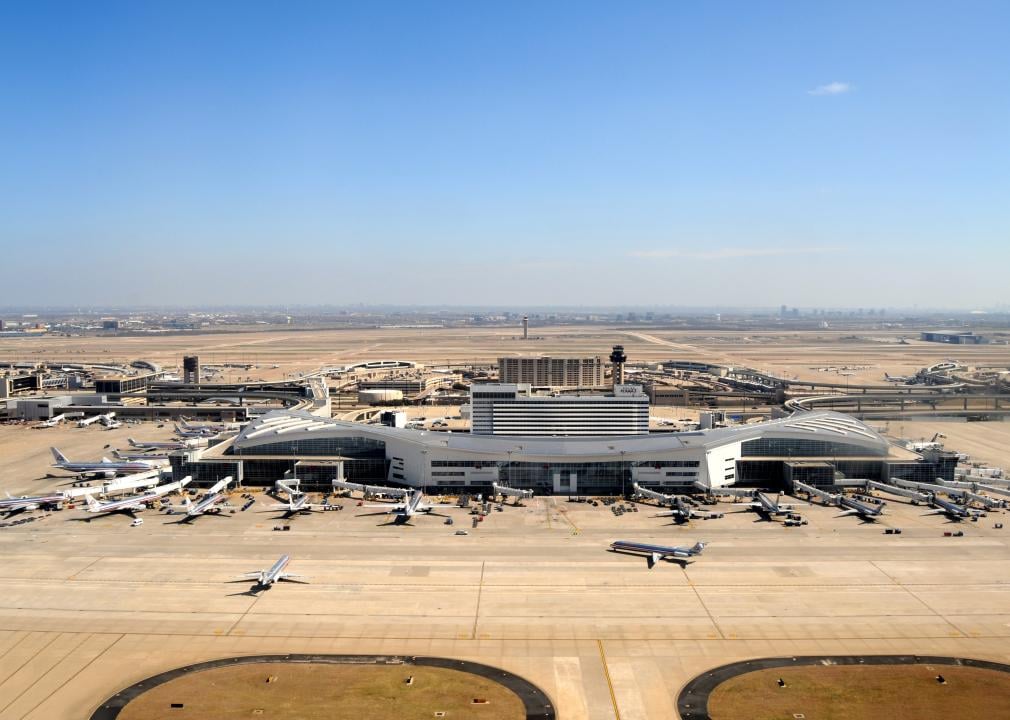 What’s more American than “America’s Team,” also known as the Dallas Cowboys? NFL fans flock to AT&T Stadium for the same reason that pilgrims flock to holy sites: It’s where they can mingle with fellow believers. Cowboys fans believe in mom, apple pie, NFL football, and the fanciful notion that maybe someday all that talent owner Jerry Jones pays for might lead to the team’s first championship season since 1995. 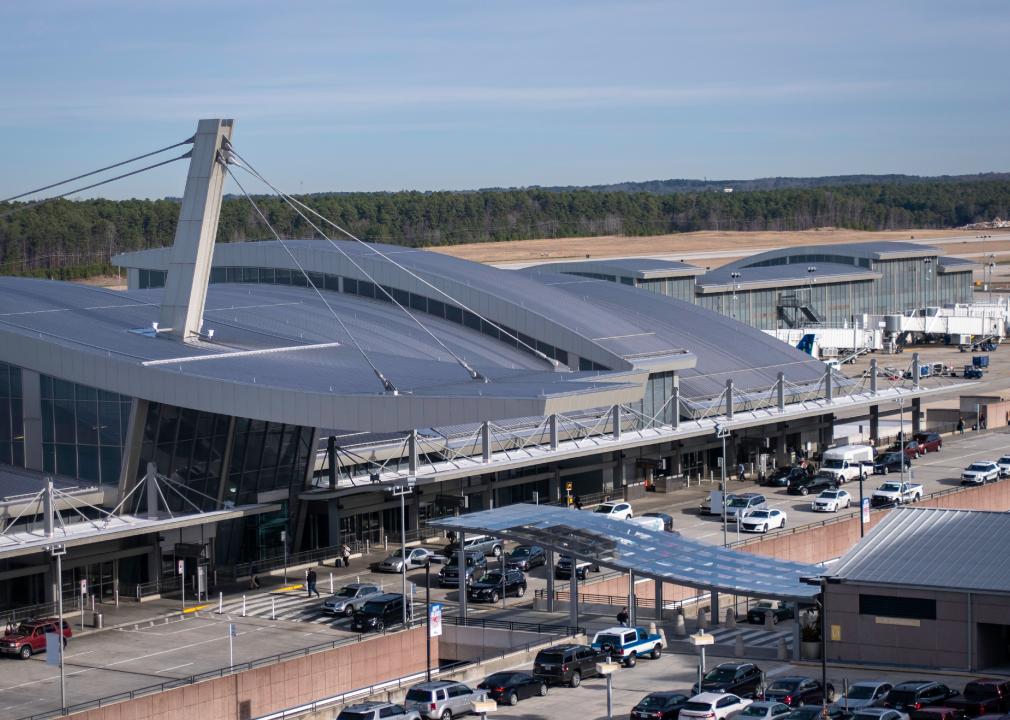 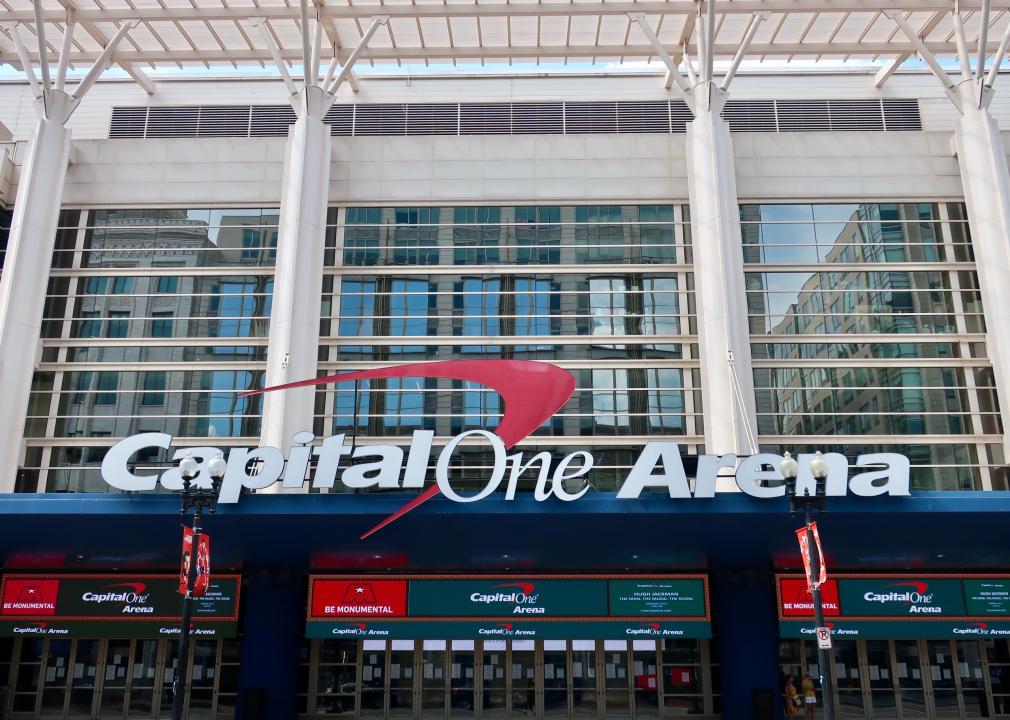 Consider plopping your plastic down for a game at Capital One Arena the next time you’re in the nation’s capital. As long as you visit between October and April, you can choose your sport as the NBA’s Wizards and the NHL’s Capitals both play throughout those months. And for those looking to amplify their sports excursion with a bit of American history, the Lincoln Memorial, the National Portrait Gallery, and the U.S. Capitol building are all within walking distance. 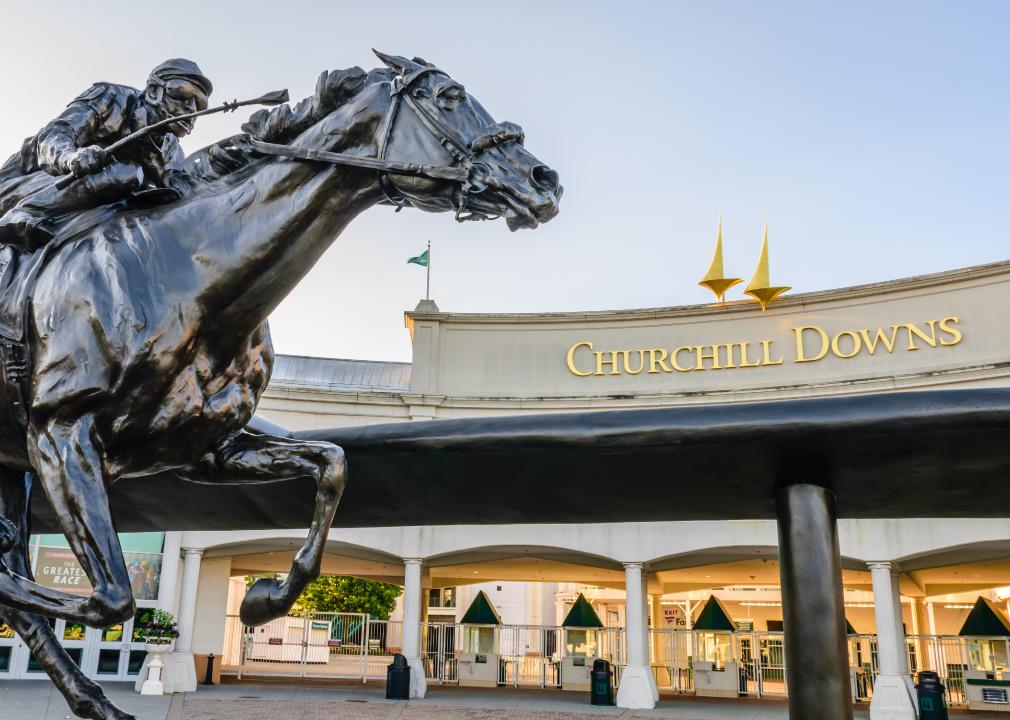 Baseball fans have the World Series and tennis and golf fans have the U.S. Open tournaments—all dating back to the 1800s. But none of these hallowed events are older than the Kentucky Derby, America’s oldest continuously held sporting event. Even if you don’t come for the race (which falls on May 7 this year), consider a tour of Churchill Downs and the Kentucky Derby Museum. 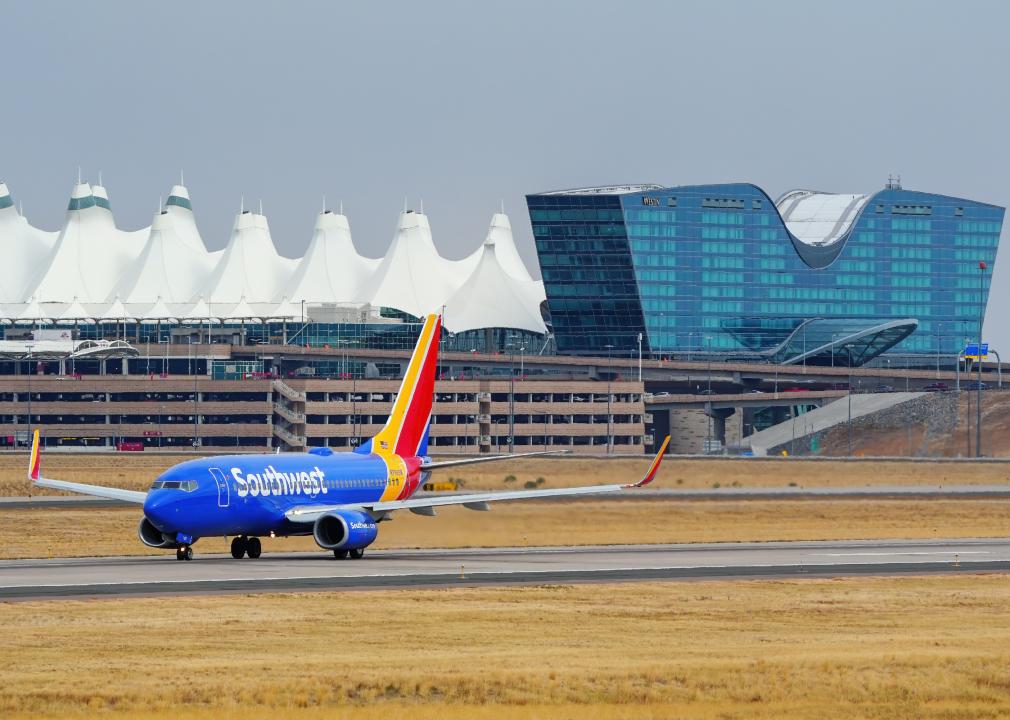 MLB power hitters think about Coors Field the way NASA engineers think about Cape Canaveral. Both launch sites (for home runs and rockets, respectively) offer thrills. And after a Rockies game, you can get even higher than the mile-high stadium on mountain trails. 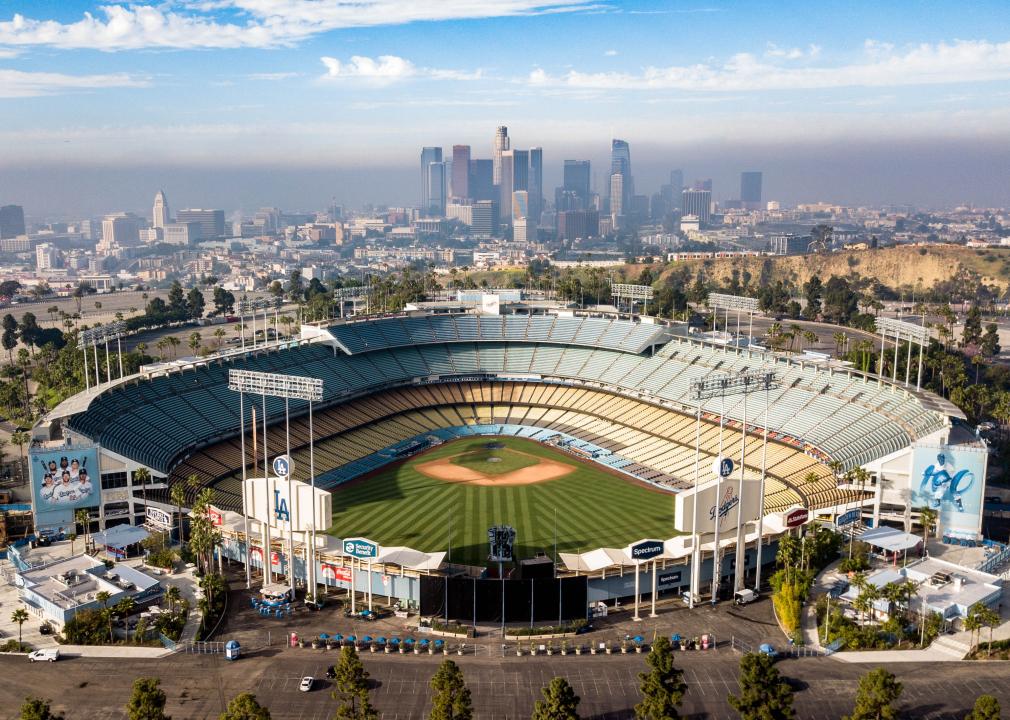 The Dodgers are the eighth-oldest MLB team (founded in 1883 in Brooklyn) and play in the third-oldest MLB stadium (Dodger Stadium, which opened in 1962), but a visit to L.A. never gets old. That’s especially true if you make it to a Dodger game as the team is favored to win the World Series this year, just as they have seven times before. And there’s no shortage of things you can do before and after the game, from hitting the beaches to visiting Disneyland or Universal Studios Hollywood. 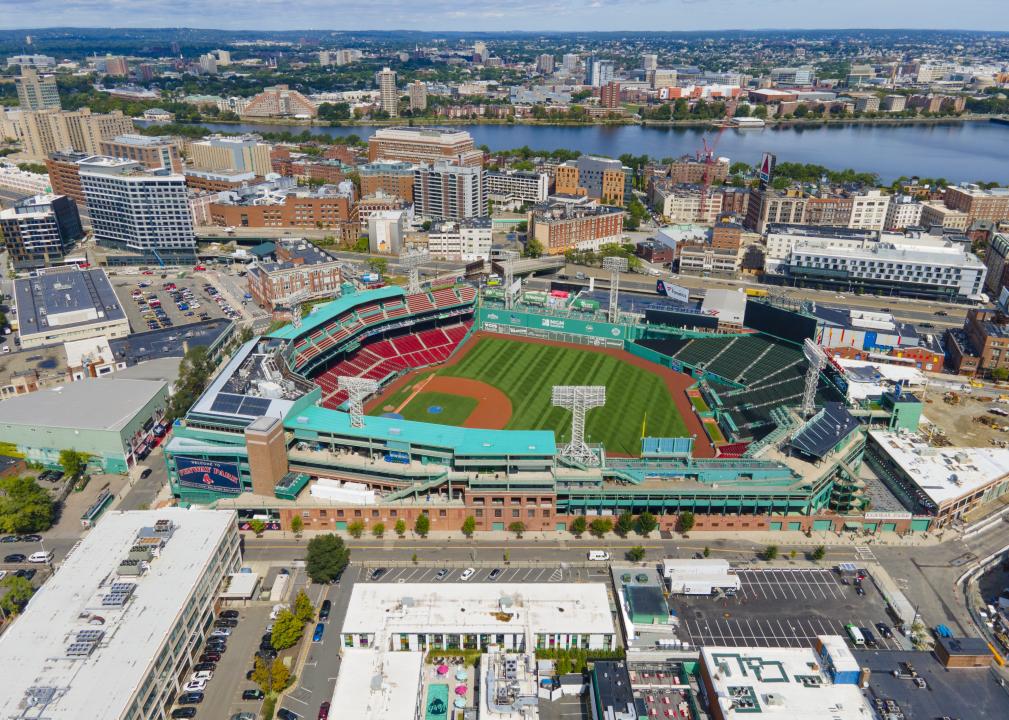 Boston is dripping with U.S. history, and Fenway is right up there with the Freedom Trail and the Old North Church in the minds of baseball fans. A Red Sox game, especially if they’re playing the archrival Yankees, is almost a spiritual experience. The fans are as excitable as the 1912 stadium is revered, and the Green Monster (a 37-foot-high, home run-killing left-field wall) is everything Red Sox fans make it out to be. 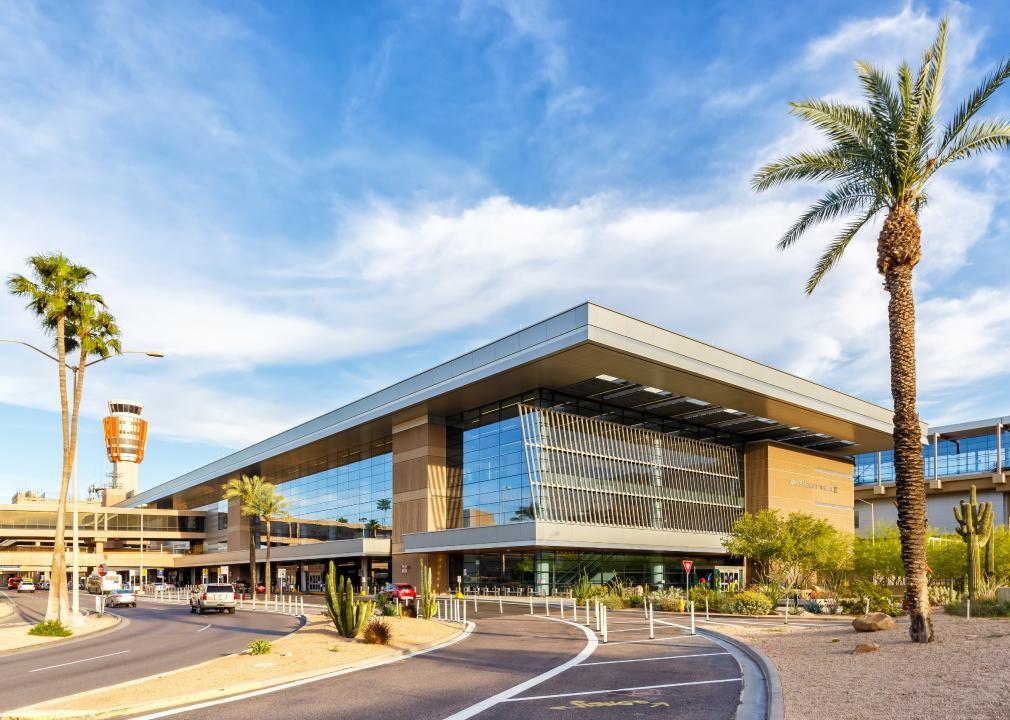 The Suns were the NBA’s winningest team in the 2021–2022 season, so all eyes were on Phoenix heading into the playoffs. Footprint Center is also a winner for hosting the WNBA’s reigning-champion Mercury and arena football’s Rattlers (the second best in the Indoor Football League in 2021) when the Suns aren’t playing. Greater Phoenix is also a golfer’s paradise, so pack your clubs if you have an extra day or two. 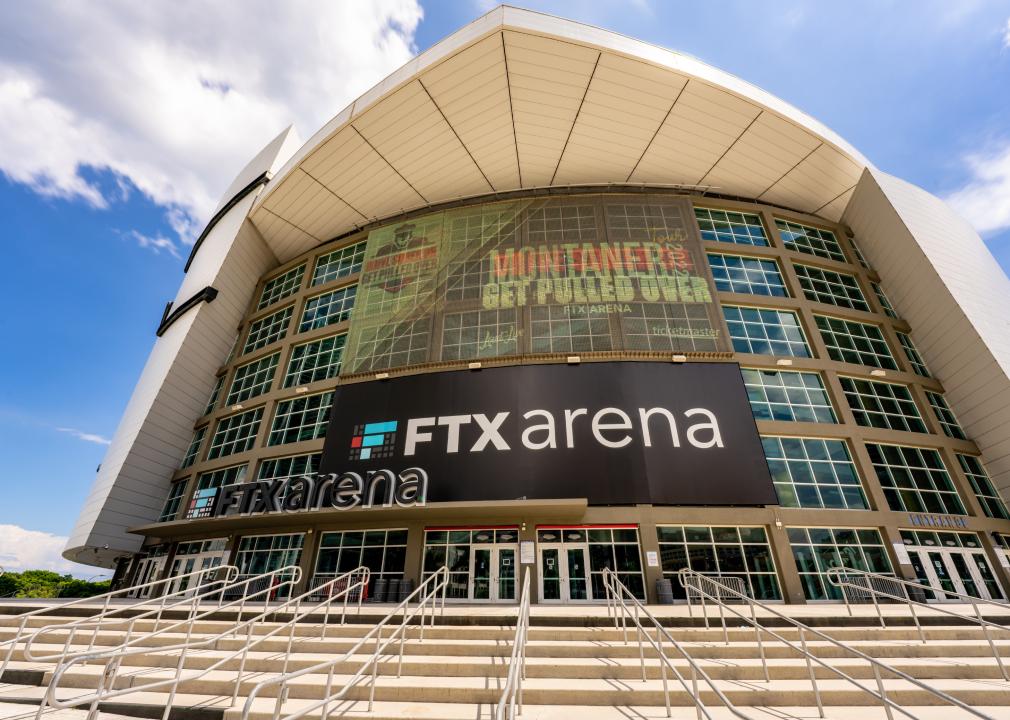 Since the days of Shaq and LeBron, the Heat have been a particularly fun team to watch. On your trip to Miami, hit a game at FTX, then catch a wave at the beach. Or if you’re looking for something not so sandy, the arena is sandwiched between and easily accessible to both Bayfront Park and the Frost Museum of Science. 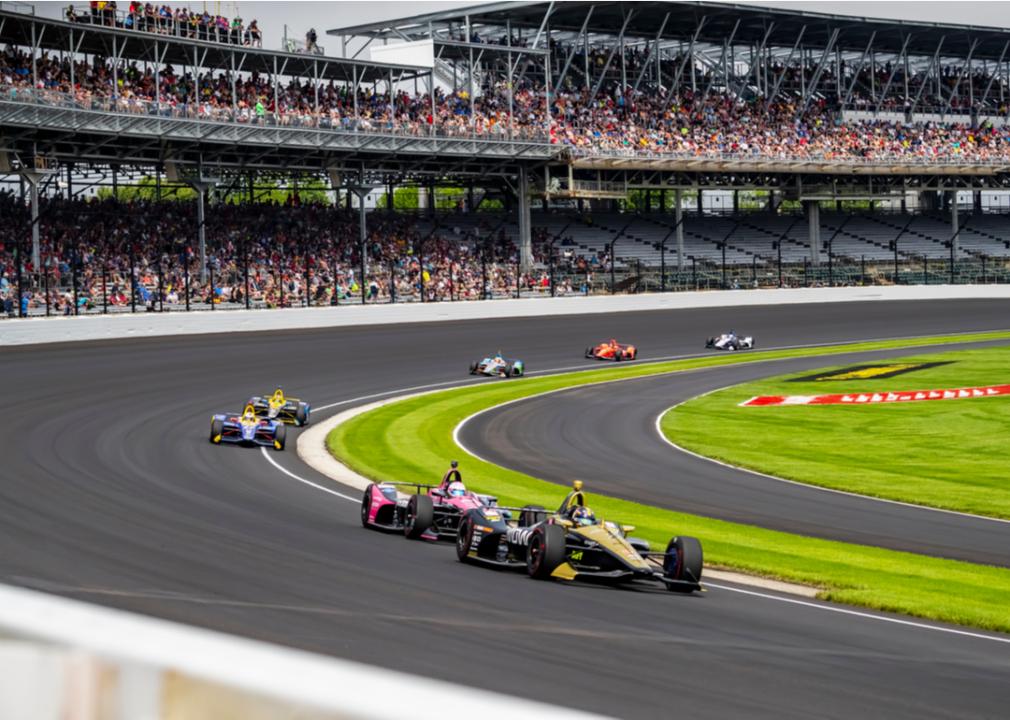 If you like crowds, there is no bigger single-venue sporting event than the Indy 500 with its estimated 300,000 annual spectators at Indianapolis’ iconic Motor Speedway. And if you like auto racing history, there is no older race; drivers have been starting their engines there since 1911. The Memorial Day classic should be on the bucket list of anyone who thinks the roar of internal combustion engines sounds like the purring of cats. 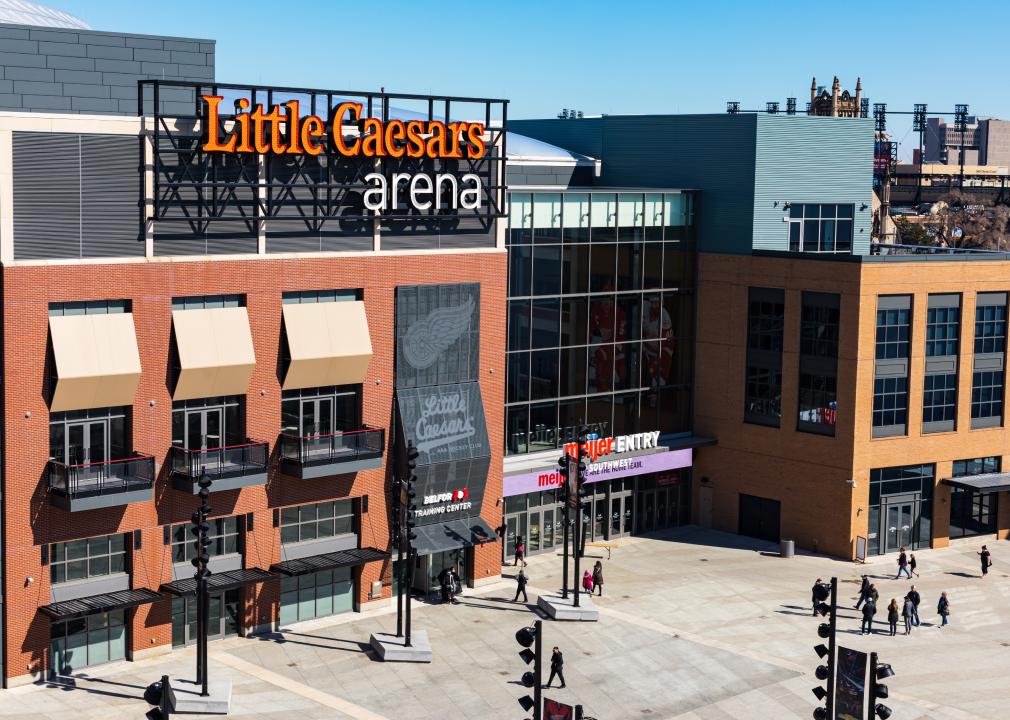 Motown music and the automotive industry are not Detroit’s only claims to fame. The city also hosts two of America’s historically solid teams: the Pistons and Red Wings. Both play at the Little Caesars Arena. 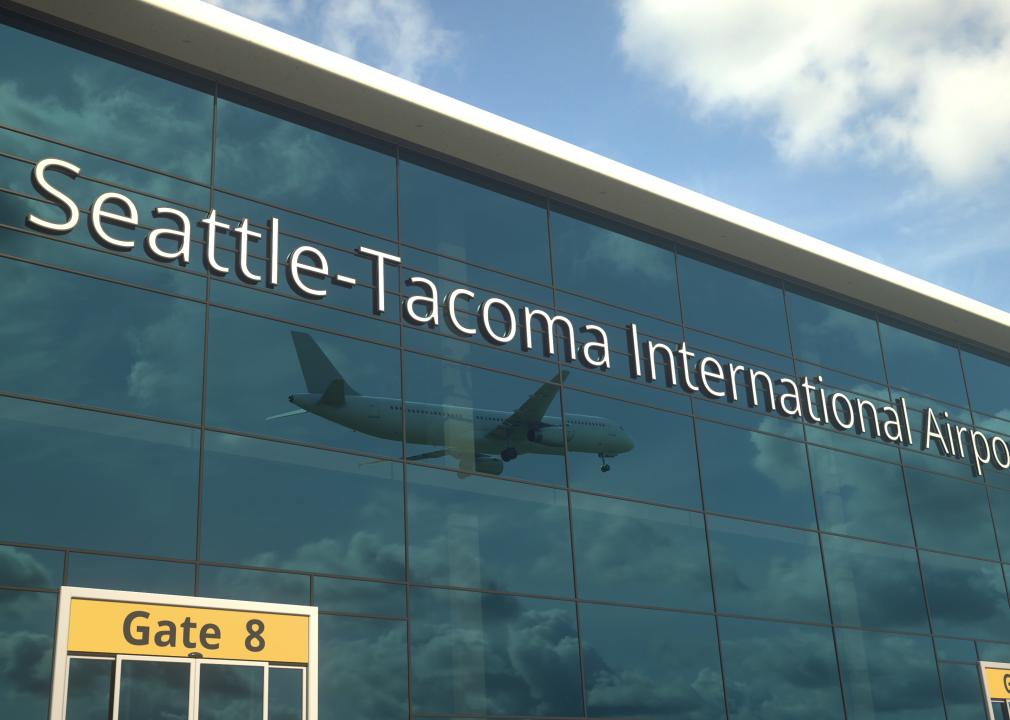 Seattle is best known for Boeing, Microsoft, Starbucks … and the Seahawks. Watching a Seahawks game is like watching a rock concert as the noise-trapping architecture makes Lumen Field one of America’s two loudest NFL stadiums (along with Arrowhead in Kansas City). Between April and October, you can instead watch the Sounders, the best-drawing team in Major League Soccer with crowds that have approached 70,000. 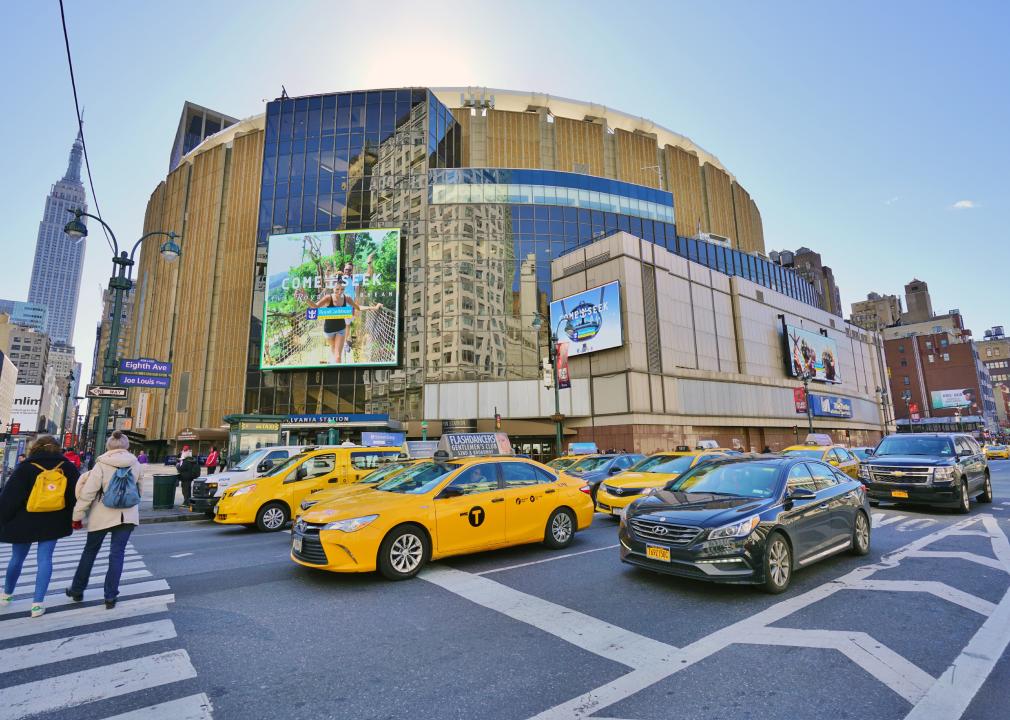 So beloved that fans simply call it “the Garden”—no corporate sponsors here!—Madison Square Garden hosts both the Knicks and the Rangers. Sometimes they even play on back-to-back nights because both compete from fall to spring. The Midtown Manhattan location makes it perfectly situated for anything you want to do in the Big Apple pre- or post-game. 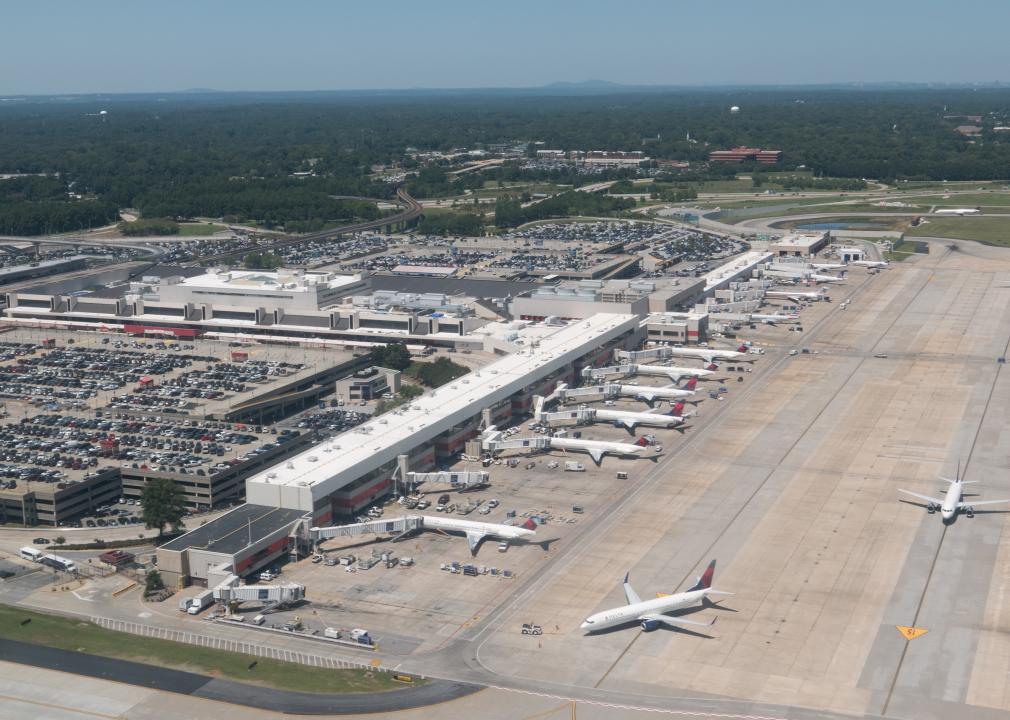 Atlanta’s Hartsfield-Jackson is the world’s busiest airport, largely because it’s Delta’s main hub. The city is also busy with sporting events as the retractable-roof Mercedes-Benz Stadium has already hosted a Super Bowl and a College Football Championship Game in its first five years. During the Falcons’ off-season, you can watch that other version of football by catching a United game. 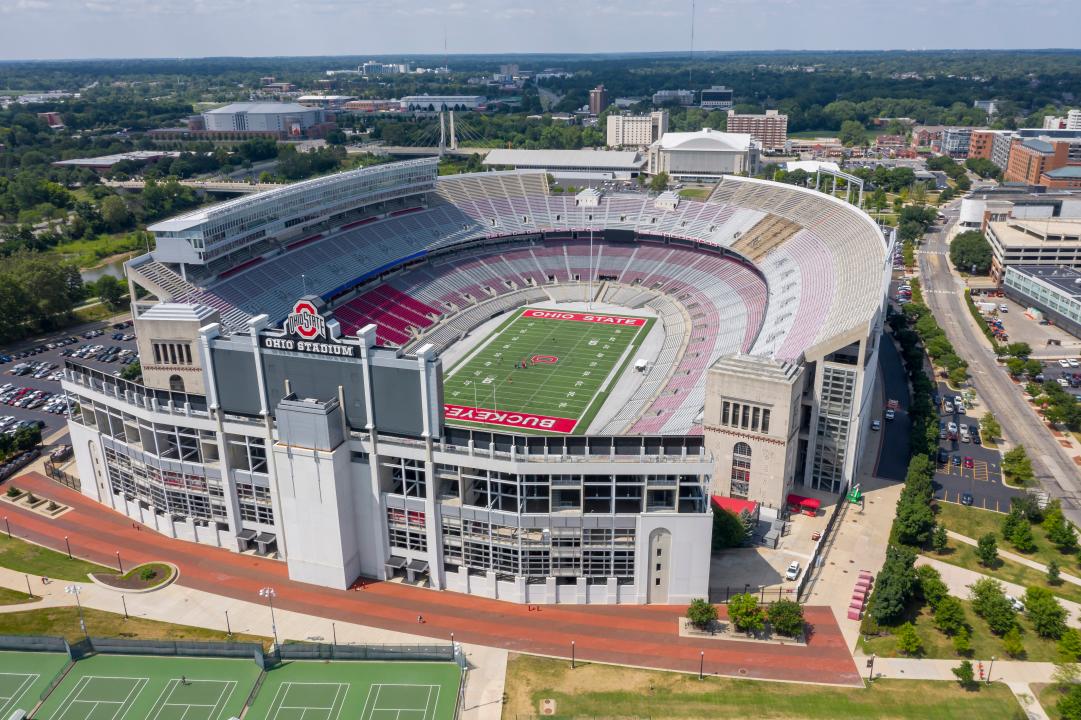 Ohio State Buckeyes football is almost a religion in the Buckeye State; the main difference is that the “church” (Ohio Stadium) holds more than 100,000, so it’s even noisier when a touchdown is scored than a choir singing the “Hallelujah Chorus” on Christmas Day. The pinnacle of every season is the game against archrival Michigan (this year hitting Nov. 26, 2022), when even “cheap” seats sell for hundreds of dollars. 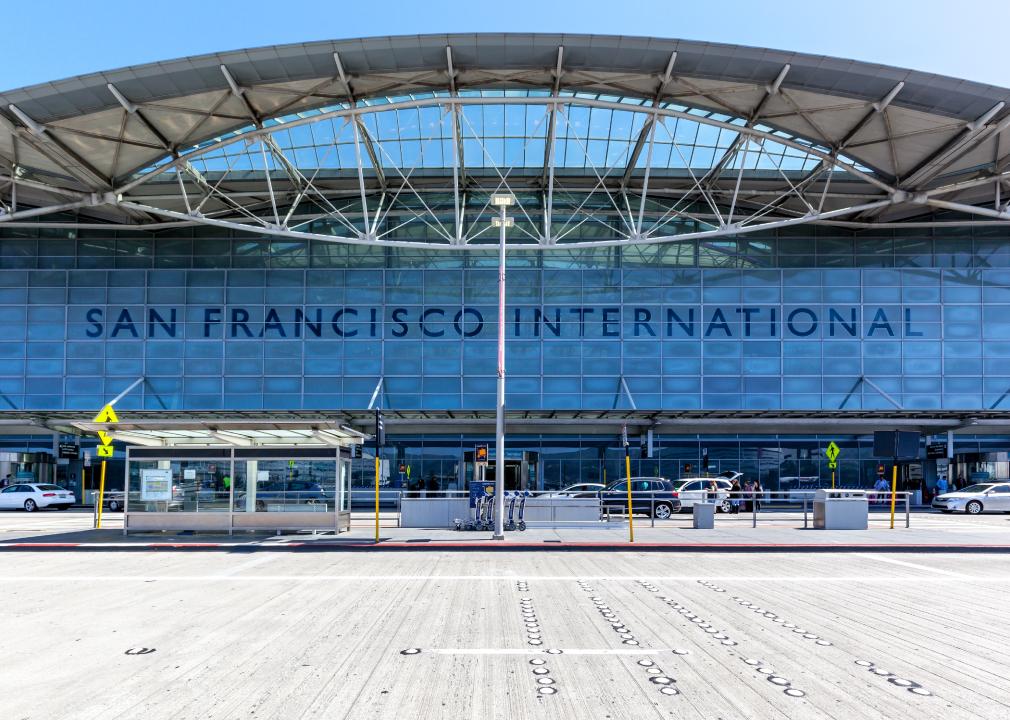 Location, location, location: That’s the main reason Oracle Park is regarded as the “prettiest” stadium in America with its waterfront location and views. “Splash hits” by Giants sluggers land in the bay, retrieved by waiting kayakers, and Steph Curry and the Golden State Warriors play just down the street at Chase Center. 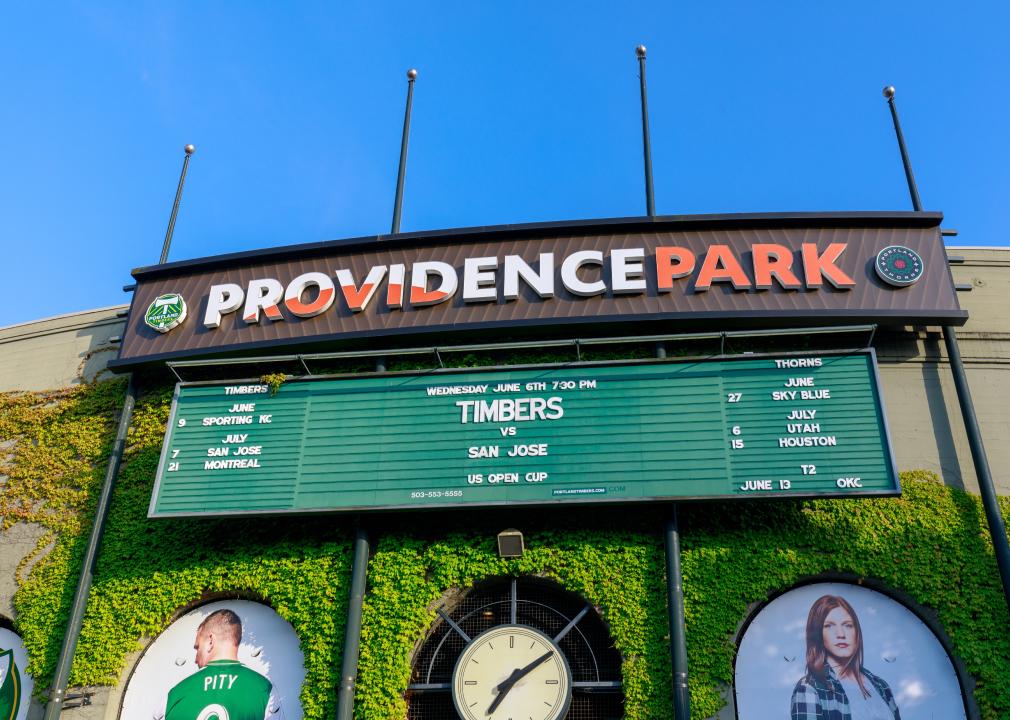 Satirized in the TV show “Portlandia,” Portlanders like to do things a little differently. The city’s only major sports team—the NBA’s Trail Blazers—hasn’t won a conference title since 1992, so many locals gravitate to a sport beloved by Pacific Northwesterners—soccer. The Timbers (men) and Thorns (women) each lure healthy average crowds in excess of 6,000 and 21,000, respectively, to Providence Park, a turnout that would be the envy of some Major League Baseball teams. 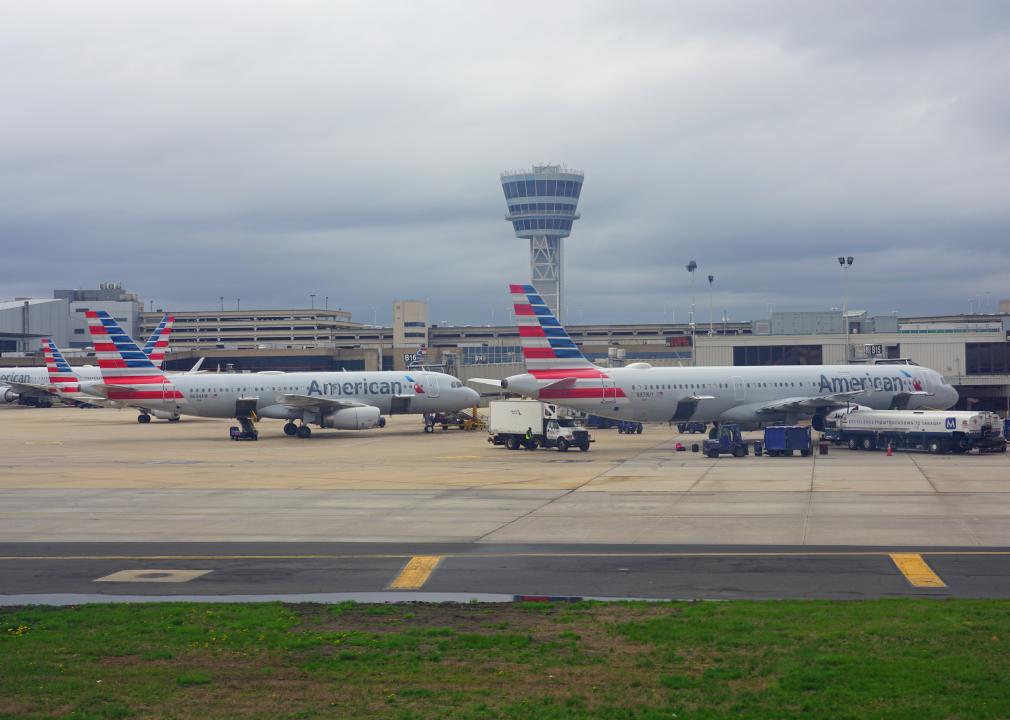 Fans of the 76ers and Flyers don’t get to cash in championship bragging rights too often as their last two titles came in 1975 (Flyers) and 1983 (76ers). But that doesn’t make Philly’s sports fans any less fanatical. If you fly in for the Flyers or come to watch seven-footer Joel Embiid’s hoops magic act for the Sixers, grab a cab at the airport and you’ll be at Wells Fargo Center in less time than it took John Hancock to sign the Declaration of Independence just a few miles away. 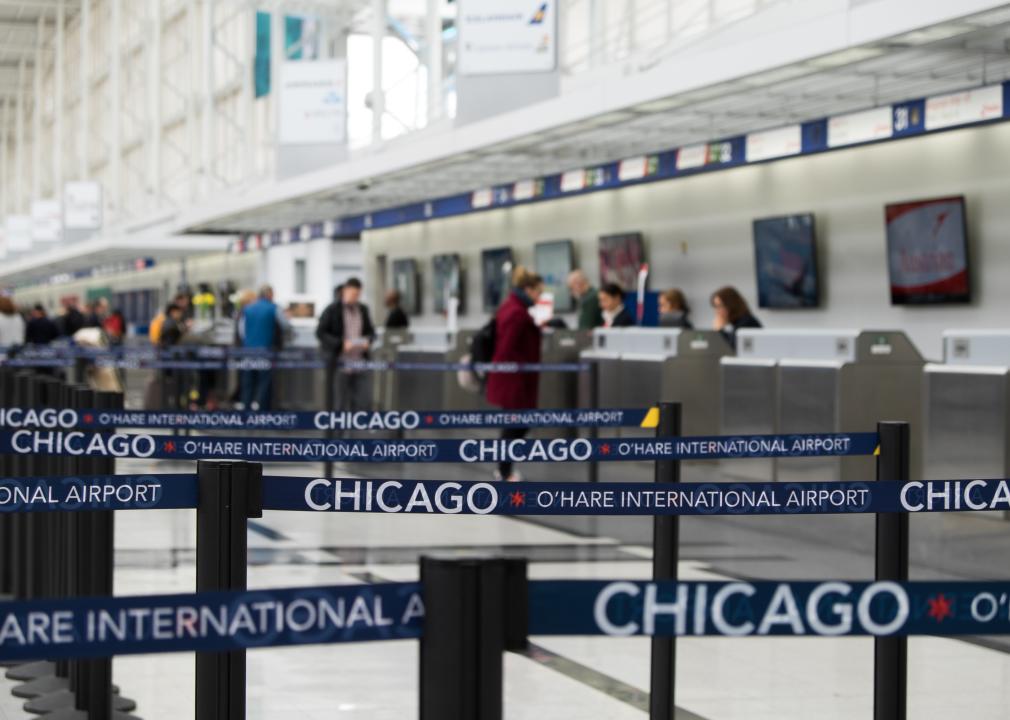 Wrigley Field has been hosting Cubs games since 1916, but they didn’t win a World Series title until 100 years later. The aging stadium may not last another century, so it’s best you go soon, if only to admire quirks like the ivy-covered outfield walls and rooftop seats. You can enjoy Chicago’s nightlife after the game, too, because most Cubs games by city ordinance are played in the afternoon. If you’re a music fan and you time it right, you might even be able to take in a concert—this summer Lady Gaga and Zac Brown Band are among the acts slated to perform at Wrigley.

This story originally appeared on Bounce
and was produced and distributed in partnership with Stacker Studio.