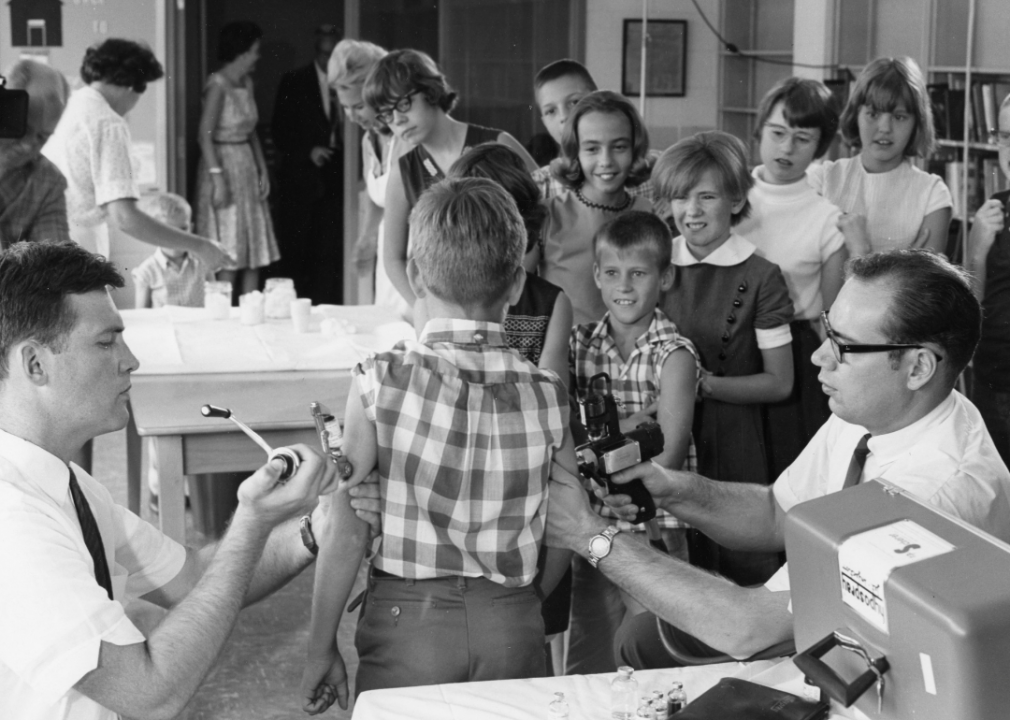 On Jan. 13, 2022, the Occupational Safety and Health Administration issued a COVID-19 vaccine mandate imposing a vaccine-or-test rule for workers in companies exceeding 100 employees to combat the spread of the coronavirus as the nation continues to grapple with the ongoing COVID-19 pandemic. However, in a landmark decision made weeks later by the U.S. Supreme Court on Jan. 25, the order was blocked (in a 6-3 opinion), with the Court ruling that OSHA had surpassed its power.

The ruling came months after President Joe Biden, whose administration backed the OSHA mandate, issued COVID-19 vaccine requirements for government employees, large employers, and health care workers to combat the latest surge in COVID-19 cases in September 2021. Similar vaccine mandates like these are nothing new in the United States—they date back to the Revolutionary War, when smallpox outbreaks hindered the Continental Army as it fought British troops.

Public backlash against vaccine requirements also has a long history in this country, as protests have led states to grant religious and philosophical exemptions from such mandates. The requirement that children be vaccinated before attending public school has sparked debate about whether safeguarding public health trumps a child’s right to an education. Several landmark Supreme Court cases have upheld the idea that public health takes precedence.

The federal government has recognized the importance of vaccines for protecting public health by passing legislation and establishing agencies to oversee their safe manufacture and distribution. Stacker used online resources from the National Institutes of Health, the National Conference of State Legislatures, the Centers for Disease Control and Prevention, and Cornell Law School to put together a timeline of important events in the history of vaccines and vaccine mandates in the U.S. 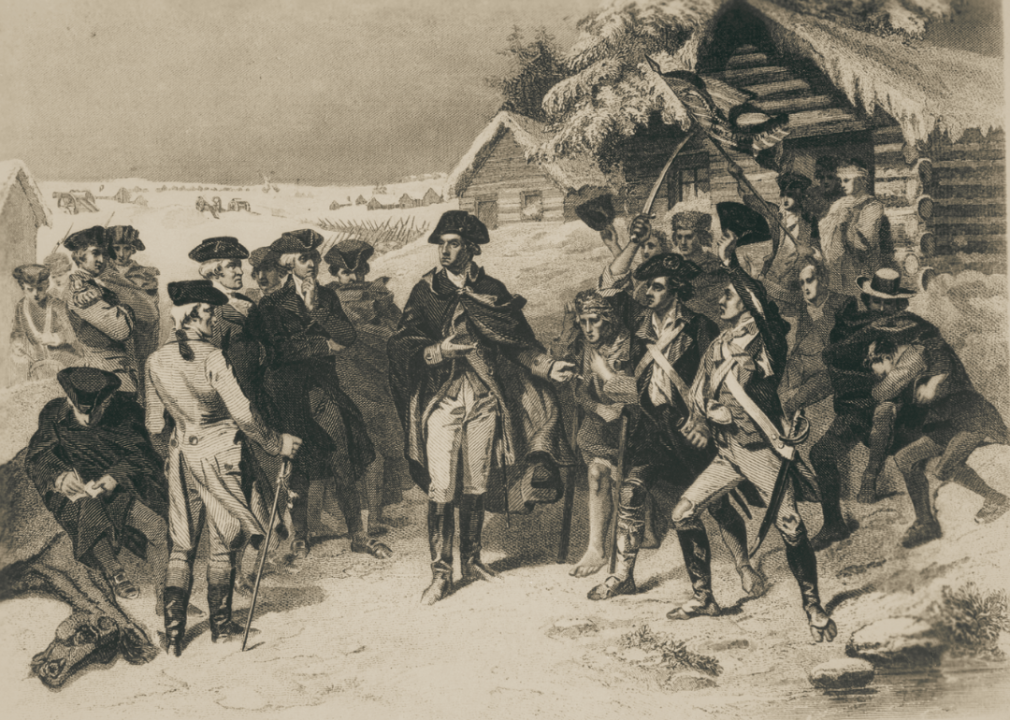 1777: George Washington mandates smallpox vaccines for all his soldiers

American soldiers during the Revolutionary War were susceptible to smallpox, but the majority of British troops were immune due to childhood exposure or vaccination. The Continental Army’s major military campaigns failed, as smallpox outbreaks swept through its camps. So the Continental Congress authorized Gen. Washington to require his troops to get vaccinated. Subsequent victories of American forces were attributed to the smallpox vaccine mandate. 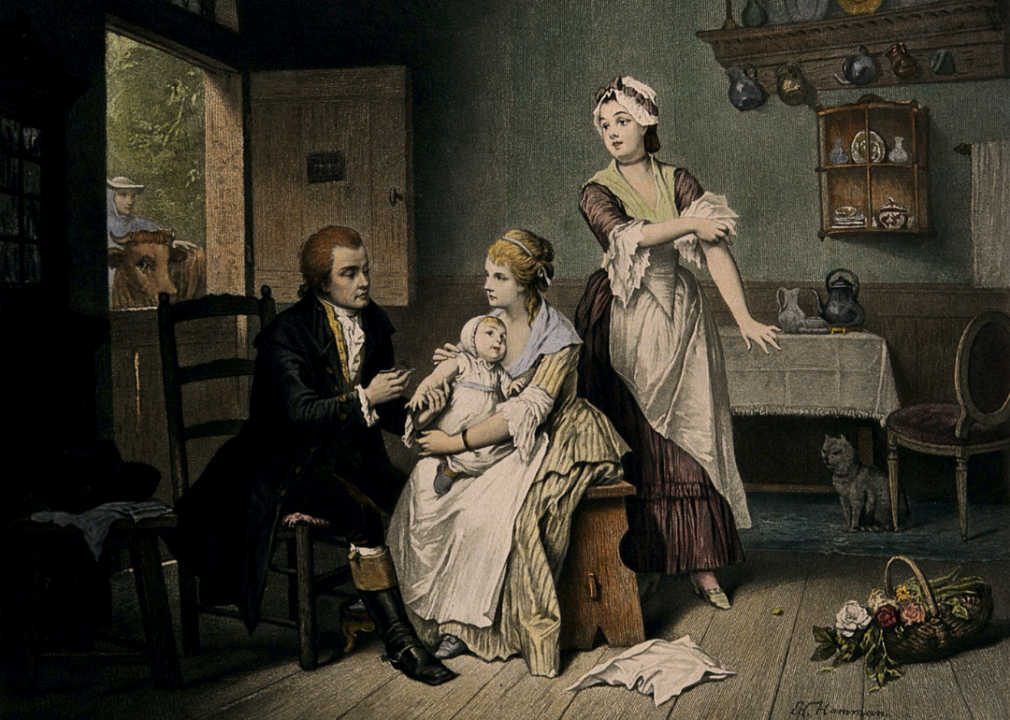 This law authorized local boards of health to require smallpox vaccinations for those over 21. Other states subsequently passed similar legislation. However, opposition to mandatory vaccination increased as states began to enforce these laws. Vaccine mandates were repealed in California, Illinois, Indiana, Minnesota, Utah, West Virginia, and Wisconsin. In 1905, the U.S. Supreme Court upheld the authority of states to enforce vaccine requirements in the landmark case Jacobson v. Massachusetts. 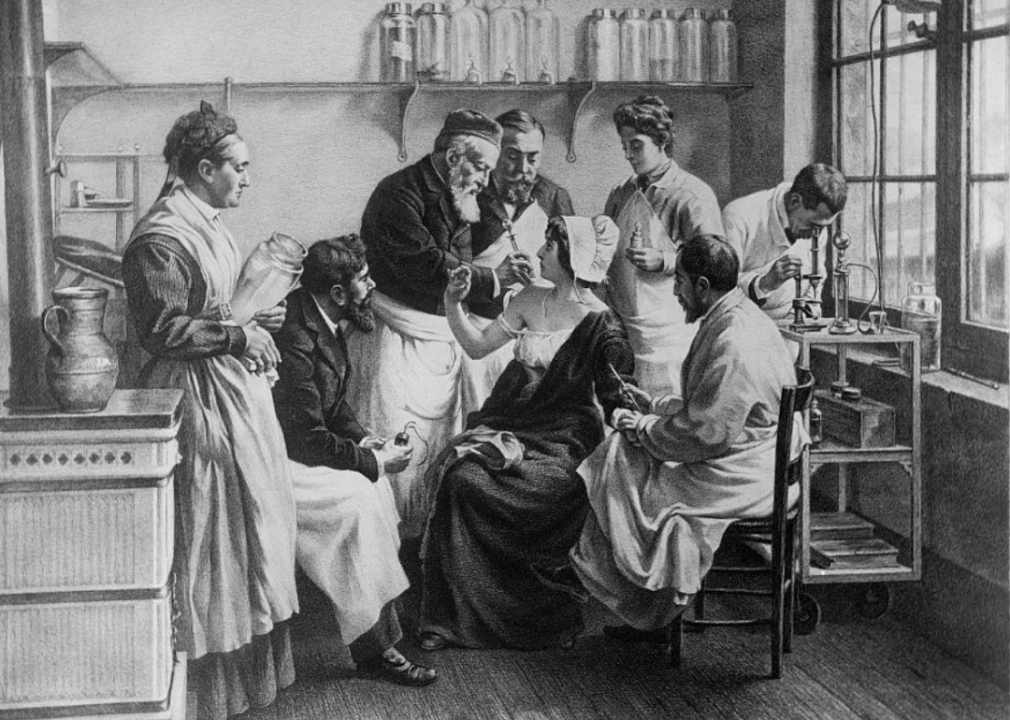 1813: Congress establishes the US Vaccine Agency

The agency was established by the Act to Encourage Vaccination, which was signed into law by then-President James Madison. Baltimore physician James Smith initially oversaw the agency as the national vaccine agent. The United States Postal Service was required to carry vaccine-related packages under 0.5 ounces for free to aid the agency’s efforts toward mass vaccination. 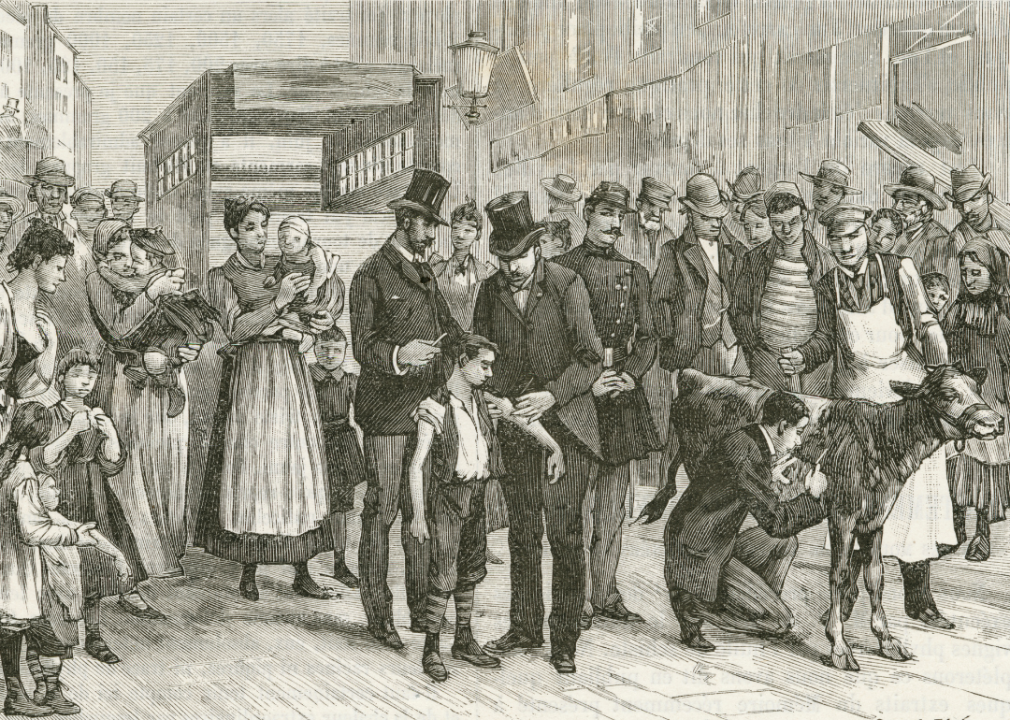 Today, all 50 states have vaccine mandates for children attending school. Religious exemptions are allowed in 44 states as well as Washington D.C., and 15 states allow for exemptions because of the parents’ philosophical beliefs. However, all states allow for medical exemptions. 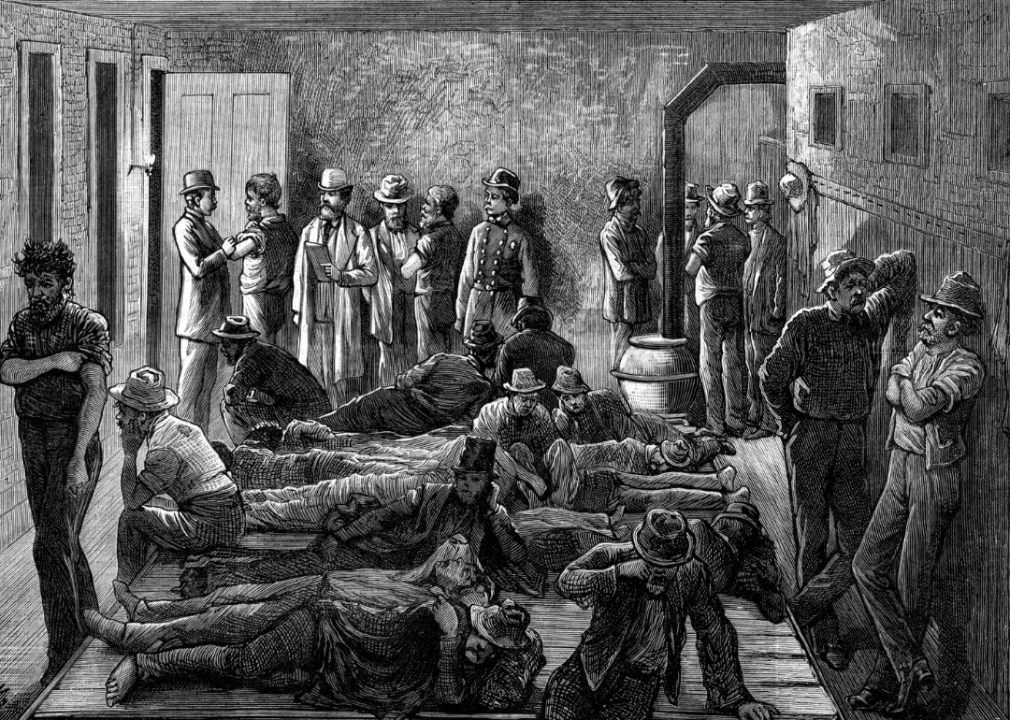 1867: The Urbana, Ohio, board of health passes a law requiring citizens to get available vaccines in the event of future epidemics

The mandate was announced in the Urbana Union on July 10, 1867. A photo of the article was tweeted by Central Michigan University professor and historian Andrew Wehrman, who authored “The Contagion of Liberty: Smallpox in the American Revolution.” Professor Wehrman shared the tweet after Ohio Rep. Jim Jordan, whose congressional district includes the city of Urbana, tweeted, “Vaccine mandates are un-American.” 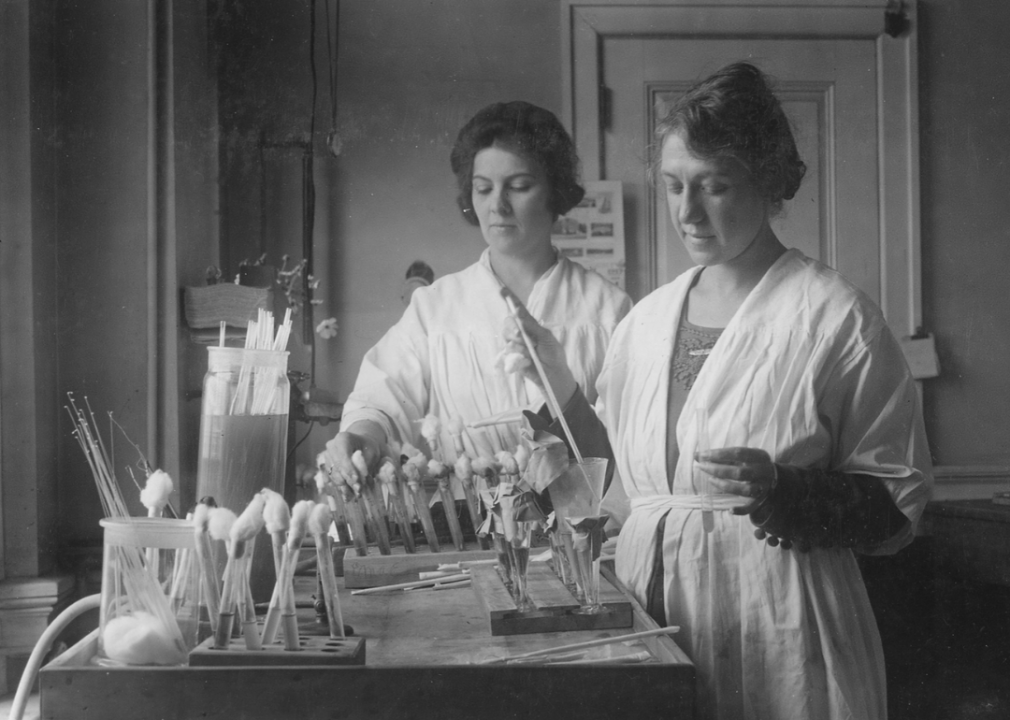 The law was passed in response to tetanus outbreaks in Camden, New Jersey, and St. Louis caused by contaminated vaccines. It is the first modern piece of federal legislation to regulate the manufacture of pharmaceuticals. The law created the Hygienic Laboratory of the U.S. Public Health Service, which eventually became the National Institutes of Health. 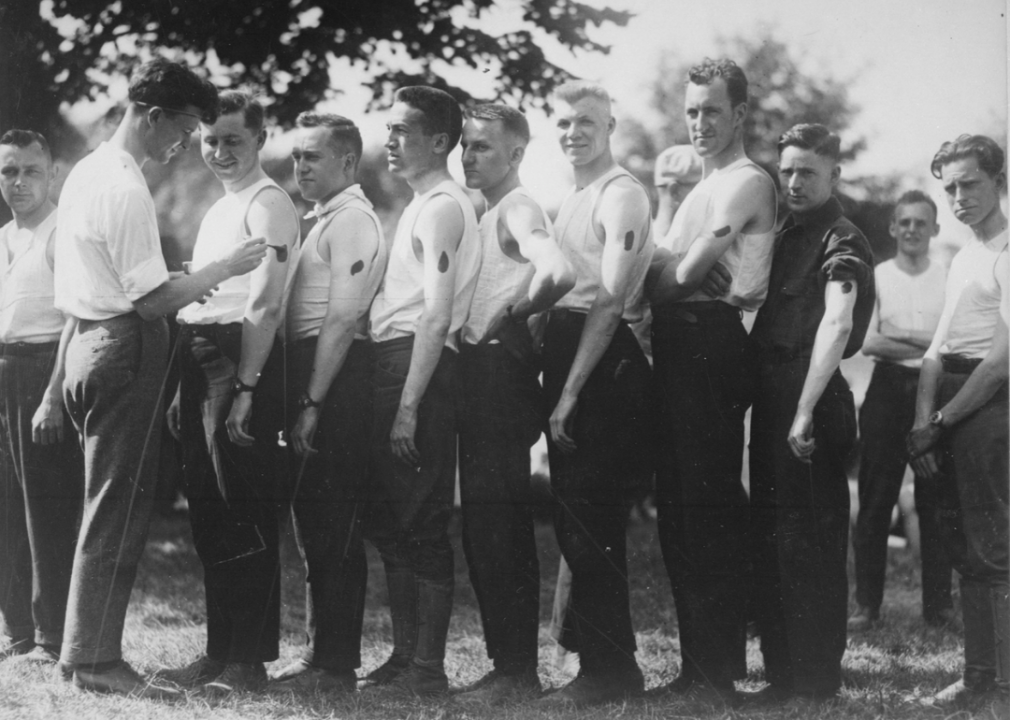 The case upheld the right of individual states to mandate vaccination. In its decision, the Court maintained that a law requiring smallpox vaccination was a reasonable exercise of the state’s right to protect public health and safety and did not violate an individual’s civil and legal rights under the 14th Amendment. 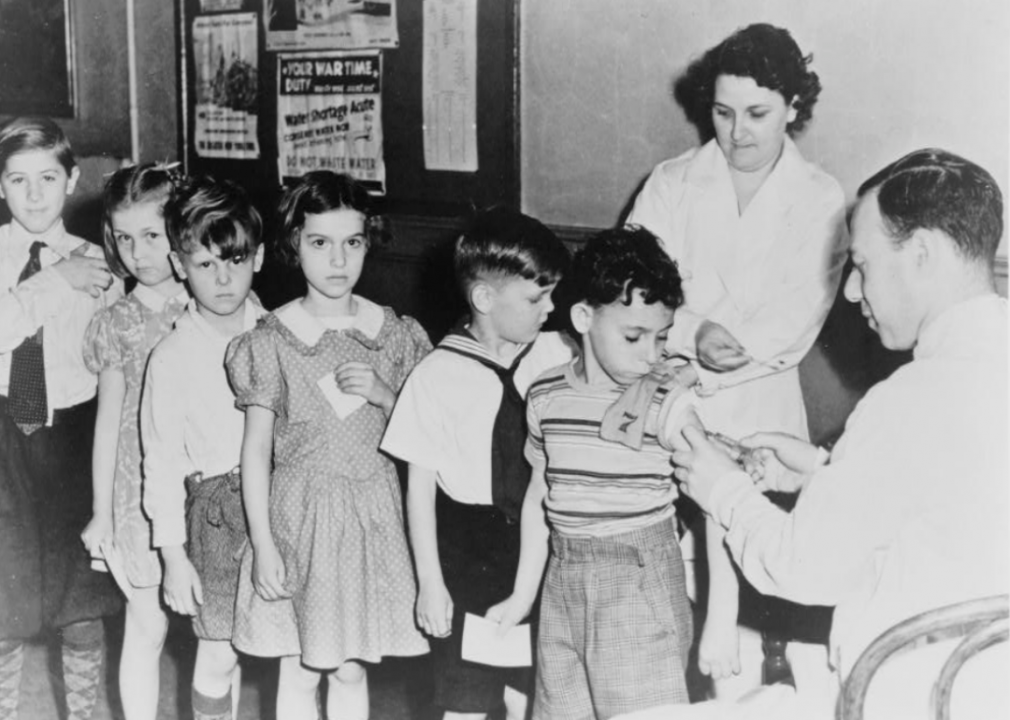 In the case of Zucht v. King, the United States Supreme Court decided that unvaccinated students could be constitutionally excluded from attending schools in the district of San Antonio, Texas. The decision upheld the right of local governments to require vaccinations as a condition for attending public schools, ruling that unvaccinated individuals could be denied access to education. The court argued that public health trumps an individual’s right to education. 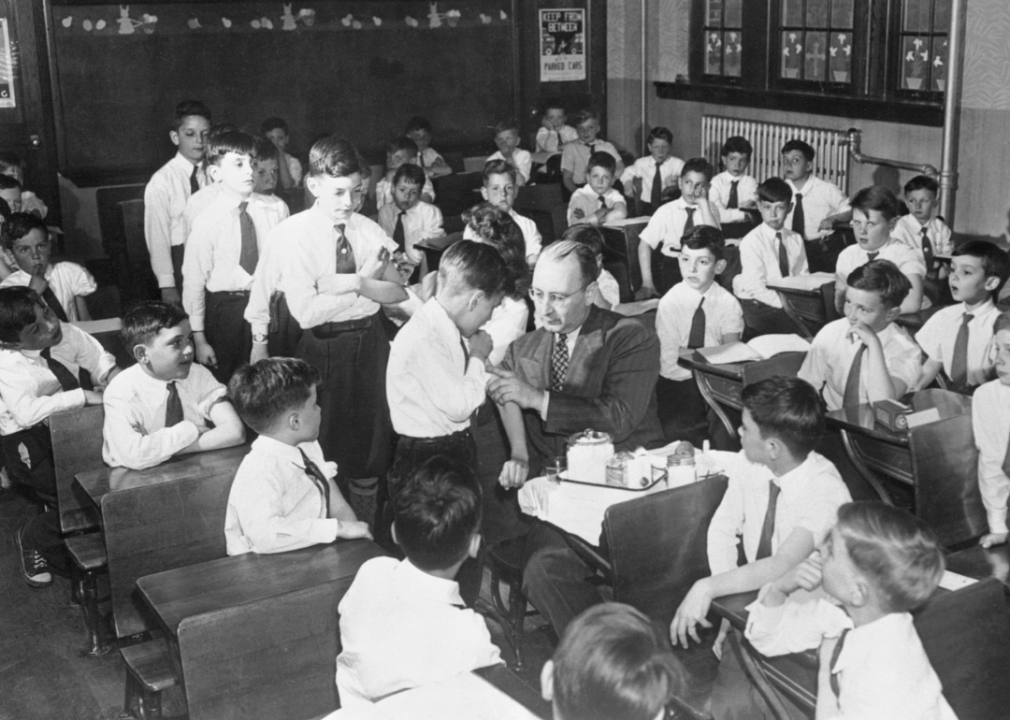 The court ruled that mandating childhood vaccines comes under the doctrine of parens patriae, in which the state exerts authority over child welfare. In their decision, the justices wrote that parental authority is not absolute and can be restricted if doing so is in the child’s best interest. They went on to say freedom of religion does not give parents the right to expose their community or their child to a communicable disease, or the child to the possibility of illness or death. 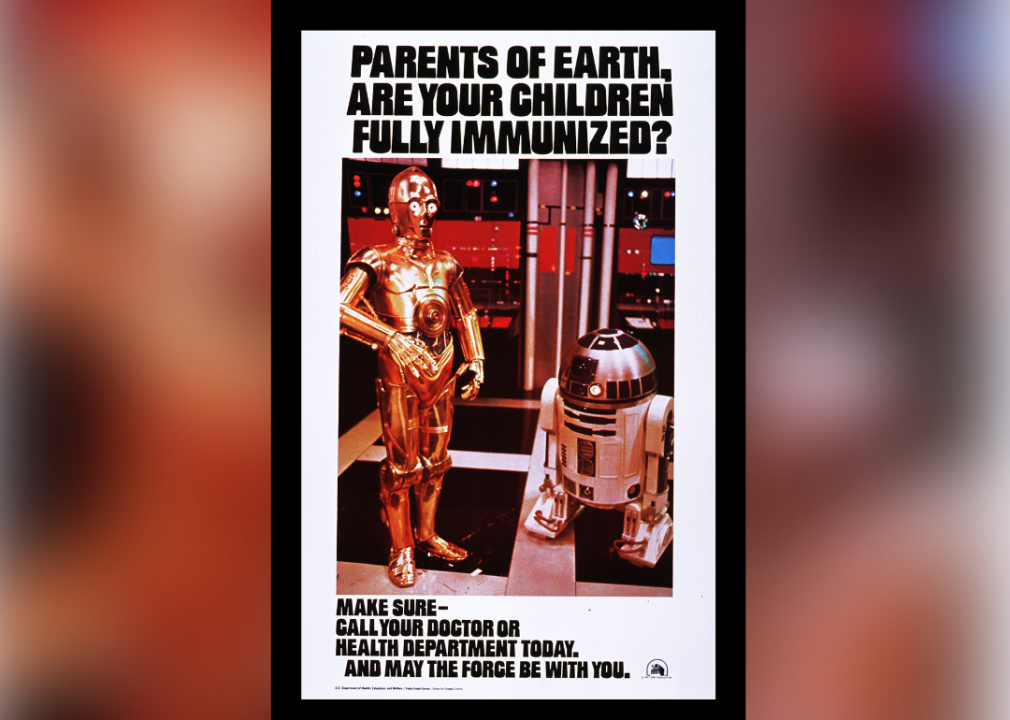 The goal of the $58 million federal program, run by then-United States Secretary of Health, Education, and Welfare Joseph A. Califano Jr., was to get 90% of children under the age of 15 fully immunized by October 1979. A nationwide advertising campaign featuring “Star Wars” characters and celebrity athletes urged parents to get their children vaccinated against preventable diseases, such as measles, mumps, rubella, polio, diphtheria, pertussis, and typhoid.

Dr. Alan Hinman, former chief of the immunization program at the Centers for Disease Control and Prevention, called the program successful. “We will meet the target for schoolage children and I think we will have clearly exceeded it when all information is in by the first of the year,” said Hinman, referring to Jan. 1, 1980. 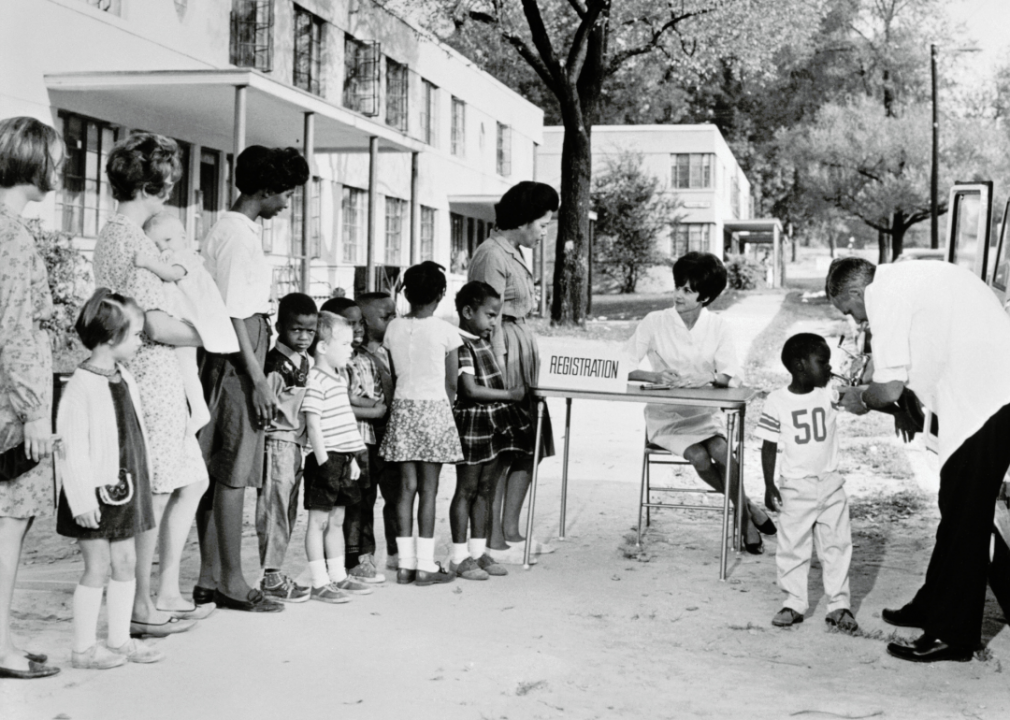 1980: All 50 states have laws requiring vaccines for children to attend public schools

In many states, the mandates applied to children at all grade levels and those in licensed preschool settings. The required vaccines were either specified in the law itself or were chosen by the state health officer or state board of health. By the 1998–1999 school year, 46 states, with the exception of Louisiana, Michigan, South Carolina, and West Virginia, had vaccine requirements for all grade levels from kindergarten through 12th grade. 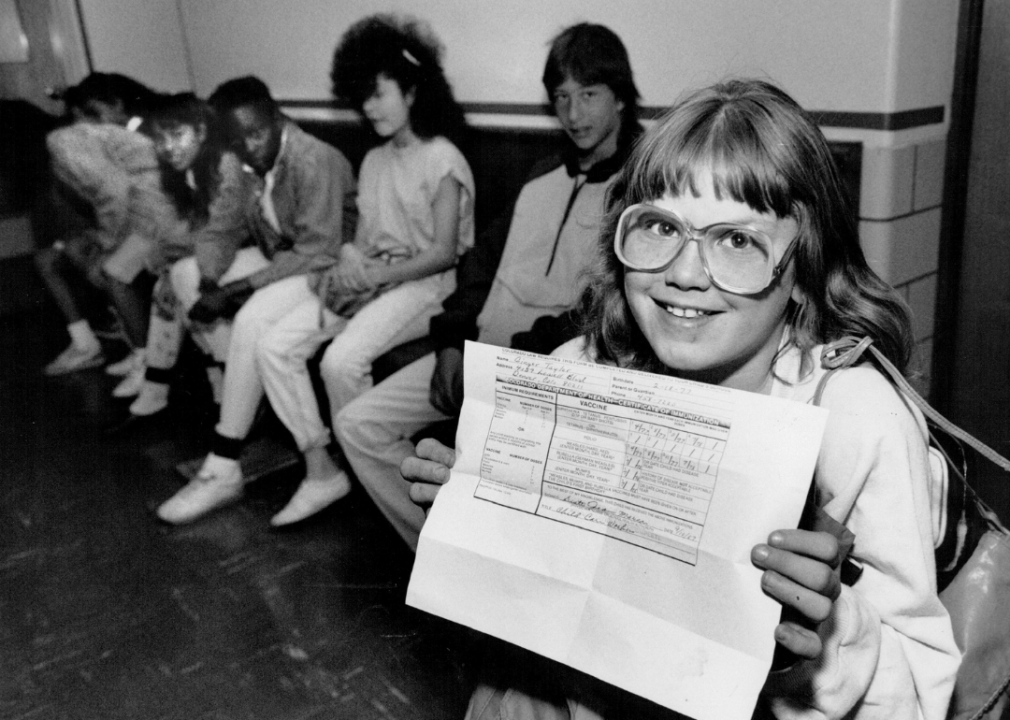 Like Jacobson v. Massachusetts, this case upheld the ability of the government to exclude students from public schools if they failed to comply with vaccine mandates. The court rejected the argument that a child’s right to an education would supersede the state’s need to protect other students from an infectious disease because even if unconfirmed, the risk of infection was too likely.

[Pictured: A middle school student shows proof of immunization against measles in April of 1989.] 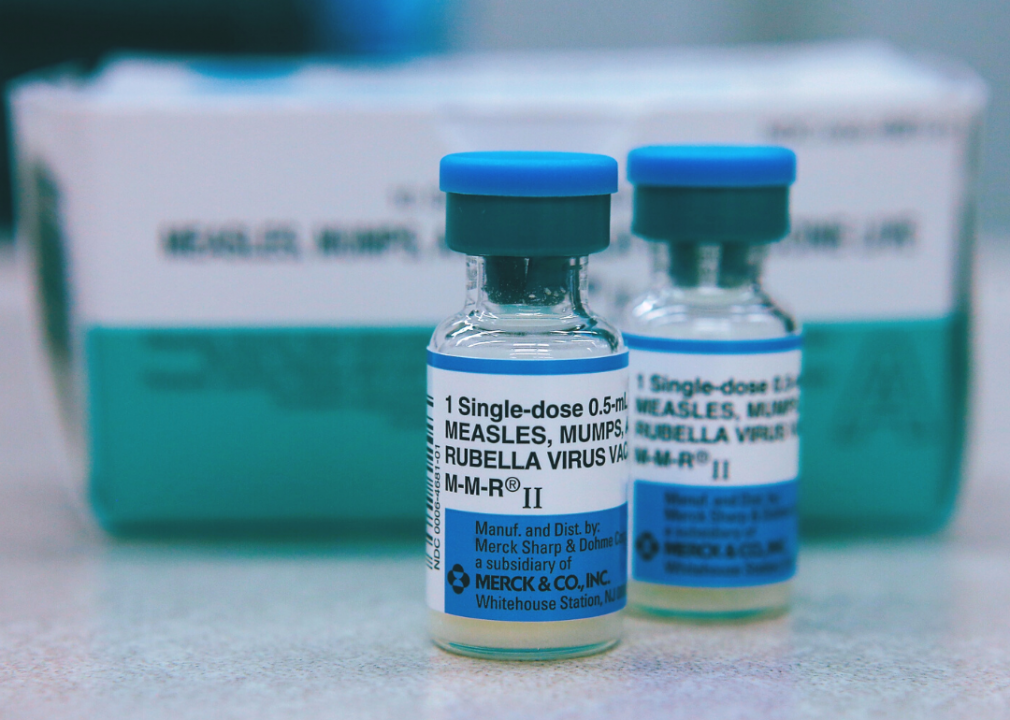 2015: California becomes the first state to eliminate personal belief exemptions to vaccines for children in public and private schools

In 2015, an outbreak of measles occurred among children in California who visited Disneyland and another theme park. Some parents were believed to be claiming a religious exemption to avoid getting their children vaccinated. Since 2015, five more states have eliminated vaccine exemptions in public schools: Connecticut, Mississippi, Maine, New York, and West Virginia. 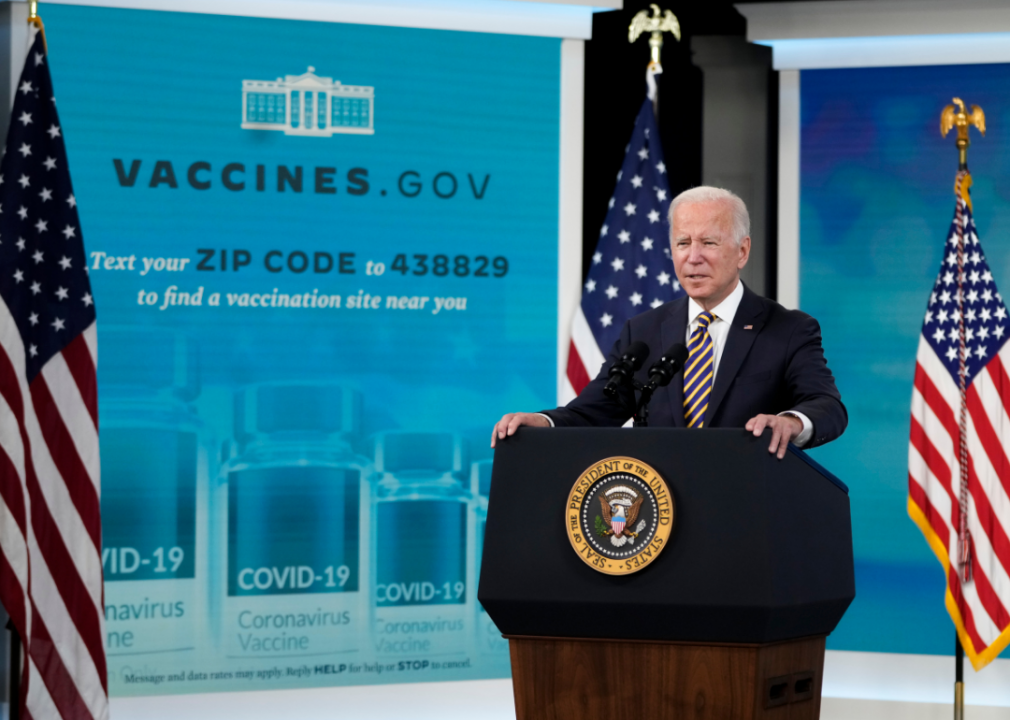 The mandate includes vaccines for all federal workers, health care workers, and workers at companies with more than 100 employees. It could apply to more than 100 million Americans. In a speech announcing this sweeping initiative, President Joe Biden said vaccinated Americans are losing patience with those who refuse to get immunized, stating, “Your refusal has cost all of us.”

[Pictured: President Joe Biden speaks in the South Court Auditorium on the White House campus Oct. 14, 2021, in Washington D.C. Biden spoke about the coronavirus pandemic and encouraged states and businesses to support vaccine mandates to avoid a surge in cases of COVID-19.]

You may also like: US cities with the cleanest air 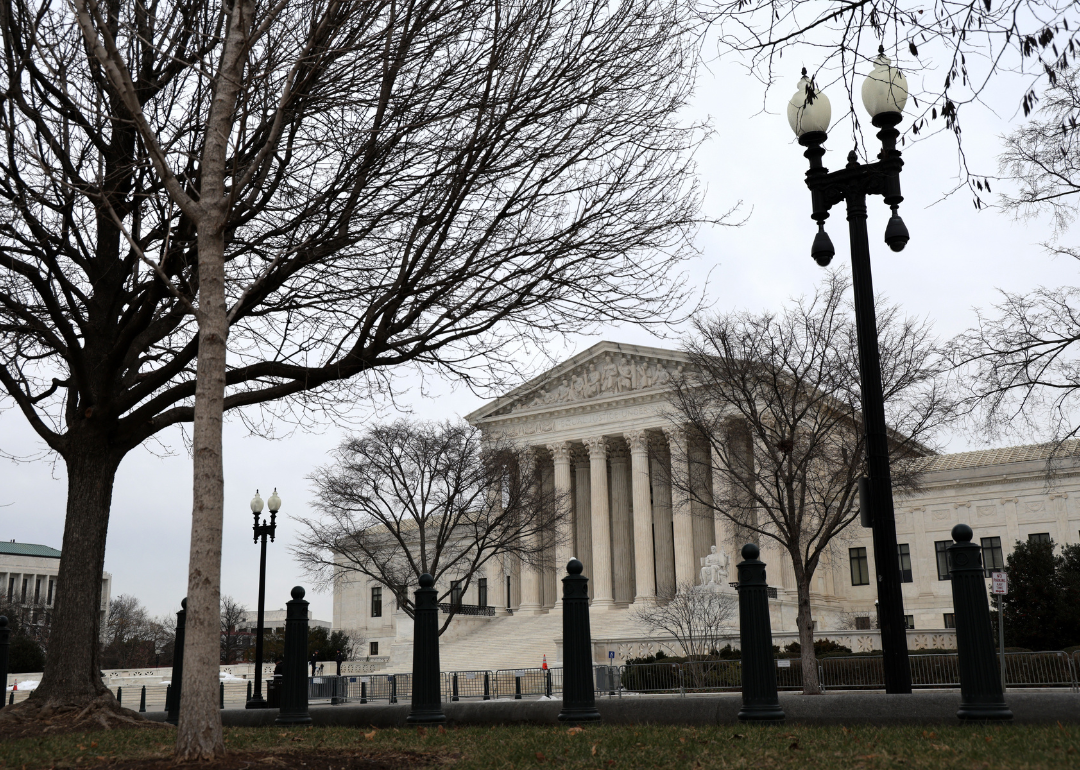 On Jan. 25, 2022, the Supreme Court of the United States struck down an order from President Joe Biden’s administration that would have imposed a COVID-19 vaccine mandate requiring businesses with over 100 employees to enforce a vaccine-or-test rule for its workers. In a landmark 6-3 opinion, however, the Court decided the Occupational Safety and Health Administration, which issued the mandate via its emergency powers just weeks prior, had surpassed its authority.

What a Roe v. Wade reversal could mean for…