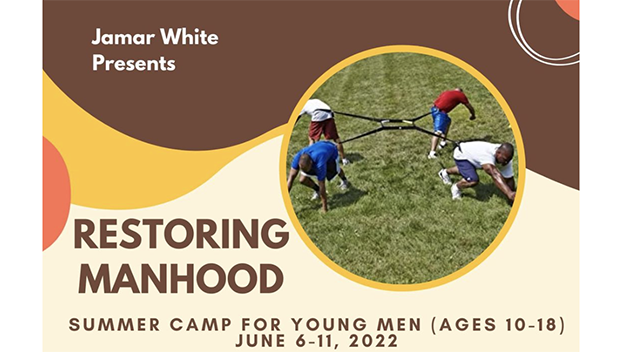 A new summer camp for young men ages 10-18 aims to teach them the life skills they need, as well as build friendships and mentors while having some fun.

Natchez’s JaMar White, who is organizing the first of what he hopes will be multiple such camps a year, said the camp is called Restoring Manhood. White said he decided to create the camp when he noticed a real need in the community.

“I want to give back to this community, and what better way of doing it than to teach young men skills they need in life,” White said. “We will teach skills every young man should have.”

The camp is set for June 6 through June 11 at the Bob M. Dearing Natchez State Park. It is immersive in nature, White said. Campers and volunteers will spend the entire week together, lodging in the cabins at the State Park.

“We will have different guest speakers each day on different topics, including planning for careers after high school and college. We are going to make sure the young men know about the opportunities to learn a trade and make sure they know they can be just as successful as someone who spends 16 years in school and earns a Ph.D.,” he said.

Campers will be taught about financial literacy. They will learn how to fish and cook, be taught how to change a tire and the basics of changing the oil in a vehicle, as well as how to tie a necktie.

The camp will also include trail walks in the State Park with the aim of teaching young men about nature native to the area, as well as to help them form an appreciation for the outdoors.

White said a number of the Natchez Greek fraternities have volunteered to help with the camp.

“The majority of the support we have received is from the male fraternities,” he said.

As people learn about the camp, they are calling White to offer their help or to sponsor a young man.

The cost is $100, which will pay for all supplies, food and lodging for the week.

“We are getting good responses from people from all walks of life. We even have young men registered from as far away as Port Gibson and Rolling Fork,” he said. “Each young man will leave the camp with their own personal fishing pole, a necktie and a t-shirt.”

“This isn’t the last camp. We plan to make it an annual camp and hope they get better and better as they go on,” he said.