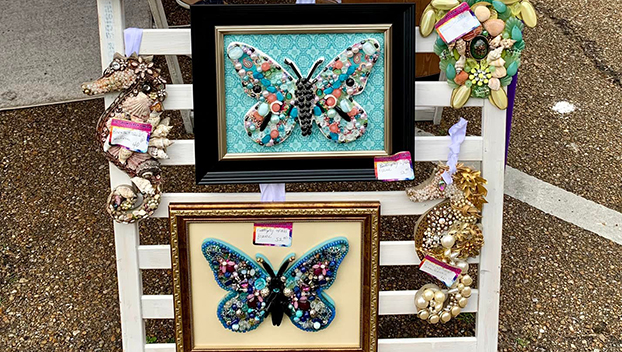 Brenda Hancox has always been artistic.

As a former employee of the Commercial Dispatch during the 1960s and 1970s, she used to work with the photo pages, creating collages of images of the Golden Triangle.

“I used to do all kinds of stuff. I’d make some pictures bigger than others and try different things,” she recalled of the pages she created, during an interview with The Dispatch.

One day, while talking with Publisher Birney Imes Jr. about her pages, Hancox found a nugget of truth that she still carries with her.

“He said that I had an artistic sense of arrangement,” she said with a laugh. “I guess that’s what I still do today.”

Now in her retirement, Hancox makes art that incorporates pieces of costume jewelry. They range from turtles to seahorses to framed pieces featuring initials, words or other shapes.

“I take all these old pieces — they may be missing a few jewels in a setting or may be broken — and try to make the colors and pieces balance,” she said.

Hancox said she started working with jewelry in the 1960s, when spoon rings became popular. She put the hobby aside for a while and traveled during her retirement before coming back to the Golden Triangle a year and a half ago.

“I found a bag of pieces that I used to sell and put together a piece of art,” Hancox said. “After it sold, I felt the urge to do something and have been making jewelry ever since.”

It takes about three to four hours to make a piece, depending on the size. While she makes some pieces using templates by lining up pieces to work within outlines, she also makes custom pieces.

“One time, I had a lady come in whose sister had died. She had all her costume jewelry and asked me if I could do something with it,” Hancox said. “She saw a bouquet that I made for someone else. I made a garden out of jewelry that she could hang on her wall to remind her of her sister instead of having it all stuck in a drawer.”

Other pieces that she had made include an owl out of clock pieces and a mermaid that features an antique bracelet Hancox wore while she worked as a buyer at Ruth’s. She also makes angels and crosses.

Hancox said she has friends who help her find jewelry for her pieces. She also looks for them while shopping.

“I now look at old jewelry and try to picture where I can put it in a piece or what I can make with it,” she said.