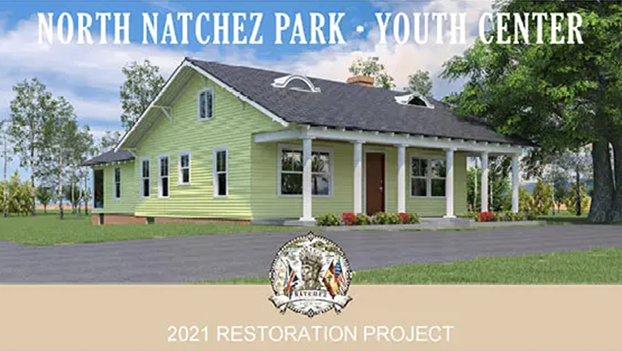 A discussion over toilets in a Natchez park led to a shouting match and accusations of unequal treatment and unfulfilled campaign promises between the mayor and a North Natchez alderman today.

The discussion became so heated and disjointed that at one point in the meeting, Sixth Ward Aldermen Dan Dillard felt compelled to dispel what he said were apparent misconceptions about the restrooms at Duncan Park.

“I have been patient with this and I want to dispel any misconceptions about the restrooms at Duncan Park. They are anything but the Taj Mahal. In fact, if you want to use them, bring your boots with you and maybe your own toilet paper,” Dillard said.

Natchez architect Johnny Waycaster, who has worked with the city to design renovations on the North Natchez Youth Center building, was seeking permission from the Mayor and Board of Aldermen at its 11 a.m. Tuesday meeting to advertise the project for bids.

During that discussion, Ward 2 Alderman Billie Joe Frazier spoke about his opinion that the outside restrooms at the North Natchez Park should be torn down and replaced with larger facilities that are Americans with Disabilities Act compliant.

“The outside bathrooms at the Natchez Youth Center need to be ADA compliant. The bathrooms out there need to be torn down and are not big enough to accommodate all the people who go there,” Frazier said.

Gibson and Waycaster pointed out that the question at hand was involving only the youth center building renovation, not any other aspect of that park or the city’s other ongoing parks and recreation projects.

Gibson told Frazier he was welcome to make a separate motion after the bid discussion and vote dealing with the addition of a restroom.

The motion to advertise for bids for the youth center passed. Waycaster said the bid process should be completed sometime near the end of June.

Later in the meeting, when Parks and Recreation Director Sanora Cole gave an update to the aldermen about the city’s park projects, she said the cost of new outside bathrooms at North Natchez Park and Concord Park was outside the city’s budget for the project.  She said the contractor was beginning work this week on pouring a new slab around the outside restroom at North Natchez Park. She said amenities will be replaced in both restrooms and each would have handicapped arm bars as well as handicapped-accessible toilets.

She said the renovations at the Duncan Park Golf Club and at the North Natchez Youth Center have each come in significantly more than expected and at this time, the city’s budget could not handle the construction of new restrooms.

Frazier balked at that idea.

“Keep in mind, Mr. Mayor, you stated whatever happens in the south side of town was going to happen on the north side of town. We need to take that bathroom down…If not, it’s a slap in the face to the people who live over there.”

Gibson loudly interrupted Frazier, saying he would not continue to hear that kind of discussion.

“Alderman Frazier, I’m sorry, but we just approved improvements to the youth center that has sat there in despicable condition for the last 20 years. And we are also discussing improvements of all our parks,” Gibson said. “I will not support or entertain any further discussion that insinuates that some ways we are being unfair to one park over another because the facts speak for themselves.

“As far as bathrooms go, this board unanimously approved the contract with Mr. Scott and that work is underway right now. It is already been signed and work is already in progress,” he said. “If you would like to propose an additional bathroom, that is your prerogative. But I will not entertain any discussion that we are in any way slighting any park over another. We are fairly looking at all of our parks.

I have to set the record straight. Let the actions speak for themselves.”

Gibson and Frazier continued their shouting match and talking over each other to the point that bits of what either was saying were incomprehensible.

Frazier accused Gibson of not living up to campaign promises. Gibson disputed that, telling Frazier to “look around this city and compare it” to years prior to his administration.

Gibson then shut down any further discussion on the subject.

During his alderman’s report, Frazier moved to add an additional restroom at North Natchez Park.

“I don’t know where we got this concept that somehow or another because it’s on the south side of town that it’s air-conditioned with shoe shine or all these amenities. The restrooms are at the very far end of it at the Bowlin Field and quite honestly the urinal runs constantly because the valve is stuck and when it rains it floods in there,” he said. “It is by no means luxury. And the only other bathroom is up by the house there and is nothing but plywood nailed around it and the ramp is so steep that if anyone handicapped got in it, I don’t know how they would get out.

“I just want to dismiss any kind of concept that any luxury has been shifted over to that park because in fact, I’m sure the golfers are using the bushes all around the golf course because there are no comfort stations on the golf course,” Dillard said.

Frazier’s motion to construct a new bathroom at North Natchez Park failed. Alderman Frazier and Alderwoman Felicia Bridgewater-Irving voted in favor of it, while Alderwomen Hall and Sarah Carter Smith and Aldermen Ben Davis and Dillard voted against it.