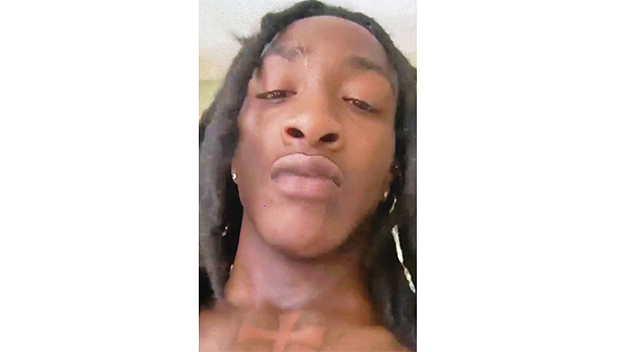 A manhunt in Woodville continues tonight for Jacory Carr, 24, wanted in the May 5 murder of a man in Centreville and the shooting of a woman this morning in Woodville.

Woodville Police Chief Lemuel Rutledge said his officers were called to the scene of a shooting at about 9 a.m. Tuesday morning on First West Street in Woodville.

“The woman who was shot stated she was in her house when Jacory Carr came in and asked for someplace to hide out. She refused, which is when he went outside and fired 15 shots into the house,” Rutledge said.

The woman was struck in the hip and airlifted to Our Lady of the Lake Hospital in Baton Rouge. She was treated and released today.

Rutledge said the woman had two children in her home — a one-year-old and a kindergarten-age child — but neither was injured.

With the help of a number of law enforcement agencies, including the Natchez Police Department SWAT Team and the Adams County Sheriff’s Office Special Operations Unit, law enforcement searched for Carr most of the day and night on Tuesday. However, he remains at large at the time of this report.

The manhunt team caught up with Carr at one time, but Carr was able to elude them. However, he did fire shots at officers, who returned fire.

During that exchange of gunfire, Rutledge was pierced in his underarm area by a splinter of wood that flew off when it was hit by gunfire.

“It hit me in the area where my vest doesn’t cover, but I was not hit by a bullet. Everybody panicked for a moment, but I’m OK,” Rutledge said.

“He does appear to be injured. We don’t know if he was shot when we returned fire, or if he was injured when he jumped into a creek,” Rutledge said. “He is heavily armed and is dangerous.”

He said Carr, originally from New Orleans, moved to the Woodville area after Katrina. Rutledge said Carr is on foot and it is believed to still be in the area.

Any resident who sees Carr should immediately call 9-1-1 and not interact with Carr if at all possible, he said.

Centreville Police were called to Pinetree Manor Apartments in that city on May 5, where Gerrit Decody, 31, was found dead. Carr is a suspect in that killing. Centreville Police searched several locations in Woodville on Sunday for Carr.

Adams County Sheriff Travis Patten said Carr’s prior history is one of violence.

“The acts he is accused of committing are extreme when it comes to violence. We answered the call for assistance just like everybody else did in hopes of trying to put this situation to rest. Unfortunately, we were unable to capture him,” Patten said.

Patten said the U.S. Marshal’s Office would be called in to take over the search for Carr.