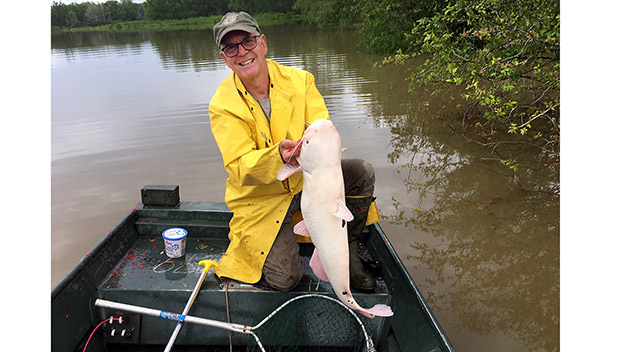 Photo courtesy of the Woodville Republican

Two Mississippi men recently got the surprise of a lifetime when a fish they caught on a trotline in a Mississippi backwater turned out to be a rare catch.

Herbert Dooley and Mitchell Whitaker caught an albino catfish recently and took a picture of the rare fish before releasing it back into the water to live another day.

The Woodville Republican newspaper in Woodville, Mississippi, published the picture of Whitaker and the fish in its May 12 edition.

“Needless to say, I was a bit taken aback when it broke the surface,” Whitaker said. “Other than a few small spots of dark coloration and a pinkish tint to the fins, it was snow white all over.”

Whitaker said the eyes of the rare fish did not have red eyes and were more like a normal catfish.

“But I read an article that indicates not every case of albinism results in red eyes,’ Whitaker said.

Catching an adult albino fish in the wild is considered by many to be a “one in a million” catch.

“Because of its uniqueness, we took a picture and then released the unique fish back into the water. Who knows, maybe some lucky angler will come across it again one day,” Whitaker said.