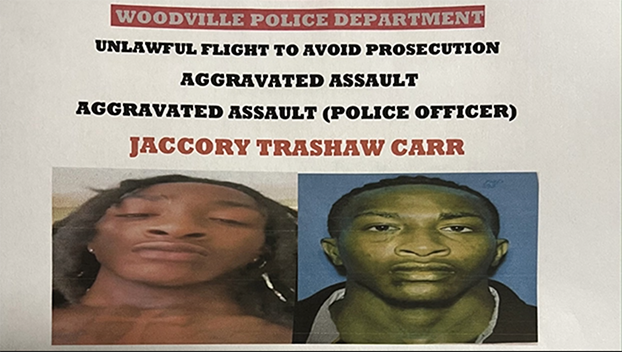 Murder suspect Jaccory Carr, 24, is still on the loose after eluding a manhunt involving officers from 12 different law enforcement agencies, including trained search dogs from nearby Louisiana State Penitentiary at Angola.

Carr is suspected of shooting and killing Gerrit Decody, 31, on May 5 at the Pinetree Manor Apartments in Centreville.

Centreville Police searched several locations in Woodville on Sunday for Carr, but did not locate him.

On Tuesday morning, Woodville Police were alerted by a report of shots fired at a home on First West Street in Woodville. Upon arrival, officers found a woman suffering a gunshot wound to the hip. She told police Carr came to her home and wanted her to hide him there. When she refused, she told police Carr went outside and fired 15 shots into her house, one of them striking her in the hip.

The woman was airlifted to Our Lady of the Lake Hospital in Baton Rouge, where she was treated and released later Tuesday.

The woman had a one-year-old and a kindergarten-age child with her in the home. Neither was injured.

Woodville Police Chief Lemuel Rutledge said officers from a number of surrounding agencies, including the Natchez Police and, later in the day, the Adams County Sheriff’s Office, joined in the hunt.

At one time, officers caught up with Carr, who fired shots at the police. Officers returned fire.

“He does appear to be injured. We don’t know if he was shot when we returned fire, or if he was injured when he jumped into a creek,” Rutledge said.

He said Carr is heavily armed and dangerous and urged residents who think they see him or know where he is to call 9-1-1 immediately. He asked that residents not approach Carr or try to apprehend him themselves.

“We are following up on a number of tips from citizens about where he is, but so far, he remains at large,” Rutledge said.