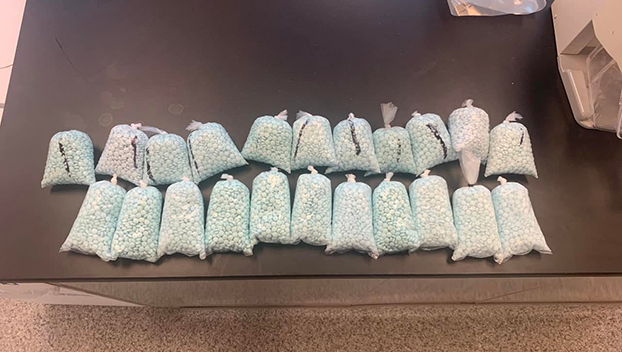 After further lab analysis, a container filled with what was first thought to be $600,000 worth of Oxycodone has been confirmed to be counterfeit pills composed of  ‘very lethal doses’ of Tylenol and Fentanyl.

Investigators from the Hinds COunty Sheriff’s Office are still looking for the owner after they found the the container filled with more than 22,000 pills near Interstate 55 near Elton Road in south Jackson.

The container was discovered on May 11, 2022. The Hinds County Sheriff’s Department, Mississippi Bureau of Narcotics, and Homeland Security started the investigation when a K9 officer provided a positive odor response to the container. Investigators obtained a search warrant for the container.

During the execution, Investigators located approximately twenty-two (22) clear bags in a safe containing blue pills. The pills contained the markings M/30 on them. The pills were initially identified as Oxycodone.

Later, HCSO issued an update: “After further lab analysis, the pills have been confirmed to be counterfeit and are composed of Tylenol and Fentanyl. These should be considered very lethal doses if consumed. ”

If anyone has any information on this case, contact the Hinds County Sheriff Office at 601-974-2900