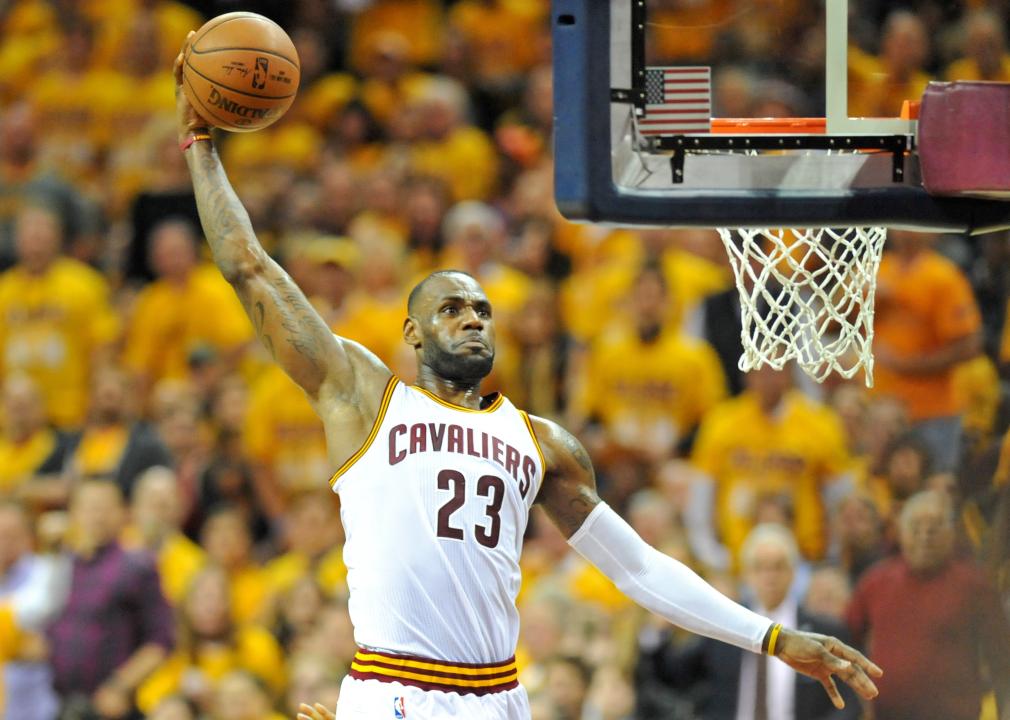 Just as they elevate to the basket for slam dunks, the best NBA players instinctively elevate their game when it counts the most—and nothing counts more than the NBA Finals. Points scored are not the best gauge of a player’s value in a series because any superstar faces extra defensive pressure. Also looking at a star’s assists and rebounds help. But an even better way to compare the top Finals individual performances is a stat called BPM.

BPM stands for box plus/minus, which measures a player’s effectiveness by calculating how many more (or fewer) points their team outscored the opponent when that player is on the court. Stacker determined the 10 best BPM performances across NBA Finals using data from Stathead. BPMs are only available for Finals beginning in 1974. Players with less than 100 minutes of court time in the Finals were left out.

Proof that BPM is an effective stat is that it typically predicts a Finals MVP; the top seven players on this list all earned that honor. BPM is also a solid predictor of a team’s success as only two players on this list fell on the losing side in the Finals. Coincidentally, both played for the Miami Heat at the time.

You may also like: Biggest blowout wins in golf major history 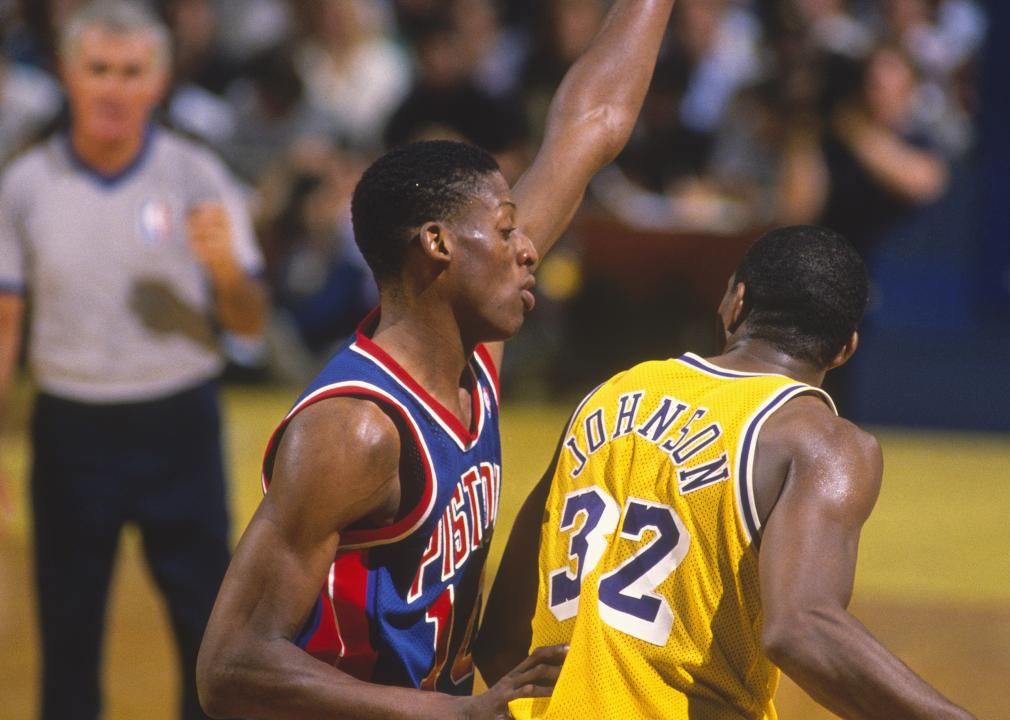 Earvin Johnson Jr. was one of the greatest basketball players of all time, with three NBA MVP awards to show for it. But his play during this classic series against a powerful Pistons squad can best be described as “magic.”

It was the last of five Finals victories for the Magic-led Lakers, and although it was statistically Magic’s best, he didn’t win the Finals MVP crown as he did at three previous Finals; teammate James Worthy did. It was an especially hard-fought Finals, with the Lakers winning in dramatic fashion by taking Games 6 and 7 by scores of 103-102 and 108-105, respectively. 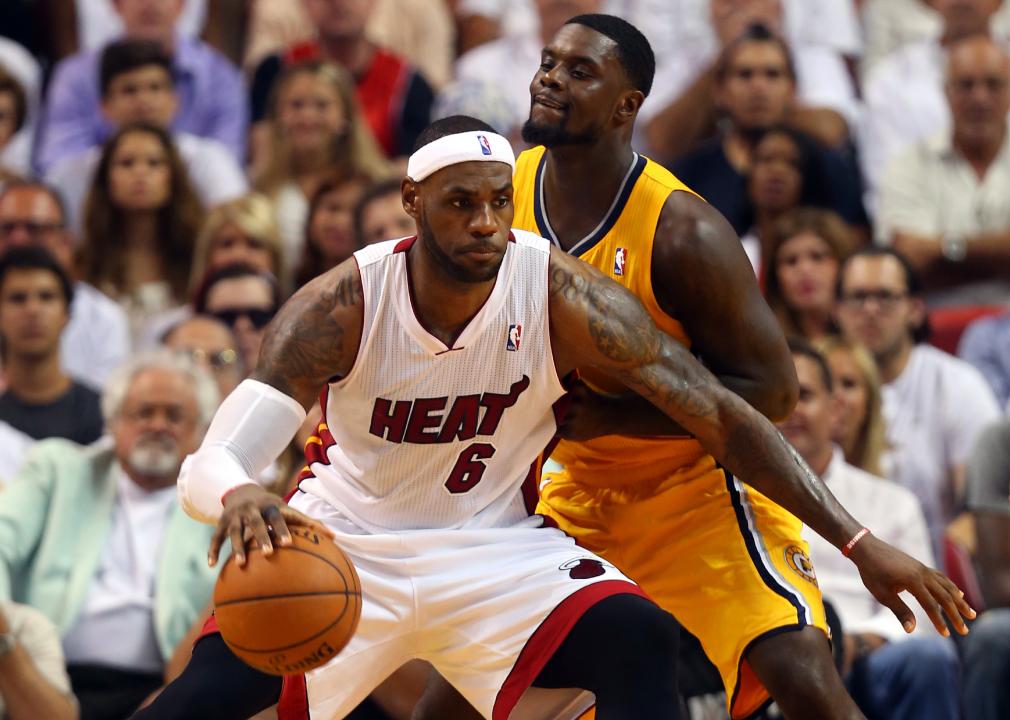 It’s easy to forget that before he joined the Lakers or his hometown Cavs, LeBron sizzled for the Heat. While his stats were head-turning in this Finals, he was only able to lead Miami to one win—in Game 2, when he scored 35 points on 64% shooting.

Ultimately, the Spurs’ team tactics, instilled by legendary Spurs coach Greg Popovich, foiled the individual mastery of LeBron, who led all scorers in four of the five games. LeBron had some solid teammates, led by Dwyane Wade, Chris Bosh, and Ray Allen, but they couldn’t keep up with the brilliance of Tony Parker, the energy of a young Kawhi Leonard, and the cunning of veterans Tim Duncan and Manu Ginobili. It was a sour ending for LeBron’s time in a Heat uniform. Because bold and flashy play and players get more attention than consistency and longevity, Tim Duncan is one of the NBA’s most underrated superstars. But that doesn’t mean he couldn’t quietly take over a series. He did just that in this Finals as the leading rebounder in every game, with 20 in Games 1 and 6, and led or tied all scorers in Games 1, 4, 5, and 6.

His 102 rebounds were more than the next three leading rebounders on the team combined, and his 145 points nearly topped the 149 scored by the next two highest Spurs scorers combined, fellow stars Tony Parker and David Robinson. He may not have single-handedly beaten the Nets, but few players have dominated a Finals so thoroughly. 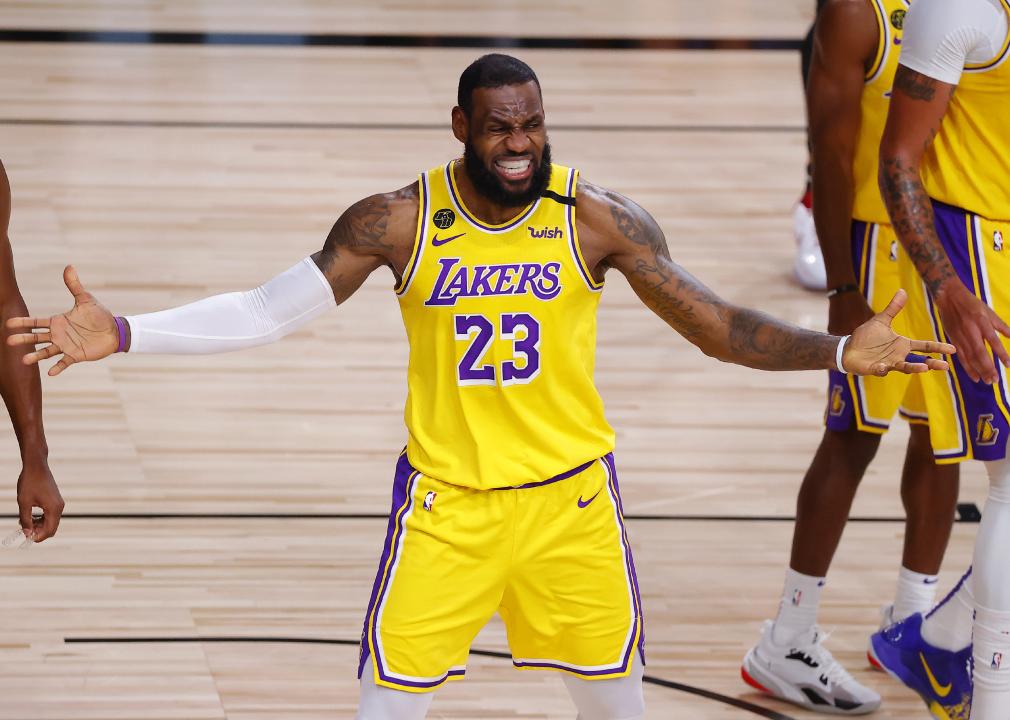 The 75th NBA season was also the shortest, with just 72 games, drawing the fewest spectators. Most arenas were limited to 5% to 20% capacity due to COVID-19 restrictions. But it still counted as a “real” season, and LeBron took full advantage by leading the Lakers to a title, just as he did when he played for Miami and Cleveland. Also as LeBron routinely did for those teams, he upped his game, averaging more points, rebounds, and assists than during the regular season.

The man who many believe rivals Michael Jordan as the NBA’s GOAT (greatest of all time) led all scorers in four of the six games against his old team and led all rebounders in three games. He peaked with a 40-point Game 5 and 15-rebound Game 6. 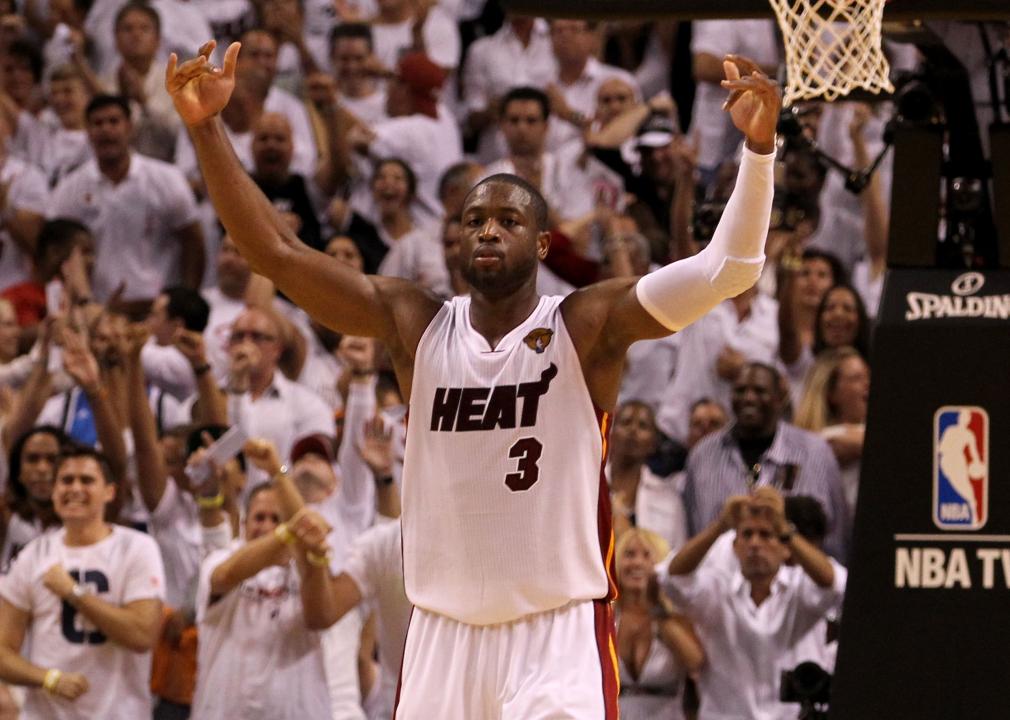 When you think of the basketball greats, it’s easy to overlook Wade—the Scottie Pippen of the Heat. Just as Pippen never emerged from the shadow of MJ, Dwyane Wade was overshadowed by LeBron James. Yet in this Finals, Wade matched or beat LeBron in almost every statistical category—LeBron only scored 107 points compared to Wade’s 159.

It wasn’t enough to win the title, but it almost was as every game proved close—three of them settled by a single basket. Wade was in the middle of it all.

You may also like: Stories behind every NFL team name 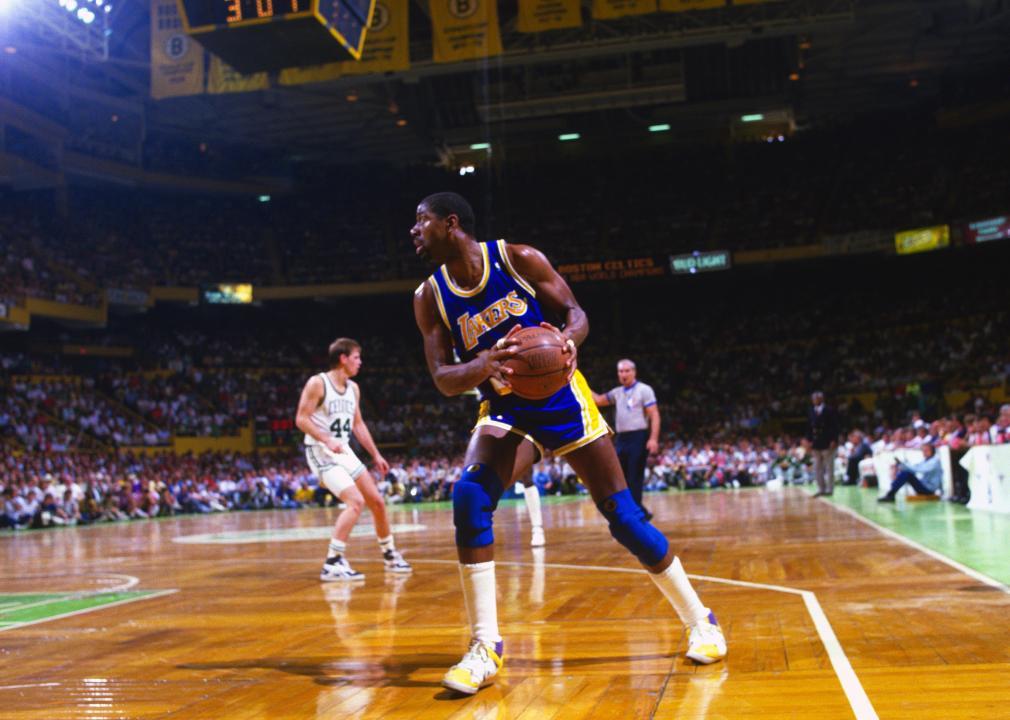 Lakers-Celtics is arguably the NBA’s greatest rivalry, largely because the two teams have met 12 times in the Finals. Among those matchups, few compared to this one, when Boston could do little to tame the talents of Magic and sidekicks Kareem Abdul-Jabbar and James Worthy.

Boston’s Larry Bird had a couple of ace accomplices himself in Kevin McHale and Robert Parish—good enough to let them take Games 3 and 5—but it wasn’t enough. Magic was simply at his best. When Kareem wasn’t open under the basket, he sunk shots himself from all over the court.

Magic abruptly retired four years later when he announced his HIV status, but has thrived as a public speaker and basketball broadcaster for more than 30 years. 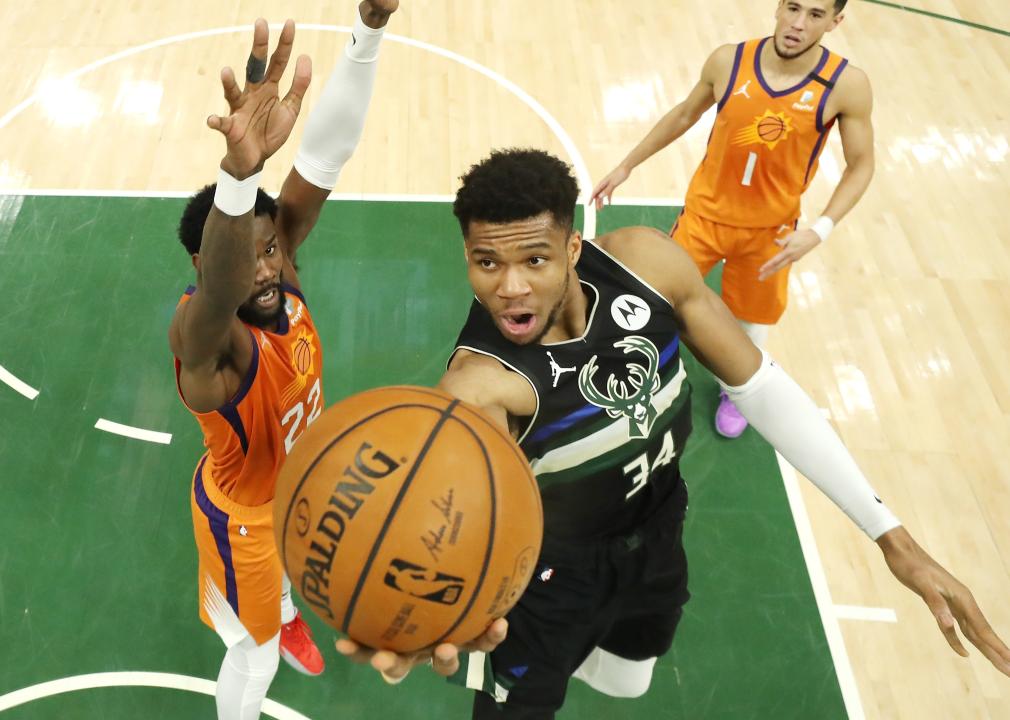 At this Finals, the “Greek Freak” proved, like Michael Jordan, one superstar in his prime can dominate a series even in the absence of A-level teammates. The Athens-born son of Nigerian immigrants did much more than waiting for a rebound under the basket as many 6-foot-11 players do.

The Suns knew that because Giannis shot a perfect 16-for-16 at the 2021 All-Star Game, a performance that earned him All-Star MVP honors, another MVP trophy at this Finals was as predictable as dandelions after a spring rain. They also knew he had next-level rebounding and ball-handling skills. As if to add an exclamation point in the Finals, Giannis scored a staggering 50 points and added 14 rebounds in Game 6—nearly half of his team’s total in that 105-98 deciding game. 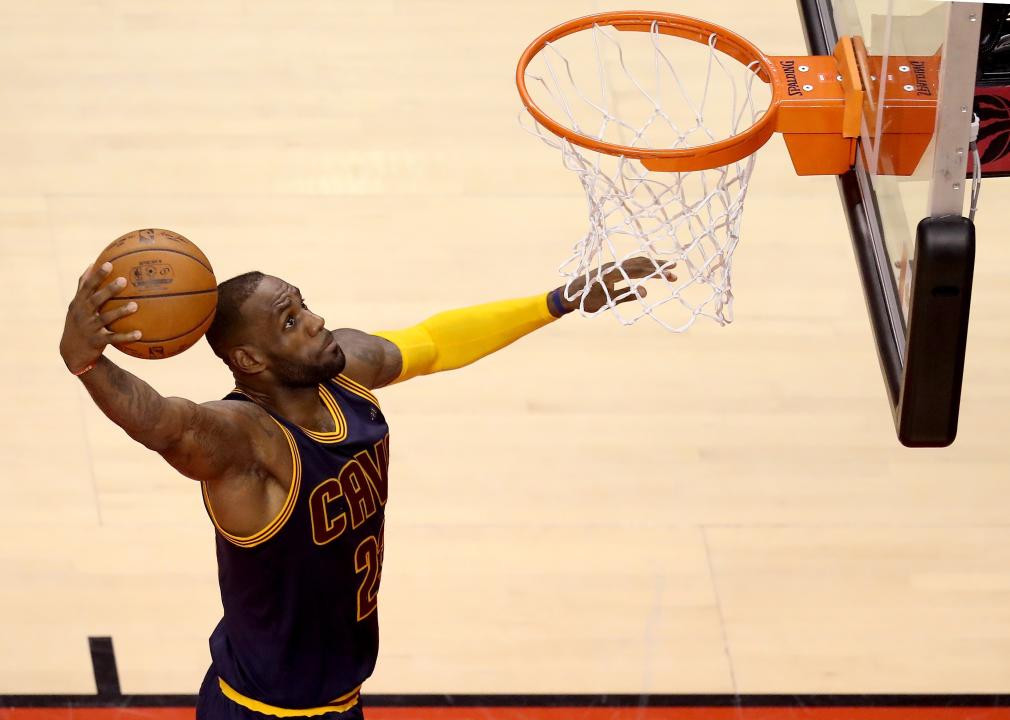 This meeting of titans was a showdown between the superstar-laden Warriors (Stephen Curry, Klay Thompson, and Draymond Green) and the LeBron-Kyrie show. The Cavs needed all seven games to seal the deal, but they did so in a spectacular fashion that Cleveland fans celebrated for days.

LeBron and Kyrie Irving each scored more than either of the “Splash Brothers,” with LeBron pouring in 41 points in Game 5 and 41 more in Game 6, setting the Cavs up for a shocking series win after being down three games to one. 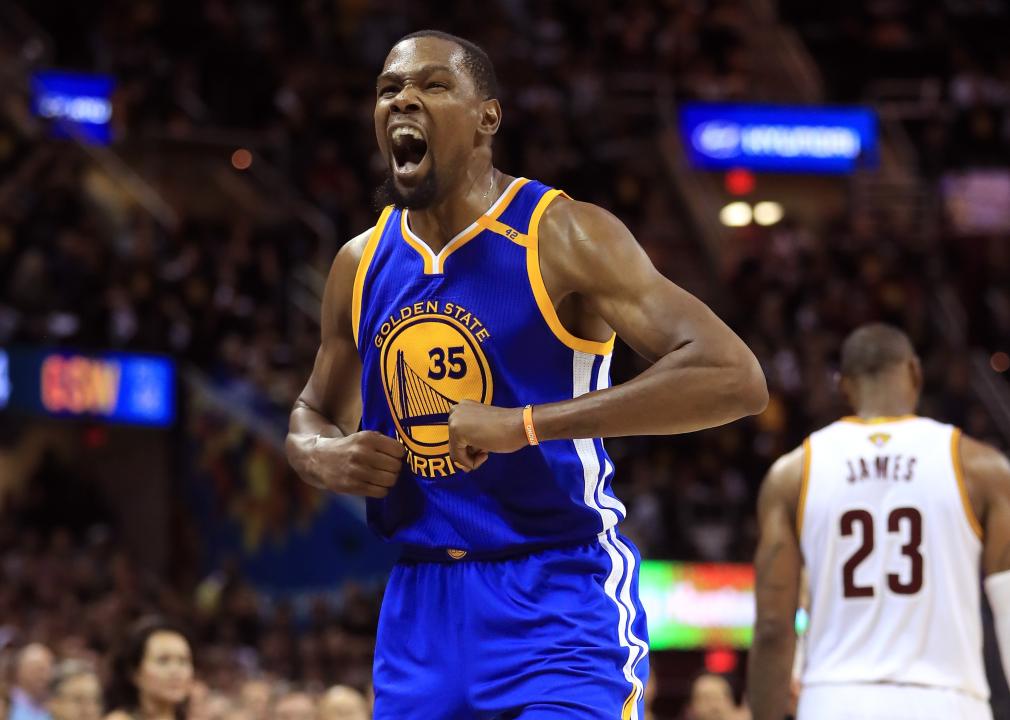 When Kevin Durant joined a Warriors team already loaded with superstars, fans wondered if he would fit in. Coach Steve Kerr preaches a gospel of joy and laid-back fun, which does not necessarily suit Durant’s intense personality. But somehow, it worked for three seasons, mostly because Durant came to Chillsville for the sole purpose of being on a championship team.

Refusing to let the LeBron-led Cavs push him around, Durant’s 38-point Game 1 set the tone for Golden State’s five-game romp. In this Finals, he scored 42 more points than Steph Curry and nearly twice as many points as Klay Thomspon. 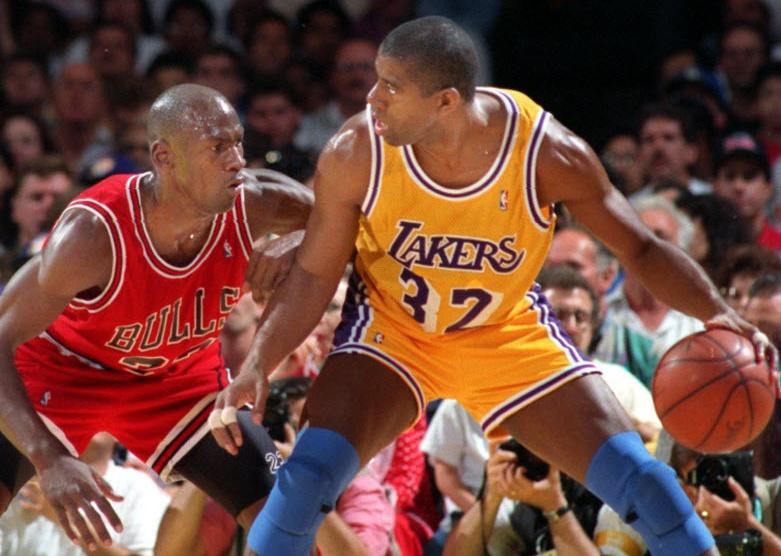 NBA fans love to debate whether MJ, LeBron, Giannis, Wilt Chamberlain, or some other player is the GOAT. Evidence that favors Jordan can be found in his 1991 Finals performance. Jordan’s Bulls were going up against a Magic Johnson-led Lakers team, yet the Lakers only won Game 1 by two points.

Jordan made sure there was no need for a Game 6 or 7 by taking over the series as the leading scorer in the first four games and feeding the ball to Scottie Pippen often enough to make him the top scorer in the final game. With both defenses focused on their opponent’s superstar, Jordan (11.4) and Johnson (12.4) did a lot of passing and led their teams in assists. 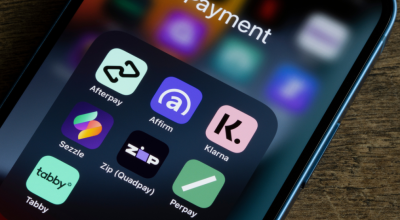 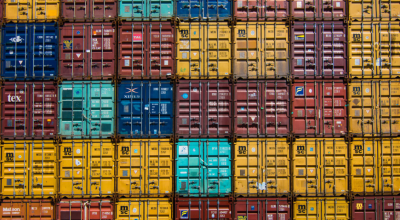 Data breaches are more costly for these 10 industries