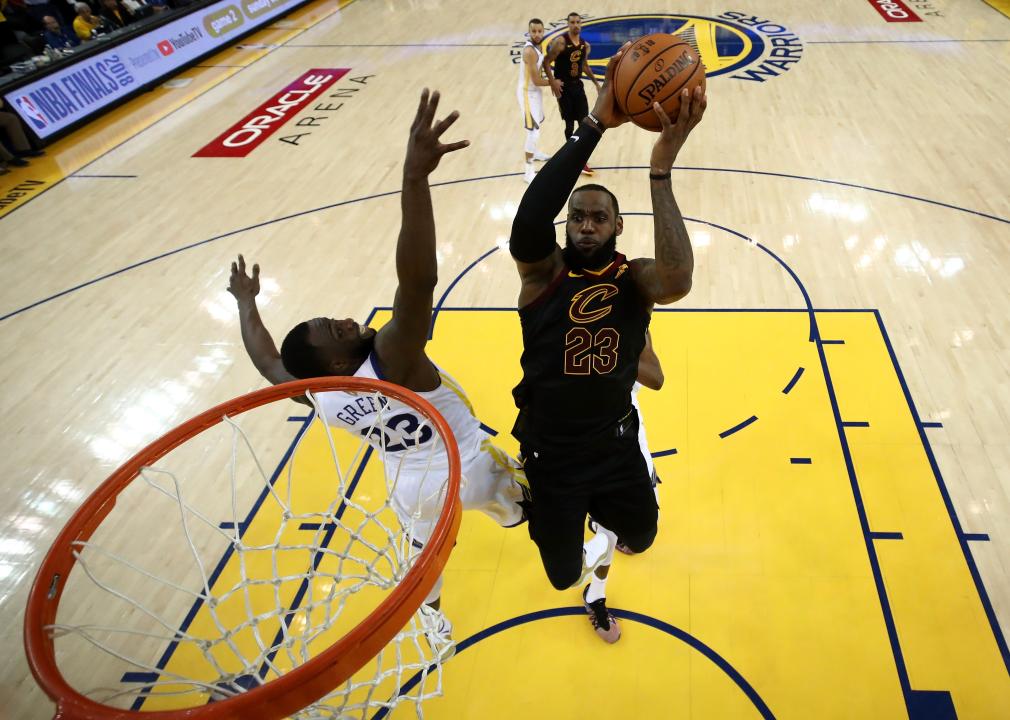 Scoring more than 40 points in the NBA Finals is a major career milestone. A player scored 40-plus points only 66 times in NBA Finals history. Legends like Kobe Bryant, Magic Johnson, Wilt Chamberlain, Kevin Durant, and Allen Iverson only did it once in their illustrious careers.

Stacker ranked the players with the most 40-plus point games in NBA Finals history using data from Stathead. This data set includes the total number of qualifying games for each player, the team or teams the player scored 40-plus points for, and the first and last years the player achieved 40 or more points in an NBA Finals game.

The Lakers dominate the history of 40-plus point games on the NBA’s biggest stage. The Minneapolis or Los Angeles Lakers own 27 40-plus point games in NBA finals history. No other team features more than nine 40-plus point performances during the finals. And four of the top seven players on this list scored more than 40 points in the NBA Finals at least once while playing for the Lakers, the NBA’s most championship-winning franchise.

You may also like: Famous baseball players from every state 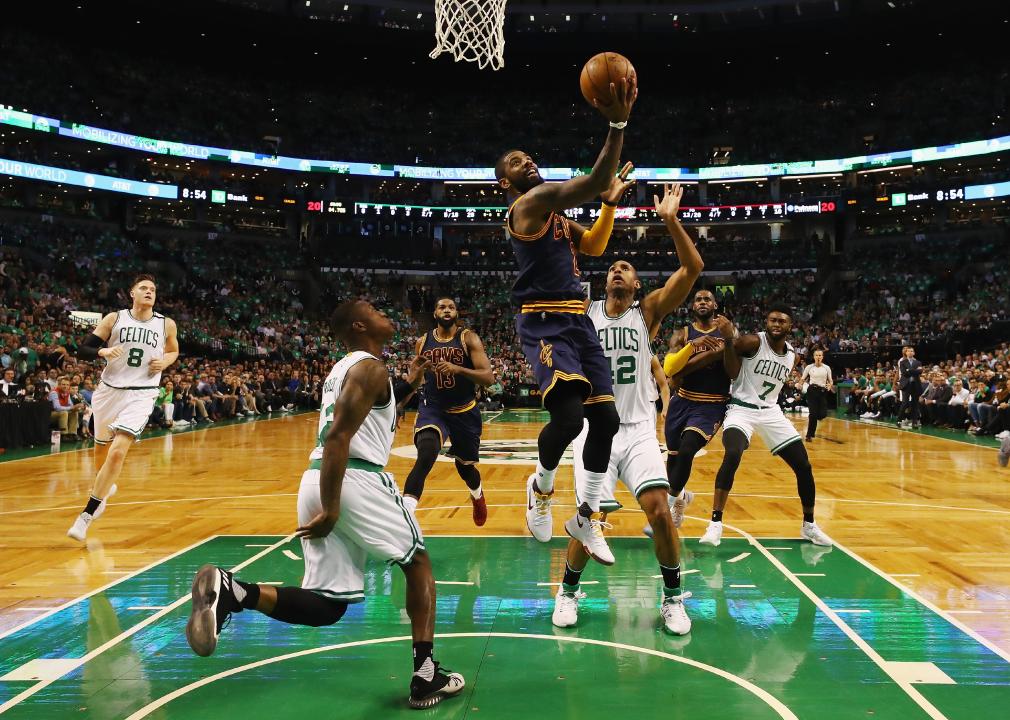 Lakers center George Mikan was the first player to score 40 points in the NBA Finals. He hit the mark in the first game of the 1949 finals versus the Washington Capitols. Mikan did it again in Game 6 versus the Syracuse Nationals in 1950 to win the Lakers’ second-consecutive title.

Celtics forward John Havlicek put up more than 40 points in Game 6 of the 1968 finals, and again in Game 2 of the 1969 finals. Both times were against the Lakers. St. Louis Hawks forward Bob Pettit dropped 40-plus points versus the Celtics in the 1958 and 1961 finals.

Dwyane Wade scored 40-plus points twice versus the Dallas Mavericks en route to his first NBA Championship in 2006. Kyrie Irving scored 40 points in Game 4 of the 2017 NBA Finals to help the Cavs secure their only win in the series versus the Warriors. He dropped 41 in Game 5 of the finals the year before, when Cleveland beat Golden State for the title.

Devin Booker scored 40-plus points twice in his first NBA Finals appearance when the Suns faced the Milwaukee Bucks in 2021. 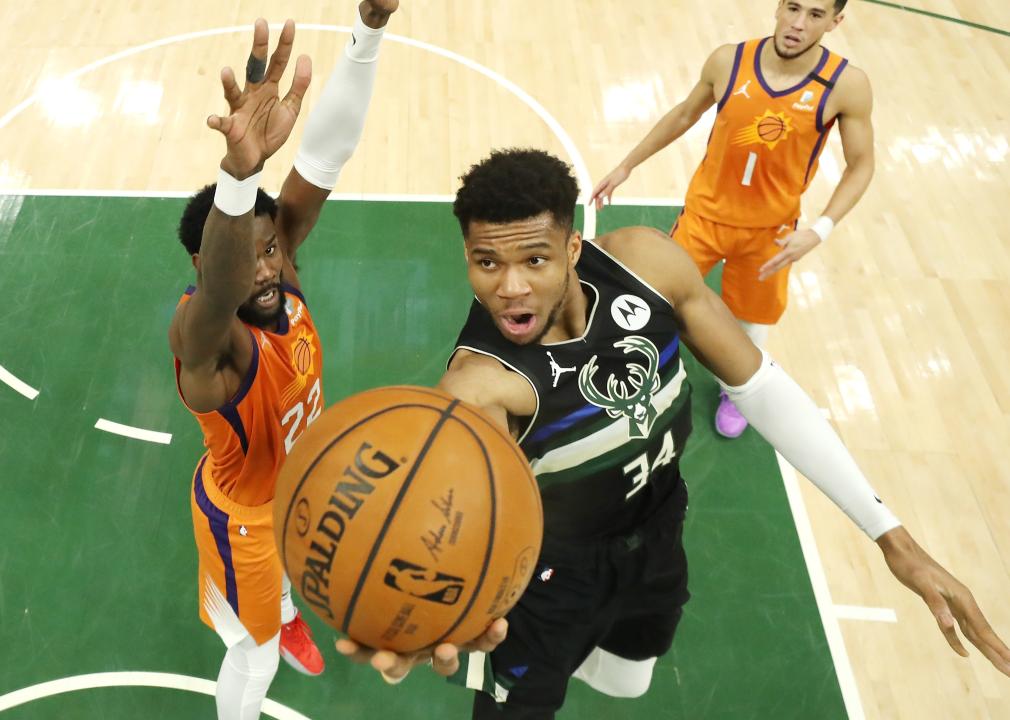 Giannis Antetokounmpo joined the multiple 40-point games club in 2021. He scored over 40 points three times versus the Phoenix Suns. This included 50 points in the 105-98 Game 6 win to seal the NBA Championship. He also put up 41 points in the Bucks’ Game 3 win and 42 points in their Game 2 loss.

Antetokounmpo averaged 35.2 points, 13.2 rebounds, and 5 assists over the six-game series against the Suns. The Milwaukee forward won the NBA Finals Most Valuable Player along with his first Championship at age 26. It had been 50 years since the Bucks previously won an NBA title. Rick Barry dropped over 40 points three times in the 1967 NBA Finals. Barry scored 55 points in Game 3 to help the Warriors secure their first win in the series. He added 43 points in Game 4 and 44 points in Game 6, but lost both games.

Barry came close to scoring 40 two more times in the series. The Warriors forward finished with 37 points in the Game 1 loss and 36 points in a Game 5 win. He averaged 40.8 points, 8.8 rebounds, and 3.3 assists over the six-game series.

The Warriors fell to the Philadelphia 76ers 4-2 in 1967, and 76ers center Wilt Chamberlain won MVP of the regular season. Barry would wait until 1975 to finally win an NBA Championship. He did not score more than 40 when he finally won an NBA title. 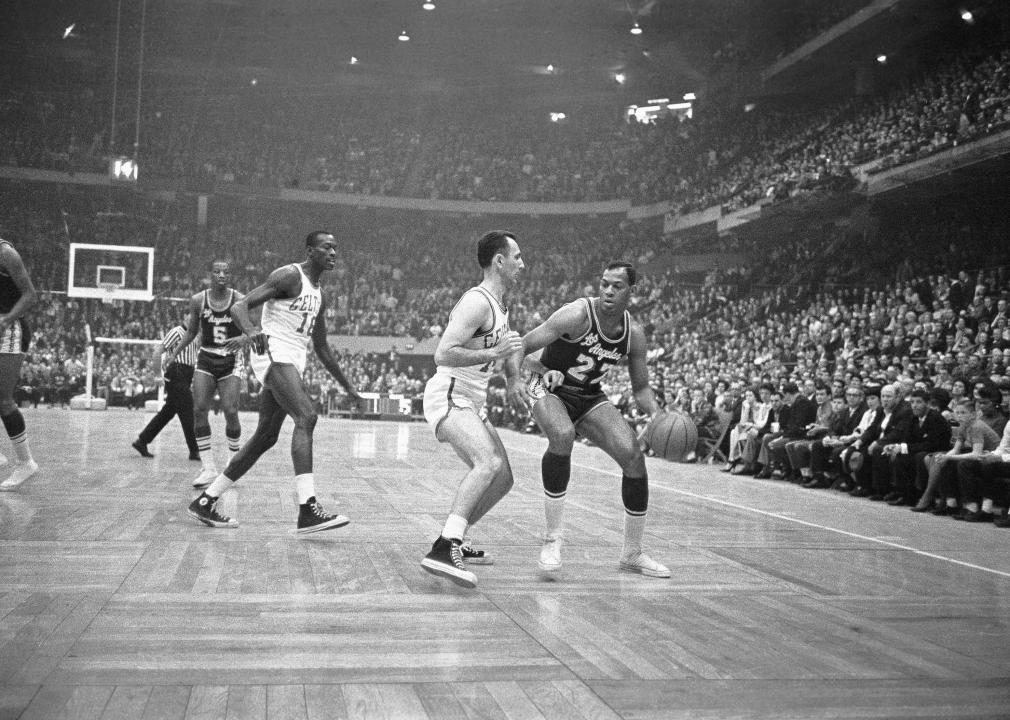 Elgin Baylor scored more than 40 points four times in the NBA Finals. He first hit the mark with 61 points in a Game 5 win over the Boston Celtics in 1962. Baylor added another 41 points in the 110-107 Game 7 loss that cost the Lakers the title. He finished within a shot of 40 points in Games 3 and 4, scoring 39 and 38 points in each game, respectively.

Baylor registered 43 points and 20 rebounds in an NBA Finals Game 5 versus the Celtics the next season. The Lakers, however, also lost that series.

In 1966, the Lakers’ Hall of Fame forward scored more than 40 versus the Celtics in the Finals again. This time Baylor registered 41 points and 16 rebounds in a Game 5 win. The Celtics would win that series by two points in Game 7. Baylor led the Lakers to the finals eight times, but never won an NBA Championship. 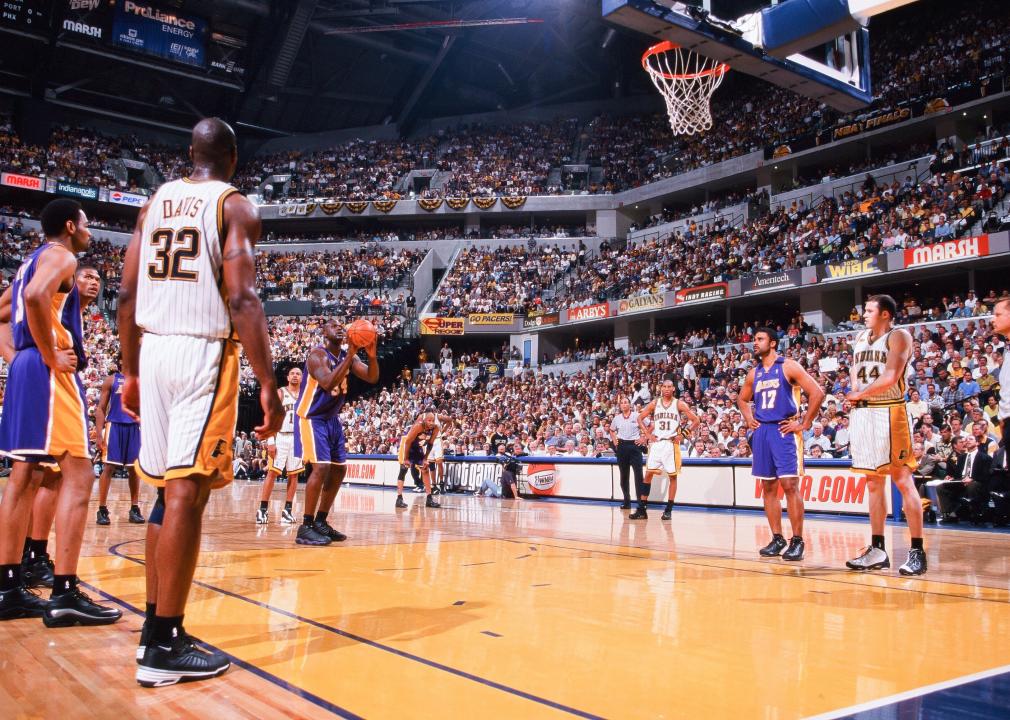 Shaquille O’Neal dominated the 2000 NBA Finals with more than 40 points three times in six games. O’Neal finished Game 1 with 43 points and 19 rebounds in a win over the Indiana Pacers. Shaq then added 40 points and 24 rebounds in the following win. O’Neal helped close out the series with 41 points and 12 rebounds in the 116-111 Game 6 win that sealed his first NBA Championship.

O’Neal added another 40-point NBA Finals outing versus the Philadelphia 76ers the next season. The Lakers lost that Game 1 in overtime as Allen Iverson also scored more than 40 points. However, the Lakers would win the series in five games. O’Neal won his second-consecutive title and NBA Finals MVP.

Los Angeles won their third consecutive title by sweeping the New Jersey Nets in the NBA Finals. O’Neal added 40 points, 12 rebounds, and 8 assists in Game 2 versus the Nets. The Lakers center won finals MVP for the third time. 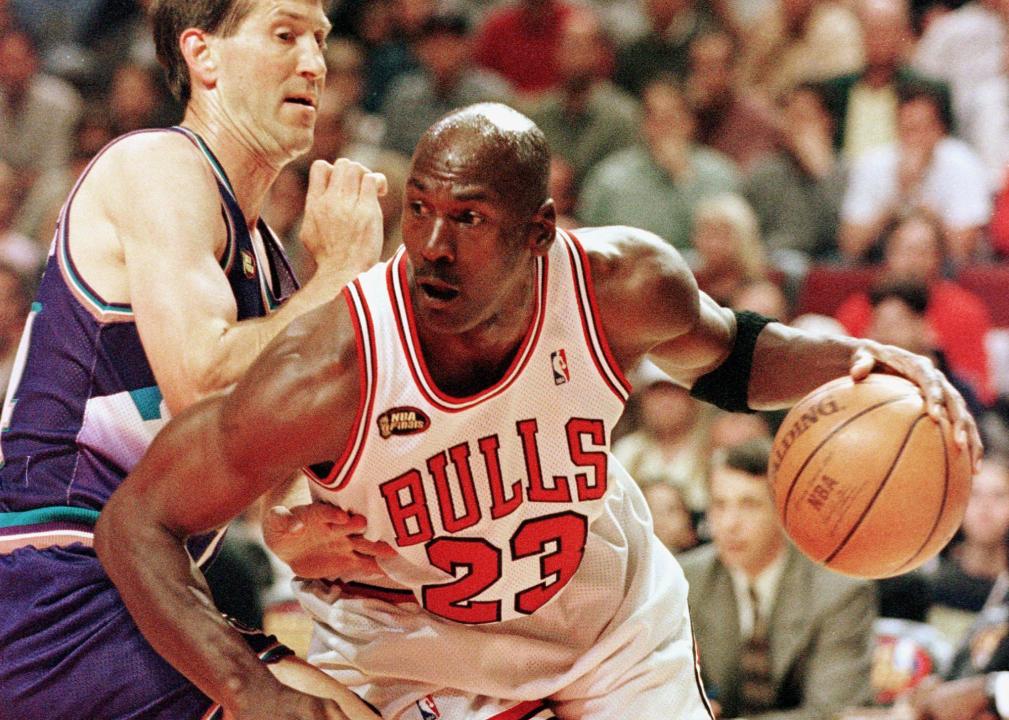 Guard Michael Jordan scored more than 40 points six times with the Chicago Bulls. Jordan scored 39 points in the Bulls first two games versus the Portland Trail Blazers in the 1992 finals. In Game 5, Jordan dropped 46 points versus the Blazers. His Bulls bested Portland in six games, and Jordan won his second finals MVP title.

The Bulls won the finals next year. Jordan also repeated as the finals MVP. The Hall of Famer scored more than 40 points four times versus the Phoenix Suns in the 1993 finals. He and Suns forward Charles Barkley tied for a game-high 42 points in Game 2. Jordan finished Game 3 with 44 points and Game 5 with 41 points, both of which were Bulls losses. His 55 points in Game 4 did help the Bulls secure their only home win in that series. Chicago won in six games.

Jordan’s last 40-point outing in the NBA Finals came in a one-point Game 6 clinching-win over the Utah Jazz in 1998. Jordan secured his sixth NBA Championship and finals MVP. 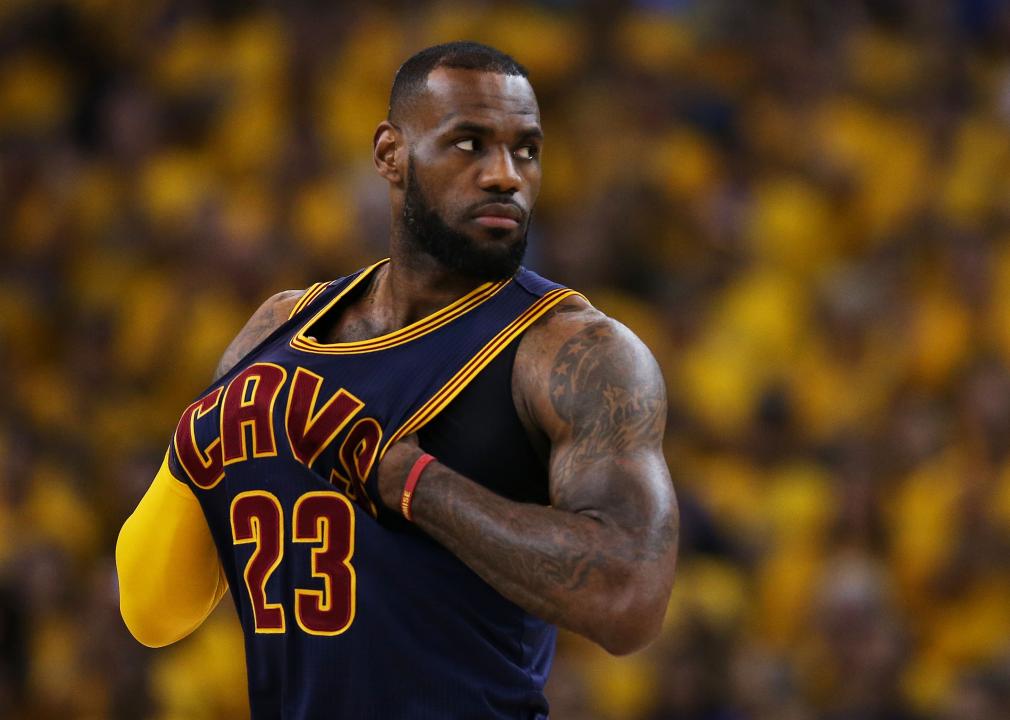 LeBron James went to the NBA Finals a few times and won two NBA Championships before he scored more than 40 points in a single game in the finals. James first scored 44 points in Game 1 of the 2015 NBA Finals versus the Golden State Warriors. He scored 39 in the next game and 40 points in Game 3 to help his team go up 2-1 in the series. James scored 40 again in Game 5, but the Warriors ended up winning the series in six games.

The Cavs and James would come back and beat the Warriors in seven games the next season. James scored over 40 twice in that series. Teammate Kyrie Irving and James tied for a game-high 41 points in a winning Game 5 effort. James registered 41 in the Cavs next Game 6 win. The Cavaliers came back from a 3-1 deficit and delivered Cleveland’s first NBA Championship ever.

Golden State and Cleveland also faced off in the next two NBA Finals. James dropped 41 in Game 5 of the 2017 NBA Finals. He also scored 39 points in Game 3, but his Cavs got eliminated by the Warriors in five games. James scored 51 in the Game 1 loss during the 2018 finals. Cleveland failed to win a single game in that series.

James made the finals again in 2020, a year after joining the Lakers via free agency. This time he registered 40 points and 13 rebounds in Game 5 loss to the Miami Heat. The Lakers still went on to cap-off the season interrupted by COVID-19 postponements by winning the NBA Championship. It was LeBron’s fourth NBA Championship and finals MVP award. 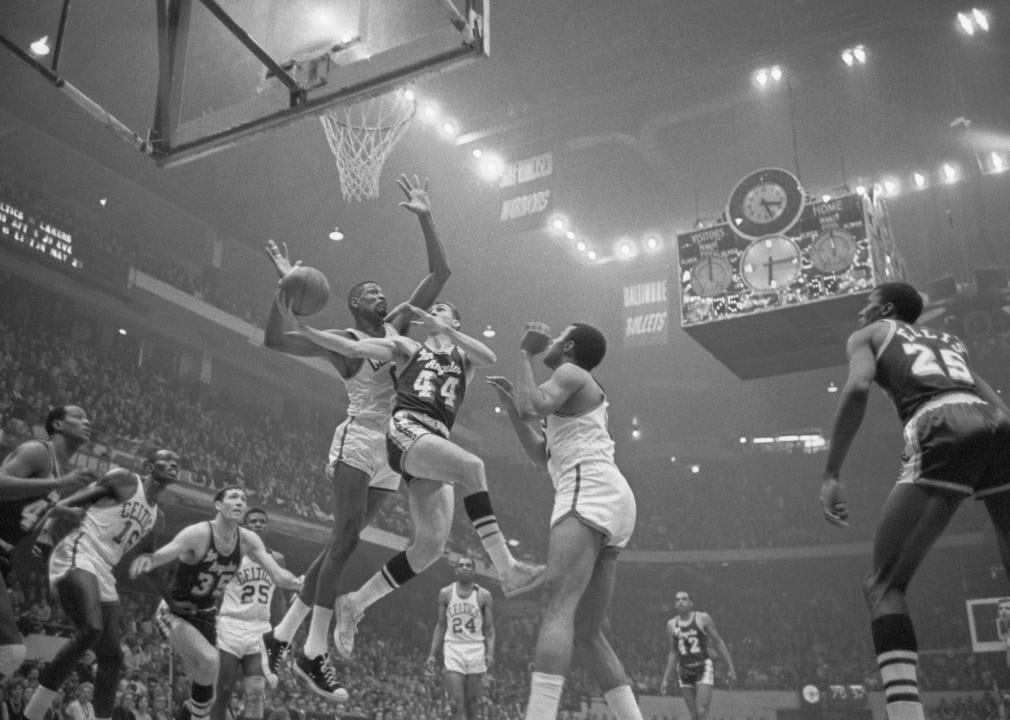 Jerry West only won one title in his NBA playing career, but he scored more than 40 points in the NBA Finals 10 times. The Lakers guard first scored 40 points in a Game 2 win over the Boston Celtics in 1962. LA lost that series in seven games. West did it again with 42 points in a Game 3 win over the Celtics the next season. However, he and Elgin Baylor lost to the Celtics in six games.

You may also like: 30 famous athletes who received lifetime bans 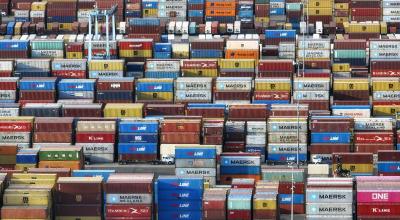