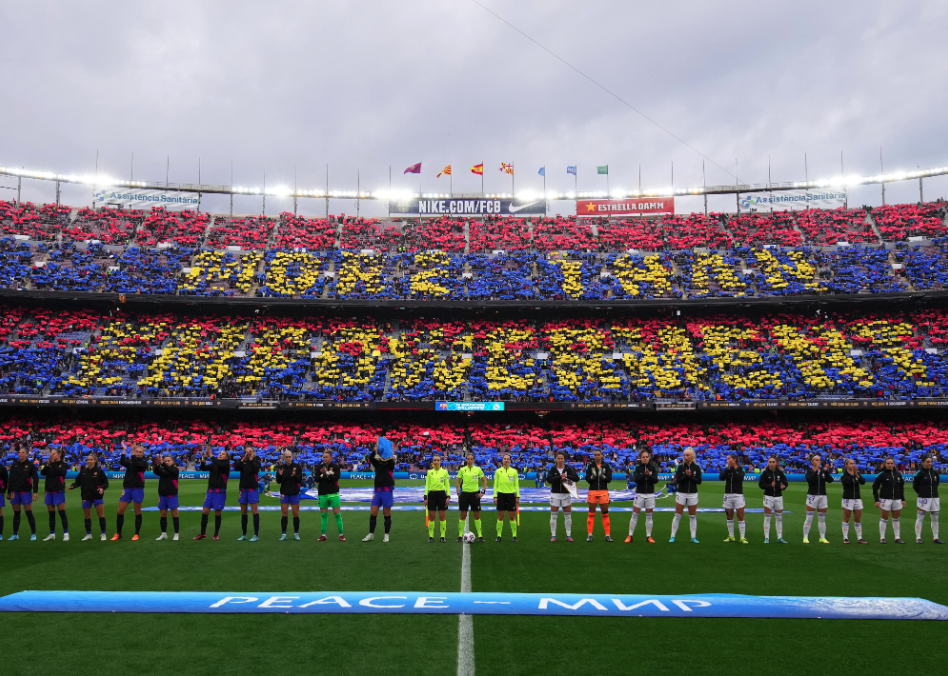 For decades, the world’s most popular team sport—soccer—focused on male players while women fought for the right to play in big tournaments. While men’s soccer has been in the Olympics since 1900, women didn’t get the chance to kick for gold until 1996. Likewise, the World Cup started its men’s edition in 1930, while a women’s edition didn’t come about until 1991 even though women’s teams have played internationally for 20 years.

While the perception that women’s soccer doesn’t draw any spectators dies hard, the women’s game has grown in popularity, and even rivals the attendance of men’s games.

Stacker researched 10 of the most highly attended women’s soccer matches in history, pulling data from numerous sources including FB-Reference, the Rec.Sport.Soccer Statistics Foundation, and the Associated Press.

The forthcoming list only includes official attendance totals, which disqualifies the 1971 World Cup in Mexico. Several matches at that tournament possibly posted lofty attendance figures, including the final where an estimated 110,000 watched Denmark beat Mexico 3-0 at Azteca. However, those matches were excluded from this list because their attendance totals are estimates. 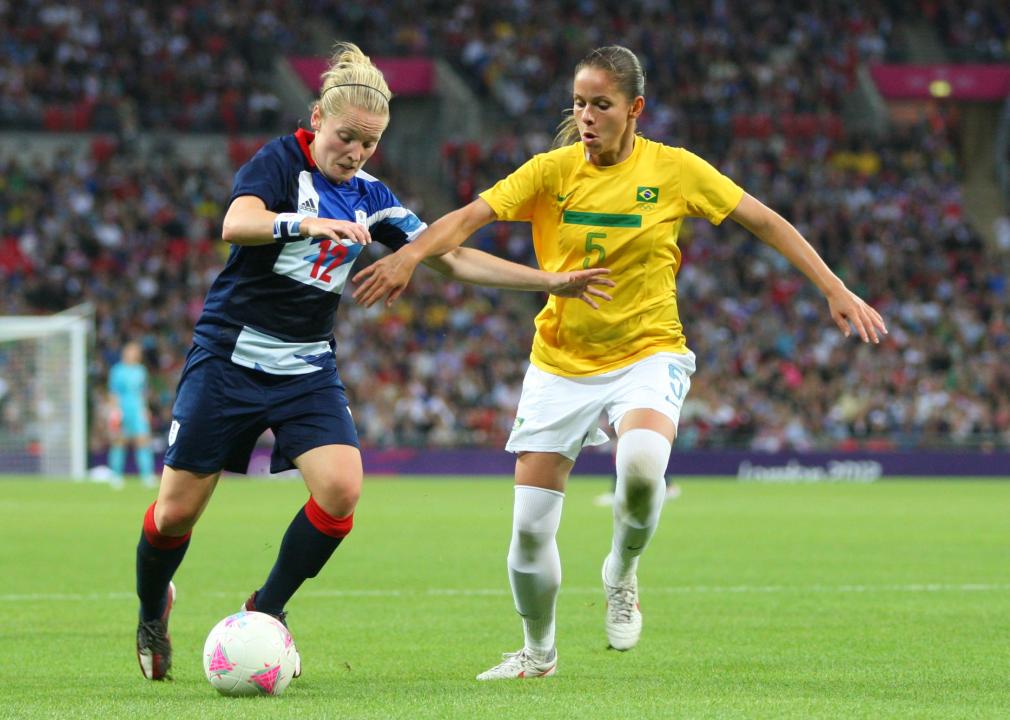 The last match of group play at the 2012 Olympics pitted the host nation against Brazil, which at the time was ranked fourth in the world. Steph Houghton scored the game’s lone goal two minutes into play and set the London home crowd roaring.

Brazil tried to make a comeback, but instead racked up three yellow cards as they attempted to maintain possession of the ball and make shots.

Team GB’s win pushed them to the top of group play, ensuring them a place in the quarterfinals. There they faced Canada, but lost to the eventual bronze medalists. 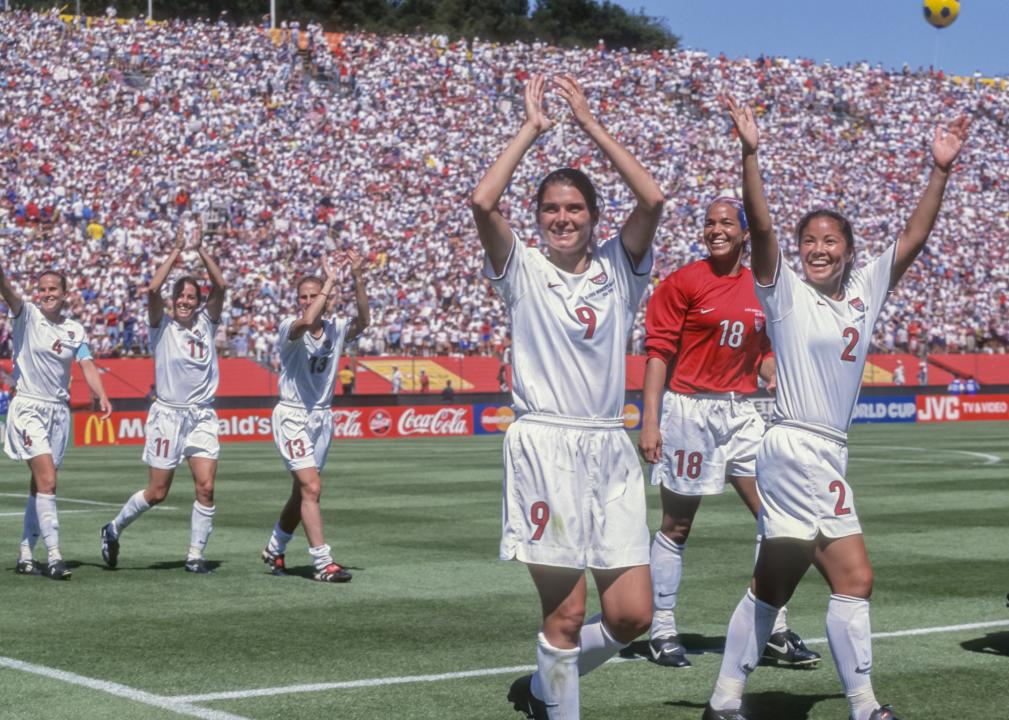 The U.S. Women’s National Team provided some Independence Day fireworks in their semifinal victory against Brazil. Both teams were tired by this point in the World Cup, having each played a quarterfinal match on the East Coast just three days prior.

Cindy Parlow Cone got the U.S. to an early lead in the fifth minute, but Brazil couldn’t answer. Michelle Akers, who was the MVP of the 1991 World Cup, landed a penalty kick in the net in the 80th minute to seal a trip to the finals for the U.S. 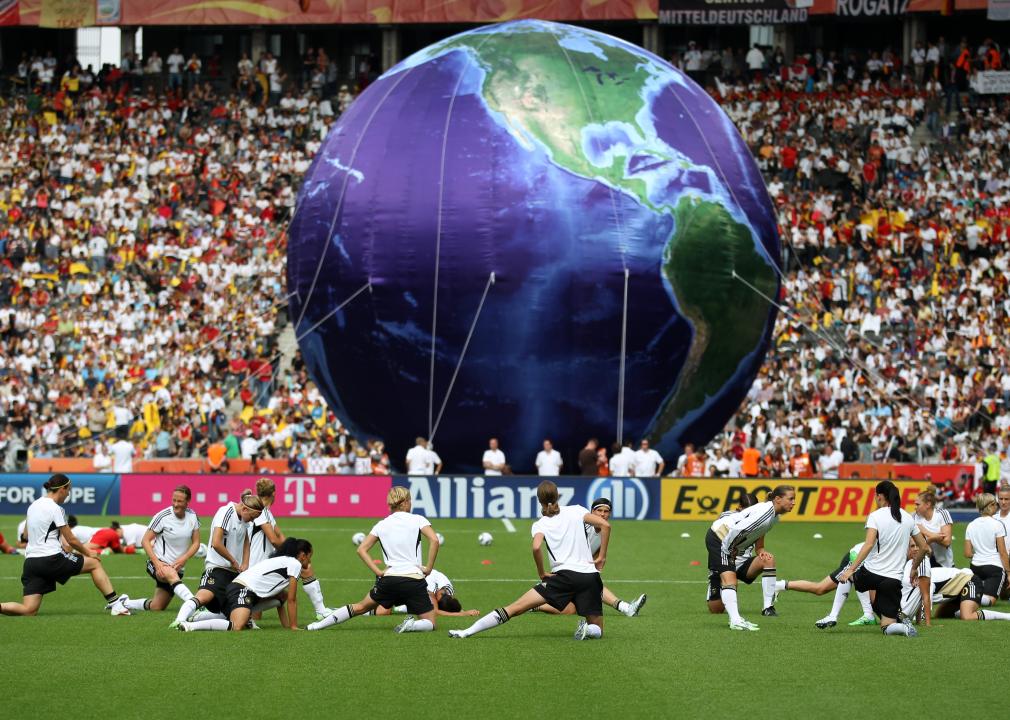 At the time, both Germany and FIFA were taking heat for their handling of women’s soccer. A German poll had just shown that more than half of respondents couldn’t name a single player on the women’s team. FIFA’s tournament slogan, “The beautiful side of 2011,” was criticized for focusing on female players’ looks rather than talent. Still, the German team’s opening match played to a sold-out crowd.

The team did not disappoint, scoring two goals against Canada in the first half. Canada provided a scare in the 82nd minute with a goal of its own, but Germany held on to win the game. Although Germany won its group, it lost in the quarterfinals to tournament winner Japan. 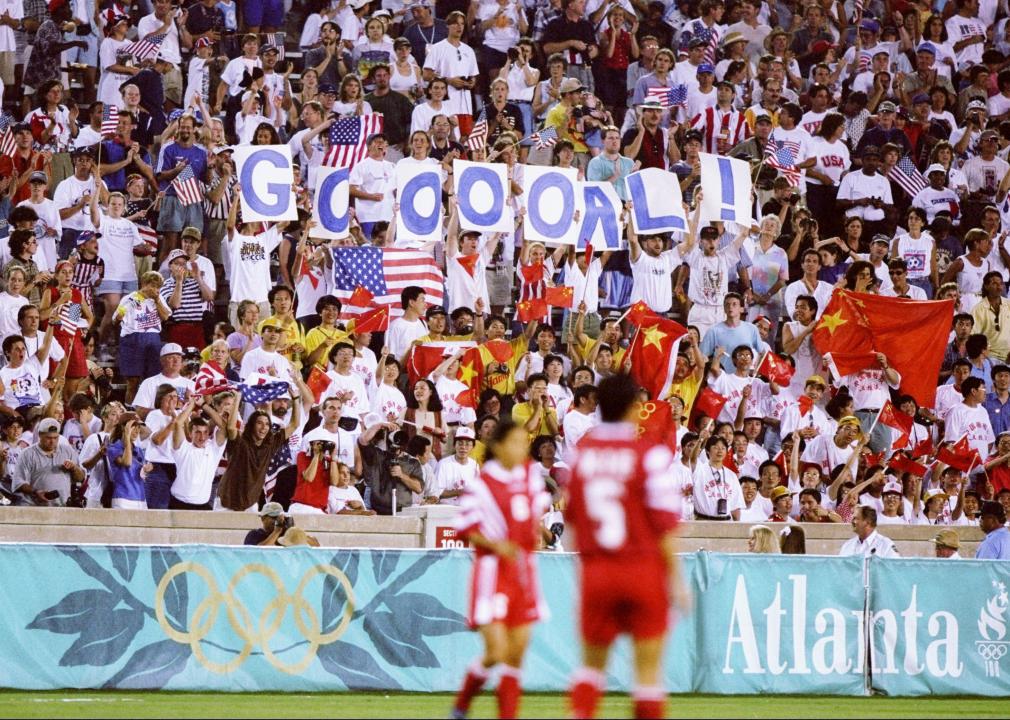 At Atlanta 1996, women competed in soccer for the first time in Olympic history. China and the U.S. played in the same group for the preliminary round, and both advanced to the semifinals with a record of two wins and one loss—though China had a better goal differential.

Both teams had tough games to get to the finals: China narrowly beat Brazil, and the U.S. beat defending world champion Norway.

In the final, the U.S. struck first when Shannon MacMillan scored in the 19th minute. China tied it up later in the first half on a goal by Sun Wen. Midway through the second half, Tiffeny Milbrett scored America’s second—and winning—goal in front of what was at the time, the largest audience in women’s soccer history. 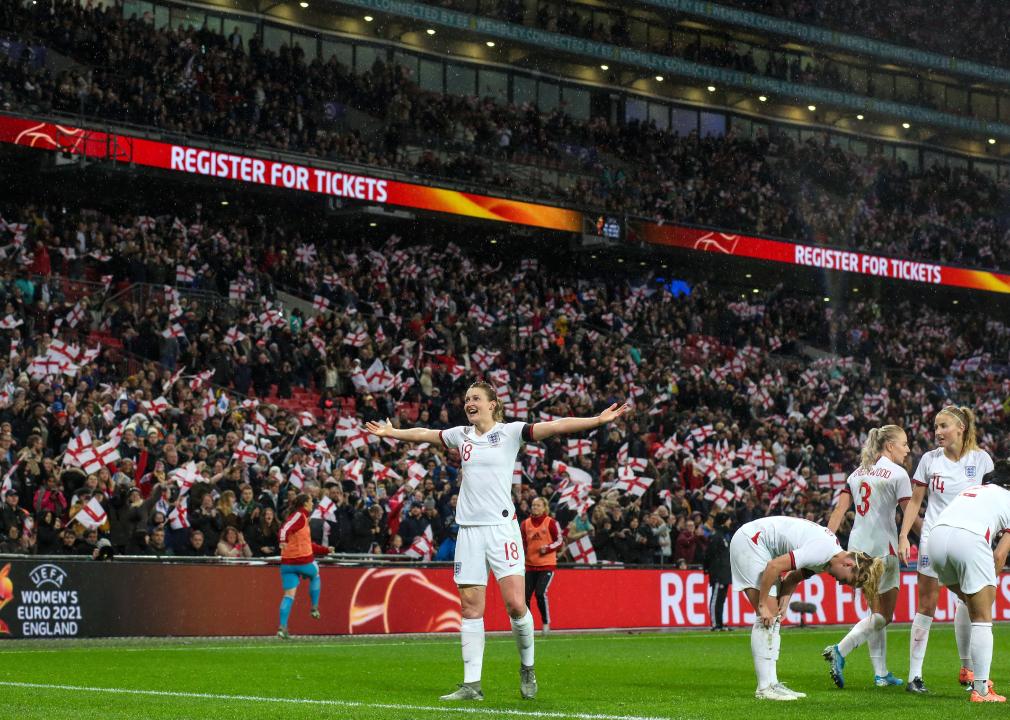 Earlier in the year, England had taken fourth place in the World Cup—a performance that galvanized fans to come out and cheer them on in this sold-out friendly. Rainy weather kept some fans away, but the actual attendance shattered England’s previous at-home record of 45,619.

Unfortunately for the home team, Germany got an early lead with a header by Alexandra Popp in the 8th minute. England missed a chance to equalize on a blocked penalty kick in the 36th minute but Ellen White did score to tie it up before halftime. The game almost went to a draw, but Klara Buhl kicked the winning goal in the 90th minute. 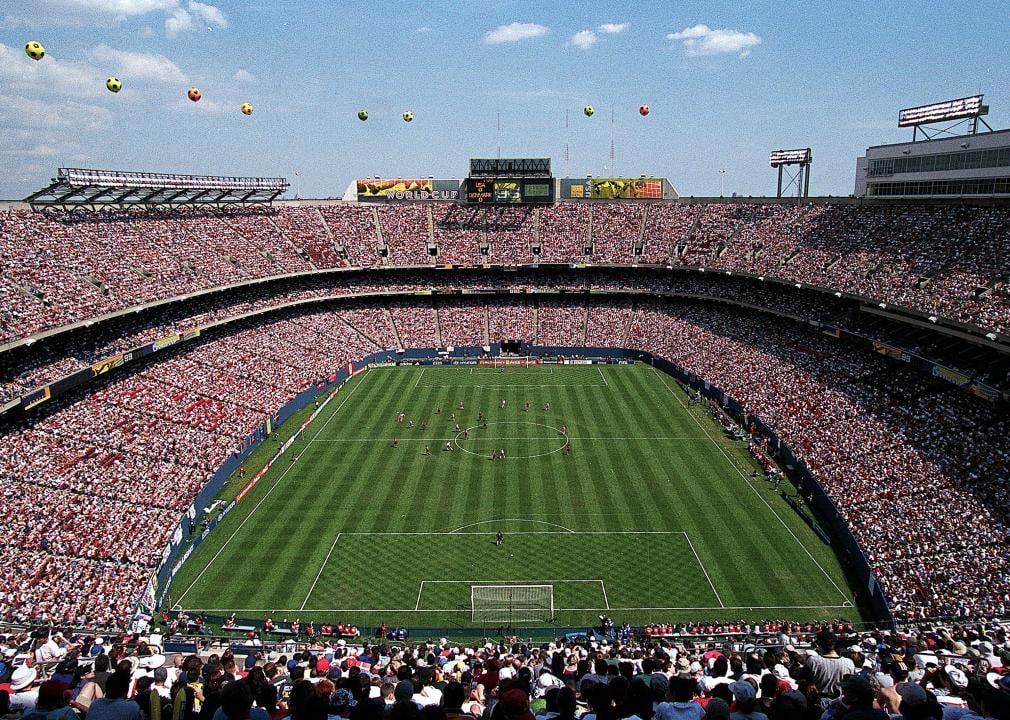 Fans packed Giants Stadium for the opening match of the 1999 World Cup, which was hosted by the United States for the first time. It was also the first time the women’s tournament was held in major stadiums, which led to all kinds of new attendance records for the sport. This game alone broke an attendance world record for a women’s sporting event, a record that would be broken by the finals.

Veterans Mia Hamm, Julie Foudy, and Kristine Lilly scored for the U.S. All three had also played on the victorious 1996 Olympic team and the 1991 World Cup-winning team. 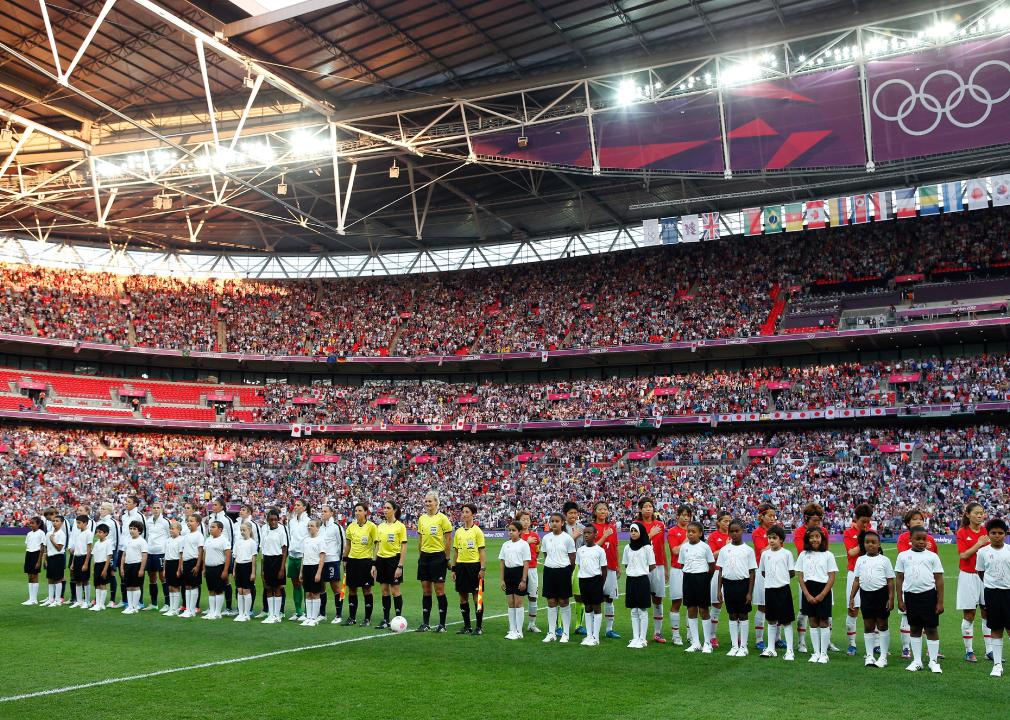 Wembley Stadium was packed for the women’s gold medal match at London 2012, setting a record for the highest attendance at a women’s Olympic soccer match. The match pitted the United States against Japan, a rematch of the 2011 World Cup final, which Japan had won.

This time the U.S. came out on top. Carli Lloyd scored both goals for the U.S., with her first goal being the only goal of the first half. She scored again in the second half before Japan could score once.

Although Japan had more ball possession time, they couldn’t put together a drive to equalize the game. The U.S. claimed victory, its fourth gold medal in five Olympics. 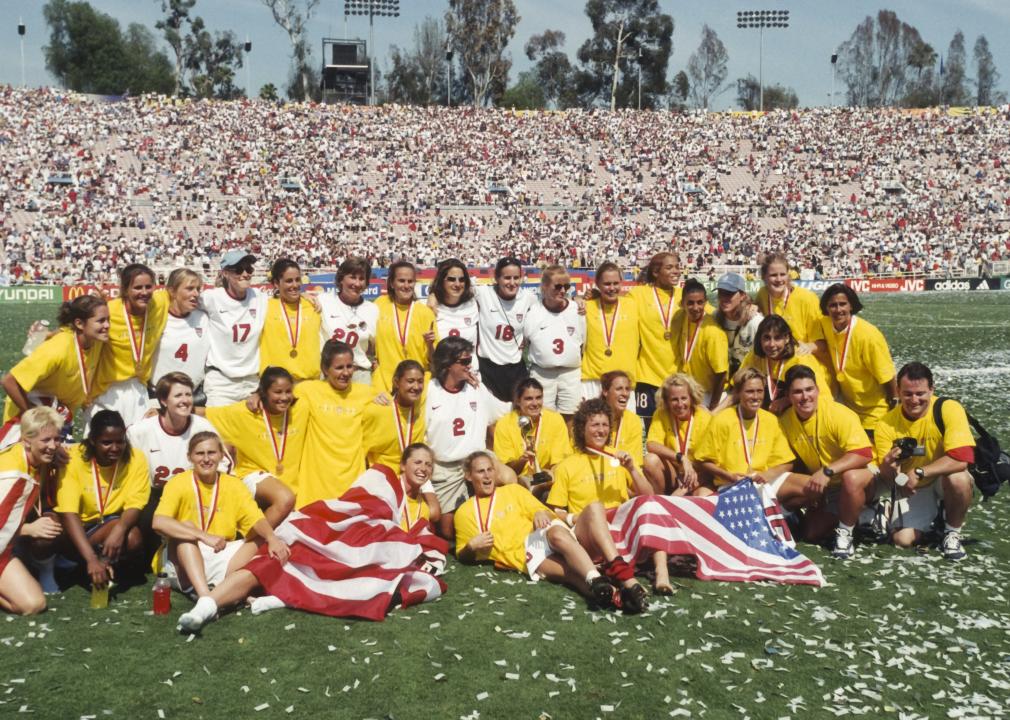 This game provided one of the all-time epic moments in women’s soccer history—and it took 120 minutes to get there.

The U.S. and China played in the second half of a doubleheader for the World Cup title, going scoreless through both regulation and sudden-death overtime. Penalty kicks decided the outcome, and China scored the first blow. The U.S. answered, and each team scored again.

Then U.S. goalie Briana Scurry blocked Liu Ying’s attempt, leaving the door open for the U.S. Kristine Lilly and Mia Hamm made their shots, but so did Zhang Ouying and Sun Wen, leaving it up to Brandi Chastain.

Chastain hit a left-footed shot that got past goalkeeper Gao Hong; in her exuberance, Chastain ripped off her shirt and slid on her knees in just her sports bra and shorts. Photos of her celebration were beamed around the globe, capping off a defining tournament for women’s soccer. 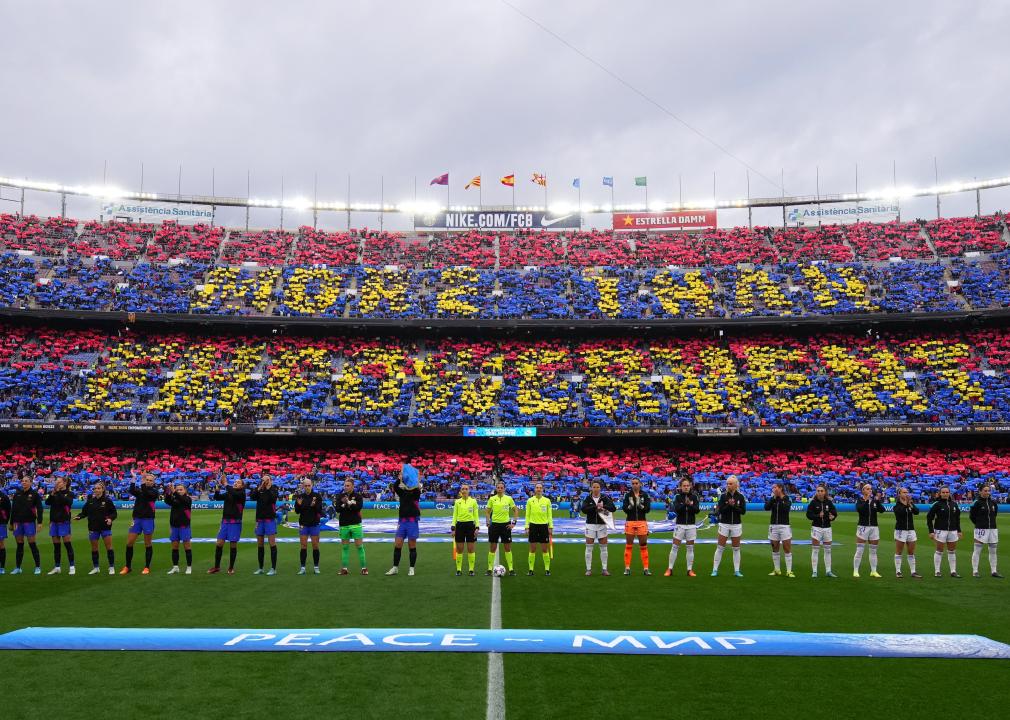 Breaking a nearly nine-year-old world record, the size of the crowd at this match made women’s players around the world emotional with how far the sport had come. While it didn’t beat the world record by much, it smashed the club game attendance record by 30,794.

Barcelona certainly gave a performance to cheer about, even though victory wasn’t assured. Madrid tied the game at one-all on a penalty kick before halftime and went ahead 2-1 early in the second half. Then Barcelona upped its game and scored three unanswered points to earn their spot in the semifinals. 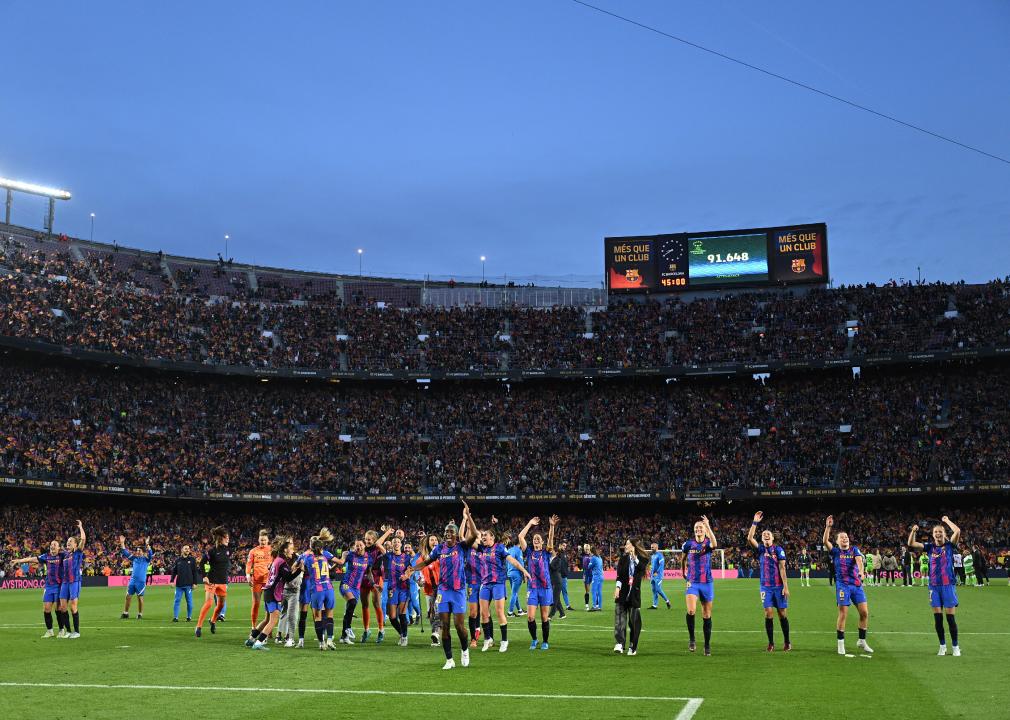 Less than a month after setting an attendance world record, Barcelona broke it again during its quest to repeat as UEFA Champions. This game was also the best-attended match of the season for either women’s or men’s play.

The raucous crowd cheered Barcelona on to its first-ever win over Wolfsburg. Their offense stunned Wolfsburg’s defense, scoring four unanswered goals by four different players in the first half alone. Wolfsburg rallied with a goal in the 72nd minute, but it was too late. Barcelona added its fifth goal in the 84th minute, a few minutes before the official attendance totals were announced.

You may also like: Famous baseball players from every state