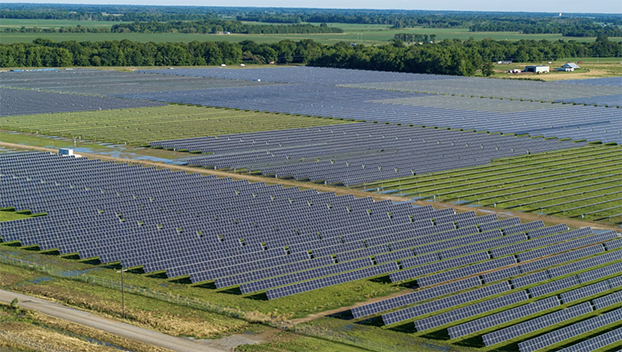 Entergy Mississippi announced Thursday the completion of the Sunflower Solar Station project, which is now the largest renewable energy plant in Mississippi.

The Sunflower County facility, which sits on 1,000 acres in Ruleville, is slated to come online by mid-July. The plant has a 100-megawatt capacity, about twice as much as any active renewable facility in the state.

The new solar project also represents a 50% increase in Mississippi’s overall renewable energy capacity among its power companies. Prior to the Sunflower plant’s completion, the state as a whole had about 220 megawatts of renewable capacity from eight different facilities, according to data from the Public Service Commission.

The Sunflower Solar Station in Ruleville, Miss., which sells power to Entergy. Credit: Entergy Mississippi
The project is the first part of Entergy Mississippi’s recently announced initiative to replace some of its natural gas plants with renewable sources. The company’s aim is to reach 1,100 megawatts of renewable capacity, or 30% of the power it produces, by 2027. Entergy is the biggest power provider in the state with 461,000 customers.

That initiative is a significant commitment in the state’s clean energy transition, which Mississippi has left largely to utilities and market forces to decide rather than policy around emissions, as Mississippi Today reported in February. Just about 2% of the state’s generated electricity comes from renewables, compared to 20% for the United States as a whole.

The now low cost of producing solar power, as well as companies looking to incorporate renewables into their operation, are key drivers in Mississippi’s transition.

“There’s one evolution in economic development that we’re seeing, and it’s a demand for renewable energy,” Laura Hipp, Deputy Director of the Mississippi Development Authority, said at the announcement Thursday. “Almost half of the requests that come in for new projects, they’re looking for part or all electricity from renewable sources. Whether they’re headquartered here or out of state, they’re asking about renewable energy.”