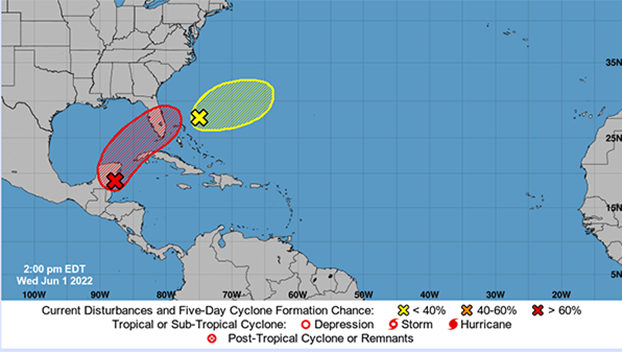 The National Hurricane Center reports that a tropical disturbance in the Gulf of Mexico has a good chance of developing into the first named tropical storm of the 2022 hurricane season.

The system does not appear to be a threat to Mississippi.

The tropical system is forecast to develop in an area between the Yucatan Peninsula and Cuba.

The storms are remnants of the Pacific Hurricane Agatha. If the group of storms redevelops into a tropical storm it will have the new name Alex — the first named storm in the Atlantic Basin.

Despite strong upper-level winds, gradual development is forecast and this system is likely to become a tropical depression while it moves slowly northeastward over the
northwestern Caribbean Sea and southeastern Gulf of Mexico during the next day or two.

The National Hurricane Center models suggest the system will likely become a Tropical Depression by Friday. Strong north winds over the north gulf will protect the Louisiana and Mississippi Gulf Coast and help steer the potential storm eastward.

Locally heavy rainfall is likely across portions of the Yucatan Peninsula during the next day or so, spreading across western Cuba, South Florida, and the Florida Keys on Friday and Saturday.

Another disturbance off the of the Atlantic Coast has a 10% chance of tropical development and will not affect Mississippi and the Gulf Coast.