18-year-old Mississippi man charged in accident that killed two people. He was reportedly driving under influence of alcohol. 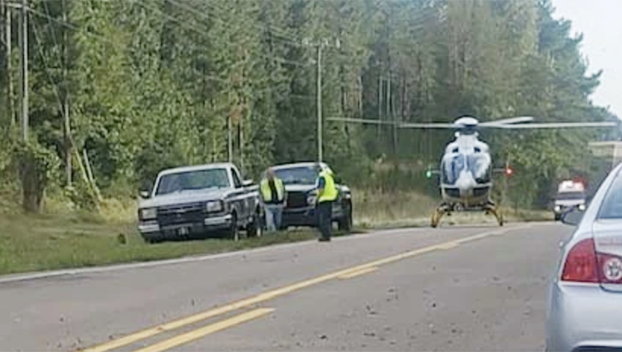 The Prentiss Headlight—Rescue 9 landed on Hwy 13 North Oct. 9, 2021, in response to a two-car collision at West Whitesand Road and Hwy 13.

An 18-year-old Mississippi man has been charged with felony aggravated DUI after he reportedly ran a stop sign while driving under the influence of alcohol causing a crash that killed two people.

Austin Robert Watts, 18, of Monticello was indicted and charged with two counts of felony aggravated DUI and released on a $30,000 bond set by Judge Prentiss Harrell. According to District Attorney Hal Kittrell, Watts will be tried as an adult in circuit court.

First responders were called to Highway 13 North and West Whitesand Road at approximately 3:20 p.m. Oct. 9, 2021, after receiving reports of a two-vehicle accident. Officers found a red 2006 Pontiac G5 and a 2010 Chevrolet Silverado truck at the scene. Suzette Pittman, 40, driver of the Pontiac, and passenger Laderick Anderson, 43, were both declared dead at the scene by Jefferson Davis County Coroner Dedra Johnson. Pittman and Anderson were traveling south toward Prentiss when a collision occurred as the truck was crossing from Whitesand Church Road to West Whitesand Road. Both vehicles ended up on the southbound shoulder just at the entrance of West Whitesand Road. Watts was driving the Silverado with one passenger also in the vehicle.

The multi-count indictment states that Watts had a blood alcohol content of 0.031% and did “thereby in a negligent manner cause the death of Suzette Y. Pittman Anderson and Laderick Darnell Anderson by running a stop sign causing a vehicle collision.”

Mississippi’s Zero Tolerance Law declares that it is unlawful for a person to drive or otherwise operate a vehicle if the person has an alcohol concentration of 0.02% or more for a person who is below the legal age to purchase alcoholic beverages under state law.

A trial date for Nov. 1 has been set.