Man charged with murder, shooting up occupied house extradited back to Mississippi to face judge today 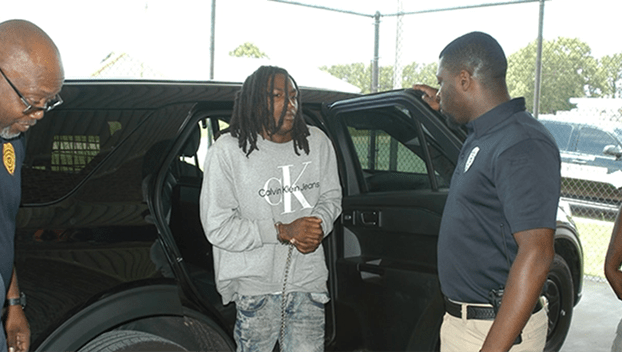 A man charged with murder and aggravated assault in separate incidents was extradited to the Wilkinson County Jail on Thursday, Woodville Police Chief Lemuel Rutledge said.

He was captured in New Orleans after eluding multiple law enforcement agencies in a manhunt following the Woodville shooting incident.

Natchez police and Adams County Sheriff’s Office assisted other agencies in the day-long search for Carr, during which he reportedly exchanged gunfire with officers.

Carr was a wanted suspect in the May 5 shooting and killing of Gerrit Decody, 31, at the Pinetree Manor apartments in Centreville. Centreville police reportedly searched several locations in Woodville in the days that followed and could not find him.

Then on May 10, police responded to shots fired at a house on First West Street in Woodville, where they found a woman who had been shot in her hip.

The woman was airlifted to Our Lady of the Lake Hospital in Baton Rouge, where she was treated and released later that day. She also had a one-year-old and a kindergarten-age child with her in the home and neither was injured.

“Every last one of them is going to be charged when we find out who they are,” he said.

Officers were able to obtain video footage of Carr fleeing, taken from a Woodville resident’s security cameras, he said.

“The Centreville Police Department charged several women with aiding him after the murder that occurred in Centreville but we have not found out who helped him to avoid capture in Woodville,” Rutledge said Sunday.

This man broke into Mississippi store and stole cash…