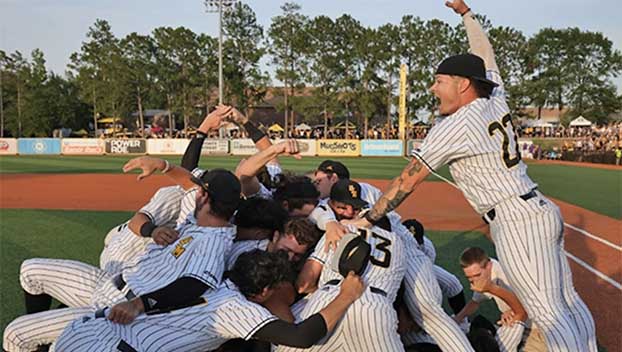 Southern Miss baseball players celebrate after beating LSU 8-7 on Monday to win the NCAA Tournament's Hattiesburg Regional. Southern Miss advanced to the super regional round, where it will face in-state rival Ole Miss for a trip to the College World Series. (Joe Harper/BGNPhoto.com/Southern Miss Athletics)

Gabe Montenegro had three hits and three RBIs, Danny Lynch added a go-ahead RBI in the ninth and No. 11 overall seed Southern Miss beat LSU 8-7 on Monday night to win the Hattiesburg Regional.

Southern Miss (47-17) advances to its first super regional since 2009 and will face the University of Mississippi after the Rebels beat Arizona in the Coral Gables Regionals.

Montenegro hit a two-run single in the seventh to extend Southern Miss’ lead to 7-4 after a four-run inning. LSU answered with two runs in the bottom half on RBI singles from Tre’ Morgan and Jordan Thompson.

The leadoff batter for Southern Miss reached in seven of the nine innings, including Christopher Sargent in the ninth before he scored on Lynch’s sacrifice fly. Sargent and Lynch each had three hits apiece.

Tyler Stuart picked up his fourth win of the season after 1 1/3 scoreless innings.

LSU (40-22) used seven pitchers with Eric Reyzelman picking up his third loss. The Tigers’ Gavin Dugas hit a game-tying home run, his fifth of the season, to make it 7-7 in the eighth.

Mississippi (35-22) won a regional on the road for the first time in program history to advance to play Southern Miss in the super regionals.

After Arizona tied it at 5 on a two-run shot by Blake Paugh in the fourth, Ole Miss scored five runs in the fifth and eight in the sixth to win going away.

Kemp Alderman broke it open with a grand slam, his 10th home run of the season, to make it 10-5. Elko homered in the first, third and seventh to set a program record for home runs (22) in a single season.

Elko went 4-for-4 with five RBIs and a career-high six runs scored. Alderman also had five RBIs and Chatagnier drove in 10 runs in the three-game regional.

Paugh finished with three RBIs for Arizona (39-25). Daniel Susac became the 10th player in program history with a 100-hit season.