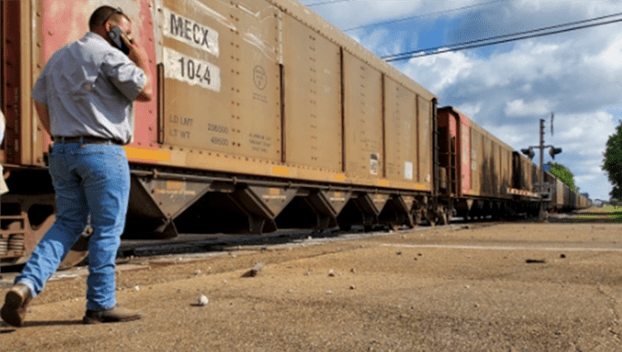 A derailed freight train is creating headaches for a Mississippi town that has been literally cut in half as crews work to get the train back on track.

Officials say a freight train came off the tracks “a bit” in Brookhaven a little after 8 a.m. and the train remains there for now.

If you’re trying to get from the east side of Brookhaven to the west today — or vice versa — you might want to factor in a little extra time, officials counseled.

Portions of the track came apart in the crossing of Monticello Street, causing the train to have to stop until the damage can be fully assessed.

Police Chief Kenneth Collins said people should expect the tracks to be blocked for quite a while.

Emergency personnel at the site speculated the freight cars at the crossing would have to be unloaded and removed from the area to avoid further damage and a possibly more dangerous situation. Only then could the remainder of the train move out of the area, and the damaged sections be repaired or replaced.

Alternate routes across the tracks include Hwy. 84 and Dale Trail south of downtown, and Industrial Park Road on the north side of downtown.

As always, once the tracks clear, use caution and obey the crossing warnings.