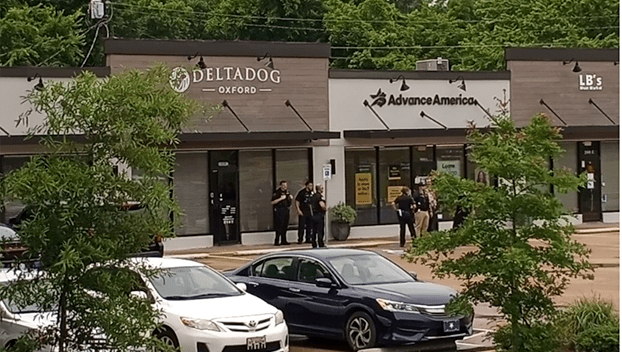 Police say two persons of interest are in custody after a shooting in the rear parking lot of a group of Oxford shops.

Oxford Police say one of the persons has developed into an official suspect and formal charges are forthcoming.

Early Wednesday afternoon, the OPD reported a large police presence in the area of businesses such as Oxford Animal Care Center, Delta Dog, Advance America, and LB’s Meat Market after a person was reportedly shot.

OPD officials said a victim had indeed been shot in the rear parking lot of businesses in the 2000 block of University Avenue, but the injury was non-life-threatening.

The owner of Delta Dog owner confirmed that the shooting did not take place inside of the establishment.

The police has not officially identified a suspect in the shooting at this time, but local authorities currently have two persons of interest in custody.

OPD, OPD’s K-9 unit, the Lafayette County Sheriff’s Department and the University Police Department’s K-9 unit are currently on the scene and have blocked off access to businesses in the area as the investigation continues.

Leaders in this Mississippi city back off recent ordinance…