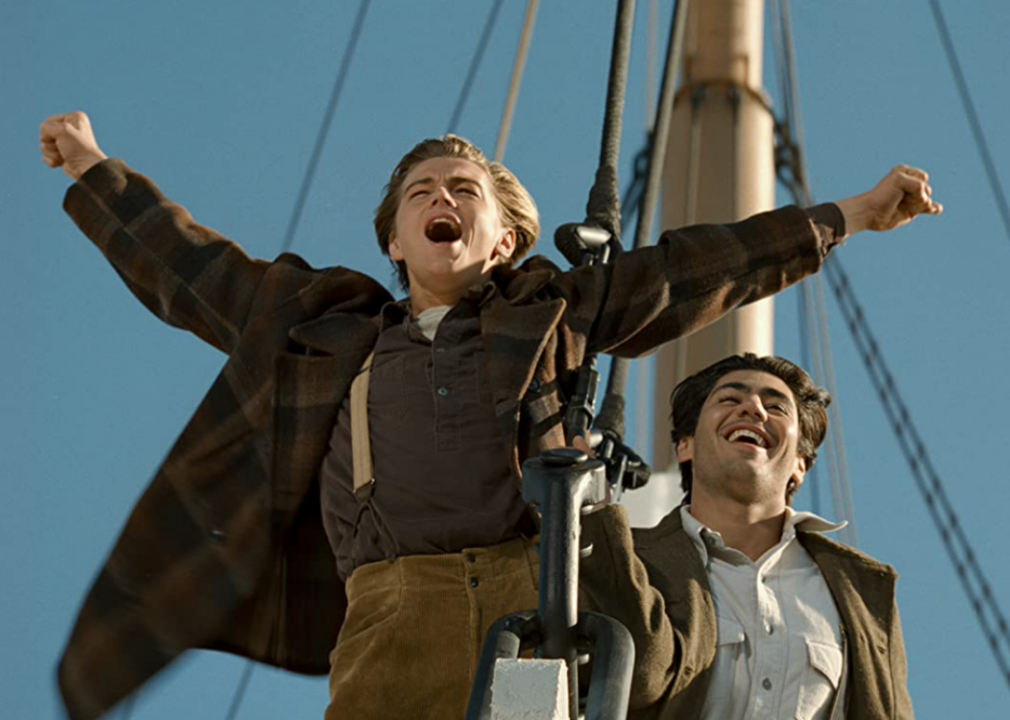 Hollywood has always had a penchant for retelling history, romanticizing true events, and subtly shaping the narrative into something we can learn from or long for. One of the earliest full-length films, “Birth of a Nation,” does just that.

Filmed in 1915, the movie begins with the end of the Civil War and the assassination of Abraham Lincoln—an event that took place some 50 years before the film’s release in the 1910s—then spins off into a fantasy about how the Ku Klux Klan was a heroic force, essential for preserving “American values.” While not all period films are this harmful or blatantly racist, almost all of them fall into the trap of idealizing periods or events that have long passed.

Idealization, of course, isn’t always a bad thing. Many of us turn to movies for escapism from our day-to-day lives. Coupled with the nostalgia we often feel for the past (even a past we never experienced ourselves), and you have the recipe for the perfect—and profitable—project.

Giggster ranked the 10 highest-grossing period pieces using domestic box office data from The Numbers. For this ranking, period pieces are considered movies set in a historical time period compared to when they were filmed. This ranking also focuses on movies grounded in reality—historical films with fantastical or supernatural elements were generally left out of this ranking. Films are sorted by their domestic inflation-adjusted gross.

You’ll notice that seven of these movies came out within a seven-year span, between 1997 and 2004, solidifying the late 1990s and early 2000s as something of a golden era for period films. Those of us who love a good period drama can only hope the recent surge of successful historical films—with 2019’s “Little Women” and 2021’s “Belfast” and “West Side Story”—indicates that we’re at the dawn of another golden era. 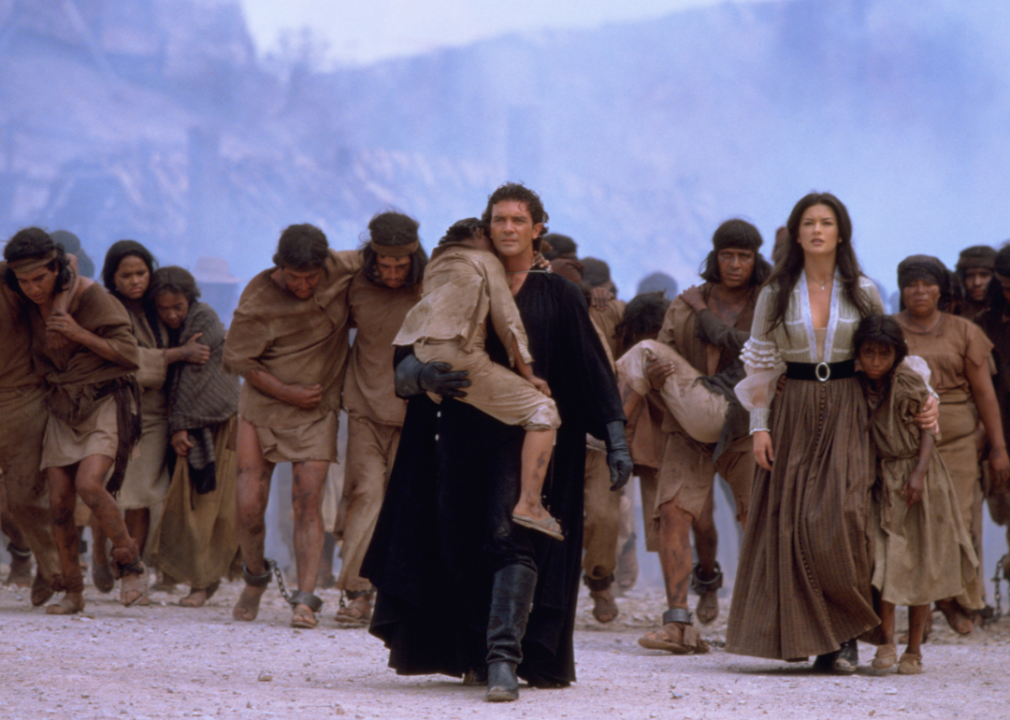 Part swashbuckling adventure, part love story, “The Mask of Zorro” is set in Las Californias (a region of North America that is now California and Mexico) in 1821. It follows the original Zorro, Don Diego de la Vega (Anthony Hopkins), and his successor, Alejandro Murrieta (Antonio Banderas), as they pursue justice against the corrupt regional governor and his right-hand man. Roger Ebert described the movie, which also stars Catherine Zeta-Jones as the love interest, as “a [James] Bond picture on horseback.”

All told, this Zorro tale was a hit, earning $250 million at the box office worldwide and snagging several awards nominations, including multiple Oscars. The costumes, which were all made in Mexico and very period-appropriate, also garnered significant praise from folks in the industry. 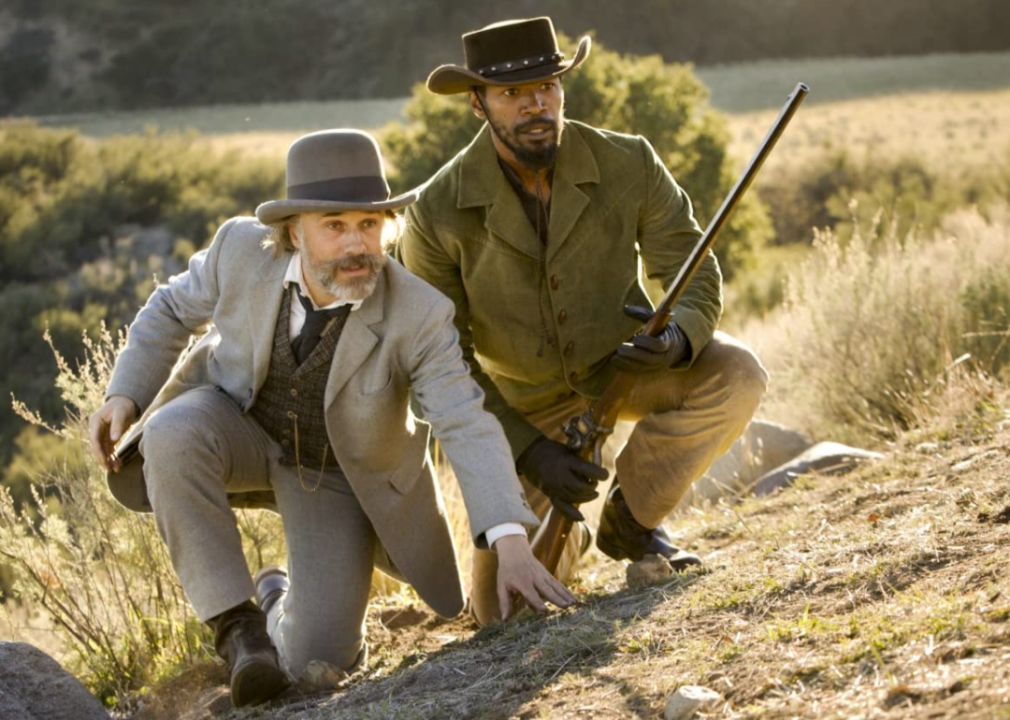 Set in the Wild West and Antebellum South, “Django Unchained” is about an enslaved person who becomes free and agrees to work with a German bounty hunter in order to free his wife from a malevolent enslaver. The film is highly stylized and a direct tribute to the spaghetti Westerns of the 1960s.

Written and directed by Quentin Tarantino, it features an all-star cast including Jamie Foxx, Leonardo DiCaprio, Kerry Washington, Samuel L. Jackson, Don Johnson, and Christoph Waltz. Though it drew considerable criticism for its use of racial slurs, the movie was ultimately wildly successful—drawing in $425 million at the box office worldwide—and cleaned up nicely on the awards circuit, winning an Oscar for Best Original Screenplay. 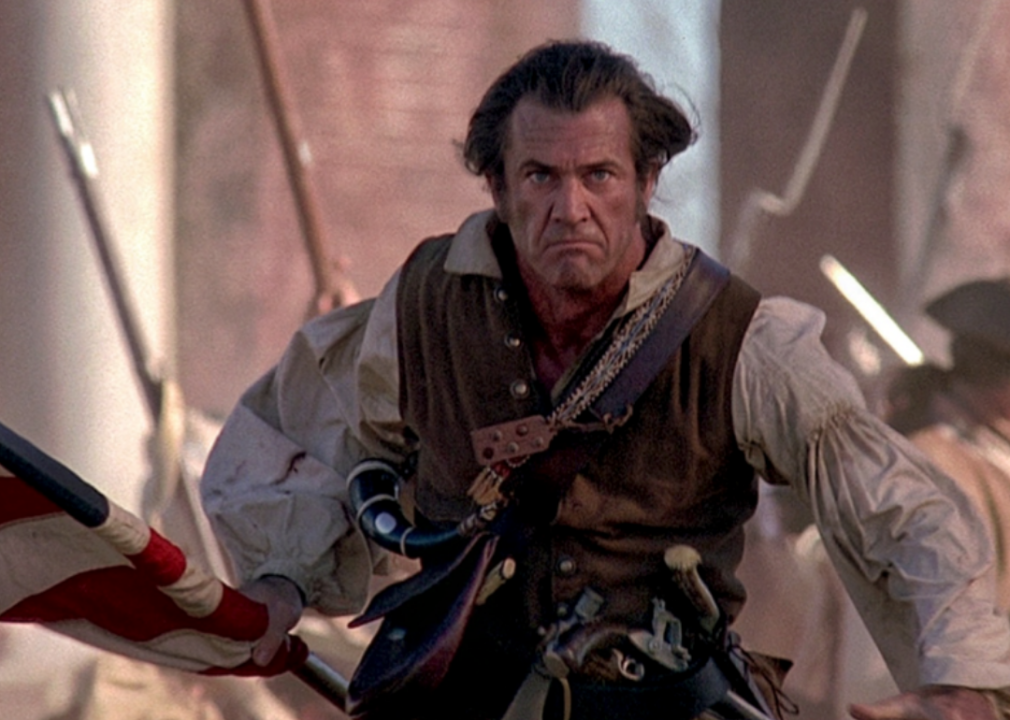 There aren’t many modern films set during the Revolutionary War, which makes “The Patriot” stand out all the more. The movie stars Mel Gibson as an American colonist who initially opposes the war but winds up getting swept up in the fight when a British officer coldly murders one of his sons. Heath Ledger, Christopher Cooper, and Jason Isaacs also have major roles in the period drama, which is primarily shot in South Carolina.

Although many details of the movie—the costumes and set dressings, for example—are reasonably period-accurate, critics have loudly pointed out that its overall depiction of the Revolutionary War is generally incorrect. They especially complained about a notorious scene where a church is burned down by the British with the colonial parishioners trapped inside—an atrocity that never happened. Still, if you can overlook the historical inaccuracies, the film is well worth a watch for the way it deals with the desire for pacifism in the face of war. 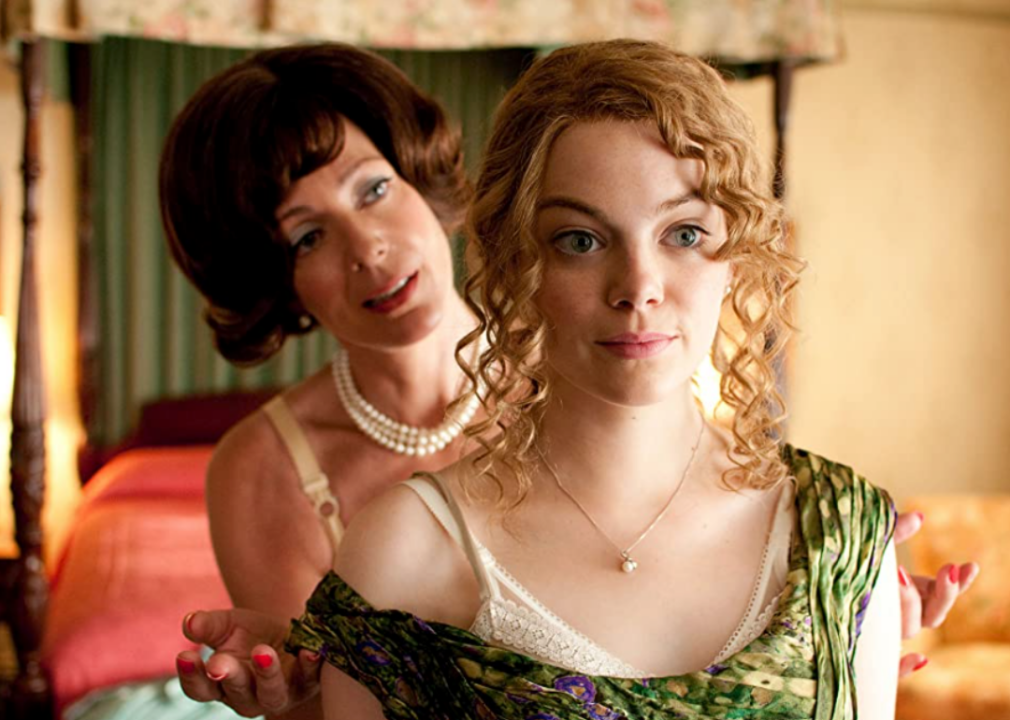 Based on a Kathryn Stockett novel of the same name, “The Help” is about the day-to-day racism Black people experienced in the South during the civil rights movement of the 1960s. The movie follows a young, idealistic white journalist as she befriends two Black maids and sets out to write a book exposing the poor treatment they experience at the hands of the families that employ them.

A host of extremely talented actresses lead the ensemble cast—Emma Stone, Viola Davis, Octavia Spencer, Cicely Tyson, Bryce Dallas Howard, Jessica Chastain, Allison Janney, Anna Camp, and Sissy Spacek, among them. Critically and commercially the film was a success, though a few detractors did point out that it has a strong white savior narrative and partially glossed over the true brutality Black domestic workers endured in the Jim Crow era. 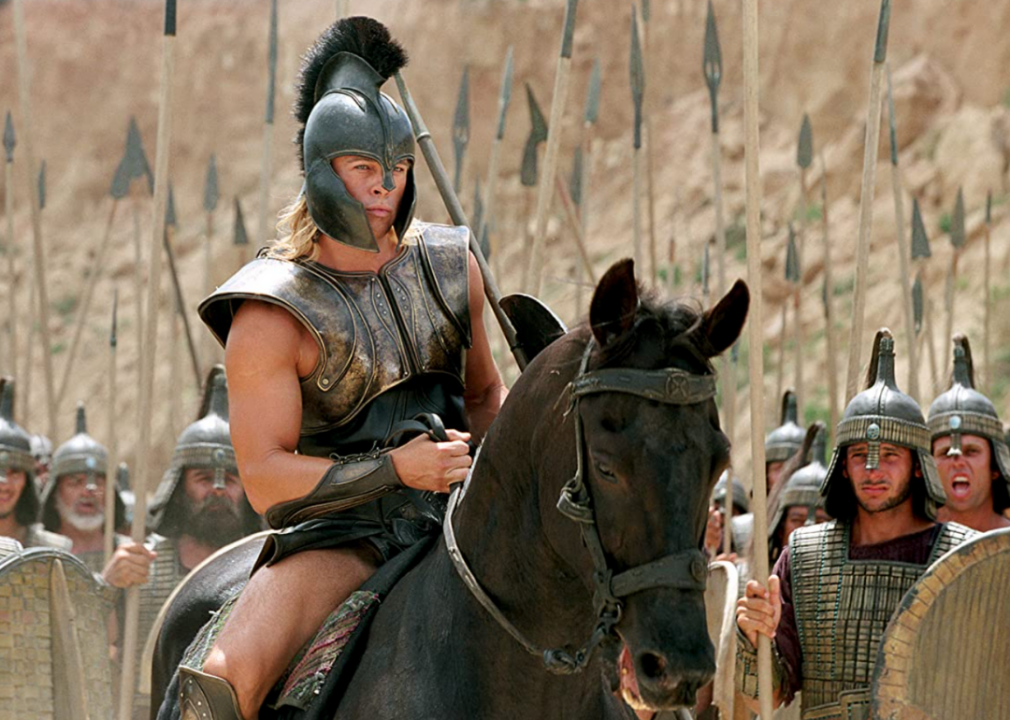 “Troy” is loosely based on Homer’s epic poem, “The Iliad.” Set in Ancient Greece, the war drama condenses the story of the decade-long fight between the invading Greeks and the defending Trojans into a two-week event. One of the highest-grossing films the year it came out, the movie earned a lot of publicity thanks to its ensemble cast that included Brad Pitt, Orlando Bloom, Eric Bana, and Diane Kruger.

Despite fans’ clear interest in the movie, some critics expressed their displeasure over its whitewashing of Homer’s bloody epic and how far it strayed from its source material. In the end, the divisive film was nominated for several awards, including an Academy Award for Best Costume Design. 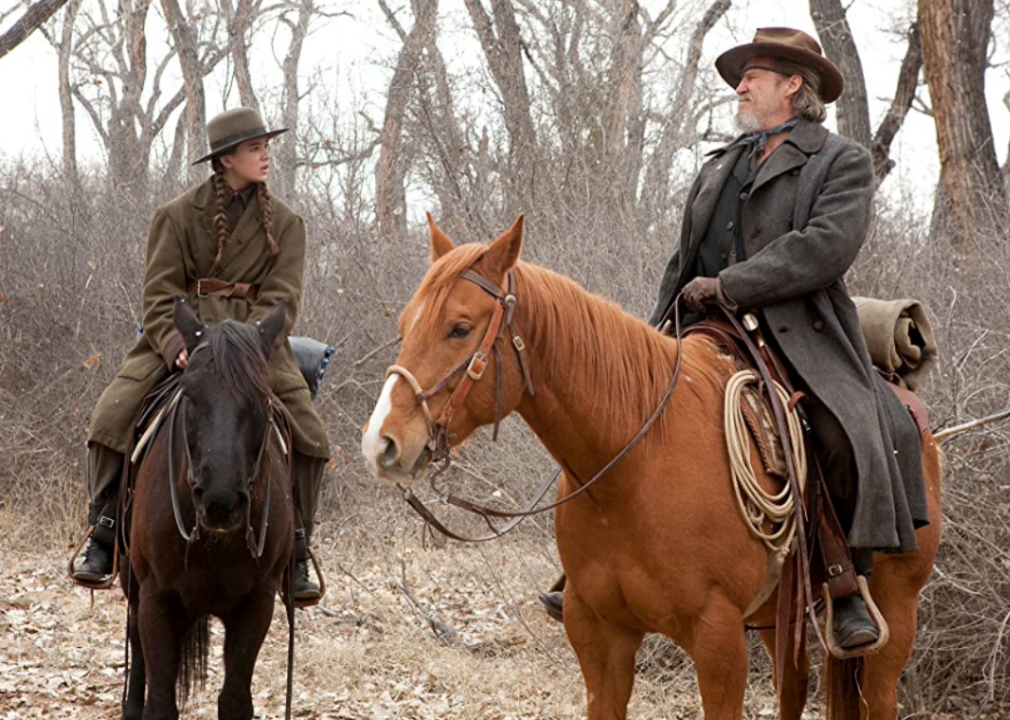 Another period film based on a novel, “True Grit” is a Western adapted from a Charles Portis book of the same name. Set in the late 1800s, the story follows a teenage girl who enlists the help of a gruff U.S. marshal and a Texas ranger to track down her father’s killer. Written, produced, and edited by the Coen brothers, the movie stars Jeff Bridges, Hailee Steinfeld, Matt Damon, and Josh Brolin. The movie was nominated for 10 Academy Awards—though it won none—and established Steinfeld as a respected and talented actress. 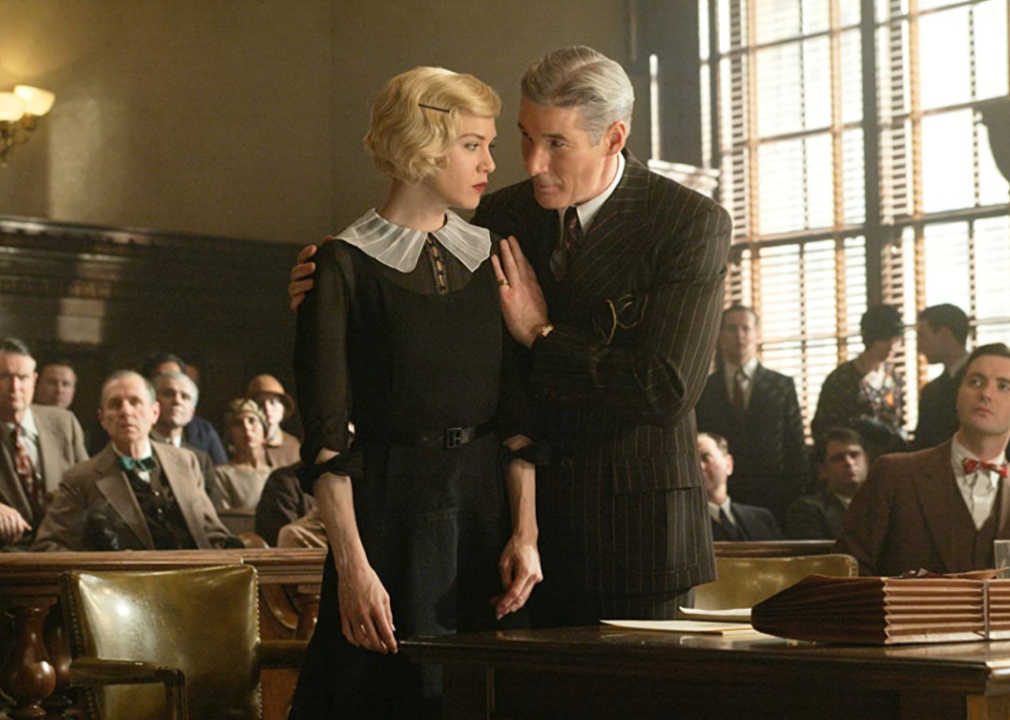 The second Catherine Zeta-Jones period film to make the list, the 2002 hit “Chicago” is actually a remake of a remake. In 1926, playwright Maurine Dallas Watkins first wrote the story of two rival murderesses based on two unrelated court cases she covered for the Chicago Tribune. The play was turned into a film in 1927, which then became a Broadway musical in 1975. It’s this well-known musical, set in the Roaring ’20s, that provided the basis for the 2002 Academy Award-winning film “Chicago,” the first musical to win Best Picture since “Oliver!” in 1968.

Zeta-Jones plays Vaudeville star Velma Kelly, who competes against fellow inmate and housewife Roxie Hart (Renee Zellweger) for fame, both of whom hoping that becoming well-liked will keep them from the gallows. 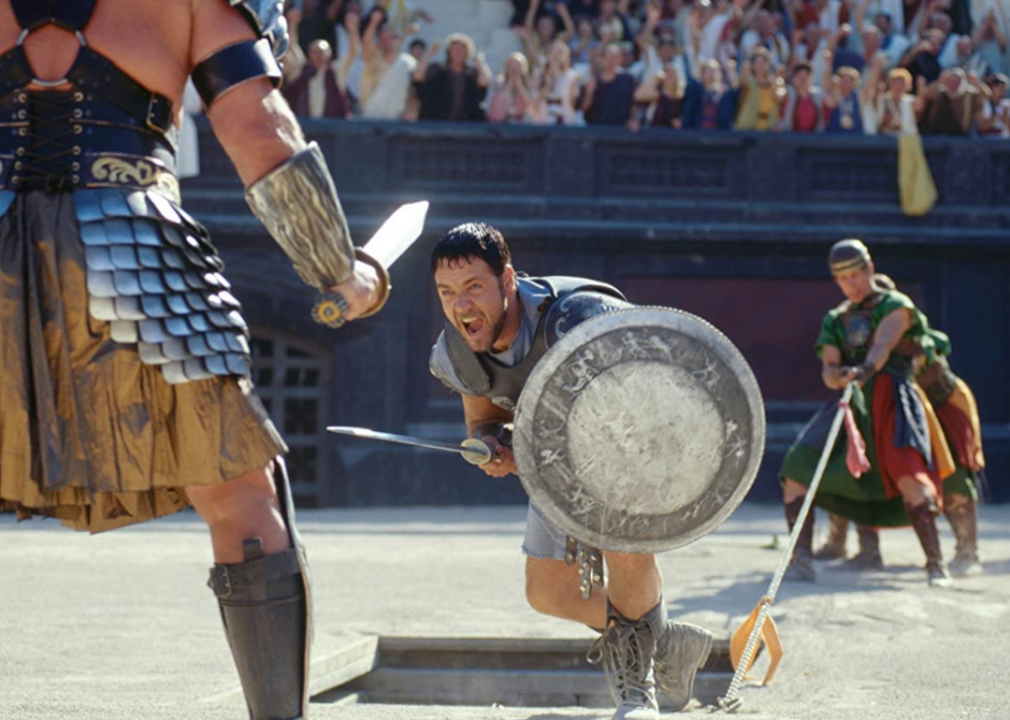 Set during the Roman Empire, “Gladiator” is about a respected general who is betrayed by an ambitious, patricidal emperor and sold into slavery, only to become a gladiator whose full focus is exacting revenge. This bloody, moody film was nominated for a slew of awards in 2000 and took home five Oscars including Best Picture, Best Costume Design, Best Visual Effects, and Best Actor.

In a Best Actor Oscar-winning performance, Russell Crowe plays the eponymous gladiator, with other well-known actors like Joaquin Phoenix, Connie Nielsen, and Djimon Hounsou rounding out the cast. Though the movie proved divisive among critics—with some loving its intensity while others complained that it took itself too seriously—nearly everyone could agree that the crew did an excellent job of ensuring the Roman Coliseum scenes were as historically accurate as possible. 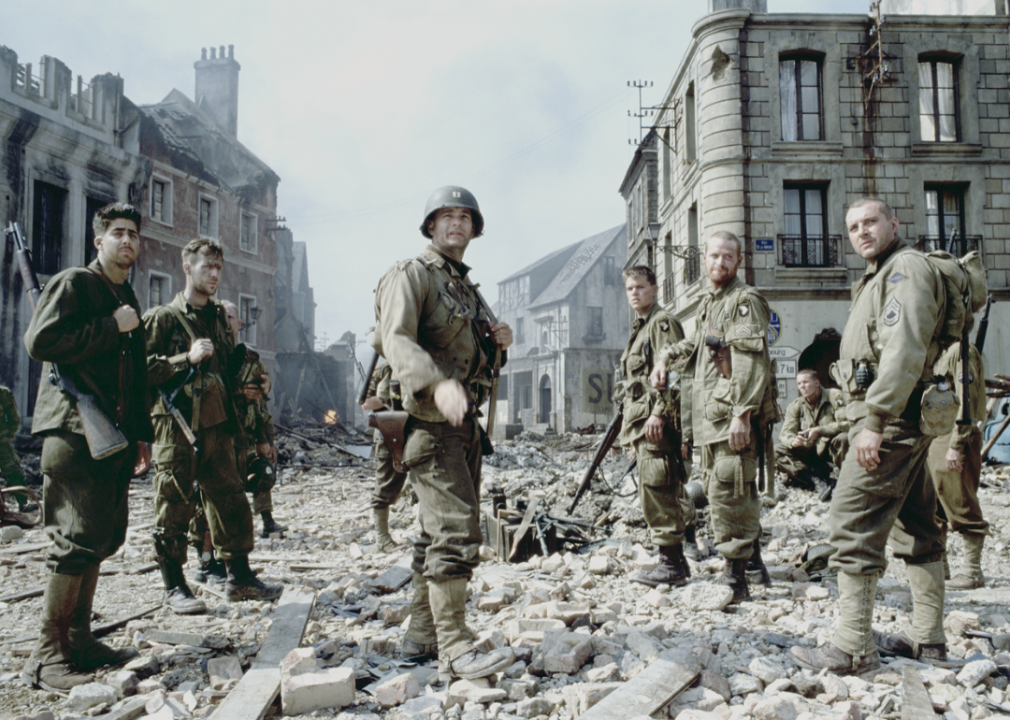 There are dozens and dozens of WWII movies out there, but “Saving Private Ryan” is arguably among the best. The film is set during the June 1944 invasion of Normandy and follows a group of U.S. soldiers who go behind enemy lines to save a paratrooper whose brothers have both been killed in action.

Directed by Steven Spielberg and starring Tom Hanks, Matt Damon, Edward Burns, Adam Goldberg, and Vin Diesel, it won the Golden Globe for Best Picture and was nominated for 11 Academy Awards. Although it was wildly popular, many viewers struggled with its graphic depiction of war in the opening Omaha Beach scene; it’s reportedly so realistic that it triggered PTSD among many veterans who watched it.

James Cameron’s epic romance “Titanic” is as much the story of the sinking of the ill-fated ship as it is a love story. The movie’s primary storyline follows Rose (Kate Winslet), an upper-class, marriageable-age woman who sets sail for New York with her mother and loathsome yet very rich fiancé. During the ill-fated voyage, she meets Jack (Leonardo DiCaprio), a penniless, good-hearted artist who won his ticket in a game of cards and is looking forward to starting a new life across the ocean.

Over the course of the film’s 195-minute runtime, these two star-crossed lovers fall in love, only to have their happily ever after destroyed by the vessel’s fateful collision with an iceberg. Nominated for 14 Academy Awards, “Titanic” took home 11, including Best Picture and Best Director. In 2012, after being rereleased to mark the 100th anniversary of the Titanic’s sinking, the movie became the second film to ever gross $2 billion in ticket sales.

Abortion in America: How access and attitudes have changed…